In KwaZulu Natal, South Africa, two thirds of children live in poverty, and all are affected by the HIV/AIDS pandemic. In 2004, Dr Julie Stone, a Perth-based infant, child and family psychiatrist, visited KwaZulu Natal, and returned determined to find volunteers to make dolls for the children in the districts she visited. From this has grown the Uthando Project, a WA-based charity that has sent tens of thousands of dolls to children in KwaZulu Natal, all made by groups of volunteer dollmakers. ‘Uthando’ means ‘love’ in the isiZulu language of the Zulu people in KwaZulu Natal.

KwaZulu Natal is one of South Africa’s most disadvantaged communities. There are well over five million people living with HIV in South Africa, which is more than any other country in the world. It is a living and persistent tragedy in a state where 40% of the population are young people under the age of 18.

We all know that caring for children can be complicated. In KwaZulu Natal, of those who have a living parent, 83% live with someone other than a birth parent. This creates a complex social and emotional setting within which families must survive and children grow, develop and learn.

In its book 100 Dolls, Countless hearts, the Uthando Project records that in KwaZulu Natal, one in four children below the age of 18 have lost one or both parents. It is easy to imagine how this throws up insoluble challenges for children and families.

From the beginnings of the Uthando Project, a number of community-based doll-making groups have formed spontaneously and with independent leadership. The Uthando Board and a core of volunteers support these groups. Volunteers can join existing groups, set up their own group or make dolls independently. All contributions are valued and encouraged. 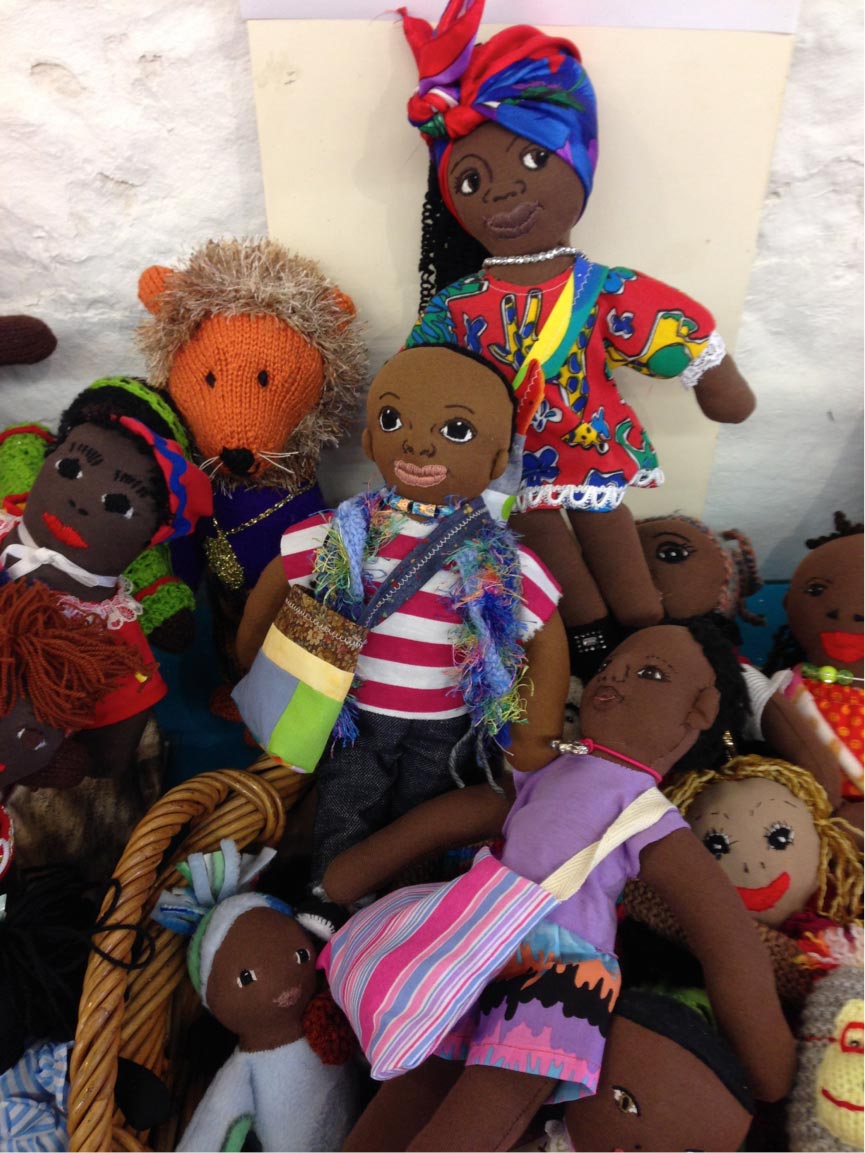 Western Australia is home to many groups, including one that grew out of a series of workshops at Fremantle’s Meeting Place on South Terrace in 2011, and another at the Fremantle Multicultural Centre.

Dollmaker Lynne Jones ran the workshops at the Meeting Place, South Terrace, Fremantle in 2011. The group that evolved out of the workshop now has 16 doll makers, and meets at the home of a member once a week. Members of this group often volunteer to help at workshops around Perth, for example in Harmony Week.

A newer group meets weekly at the Fremantle Multicultural Centre, again growing out of a series of workshops held last year. They meet on Monday mornings and are keen for the group to grow. Further afield, there are groups in Leederville, Sorrento, Kalamunda, Albany and Bunbury. There are also groups in Victoria and Tasmania.

According to Lynne, benefits from the dollmaking extend beyond the children receiving them – the women making the dolls also experience tremendous benefits and Lynne has heard lovely stories of transformation for dollmakers.

Lynne and other dollmakers from around Australia have made several visits to South Africa, to attend and run community workshops, visit partner organisations and distribute dolls. They pay all their own costs, and use their luggage allowance on as many dolls and sewing kits as they can carry. The workshops provide participants with the skills and materials to make dolls for the children in their care, as well as training in the nature of play and its essential role in children’s education, development and wellbeing. 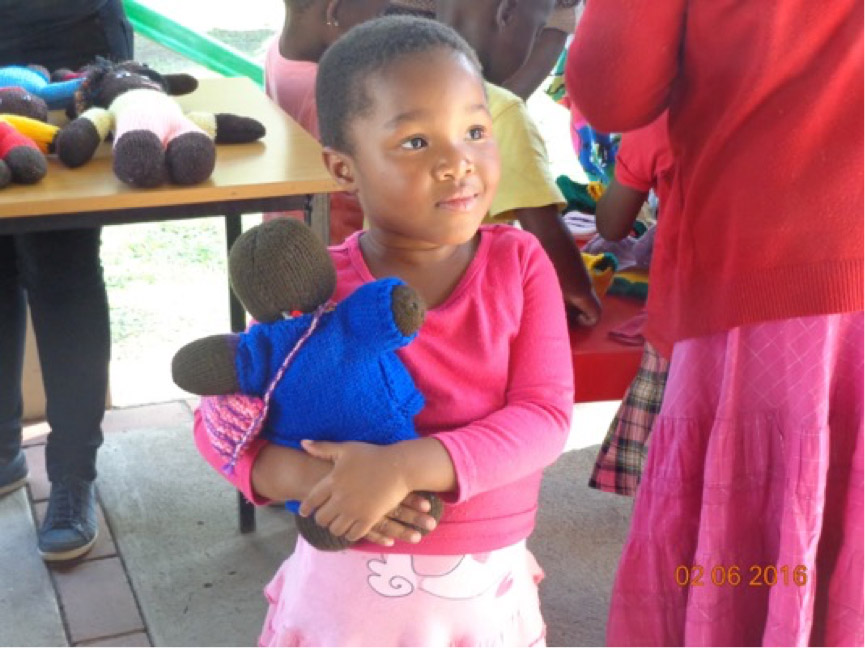 Back in Fremantle, Lynne and the other dollmakers hold exhibitions to raise awareness and funds for the project. Last year Kidogo Arthouse hosted an exhibition of dolls with a ‘world family’ theme, where dollmakers made families of dolls. Funds raised cover the costs of materials, admininstration and freighting the dolls.

Dolls produced in Western Australia are collected and shipped from Fremantle to the Port of Durban, Natal. When the dolls arrive in Africa, Training and Resources in Early Education (‘TREE’) takes delivery of the dolls and then contacts community groups for distribution. Based in Durban, TREE is an organisation passionate about early childhood education and it has responded to the HIV/Aids crisis by training 1000 women each year.

The Uthando Project works in partnership with five non-government organisations in KwaZulu Natal. Dolls are designed specifically to suit each NGO, and are used as part of the organisations’ work. Groups that receive dolls for distribution include: Dlalanathi, a small non-government organisation in Pietermaritzburg, bringing about sustainable changes to child raising; The Family Literacy Project, which provides basic literacy support to families in remote rural settings; Lifeline and Rape Crisis, based in Pietermaritzburg, it supports people affected by the HIV pandemic; and Sizabantwana, a group of staff from 45 primary schools giving each other mutual, practical support in caring for students and each other.

For the healthy development of children it is necessary that there are opportunities for play. These opportunities can be lost to children when families and communities are faced with extreme grief and poverty. The need for shelter, food, security and education are always paramount and play can be marginalised or forgotten.

The role of the doll is more than merely a toy. The Uthando Project acknowledges the value of play as a means by which children can better understand the difficulties and challenges in their lives. For adults or care-givers who have difficulty communicating with children, play can provide a context within which care givers find a way to engage and connect. Caregivers can use the doll to introduce difficult conversations with a child. The doll can also be a confidante or a ‘silent friend’, and can be used by the children in imaginative play based on events in their lives. Play with dolls can give children a better understanding of where they fit within a social group.

So far, the Uthando Project has sent 50,000 dolls as well as hand puppets and knitted toys and animals to KwaZulu Natal.

There are now many people, both in and outside South Africa, involved in the making and distribution of Uthando dolls. Since its beginning as a small grassroots organisation, Uthando has become an incorporated body and has recently been granted DGR (Deductible Gift Recipient) status to become a registered charity in Australia. All donations over $2.00 are tax deductible. Uthando is run with the help of a Board and many wonderful volunteers. Founder Dr Julie Stone is the Director of Uthando Project Inc, and creative artist Georgia Efford is the Co-ordinator.