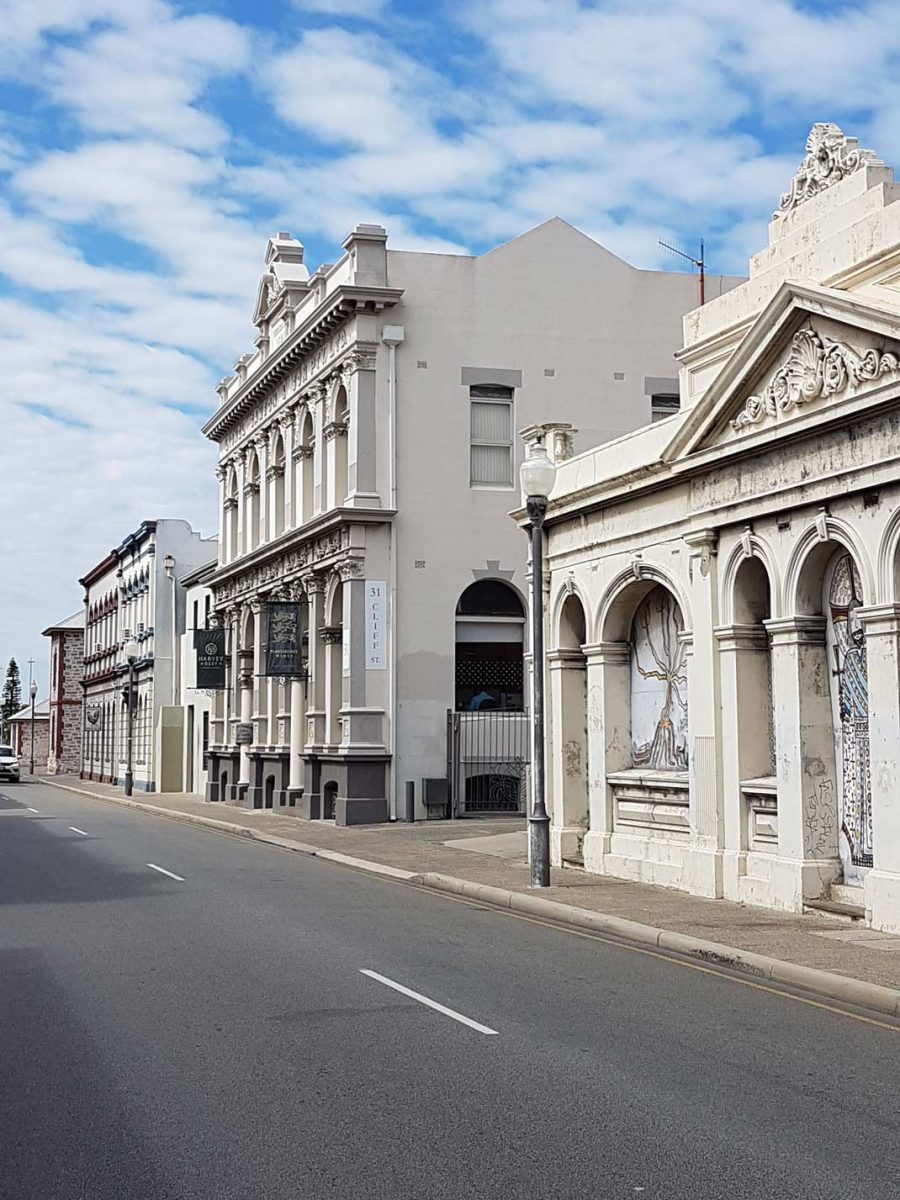 Croke Lane, Little High and Cliff Streets are the hub of my West End community, my back and front yard. My neck of the Fremantle woods takes in the Herald newspaper, the Maritime Museum Shipwreck Gallery, parking spaces used by UNDA students, Bathers Beach, the Roundhouse, Kidogo Art house and the eating houses of Bathers Bay and Fishing Boat Harbour. But there is also a thriving residential community tucked away among the inner city buildings and it is a great place to live.

My daily dog walks and strolls along neighbourhood streets supply much to see and encounter and the pleasure of many greetings and chats on the way. Croke Lane, Little High and Cliff Streets are relatively short streets but long on colour and activity. I’d like to take you on a stroll around this locality and these streets of Fremantle.

In Croke Lane the industry of the Herald newspaper is omnipresent, particularly on a Friday morning with people delivering, packing, parking, collecting and going. I relish seeing Caroline gathering her Heralds to distribute. She’s a kindred dog loving spirit I’ve come to know and she always hides a treat for my dog Rexy to seek as he sniffs past.

Fashion model or wedding group photo-shoots, commonly use the buildings as a backdrop, and musicians have also created their album cover images in Croke Lane.

There’s a smaller back lane off Croke, hangout of the ‘Back Lane Gang’. This small lane is not only a driveway for the Little High Street townhouses, but also a green oasis of lushness amidst the inner city concrete thanks to the talents and energies of Sally. There’s also a bountiful (and handy) lemon tree hanging into the lane from the back of the Samson’s building as well as a nectarine tree growing so well after its memorial planting in honour of previous residents, Karin and Mike, who moved back to England two years ago. At any time in the lane there is often one or a couple of the gang out watering, fixing, planting, chatting, being generally convivial and, on occasions, carousing! 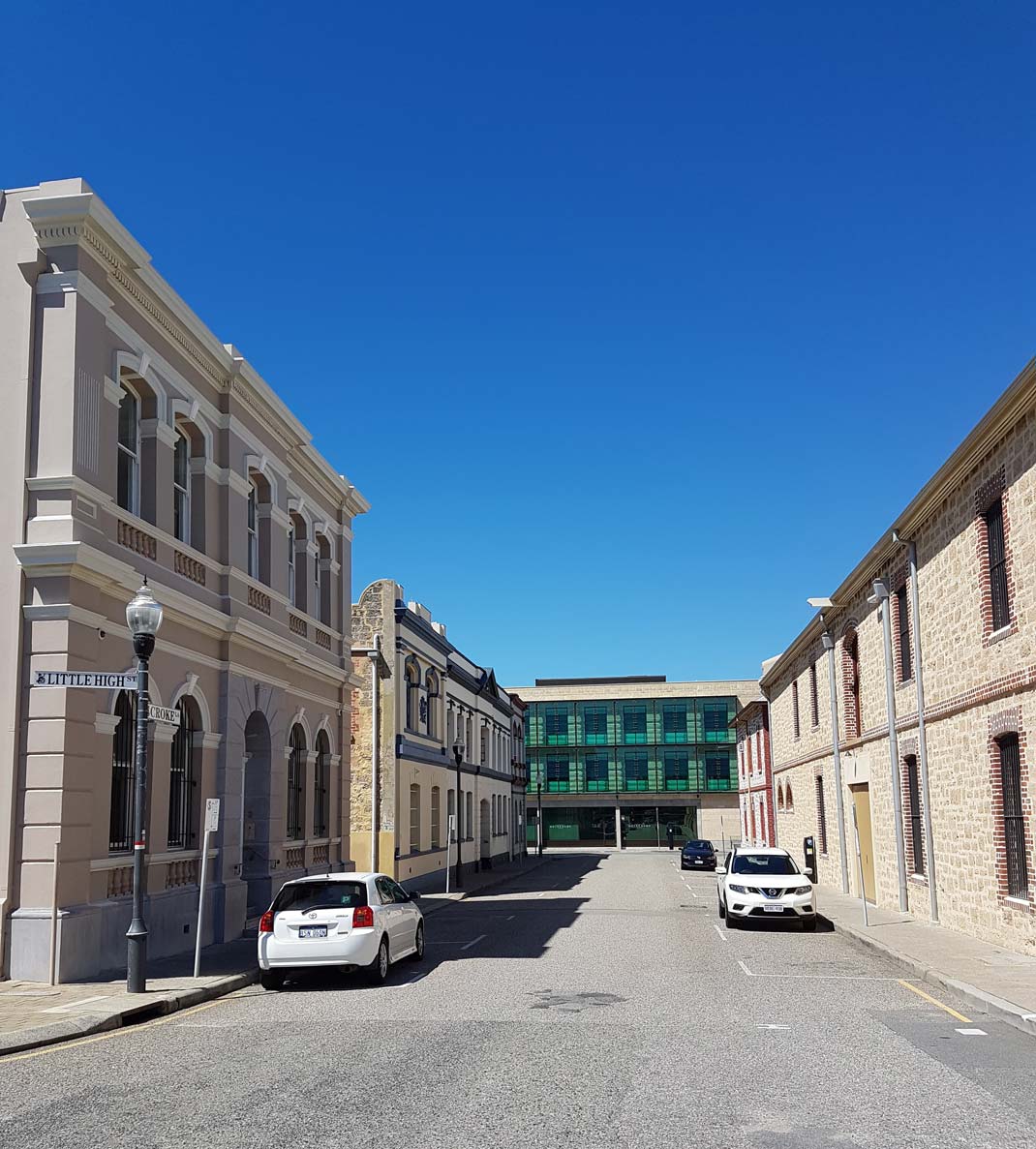 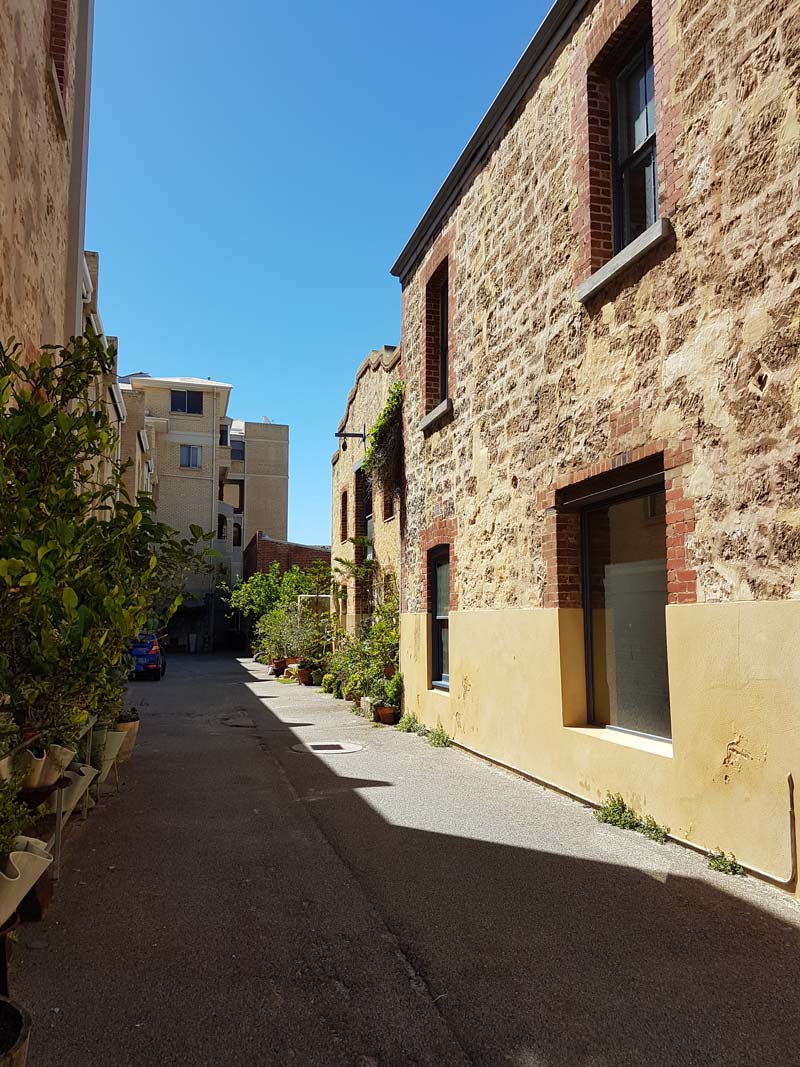 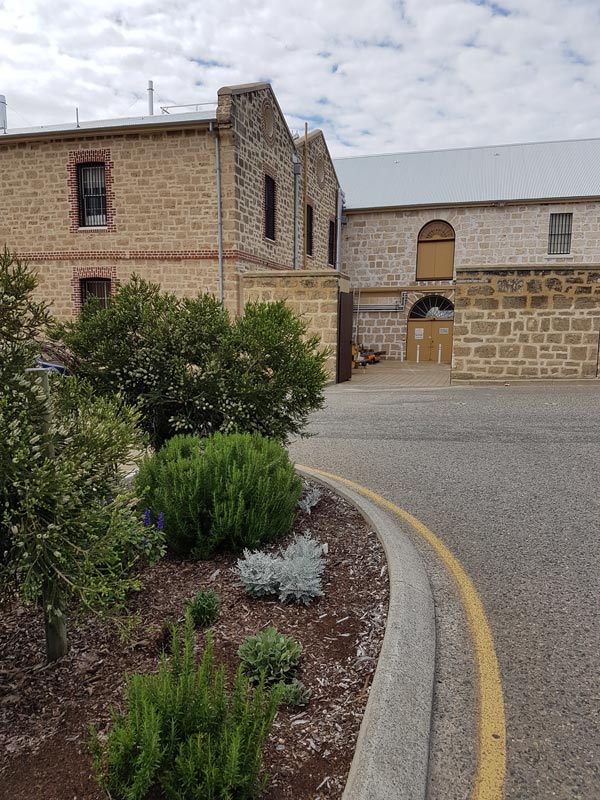 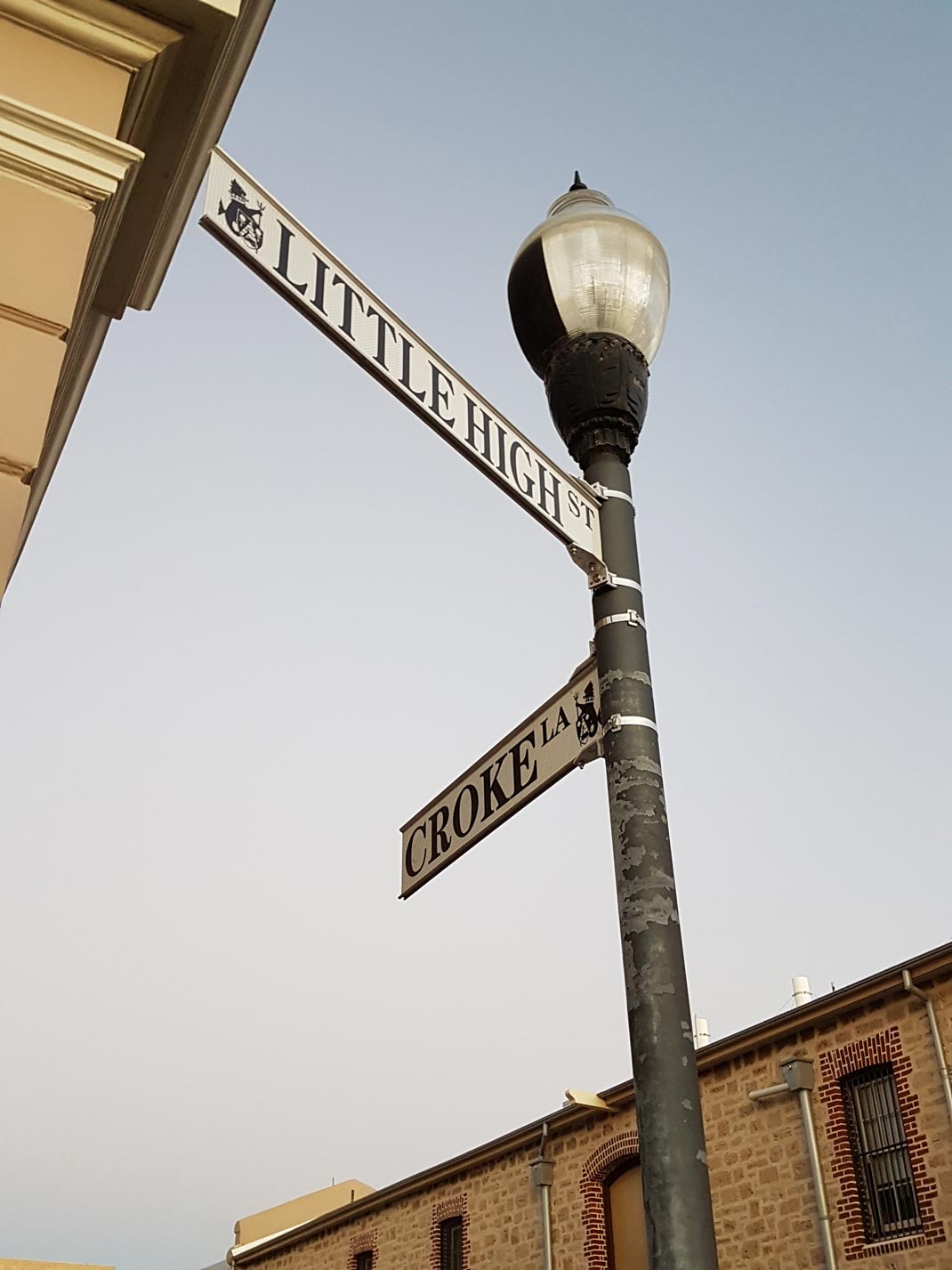 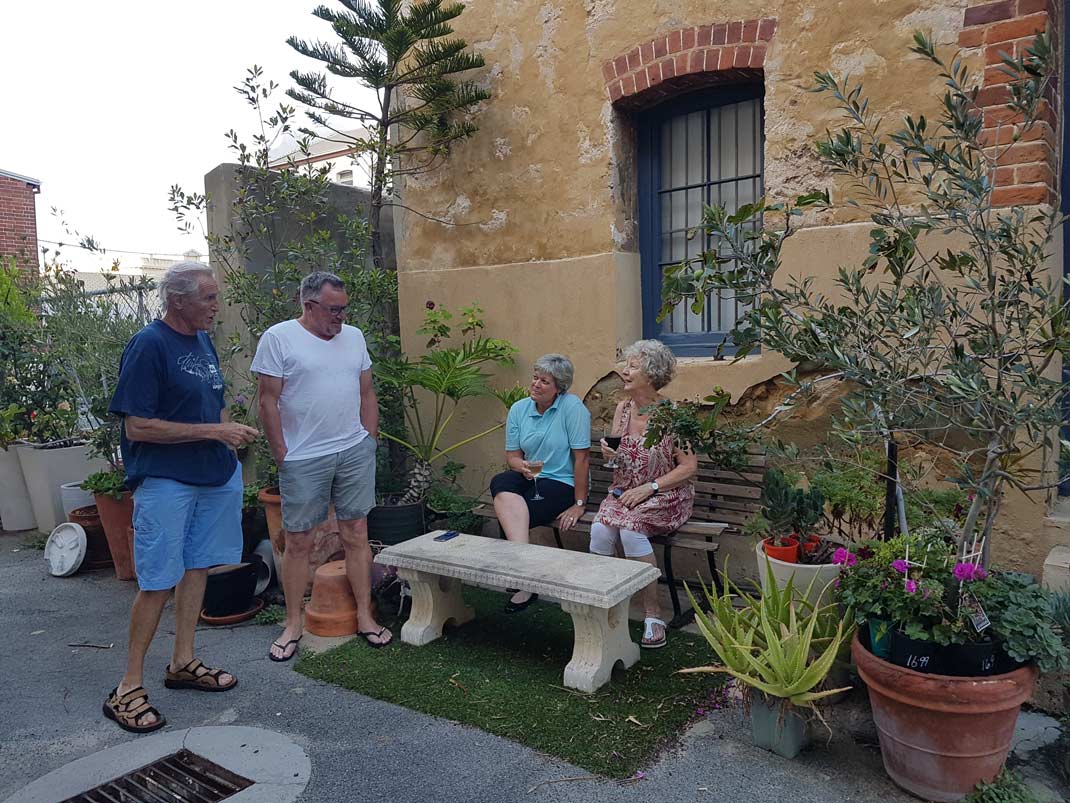 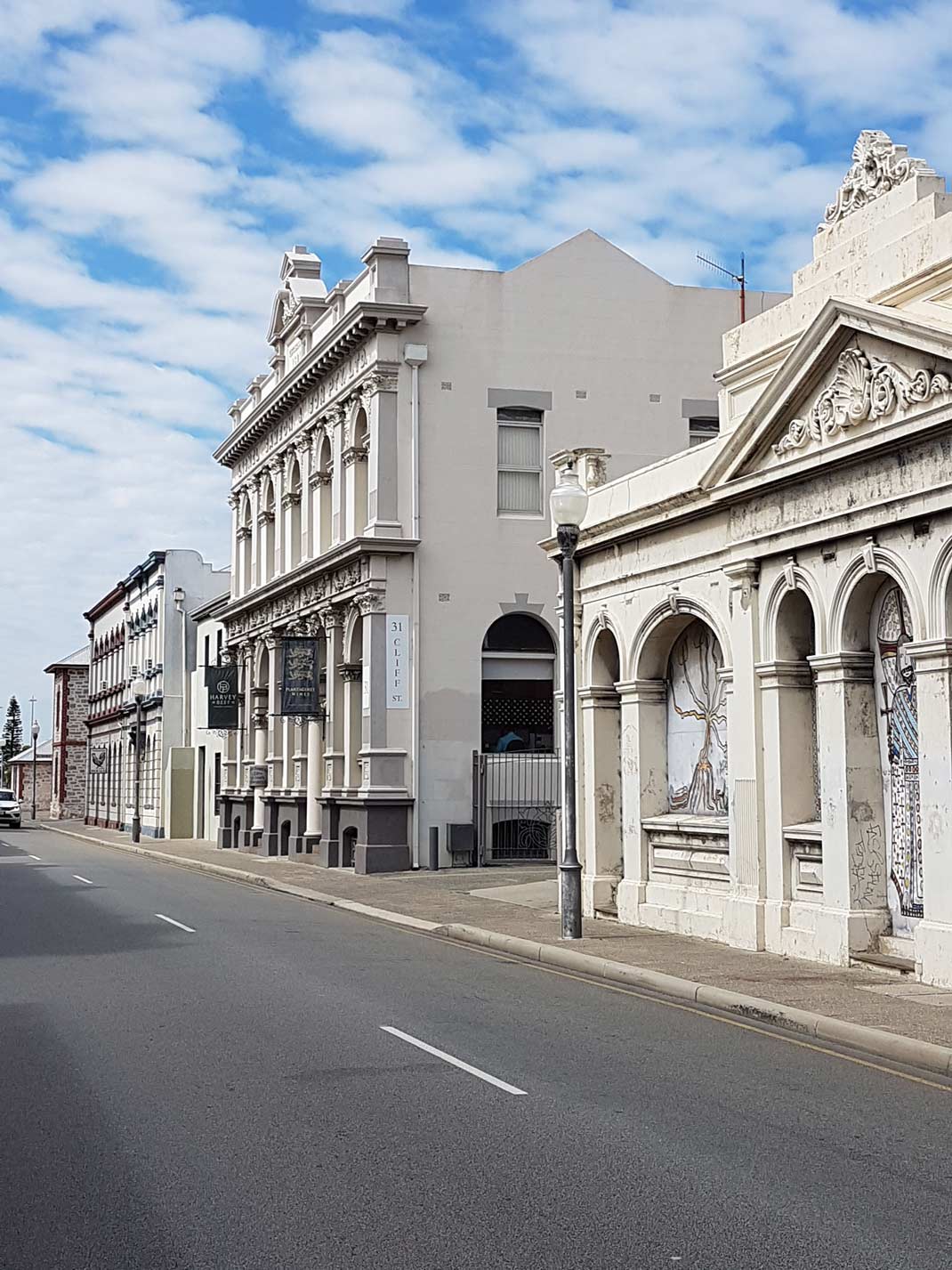 A morning stroll sometimes tunes me into a racket coming from the yards of the Shipwreck Gallery, the noise of machinery, perhaps a new installation being created or a vessel being worked on?

At ‘Crokes-end’ we turn the corner into Little High Street and there at our feet is the crescent-shaped nature patch recently installed by Council and coming along very nicely with the addition of Sally’s care and embellishment. Phew, reckon that pong means she’s just added dynamic lifter to the regimen!

I don’t cross over the railway line to the beach side this time – that’s the afternoon walk and a train is coming anyway. There are bike riders, pedestrians and cruise ship tourists zooming and sauntering along the footpath.

There’s Annie placing into the verge bin a bucket of rubbish she’s collected from the beach and bushes, and I wheel that feral shopping trolley off the road and tuck it out of the way.

Here comes Tracy, wrapped in a towel, back from a morning swim, nipping home for a shower.

I look up and see footy flags hanging out side by side on the next door balconies of two townhouses. Dockers v Eagles – Tony and Roy are flying their opposing colours again.

I pause to look at the Marina Village – Mum is leaning over her balcony giving a wave and a cooee.

Further on a film shoot is underway in the piazza intersection of Little High and High Street. The last one filmed in this area was Bran Nue Day. As I look along the front of the old Samson’s Bond Store apartments I wonder if Anwen and Charles are back from their trip and whether I’m likely to bump into them on our mutual night pre-sleep dog ablutions walk.

At Chalkies cafe, Keith, barrister par excellence gives me a wave but there is no time for coffee at ‘the local’ and it’s very busy anyway. UNDA students are back and I see a couple of academic types meeting over a cuppa.

Onwards and a right turn into Cliff Street. I won’t go left this time but do think of the elegant and magnificent new MSC building and recall the awe and splendour of the tour they recently gave to an inner-city residents group. I reflect on what a gift and endowment this company has made to Fremantle.

Over the road from the heritage facade on Cliff Street, Lyn is putting their bins out. I wave and she calls out across the street that the Laneway Festival was better this year than previously – no gatecrashers crawling over their fence and roof. I reflect what an intriguing space and home they have created at the rear of their original 1930s duplex. The Portuguese Consul used to be next door to Lyn but now a boutique surf shop occupies that unit and each time I walk past I wonder how business is for such a shop at this end of town.

I walk past the Samson’s building looking at the majestic edifice and look down past the wrought iron gate to their old stables building and the almost equally old lemon tree we benefit from.

Passing the Herald building I look over the road at the row of terrace houses, checking for signs of habitation in Max and Harriet’s and if they are currently back from Warburton. Someone is in residence in the short stay visitors apartment next door which some years back used to be Tim Winton’s office studio. There’s Dr Colgan’s former dental surgery, now beautifully converted and restored by Elizabeth into a handsome terrace house.

No visit to the Esplanade Park on this dog walk so as I finish ambling down Cliff Street and before I turn back into Croke Lane, my last look is at the UNDA Education building Tannock Hall, a useful addition to our area for public meetings and lectures. The ‘meet the candidates’ session will soon be on there in time for the State election.

There really is so much life in these three streets of Fremantle, always something going on!