From Here To Eternity – Via The Nullarbor With Evie #3

Slow walking Hurry Krishna* is driving a Hyundai Kona Electric car from her beloved Freo to far-away Sydney. Driving across the Nullarbor is an Australian rite of passage, usually undertaken by the young and the restless (HK says she is neither of those) and not often in an electric car.

In the first blog, she wrote of the trials and tribulations of getting ready for an EV journey across the Nullarbor. Then she grappled with Range Anxiety in the second.

In this third post she asks, So, what are you waiting for?! 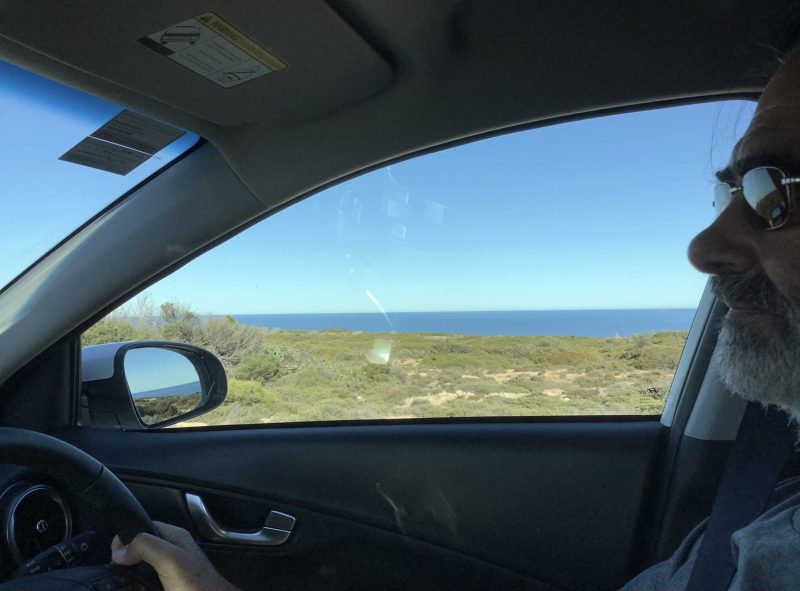 What is this that roareth thus?
Can it be a Motor Bus?
Yes, the smell and hideous hum
Denotes a motor bus!

There is no odious fume, nor the visceral grumble of the engine as your electric car glides over the well-maintained surface of the thousand miles of Eyre Highway from the empty eastern end of Western Australia to Port Augusta in South Australia. Your car is perfectly silent or filled with your favourite music. The white noise hum from the rubber on the road might put you to sleep but for the bone-rattling thunder of monstrous road trains every so often. 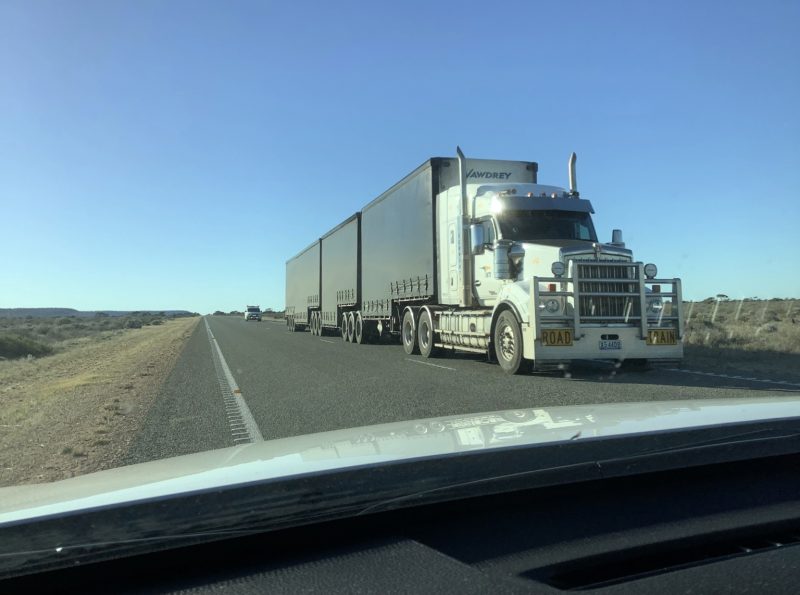 Having struggled with range-excitement on Day One, we settle into driving around 400 km a day, at about 10 km under the 110 km/ph speed limit on the wide open roads. The car is set to move at the most ecologically friendly mode that our KonaEV has to offer. Though the cold desert mornings dampen the range projection a little, on crisp sunny days we can do without any climate aides. So, most days, we seem to be getting around 430 kms on a 90%-ish battery. 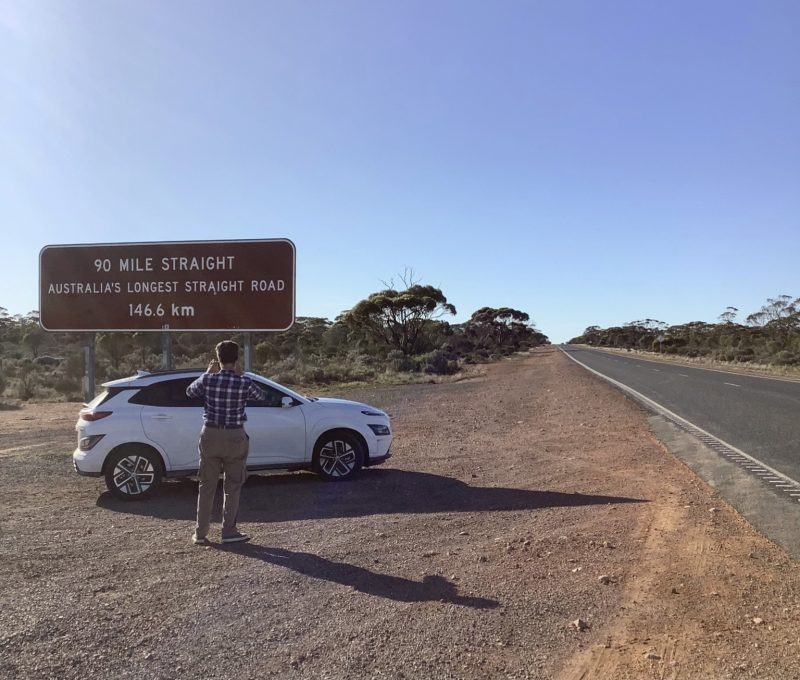 This road-trip has all the hall-marks of a pilgrimage. We are following in the foot-steps (perhaps I should say the wheel tracks?) of many who have gone before – doesn’t everyone of a certain age have a story of crossing the Nullarbor in a petrol-guzzling bomb some time in the late 20th century?

Like any great pilgrimage, this flat and featureless road has its own essential icons. The iconic ‘90 mile straight’, Australia’s longest straight road (though it’s apparently only the 11th longest-straight in the world – but hey, this is not a competition) brings us from Balladonia to Caiguna, which hosts by far the most important attraction for the EV-community: a 50 kw DC charger, fastest charger by far on the entire 1000 kms of the Eyre highway! 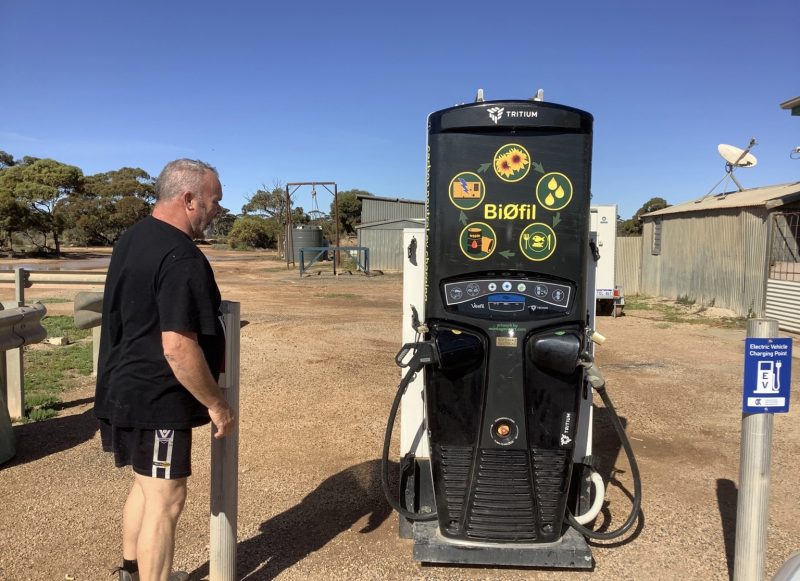 Fastest and most eco-friendly EV charger on Eyre Highway

The eco-aware EV drivers will be happier still to learn that this charger is carbon neutral, running as it does on the waste oil from all the fish and chips fried at the Roadhouse. For a flat fee of $50 you can fill up your car in an hour or two. More importantly, this might be the only place in the world, where you can feel virtuous while stuffing your face with battered fish, as you bask in the glow of saving the earth one french fry at a time. Not all chargers are quite so spectacular.

Two other relatively fast chargers at the Balladonia Hotel and at the Madura Pass Oasis Motel are connected to a research project led by engineers at the University of Western Australia (in case of any perception of conflict I should declare that I spent many happy working years at that university). Other charging options are mostly slower, generally three-phase plugs hidden out of sight behind a toolshed or in far corners of roadhouses, whose principle customers are, of course, still, the massive transport vehicles that enter these premises to engorge on fossil fuels.

Nonetheless, there are on the Eyre Highway, at least 10 points where we could charge our car – most are slow, so it is most practical to charge overnight, replenishing yourself and your car at the same time and in the same motel. And, best of all, given the very low numbers of EVs here, you are unlikely ever to have to wait in line. 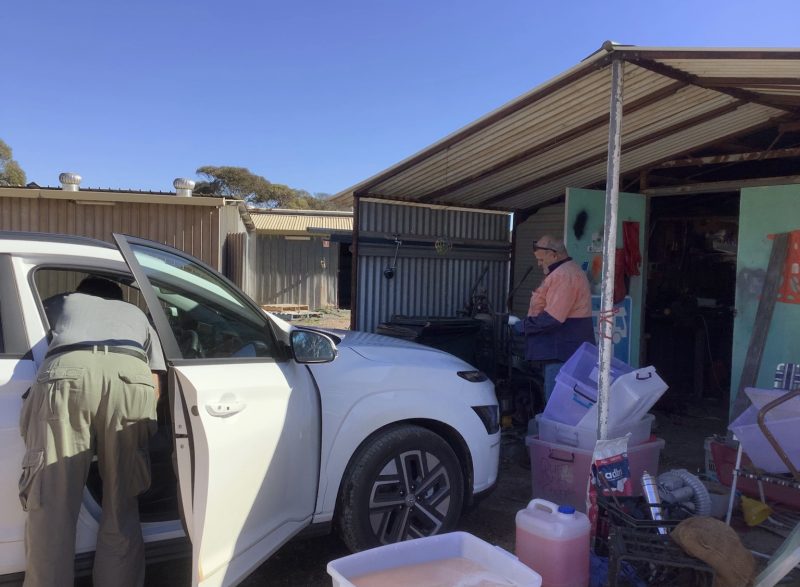 One of the many hidden nooks where we charged our car

We left Fremantle on the West Coast of WA on a Sunday. The following Sunday, having broken no speed records, we were in Port Augusta on the eastern bank of Spencer Gulf, South Australia.

We had driven just over 2,500 kilometres: some of it through the ancient fragile land of the Yalata people; much of it though vast central Australian Desert, the Nullarbor, named thus because the Europeans saw no trees, but which is in fact covered in low shrub.

We cross the Great Australian Bight, where the world’s ‘largest exposure of lime stone bedrock’ (ie, the Nullarbor Plain) plunges abruptly into the ocean. The road is a silver thread stitching together a haunting, implausible landscape of a greying desert and a green ocean. You can love this path in any car but you will do less harm in an electric one. 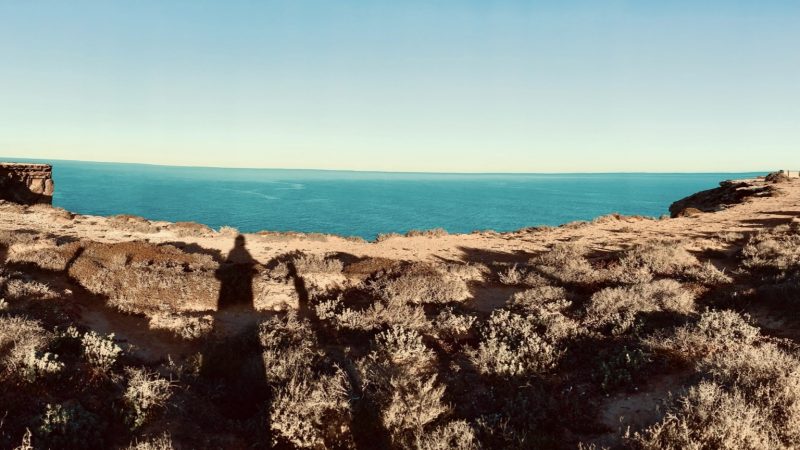 Where the desert meets the ocean

So… what are you waiting for?

If you’d like to read #1 and #2 of From Here To Eternity or Hurry Krishna’s other adventures available on the Shipping News look here, or visit her blog Reading the Road