Toast of the town enjoys a Black Swan showcase

Keep an eye out for more of Mark’s great reviews!

There’s a paucity of the theatre in Fremantle right now so lovers of the stage should jump on the train and head to the Northbridge home of our state theatre company, Black Swan, to catch Liz Newell’s warm and amusing, and award winning family comedy-drama, Toast.

Even though Toast was first performed in 2017 at The Blue Room, the Northbridge-based theatre that showcases envelope-pushing new work, Newell’s third play (after Belated and Alone Outside) utilises the familiar premise of siblings struggling to cope with the death of a parent.

Astutely, Newell changes things up by moving the drama away from the living room and kitchen and the usual cohort of family members and mourners drinking tea, eating biscuits and tearing strips off each other to the garage, where three sisters sift through and divide up their late mother’s possessions. 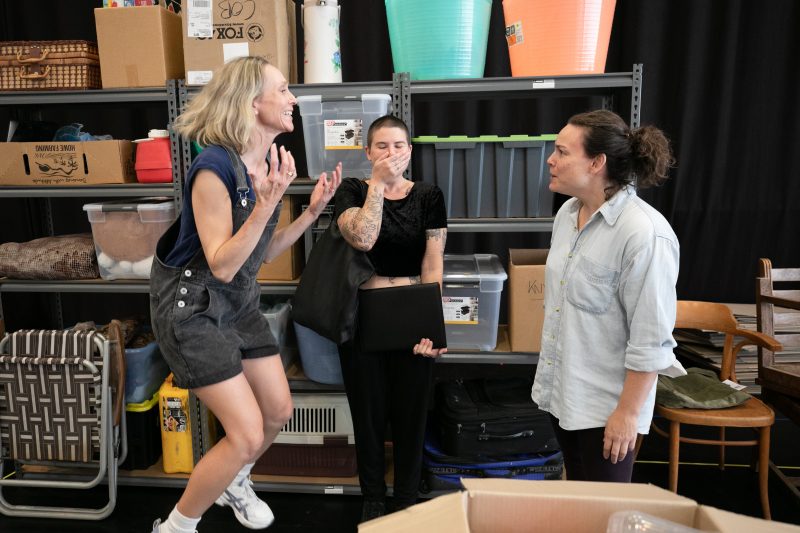 Oldest sister Candice (Alison Van Reeken), an officious professional type with a label-maker, has taken charge of the operation and keen to get things wrapped up and the home sold; middle sister Alex (Amy Mathews) is an alcoholic screw-up who has been on the wagon for several weeks so she’s not much help; while the youngest, Sydney (Sam Nerida), is pre-occupied with her first attempt at same-sex romance and cares little how Candice and Alex divvy up the boxes of Tupperware, electrical appliances and DVDs.

Into this increasingly tense situation stumbles real estate agent Gwen (Teresa Jakovich). Gwen is keen to sell the beautifully preserved home, which she keeps referring to as the “property”, while Alex is shocked that Candice is moving so quickly. “Stop calling it a ‘property’,” cries Amy. “It’s a home. It’s our home.”

Toast is at its best in the confessional moments when the women open up about their lives. Candice is struggling with an unfeeling husband who demanded they schedule her mother’s funeral around an upcoming business trip; Alex is grappling with the rage that is destroying all of her relationships, including with her sisters; and adopted Sydney wonders how she fits into the family now that the woman who took her in is gone.

Where Toast is at its weakest is the vague image of the recently deceased mother. Even though much of the play is spent sorting through her possessions we don’t get a sharp enough sense of her character and the ways she influenced her daughter’s lives (for good or ill) for the climax and catharsis to have real emotional impact.

While the mother’s lack of presence means Toast doesn’t resonate as powerfully as it promised, the three central performances are strong enough to hold our attention and Newell has a firm handle of delivering snappy yet meaningful dialogue.

Van Reeken gives Candice a lovely brittleness that suggests beneath her glamorous, controlling surface is a woman falling apart; Mathews drills down deep into the damaged psyche of a smart woman who is still to find her place in the world; and Nerida gives Sydney a sweet and very truthful mix of self-confidence and uncertainty that we sense is a part of most young lives.

When the three come together in the final scene and revelations pop up like the toast of the title – it’s also when the cast on opening night finally hit their stride – we get a glimpse of the much stronger work that is in the future of this clearly ambitious and talented writer.

Toast is on at the State Theatre Centre until May 15.