The beloved Irish musical Once leaps from screen to stage

The Black Swan/Darlinghurst Theatre co-production Once – the Musical doesn’t swerve too far from the original movie which, according to our reviewer Mark Naglazas, is a feckin’ lovely thing.

The charm of the 2007 movie musical Once is in the way writer-director John Carney used an unforced naturalistic style to tell the story of a melancholic Irish busker whose flatlining life and career is jump-started by a vivacious young Czech woman. It’s damp in Dublin but Singin’ in the Rain it ain’t.

So I was a worried that the stage musical version would pump too much stale theatrical air into Carney’s refreshingly delicate creation, giving it an overblown quality that would crush and kill the very qualities that made it a justly cherished gem.

While the busking element of the original is largely lost (including, sadly, the movie’s wonderful opening in which the hero chases down a thief who runs off with his meagre earnings) Once – the Musical is thankfully free of bombast and retains all the subtlety of the original.

Indeed, you need to listen carefully between the songs for the story, which unfolds so quietly and teases out its themes so subtly – specifically the seductive idea that love songs cannot easily be shaken free from the circumstances of their creation – you find yourself pondering the narrative long after you leave the theatre.

The musical (following the movie closely) begins with a memorable meet-cute moment, with a Dublin busker and vacuum cleaner repair man Guy (Toby Francis) catching the eye and the ear of a young émigré (Stefanie Caccamo) who happens to have a vacuum cleaner in need of repair.

Coincidences continue when the Czech “Girl” (she’s never named) reveals a passion for music and classical training on the piano. Before you can say Bono the pair are playing together, collaborating on songs and, most significantly, preparing to record Guy’s music with the help of their growing circle of musical friends.

While the set-up is straight out of the Mickey Rooney-Judy Garland “let’s put on a show” school of musicals it’s the restraint and the courage not to deliver the familiar romantic arc that keeps our attention between the songs, which are as stirring as you remember from the movie.

Guy wrote the numbers for a woman who broke his heart and left Dublin for New York, while the Girl is married, albeit to a man who’s returned to their homeland and unsure of their future. While the Girl adores Guy in secret – we learn about out it in a beautiful moment of pure theatre – the songs are so heartfelt it’s clear to her the wannabe rock star is still in love with his ex. 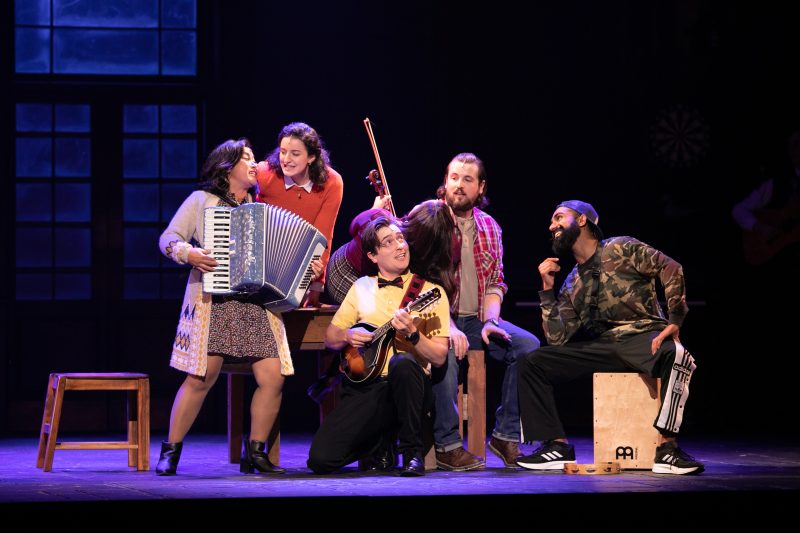 Those songs, of course, are the heart of the show and performed so exuberantly Once – the Musical could pass muster as a stand-alone concert. Each of the twelve cast members act, dance, sing and play musical instruments, giving the production a magical quality, as if it was not directed and choreographed but conjured out of the Irish mist.

Unfortunately, in moving from screen to stage Guy and the Girl’s musical circle has been fleshed out at the expense of Guy’s father and the Girl’s family. It launches an explosion of colour and humour – flamenco-obsessed music store owner Billy (Rupert Reid) is such a dynamic, hilarious presence he almost dances off with the show – but drains some of its emotional kick.

Nothing, however, can take away from the performances of Francis and Caccamo as Guy and the Girl. They work off each other beautifully in the non-singing sections of the show – her frankness and optimism are a lovely counterpoint to his uncertainty and despair – and they hit giddy highs when singing and playing together (the show’s signature song Falling Away had every heart at the Regal beating as one). 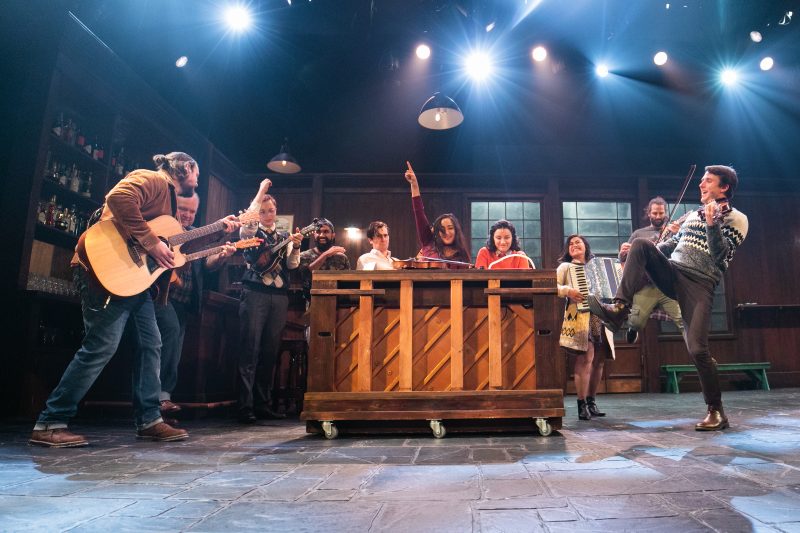 For the second half of the show I took a seat further away from the action. It revealed to me the beauty of Hugh O’Connor’s panoramic set, a pub that stretches from one side of the stage to the other and becomes a microcosm of “dear, dirty Dublin”, where drink and talk, music and poetry all unfold on one grand stage.

Bloomsday is coming up (June 16) and this heart-warming, marvellously fluid production is perfect preparation for Ireland’s other national holiday. James Joyce will be jigging in his grave.