What’s In A Name? – ‘Massage Parlour’

The Freo Council has before it an application for approval for a change of use from Office to Shop of an existing 75m2 commercial tenancy, on the ground floor of a mixed-use building at 284 South Terrace in South Fremantle.

Here’s the site with its existing signage. 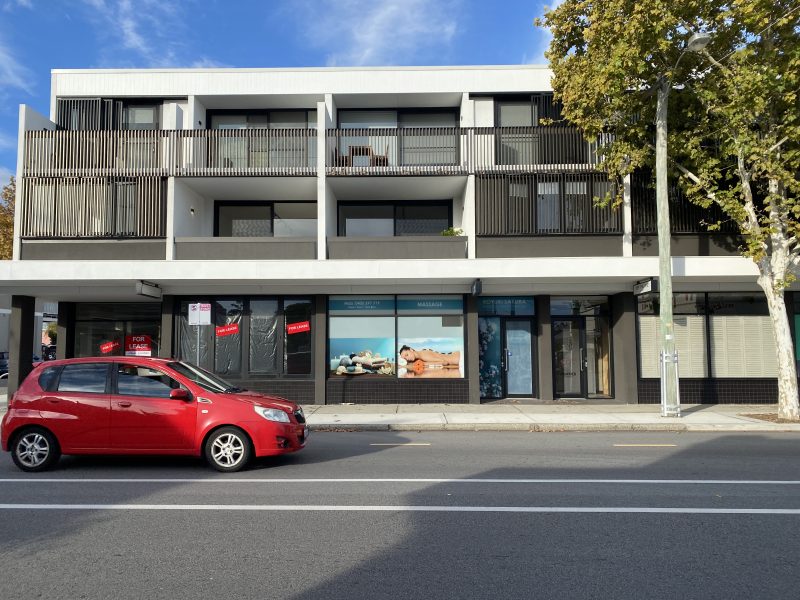 The application returns for consideration by the full Council at its next meeting on 25 May 2022.

In the meantime it has been from the Council to the State Administrative Tribunal, SAT, and back.

One of those tricky applications.

Plainly a massage parlour is not an Office, but it seems it is a Shop. Thus the application to change the use category.

The original proposal lodged last year included:
• Changing the approved use from Office to Shop so that the tenancy can be occupied for a Massage Parlour.
• Opening hours of 9am – 8pm (Monday – Sunday).
• Maximum of 2 employees onsite at anytime.
• Window signage 100% of windows.

The Council’s Planning Committee made a decision to refuse the proposal on 1 December 2021.

The applicant then opted to lodge an appeal with SAT.

Following a SAT Mediation, the applicant submitted an amended application with Council on 8 April 2022.

As it transpires, the land use definition of a ‘Shop’ under the City’s LPS 4 is: ‘A premise used to sell goods by retail, hire goods, or provide services of a personal nature (including a hairdresser or beauty therapist) but does not include a showroom or fast food outlet.’

The City’s planning officers have advised the Council that uses such as massage parlours and tattoo studios, as well as hairdressers, beauty therapists and nail bars have been consistently interpreted by the the City as falling within the ‘services of a personal nature’ component of this definition since the gazettal of LPS4 in 2007.

The original proposal was advertised in accordance with Schedule 2, clause 64 of the Planning and Development (Local Planning Schemes) Regulations 2015 (the Regulations), as it involves a use which requires consultation prior to obtaining approval and the application also involves a car parking shortfall. The advertising period concluded on 20 September 2021, and five submissions was received.

The following issues were raised –
• A massage parlour is inappropriate for this site;
• The land use will result in carparking issues for the locality which is
already under significant pressure and will impact local residents;
• The mix of Shops to small office offerings is also a concern, don’t think the
area needs more small shops,
• Bylaws of the strata should prevent this use,
• Concerned with the area becoming a ‘red light district’,
• Concerned that the community consultation signage was done correctly,
• Noise generated by the use is of concern,
• The City has made no provision for new car parking facilities in the locality to cater for more parking demands, and
• The present business at 2/284 South Terrace seems to operate at night-
time when there is already a competing demand on car parking in the entire locality from existing hospitality businesses in the immediate vicinity.

The applicant submitted the following response (as summarised in the report currently before the Council):
• Concerns associated with an alleged illegal activity occurring within the premises need to be pursued with the Western Australian Police as the City doesn’t have the jurisdiction to investigate or enforce such matters. The applicant’s representative has also confirmed in writing that the business is not to be used for prostitution. Notwithstanding this, while anecdotal commentary has been provided by the community, there is not considered to be sufficient evidence to refuse the application on the basis of it potentially being an illegal use. As the use has not recommenced pending the outcome of this application, there is also no opportunity to review the operations.
• With regards to strata bylaws and enforcement of these provisions, this is a matter which would need to be pursued under Strata titles legislation which is not enforced or administered by the City.
• The City notes that the applicant will be advised the development will need address current acoustic requirements and must comply with the Environmental Protection (Noise) Regulations 1997.

As noted, the City’s planning officers have provided advice that confirms the ability of a Massage Parlour to be considered a Shop.

The officers have also advised that they consider the proposed land use of Shop is consistent with the objectives of the Mixed-Use zone for the following reasons:
• The proposed Shop could make a positive contribution to the Mixed Use zone, complementing existing uses, and adding vitality to the centre.
• It is considered that the change in use would not be significantly detrimental to the amenity of adjoining and adjacent residential properties. The proposed use will cater for a limited number of patrons at any one time not only by limiting the floor area of the tenancy, but it also is to have a maximum of two staff working at any time. In light of the modest size of the unit and the stated nature of the proposed business, it is considered that the potential for significant adverse impact on the amenity of residential properties can be appropriately managed.
• An appropriate advice note is recommended to be included alerting the owners to the requirement for compliance with the Environmental Protection (Noise) Regulations 1997 (as amended).

Noting the objections received to the proposal previously, the applicant has proposed that they be issued with a 12 month approval. This would enable them to demonstrate that they are a genuine massage business and that their impact on the community in regard to parking is not significant. At the end of this period, the applicant would need to submit another application for approval or cease operations.

As to parking issues, the City’s planning officers have advised they consider the relaxation of parking requirements under clause 4.7.3 of LPS4 is appropriate for the following reasons:
• The total shortfall of onsite carparking remains unchanged from the already approved Office tenancy as per the original development approval for the site, being 1 bay. There are 2 car bays allocated to this unit in the strata plan, meaning they are not intended to be used by anyone other than the occupants of this tenancy (or visitors to).
• The site is surrounded by a number of publicly available parking bays (detailed below) and it is considered that the nature of the business is such that the turnover of occupants would be appropriately staggered over the opening periods of a business day due to nature of service and the one-to- one customer to staff member ratio typically experienced in these businesses.
• The immediate locality is occupied by a number of hospitality venues and residences, which typically demand greater parking after daytime business hours. To restrict the impact on the local community, reduced hours of operation are now proposed in the amended application to be limited to 9am-7pm Mondays to Thursdays inclusive, 9am-6pm on Fridays and Sundays and no opening on Saturdays. It is noted that although the existing approval of Office would have contemplated slightly less hours per day it does have the same shortfall of car bays when assessed against LPS4 requirements, so limiting the business to the amended proposed hours would assist in managing the impact on the locality.

On the issue of signage, the planning officers noted that, following the SAT mediation, the applicant has opted to reduce the signage. The signs will be modified to occupy 47% coverage, enabling some level of casual surveillance into and out of the business. A condition is recommended to ensure the existing window sign be modified and reduced to a maximum coverage of 50% of the existing window area onsite for this tenancy to allow for an acceptable level of casual surveillance and interaction with the street.

In light of this advice the City’s planning officers concluded that aspects of the proposal which vary the statutory planning requirements are considered to appropriately address the relevant discretionary criteria of the Scheme and Council policy. Accordingly, the amended proposal is recommended for approval, subject to conditions.

At the recent Planning Committee meeting, rather than see the Planning Committee determine the application there and then, Cr Jenny Archibald requested the item be referred to the next Ordinary Meeting of Council. This was seconded by Cr Geoff Graham.

And so the matter returns to Council on 25 May.

What’s in a name? Lots, apparently!