In this article Elizabeth sheds light on the Central School (Miss Susan Hancock) in Cantonment Street that Ruby attended for many years.

My grandmother, Ruby Mitchell, left us some lovely photos of her schooldays.

The girls are wearing clothes that look very high maintenance compared to today’s school uniforms and everyday clothing. I assume the photos are of pupils from Central School, as that’s the school Ruby attended. 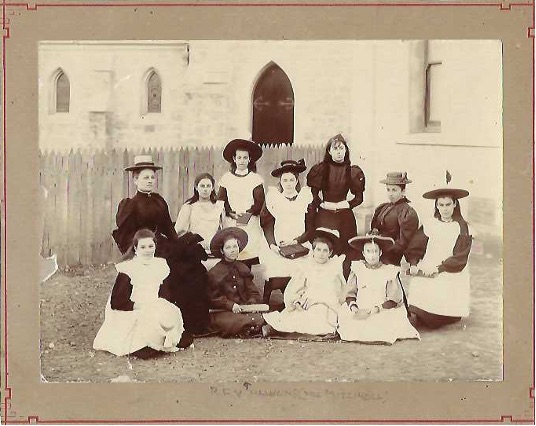 The small group of girls, seemingly of varying ages, in each photo suggests that the school was small.

The school was run from the Wesley (Methodist) Hall in Cantonment Street, Fremantle.

Classrooms on either side of the Hall were added in 1896. The first photo above shows what appears to be a church behind the fence. The words on the foundation stone are not legible unfortunately.

Schools were determined for the purposes of the Education Act as being efficient in reading, writing, arithmetic and spelling. 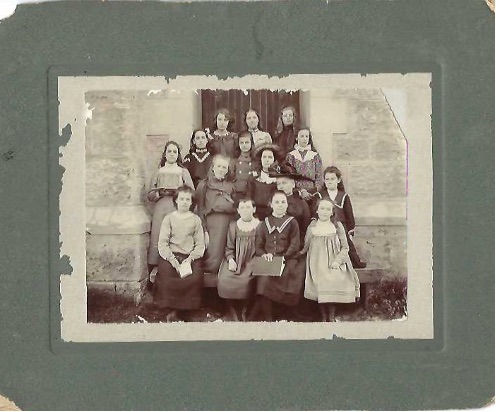 Photo produced by Buckley & Bell, Fremantle, on reverse side.

The year it closed was Ruby’s 17th year. Ruby’s education was complete. She had won prizes for geography and mapping.

Staff Ruby remembered, other than Miss Susan, were Miss Sarah, Minnie, Mary and a fourth person, the housekeeper. Miss Hancock said that she was also assisted at different times by her four sisters.

The students Ruby recalled were her younger sister Ivy, Florry and Daisy Sendy, the Duffield girls, and the Hicks girls. The Hicks family, High Street drapers, had a house on Canning River. Ruby apparently visited on her bicycle.

Drama was part of school activities and was on display at prize-giving evenings, as recorded in reports of these events. ‘An amusing representation of “Jack and the Bean Stalk” in character by a number of the pupils concluded the entertainment.’ ‘The proceedings closed with the National Anthem.’ The following year, ‘An attractive programme, including songs, part songs, recitals, and an operetta entitled “Little Prit” was carried through in a manner that won the hearty applause of the audience.’ 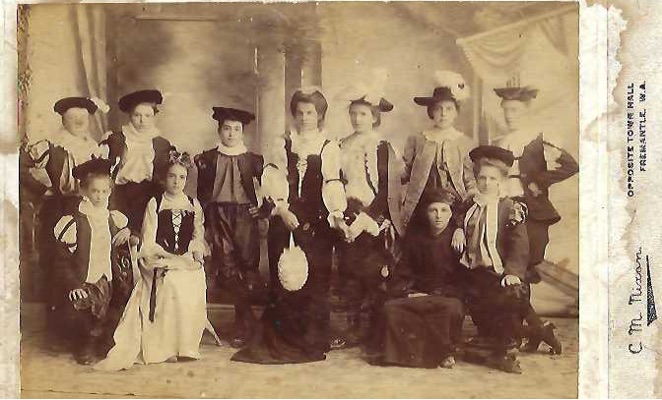 Ruby in Afghan(?) attire front row, second from right. What was the play?

Sunday School was at the Fremantle Boys School.

Miss Susan Hancock was born in 1859 in Cliff Street, in what was then known as the Commissariat buildings. She was one of five girls all of whom remained unmarried. They had one brother who did marry.

Miss Hancock’s father came to Fremantle in the early days of the Swan River Colony, and upon retirement from the Imperial Army taught with Sir Henry Briggs at the Fremantle Grammar School in High Street. His obituary notes that he was one of the founders of the Fremantle Literary Institute and was a life member of the Mechanics and Working Men’s Institute.

Susan spent most of her adult years working in or running schools. Before opening the Central School she had taught for five years at Bishops Girls School, conducted in the Cloisters in St George’s Terrace, Perth, and before that, at Bunbury from 1887 to 1890. After the Central School closed, she ran a school in Attfield Street, Fremantle from 1905 – 1928.

Properties in Attfield Street mentioned in the Hancock sisters’ death notices were 58, 60 and 64. A foundation stone to be found today on the front of 60 Attfield appears to relate to a new front for the houses at 58 and 60 Attfield St. It names the property as St Ursula’s Convent and was laid in 1969.

According to the website of the Catholic Archdiocese of Perth, the Ursuline Order of the Sacred Heart was founded by M Maddalena Molinari in 1575 in Parma, Italy, and introduced to Australia in the Archdiocese of Perth from China by M Assunta Franzelli in 1952. First communities established at Guildford and Wandering Brook. As an aside, St Ursula was officially removed from the general calendar of saints in 1969 since the story of her sainthood is apparently difficult to substantiate.

I have found very little detail on the Attfield Street school, however the following letter to The West, titled A Dear Little Letter, is very much of the time:

1 Oct, 16.
My Dear Aunt Mary, I have joined the Silver Chain on Sadie Nixon’s card, and also my little brother Bruce aged 6 years. I am aged 7 years and eleven months. I go to Miss Hancock’s school in Fremantle. I hope I will be able to do something useful for the Silver Chain. We are both very glad to become links in the chain.
I remain, your loving niece, Kathleen Mitchinson.
P.S.-Bruce also goes to school. He started last Monday.