Perhaps, as suggested by JWC Cumes in a most readable review of leisure times in early Australia, Their Chastity was not too Rigid, a society reveals itself as much by the way it plays as by the way it works.

My late grandmother, Ruby Mitchell, left us some very good childhood photos. Some were of her early school days at Miss Hancock’s School, conducted in the Methodist Church Hall in Cantonment Street, Fremantle. Some were of her hockey team. I was impressed that Ruby played hockey all those years and social norms ago and wanted to know more.

​The WA Hockey Association’s website, as of 19 December 2016, in its account of early 1900s women’s hockey, referred to ‘rough hockey grounds’ often being ‘matched by robust players’. I wrote to them taking exception, on behalf of my grandmother, to this description of her and her teammates! 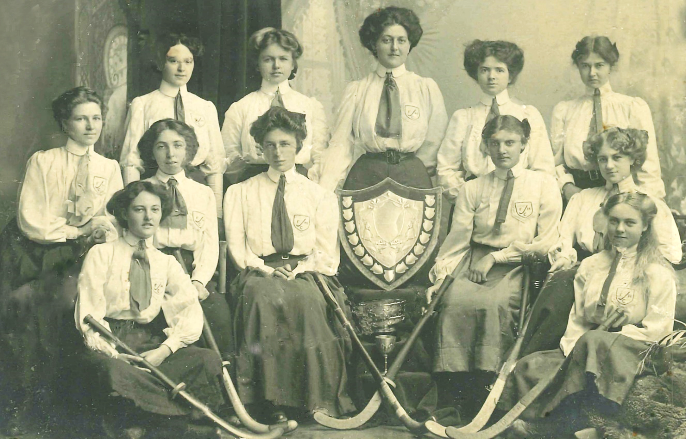 The Association’s current website, as of January 2022, now refers to ‘enthusiastic and robust’ players. Hmmn. I again reacted defensively on behalf of my grandmother and her teammates. I needed to look elsewhere. To find out more. I found my way to Trove.

In the Fremantle Courier newspaper of 11 June 1902​, I discovered that, in these early years of hockey, the ladies hockey clubs were Fremantle, Perth, Guildford and Bunbury.

A team called Wilberforce, based on the Hamersley farm outside York, was also mentioned infrequently, as was Cottesloe.

As I further delved into Trove, I discovered games between Bunbury and Perth or Fremantle teams were played at Pinjarra. Presumably there was a heavy reliance on trains, the Fremantle-Guildford line, via Perth having been opened in 1881, and the Perth-Bunbury line in 1883.

The Pinjarra oval was the ground of choice for Bunbury games. For the Fremantle team, I imagine this involved a train to Perth, then to Pinjarra, followed by two games involving the first and second elevens, afternoon tea and then a return trip – a long day, particularly given the speed of the trains. Some games were held mid-week. Perhaps there were fewer trains on weekends.

​The Fremantle second eleven hockey team of these years would seem to have been very successful, having regard to newspaper reports of the day. One win, reported in 1905 in The West, was against Bunbury. The Fremantle Vs Bunbury first eleven game was a draw. Some Bunbury players were reported as ‘conspicuous for good play’.

Prior to the first eleven game, the second eleven teams played. ‘Miss Tickell scored two and Miss Mitchell one of the goals credited’ to the victorious Fremantle team. ‘Afternoon tea was partaken at the hall at the conclusion’.

From the notes on her life that Ruby left us, I think this team won the Miss Best Cup in that year, with Ruby as captain. The following year, 1906 they won the Hackett Shield, a bowl and a cup. 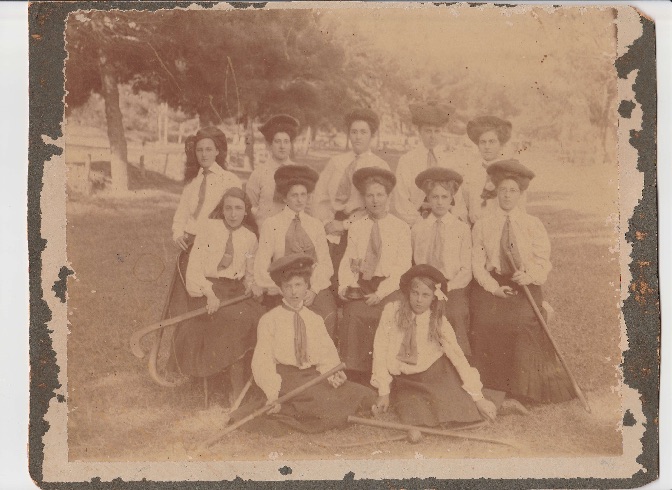 ​This team received some favourable media coverage. ‘The Best Cup now seems pretty certain for the Fremantle Ladies’, reported The West on 21 July 1906. However, it then added:
​‘The Perth ladies have made a very good start in the Hackett Shield matches and should make it a matter of considerable difficulty for Fremantle to uphold their possession of the trophy for another season’.

​A 1906 article titled Hackett Shield Matches stated that the play of the Misses Betty Clifton and Iris Moore was ‘distinctly above average’ in a Perth Vs Fremantle game.

Fremantle won the Miss Best Cup from Perth, 2-1 in 1906. A report in 1908 stated that the cup was ‘won outright by Fremantle last year’, although this appears to be at odds with the following 1907 report:
‘On Friday last Mrs. Francisco, … and Miss Daisy Sendy were at home to the members of the Fremantle Ladies Hockey Club, the occasion being a farewell to the Dr. Hackett shield, which after being won last year by the Fremantle Club, has this season been secured by the Perth Ladies’ Club’.

​Fremantle held an end of year break-up at Fremantle Oval where a number of ladies and gentlemen of junior and senior teams attended practice play followed by informal social tea served by the ladies. Mrs WD Moore presented the cup which the junior team had ‘won by their skill in their several matches which they contested vigorously’.

‘Miss Ruby Mitchell, Secretary’, was called upon by Mrs Moore to assume custody of the trophy for the ensuing year. Miss Mitchell very diffidently responded to cries of speech, thanking Mrs Moore for the cup, and saying ‘she thought the girls had fairly won it’. Another player called upon to respond for her team was reported to speak ‘blushingly’. Other trophies, details unreported, had also been won by Fremantle that year.

​Another club social event, a dance at Victoria Hall, was organized by the Fremantle junior hockey girls for friends and members. The Senior Fremantle Hockey Club arranged to present them with a small souvenir for ‘the excellent manner in which they had played in the season’. The brooches distributed to the team were a small hockey stick.

Ruby’s photo appears on the front cover of Simon J Nevill’s book Perth and Fremantle, Past and Present. She is wearing a hockey stick brooch.

​The Fremantle team, I understand, included Ann Moore and Iris Moore/Boultbee. Of the players pictured, I am only certain of one name and face, that of my grandmother Ruby Florence Victoria Mitchell, who later married Percy James Hawkins.

​There seem to have been number of sponsors of women’s hockey in these early years if the naming of cups is an indication. The games played for the Hackett Shield were to be played only in Perth.

Bunbury decided to stay in the Miss Best Cup competition only, a replacement for the Lady Bedford Cup.

The Miss Best High School for Girls was presumably the new sponsor.

It also seems that Perth was the victor over Cottesloe in the Moore Cup. 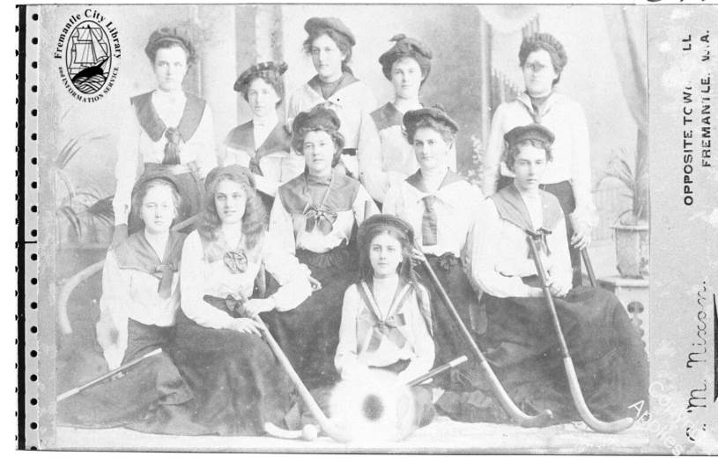 Fremantle Ladies Hockey Club, c 1910. In the centre of the back row is Hilda Bessie Hammond. Second from the left in front is Eileen Tickell and Gertrude Marion Hammond is second from the right. Hilda and Gertrude were daughters of C H Hammond. They lived at Lenaville (corner of High and Ord Streets) and later at Penshurst in View Street, East Fremantle. Query: Perhaps the first eleven?
Fremantle City Library History Centre, photo ref number 3499 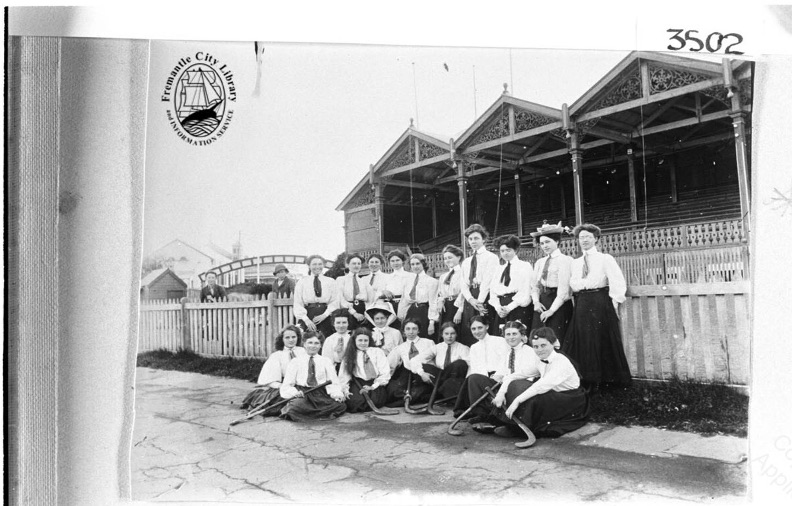 ​
While this last photo is dated 1897, the earliest report I have found of a women’s hockey game was June 1902, and another on 3 August that year. The latter, won at East Fremantle Park by Fremantle over Perth, was reported in The Umpire as ‘a very pretty and fascinating one, … witnessed by a large number of spectators’

​When you regard these fabulous old photographs of the Fremantle women hockey players, you appreciate how genteel they were. Rough and robust aren’t descriptions that readily come to mind! They show young women in their hockey uniform, consisting of a white, long-sleeved shirt, a tie, some wide, some narrow, frequently with a tie pin, and a waisted, smooth, dark, full skirt. The initials embroidered on the pockets of their shirts are FHC, presumably Fremantle Hockey Club. Their hair seems elaborately pinned, particularly by today’s standards, with only one young woman allowing some of her hair to cascade over her shoulders. Those shoes discernible beneath a full skirt display a firm toe.

​While the uniform style, inevitably, has changed since then to reflect today’s expectations of efficiency, so too has the design of the stick. Ruby’s team used a stick with a wide J-curve, rather than the very narrow base of today’s game, presumably reflecting contemporary practice in England.

​Afternoon tea was generally supplied by the ladies, no matter who was playing. One instance showing some acknowledgment of this was at a game between Fremantle and Wilberforce. ‘A nice little spread’ was provided at half time by five gentlemen fittingly attired in ‘Mother Goose’ aprons!

​The Fremantle Hockey Club was to hold its AGM at the Federal Hotel on 24 April 1906, according to The Evening Mail of 19 April 1906. Were women expected to attend, either in a hotel or otherwise or to nominate for committee? Where hockey AGMs were reported, the committee was all male with one exception. It may be that women’s hockey AGMs were not much reported. Of interest to me, the YMCA hockey club existed at least by 1911, when Mr PJ Hawkins (my grandfather) was elected secretary. He was re-elected the following year, the year in which he and Ruby married. Did Ruby and Percy, a Maylands resident, meet through hockey?

​And who were the reporters of these events? The reports were either unauthored notices or written under pseudonyms such as ‘Goal’, ‘Sticks’, ‘Centre forward’, ‘25’ and ‘Inner Right’. One wonders whether any of the reporters were women. Perhaps, but I didn’t find a named female sports journalist during these early years.

Indeed, it is appropriate to end my story about my grandmother, and of ​women and hockey, in the first decade of the 20th century, with an amusing reminiscence that appeared in The Daily News of 4 March 1905:

‘At an entertainment given at Wellington Mills, Mr. Yelverton said that many years ago, when at school in Fremantle, he was a member of the school dramatic society — one of the first, if not the first, of its kind in the State. At that time, for a ‘lady’ to take part in amateur theatricals was considered highly improper. There were many things which were ‘considered highly improper’ for ladies in bygone days. …in Pickwick, the ladies don’t skate — they only look on. I am not sure when it was first discovered that a lady could drive alone in a hansom without contravening any of the Ten Commandments, but I can remember the time when it was considered rather ‘fast’ in my native town for a grown-up girl to be seen sculling a boat or riding a tricycle — the days of ladies’ bicycles were not yet. It is perhaps needless to add that in those primitive times athletic women didn’t play hockey in public. There was no hockey, except for men and boys, and there were no athletic women, though, some of them put a lot of driving power into the croquet mallet. I suppose there must have been a time when even croquet was considered ‘unwomanly,’ but I don’t recollect it’.