Home 2022 April 16 Beyond the Urbanality: Liz Barker’s Photographs are a Vivid Celebration of Perth’s Manmade Landscape

Beyond the Urbanality: Liz Barker’s Photographs are a Vivid Celebration of Perth’s Manmade Landscape

There is no denying the persuasion of a well-considered photograph – it unearths something greater, conveying more about the scene or subject than what is captured visually.

Along those lines, Liz Barker’s current exhibition at Picarda in Fremantle, SomewHere: Dispelling the myth of Perth’s Urbanality, is much more than just an exploration of the local urban landscape. Drawing upon the west coast’s deep blue skies, vibrant light, and vivid colours, along with the city’s unique sense of openness and lack of clutter, these photographs offer an intimate encounter with the city’s heart and soul. 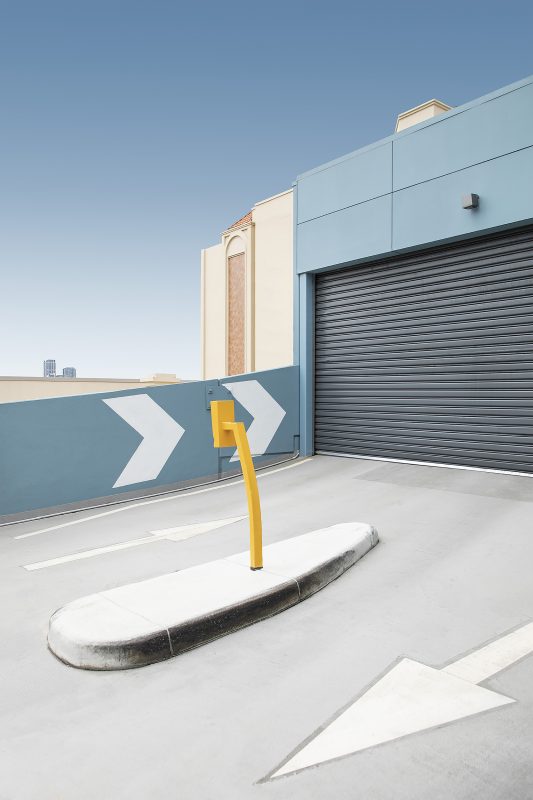 Urban landscape photography has a long and distinguished tradition. With the likes of Stephen Shore, Lewis Baltz, and Henry Wessel defining the genre, a subsequent generation of photographers including Grant Mudford, Jeff Brouws, and more recently Gerry Johansson, Jason Lee, and Lisa Guerriero, furthered the cause. Much of this work embraces the stylistic anonymity of the New Topographic movement, which arose as a reaction to the romanticism with which photography had previously viewed the landscape.

But the pendulum seems to be swinging back again, particularly here in Australia. There has traditionally been a dearth of Australian urban landscape photographers. Aside from Grant Mudford – who predominantly works in the United States – it was the likes of Max Dupain and David Moore that typically documented Australia’s urban scenes, but often only as part of commercial assignments. 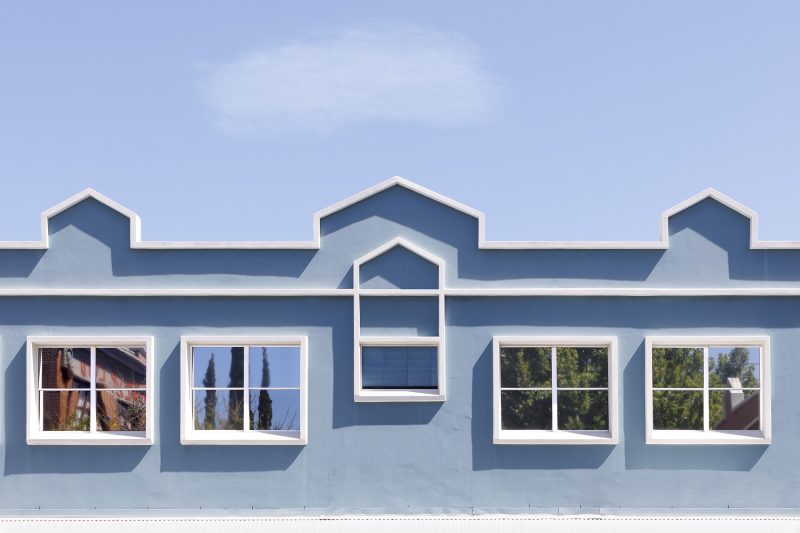 Pushing back against that tradition is a new generation of Australian photographers, turning to the manmade environment for creative inspiration.

While the work of Perth-based Tim Palman is heavily rooted in everyday urban realism, several of his colleagues offer a more wistful, minimalist examination of the landscape. Leading the way is Los Angeles based erstwhile Sydneysider George Byrne, whose work has been regularly featured at the Head On Photo Festival, while locally the work of both George Vavakis and Liz Barker take a similar minimalist approach, each offering their own unique interpretation. 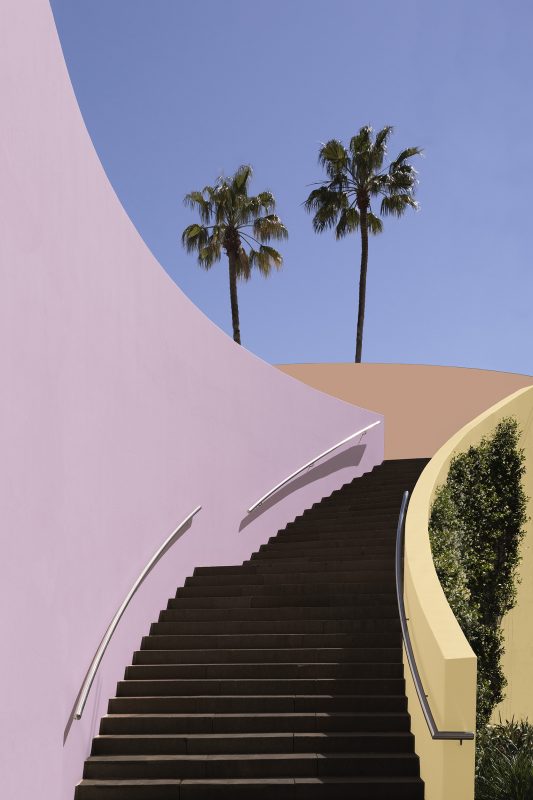 Within SomewHere: Dispelling the myth of Perth’s Urbanality, Barker casts both an empathic and poetic eye across Perth and its surrounds. Predominantly exploring downtown Perth and its western suburbs, Barker’s selective eye imparts the series with a romantic sense of mid-century modernism. Often drawn to architecture reflective of the era, decisive lines, sensual curves, lucid colours, and even palm trees, all further enhance that feeling. 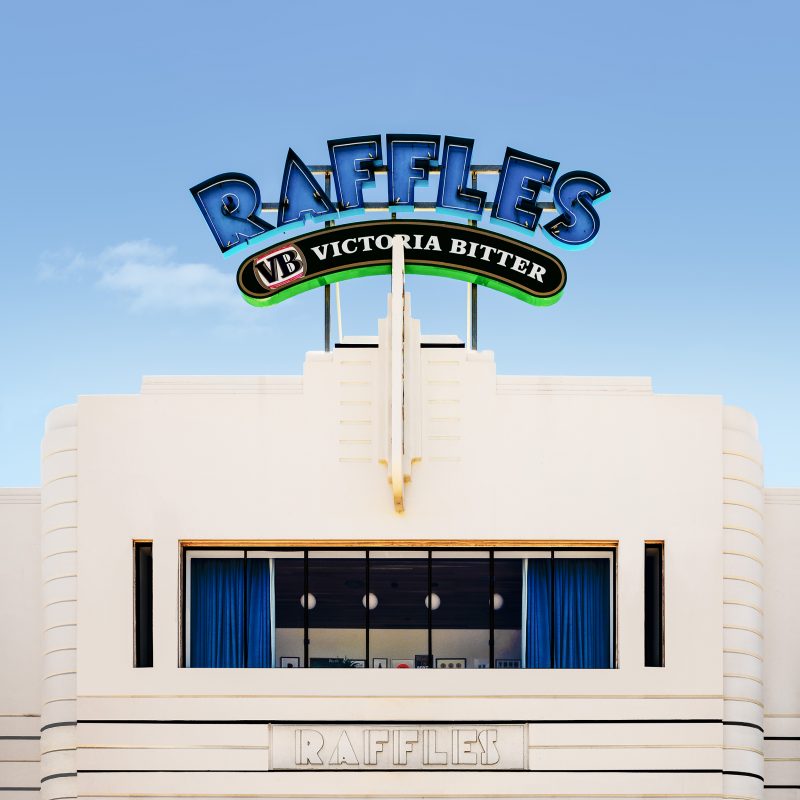 There is no better example of this than Barker’s photograph of the vintage-looking Raffle’s sign on the Canning Highway in Applcross. A graceful interplay between the warped neon sign and subtly curved brickwork with the resolute horizontal and vertical parallels defines the image, enhanced further by a muted colour palette. The photograph is a beautiful example of the refined complexity Barker’s work projects. 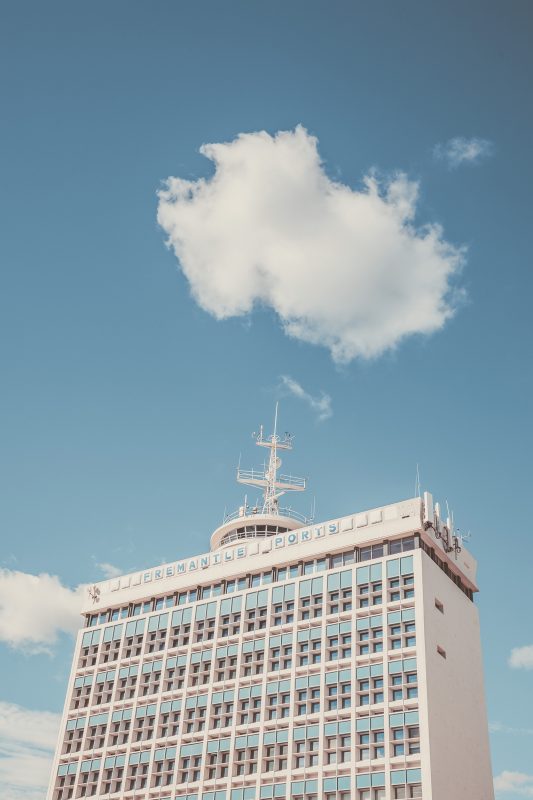 The streets of Fremantle feature prominently with the exhibition. Given Barker’s aesthetic predilection, the Fremantle Ports’ Administration Building on Victoria Quay serves as an inspired muse. While the photograph “Freo Ports” presents an appealing oblique interpretation of the upper floors of the iconic Hobbs, Winning and Leighton designed building, “Zipper” presents a more abstract and considered view. 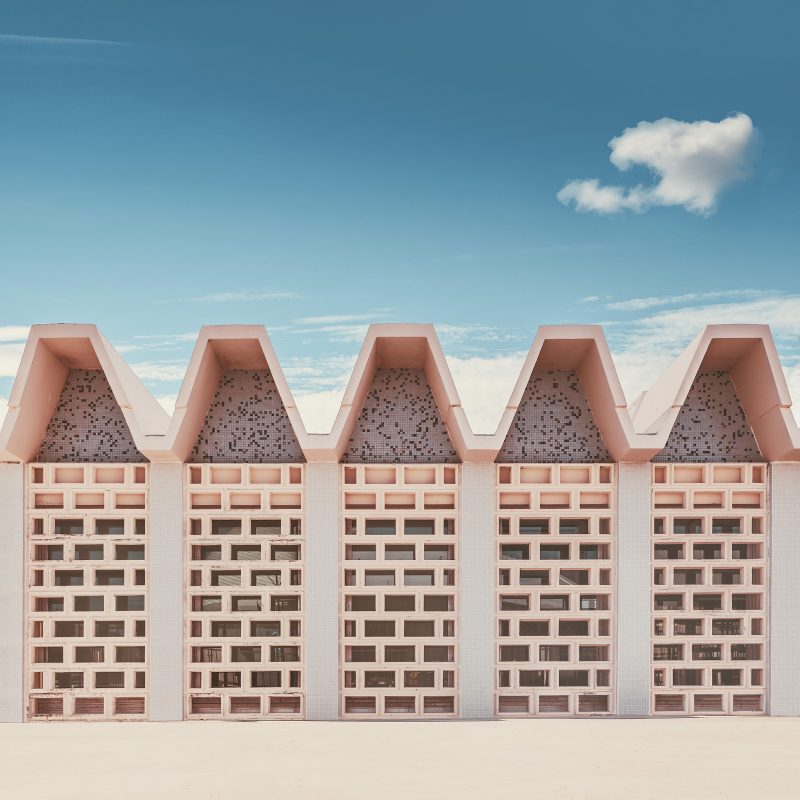 A convoluted concrete roof housing a mosaic of tilework sits astride defiant concrete pylons that are interspersed with a matrix of cement grids. It is a beautiful example of attention to detail in both the structure and its depiction. Delving further into the art of abstraction is the photograph “Raine Squares” where subtle shadows frame the sombre colour shifts within each of the individual square panels on the building’s facade. Each visit with the photograph reveals more and more intricacy. 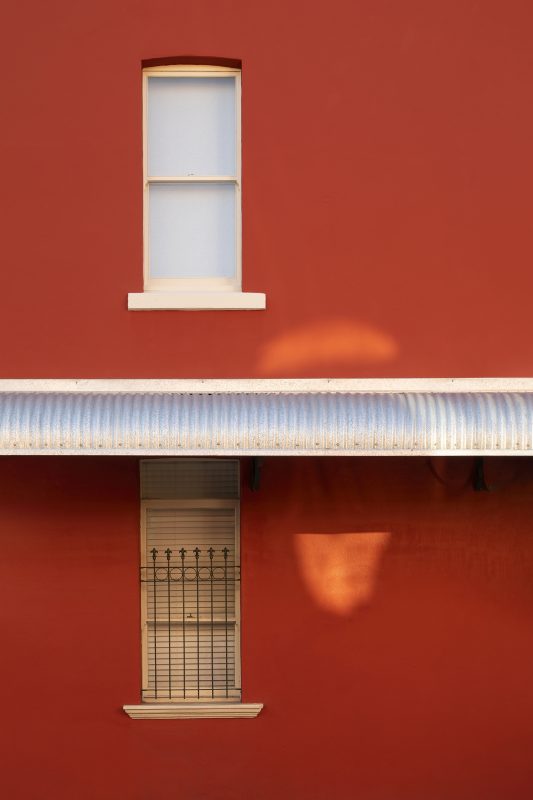 While symmetry is a repeated theme with the exhibition – especially with Barker’s compositions made in downtown Perth – her enamoured interpretation of suburbia is one of the exhibition’s highlights. From the abstract portrait of a private residence (“Three Pines”) through to the symmetrical planar presentation of a Piara Waters recreation court (“Let’s Play”), a shimmering reflection of light on a red Fremantle wall (“I See Red”), and the facade of a Cottesloe gelato store (“Gelato Bar”), Barker’s sense of composition reins supreme.

This exhibition follows Barker’s return to Australia after a 14 month stint in the Netherlands. Arriving back in Perth during the full furry of Covid, Barker quarantined at The Westin Perth, turning her hotel room and its limited vista into her muse, which subsequently gave rise to the series “My Quarantine Project.” Upon her emergence from lockdown with a newfound openness, Barker saw something unique and special in what previously was commonplace, for her, dispelling the myth of Perth’s urbanality.

Liz Barker’s SomewHere: Dispelling the myth of Perth’s Urbanality furthers Picarda’s quest to fill the tangible void in west coast photographic exhibitions. For a city of over two million people and a state offering both boundless and diverse opportunities for photographic subjection, it seems ludicrous that there are not more avenues for the medium’s promotion in Perth. As Barker’s work affirms, there’s certainly a sufficient case for such.

Details: The exhibition is running at Picarda Gallery, 19 Essex Street, Fremantle, until 25 April 2022, open daily Thursday to Monday, 10 am to 6 pm.

* Brett Leigh Dicks is an Australian/American photographer based in Fremantle. His work has been featured in numerous solo and group exhibitions in Australia, Europe, and the United States. His series exploring Coober Pedy was recently published in The New York Times while his project exploring Perth’s Lunch Bars will be exhibited at the Ellenbrook Art Centre In June and Sydney’s Head On Photo Festival in November