Home 2022 March 2 Blueprint to rein in money in politics

Blueprint to rein in money in politics

There’s a lot of money being thrown at politics in Australia these days. Estimates already abound that mining magnate Clive Palmer is funding the UAP – United Australia Party – at the upcoming Federal elections to the extent of $80 million or more.

The Centre for Public Integrity has just issued a Blueprint to rein in money in politics. Here it is.

The Commonwealth has the weakest donation laws in the country. Disclosure is limited. Last financial year the source of over $68.27 million in party income was hidden from public view. Campaign spending is at record levels, allowing mining billionaire Clive Palmer to have already spent more than $31 million on political advertising in the lead up to the next federal election. And big donations are flooding our political parties, with the Australian Labor Party and the Coalition receiving over 20% of their fundraising from donations over $1 million.

The current $14,500 disclosure threshold allows millions of dollars of hidden money to flow to our political parties. It also encourages donation splitting, where multiple donations below the threshold are given by related donors to a single party, or by one donor to multiple party branches.

Current disclosures are only made public on the 1st February following the end of the financial year. This means that donations made on the 1st July 2021 will only be public on the 1st February 2023. And the current definition of “gift” in the Commonwealth Electoral Act 1918 is limited, in that it does not include income from party fundraisers or business sponsorship. Real time disclosure of all donations, beyond the current definition of “gift”, is needed to improve the transparency of money in politics.

Expenditure caps are already operating in NSW, Queensland, South Australia and the ACT. Amounts range in size, with NSW implementing a cap per electorate of $132,600, while ACT has an electorate cap of $42,750 (see Figure 1). A national expenditure cap should be set by adjusting the state precedents to the national context, with the amount meeting the following aims:
● Cutting spending – reining in current spending levels, while maintaining the ability for parties to run campaigns and communicate to voters;
● Equality of participation – setting an amount that is achievable for independents and small parties to fundraise;
● Spending proportional to voters reached – electorate caps allow greater equality in money and time spent communicating with voters across the country.

Millionaire donors are dominating the funding of our political parties. Analysis of donations to political parties from 1998/99 to 2020/21 show that 22.48% of Coalition and 21.83% of ALP fundraising coming from donations over $1 million. The small number of people who have the financial capacity to make large donations have a disproportionate ability to gain political access and influence. Donation caps would create equality in participation for members of the public to support political parties through donating small amounts.

Donation caps have been implemented in Victoria, Queensland and New South Wales (see Figure 1 below). The Commonwealth should adopt a donation cap of around $5000 per party, to align with current state caps and rein in the influence of big donors in politics.

The 2020 audit of the Australian Electoral Commission (AEC) by the Australian National Audit Office (ANAO) found that the AEC is only “partially effective” in monitoring compliance. The ANAO reported that the AEC does not use all available data sets or enforcement powers, and that there is no assurance that disclosures are accurate or complete.
The AEC needs more resources and powers to enforce donations rules, through a dedicated enforcement division. A National Integrity Commission should be established to investigate serious breaches. 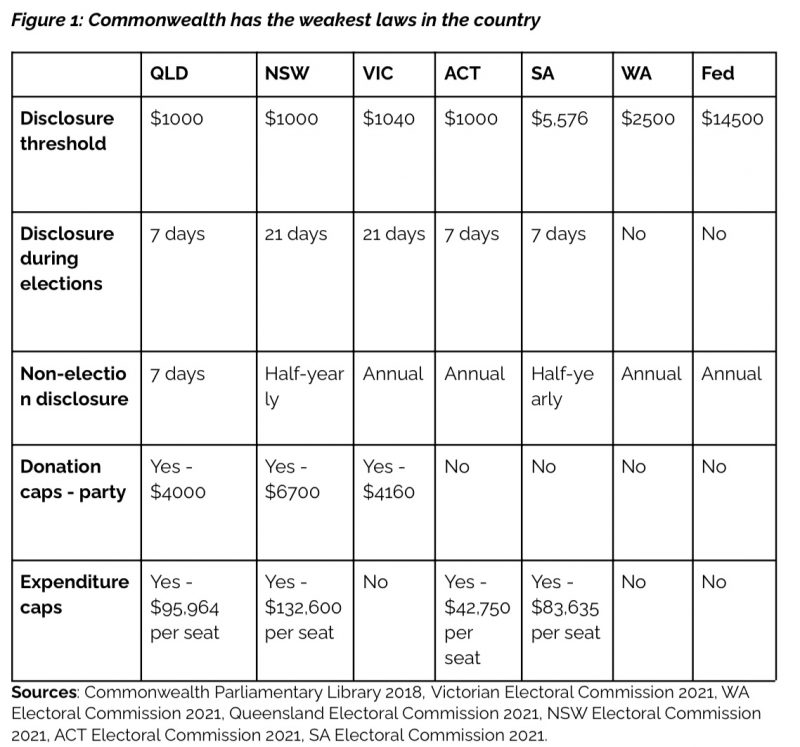 About The Centre for Public Integrity

The Centre for Public Integrity is an independent think tank dedicated to preventing corruption, protecting the integrity of our accountability institutions, and eliminating undue influence of money in politics in Australia. Board members of the Centre are the Hon Stephen Charles AO QC, the Hon Anthony Whealy QC, Professor George Williams AO, Professor Joo Cheong Tham and Geoffrey Watson SC. Former directors include the Hon Tony Fitzgerald AC QC and the Hon David Ipp AO QC. More information at www.publicintegrity.org.au.

The full text and sources relied upon in Blueprint to rein in money in politics may be found here.

* Disclosure – Michael Barker, the Editor of Fremantle Shipping News is a member of the Centre for Public Integrity’s Money in Politics research Committee