Home 2021 August 4 The Power Of The PEN: A Night In Celebration Of Words

The Power Of The PEN: A Night In Celebration Of Words

He will forever get to keep his promise of not being a coward as he, along with two other fellow poets are now amongst the martyrs, killed along with nearly a thousand other Burmese civilians by the military junta, since the coup in February 2021.

Burma is not the only nation in our neighbourhood where words can kill, and even more commonly. land you in prison. In my own country, India, which was once regarded as a beacon of democracy in the Asia-Pacific, an octogenarian has been languishing in prison since 2018. Varavara Rao is a veteran Telegu poet. He has been detained and charged many times by previous governments – charges that have never held up in court. Now an old man, he spent most of the last two years in the prison hospital and is currently being held in house arrest, hundreds of miles away from his home and family.

In response to repeated spurious charges he has written:

I did not supply the explosives
Nor ideas for that matter.
It was you who trod with iron heels
Upon the anthill
And from the trampled earth
Sprouted ideas of vengeance.

In May, a Chinese court convicted a New York-based Australian writer of spying on China on behalf of Australia. Yang Hengjun and the Australian government have vehemently denied the charges. That a writer whose spy novels didn’t sell that well (and its double-agent protagonist described as pretty unconvincing) should be convicted of spying could be the stuff of comedy, but for the fact that in China spies can be sentenced to death. At the time of writing, more than two months after his conviction, Yang Hengjun’s life hangs in balance, literally, as he is yet to be sentenced.

COVID has shrunk our world. We cannot travel or receive outsiders, be they tourists, students or refugees. News headlines are dominated by the pandemic. We are more likely, understandably, to accept governmental restriction on the freedoms to march, to gather in numbers. COVID and the cautions it has generated, provides a perfect cover for repressive governments to curtail freedoms of speech and assembly.

In the midst of restrictions, it’s still possible for us, here in our community, to gather together to celebrate words: words of poets, imprisoned or in danger, in countries of our Indian ocean neighbourhood.

You are invited to learn more at this Voicebox PEN Night at the Navy Club, this coming Monday 9 August 2021 at 7 pm.

Here’s all the detail. 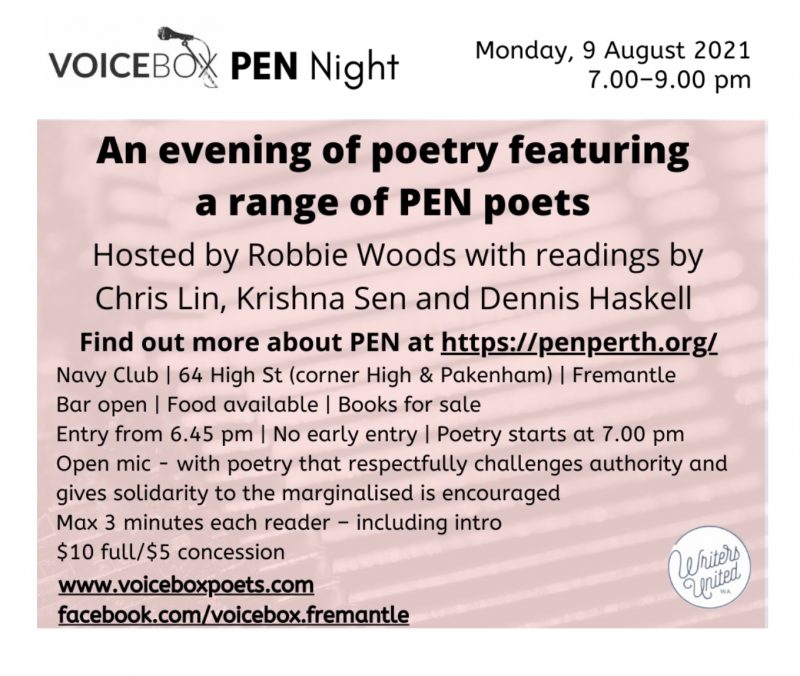 * This article was written by Krishna Sen