Listening to Freo frogs: band or chamber orchestra? (With apologies to Hans Hug)

One senses a loving fascination by the lucky people who get to name a species of frog. Latin and Indigenous names aside, you can just hear what an Australian frog might sound like when it has one of the following in its name: there’s pobblebonks and banjos and whistlers, then there’s a beeping, bleating, buzzing, snapping, growling, whistling, moaning, ticking, tapping, clicking, hooting, laughing, humming, stuttering, squelching, ratcheting, rattling, and motorbikes, each of which speaks, or roars, for itself.

If you could see all these frogs perform together, the sight would be stupendous for their names tell us that some will have lace lids, black soles, flat-heads, hidden-ears and they might be mottled, barred, blotched, broad-palmed, painted, red-eyed, collated, tusked, long -footed, long-snouted, spotted, striped, masked, smooth, splendid and magnificent, wide-mouthed, white-lipped, tiny, tusked and wrinkled. It’s clearly not a white tie and evening clothes event — it’s the Rolling Stones, in this decade.

Many of their names reveal that frogs can be found pretty much anywhere: in mist, marshes, deserts, mountains, in trees, caves, sand and in black soil, where they might be remote, robust or revealed, for each one of these words is part of the name of an Australian frog. By the way, if you happen to hear “Brékkek Kékkek Kékkek Kékkek! Kóax Kóax Kóax!” it’s the Greek chorus of frogs that James Joyce put in Finnegan’s Wake, quoting Aristophanes‘s play, The Frogs (405 BCE). What Joyce wrote before and after the quote didn’t make sense either, but that was the point, yes?

There are, of course, no actual orchestras containing all 240 species of Australian frogs (98% unique to this continent) for each of these wonderfully-named amphibians more typically sing in smaller bands.

More seriously, in this country, seven species have disappeared in the last thirty years, another thirty are currently endangered and several more species only have a few individuals left. As my wonderful field guide textbook by Mark Sanders says, it is, of course, more essential than ever that “all Australians … respect our environment … it is the responsibility of all citizens.”

Situated on the Swan Coastal Plain, the Fremantle area can share its frogs with Perth and Bunbury, but often not with the Hills, nor with the South-West proper. Great places for spotting frogs are in our wetlands where frogs can be found at Herdsman Lake, Perry Lakes and Piney Lakes, or in our own wetlands such as Bibra Lake, Booyeembara Park and Beeliar.

We have nine different species of frog in the wider Freo area and these include the Motorbike Frogs and Slender Tree Frogs often found in our back yards. More about these in a moment.

Squelching Froglets are only to be found on our Swan Coastal Plain. The only place in the world, imagine that. The others, also unique to WA, are the Moaning Frog, Quacking Froglet, Clicking Froglet, Western Banjo (or Western Pobblebonk), Crawling Toadlet (also known as Crawling Broodfrog or Gunther’s Toadlet), and the Turtle Frog. The names say a lot.

Before all you frog experts write to the Shipping News, the Sand Frog, Bleating Frog, Ticking frog and Whooping Frog are restricted to the Darling Ranges, while the Humming Frog has been found on the Swan Coastal Plain South to Caversham.

To talk about the characteristics of our frogs, let’s put them inside their Latin genus categories:

You won’t be tested on the following, but just briefly: the Litoria grouping is associated with tree frogs and the Motorbike frog is a large, solid, ground-dwelling tree frog with males calling from August to January.

The Slender Tree Frog is active June to December and apparently smells of fresh cut grass (don’t you love a random, sweet-smelling fact).

Crinia are well-patterned, notably small and ground-dwelling and, unlike many other frogs, can often be heard calling in the day, particular on a rainy or overcast day (ie, it’s the sound of happiness). They have narrow feet and long toes and are most active November to March.

The Myobactrachus is only found in WA; it is both unique and recognizable with small head and short limbs, breeds in summer in sandy burrows and may be heard calling in good rainfall.

The Pseudophyrne are terrestrial with eggs guarded by the males. Heleioporus includes some of the largest frogs, all of which lay eggs in shallow burrows and they call from within their burrows which amplifies their sound (ie smart techno-frogs).

Limnodynasles, includes a range of sizes, all of which are ground-dwelling with no toe pads. Their feet can have almost no web, or can be fully webbed.

Description of genus and species would take pages, so this is just a taste and a warning: though fairy tales suggest kissing a frog may be productive, the Australian museum says it’s an absolute no to kissing, licking or touching one when you go a-frogging.

Photos, you would think, might better help you identify your frog but no, because many species change their colour, texture and pattern over the year; however, their different sounds might help. 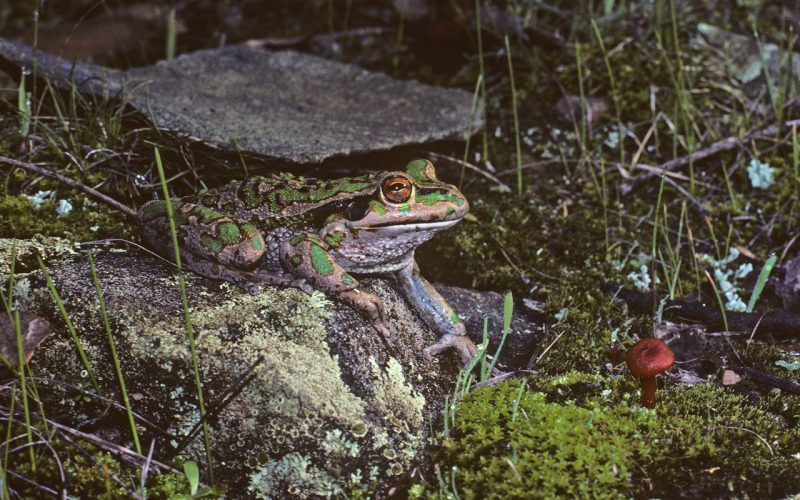 The Motorbike Frog – my author must have had a notebook at hand as he notes that it has — “a loud distinctive rising growl resembling a motorbike changing gears followed by a short series of raspy growls; waaarrrrrk … wr-wr-wr-wrk … wr-wr-wrk …wr-wr-wrk”. Smell of skin excretions likened to fresh methanol. Eeew.

A friend’s Motorbike Frog tadpoles were sourced off the Internet and bought in accordance with the ruling that tadpoles must not travel further than a three-suburb radius in order to limit the spread of disease (which is difficult to do even following protocols). Not long after this she found herself with a dawn chorus of over twenty Hell’s Angels revving their motorbikes outside her window. The Motorbike Frogs, she discovered, also screamed, whether it was the female or the male was impossible to tell, but twenty frogs screamed, for quite a while. 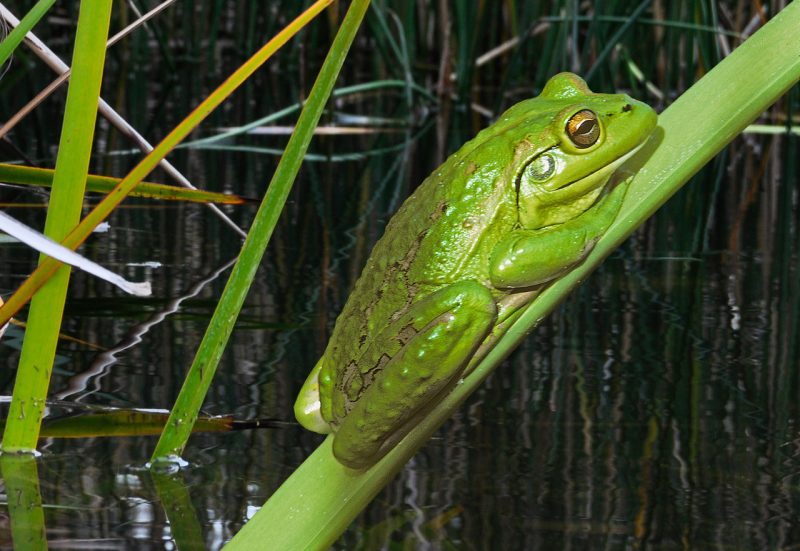 She assumed the frogs were on heat when they screamed, but in fact they were more likely to be screaming in distress (at birds, cats etc). A large frog might even have been eating a smaller one. Don’t judge.

Apart from the frogs disrupting her morning peace and her thinking far too much about frogs on heat, she and the Motorbike Frogs got along fine, until one day the frogs disappeared.

Usually the frogs disappear over winter and reappear over summer but this did not happen. Finding herself disturbed by the deafening silence, she tried again. The tadpoles were sourced close by, loud dawn chorus, lots of screaming and then, after two years, they all disappeared again. A mystery, though the screaming in alarm may be a clue.(Who ate them? Her French neighbours peut etre?). Now she has a life-long frog obsession. 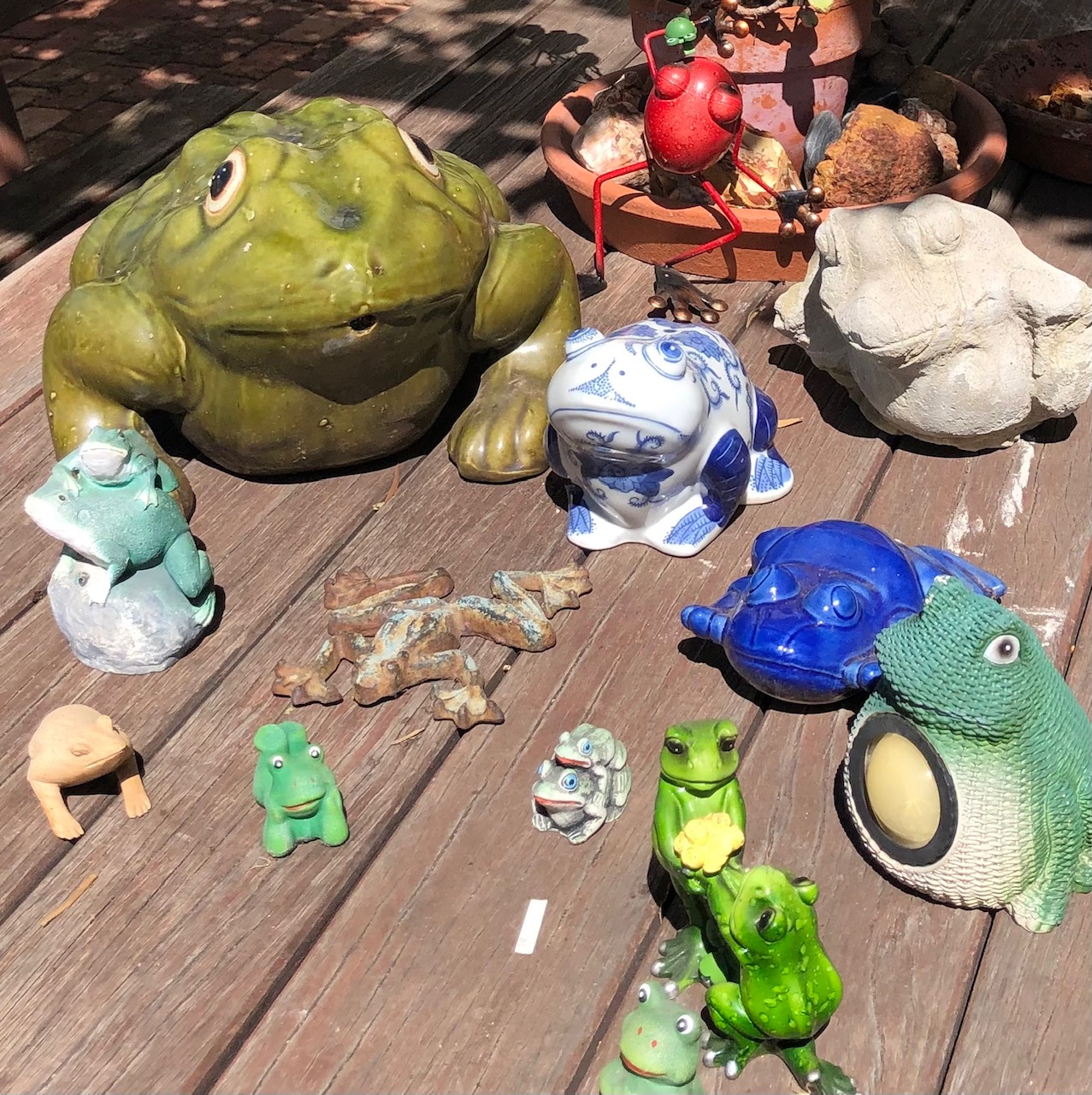 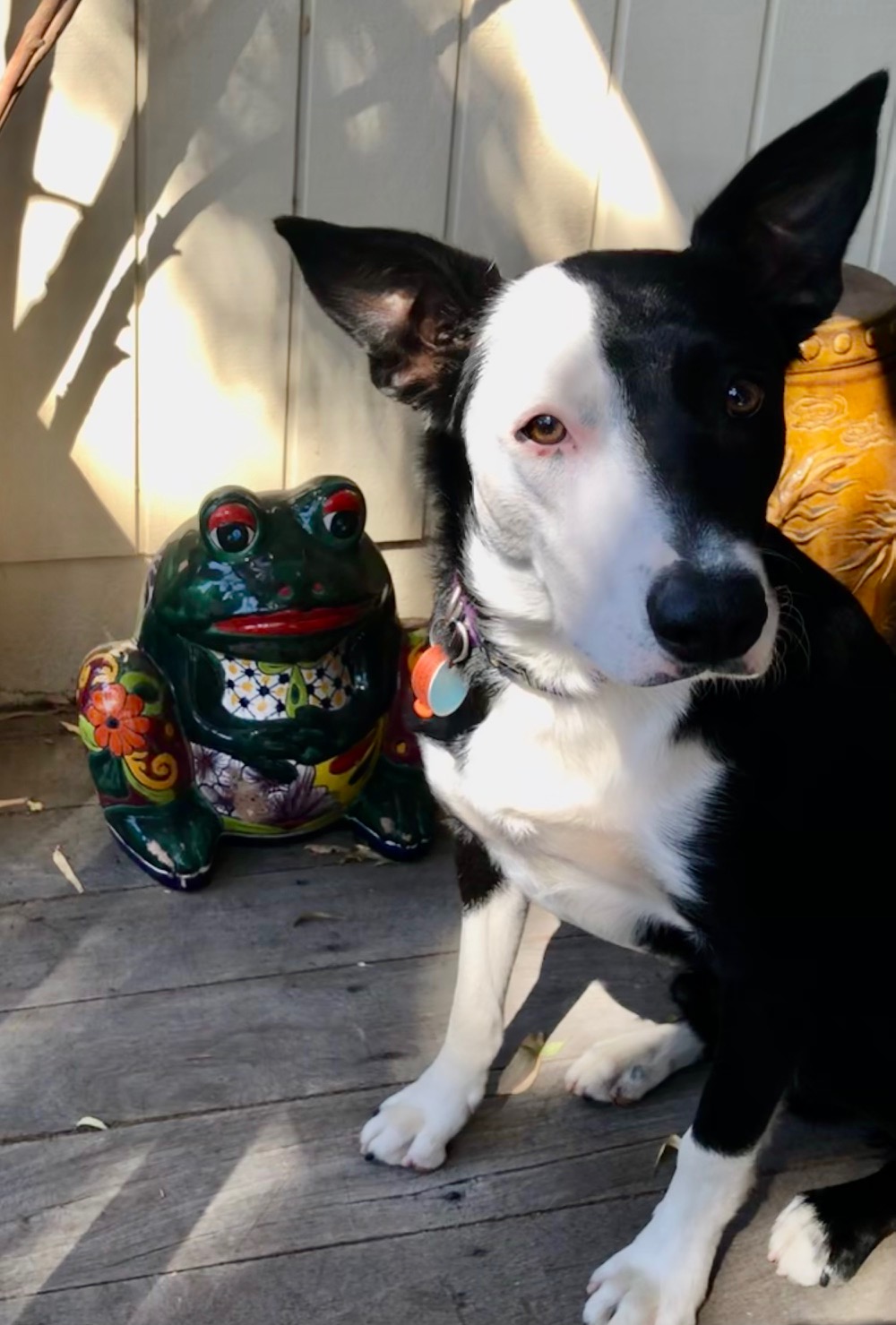 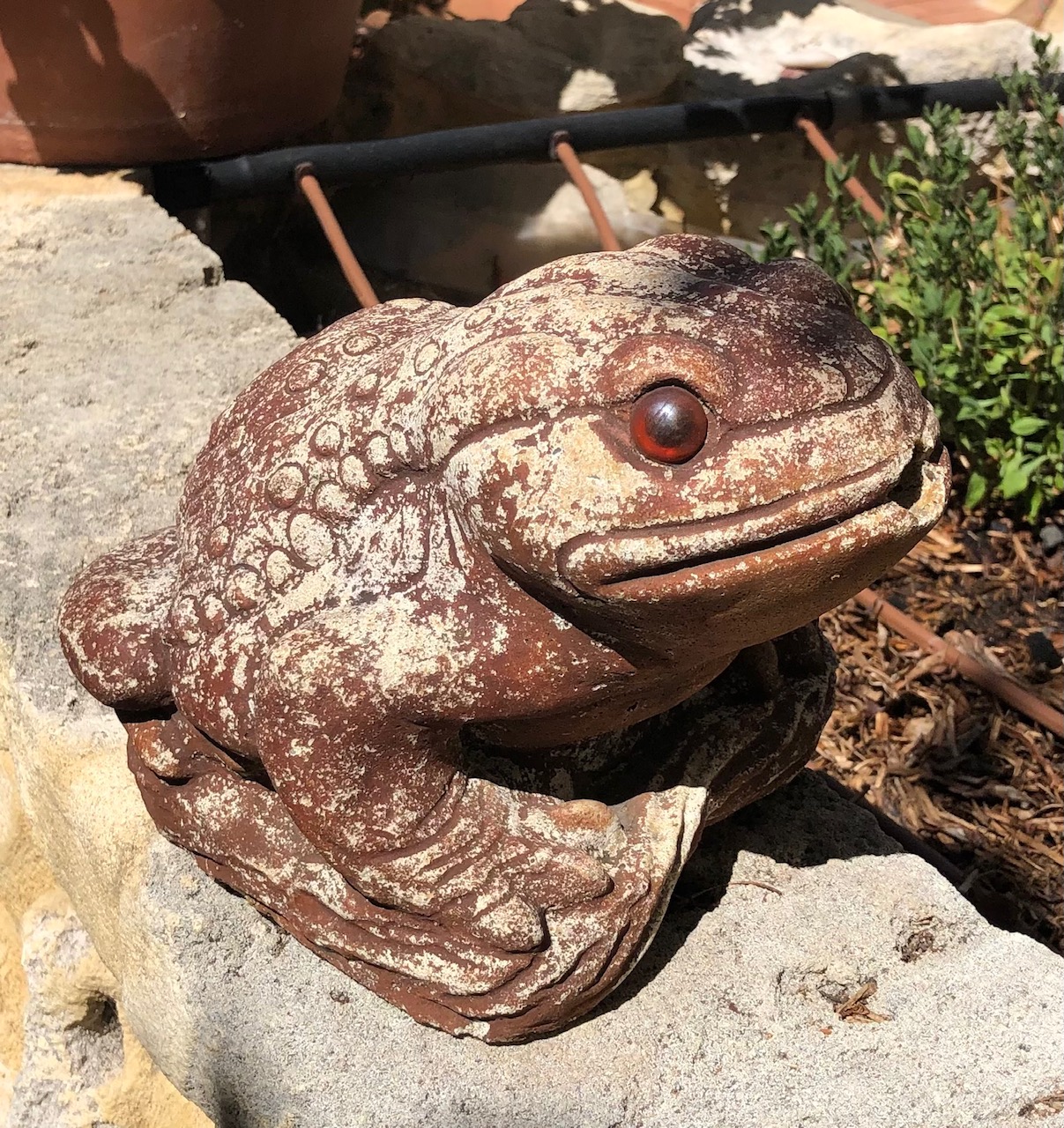 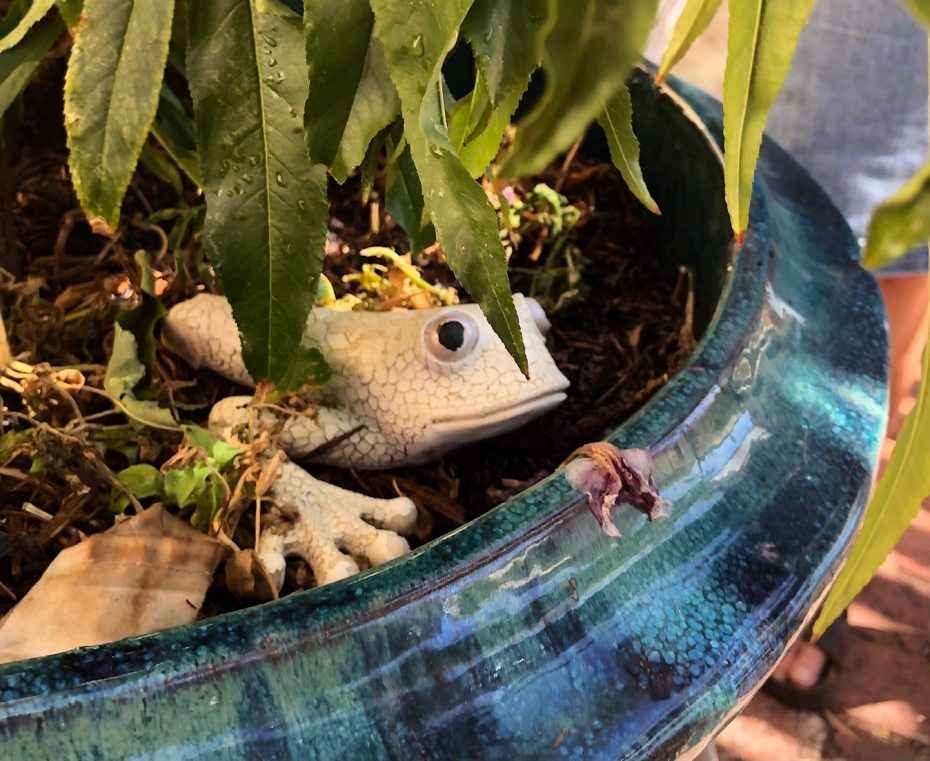 Another friend built her pond hoping that frogs would turn up as they often do (even in a fenced yard). If you build a frog pond the frogs will often appear by themselves between two and five years. But hers didn’t. And so, tadpoles were sourced on the Internet and again, they were Motorbike Frogs. Some months on, they too disappeared. 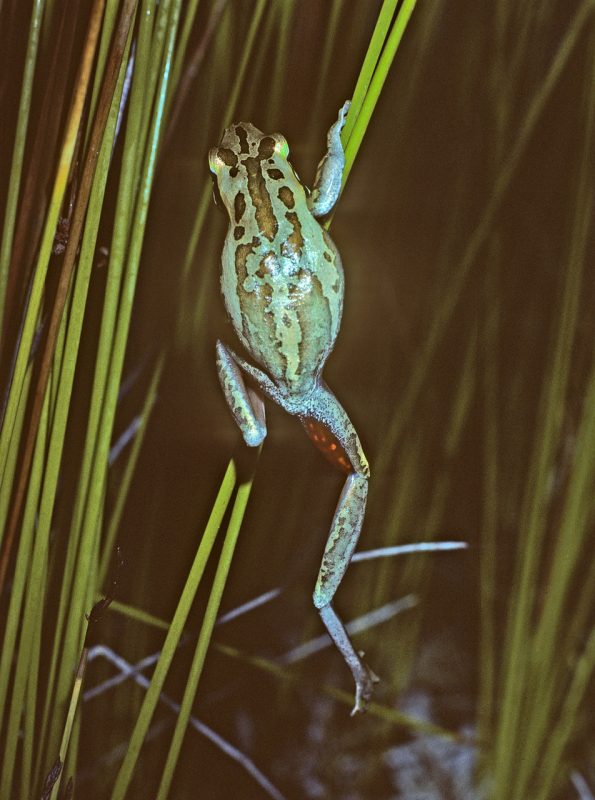 The other common backyard frog is the Slender Tree Frog which is typically pale brown with a distinctive stripe down its side, giving out a harsh grating creak. You know, the sound of a door that no longer fits its frame but which you have to try to shut or open anyway. 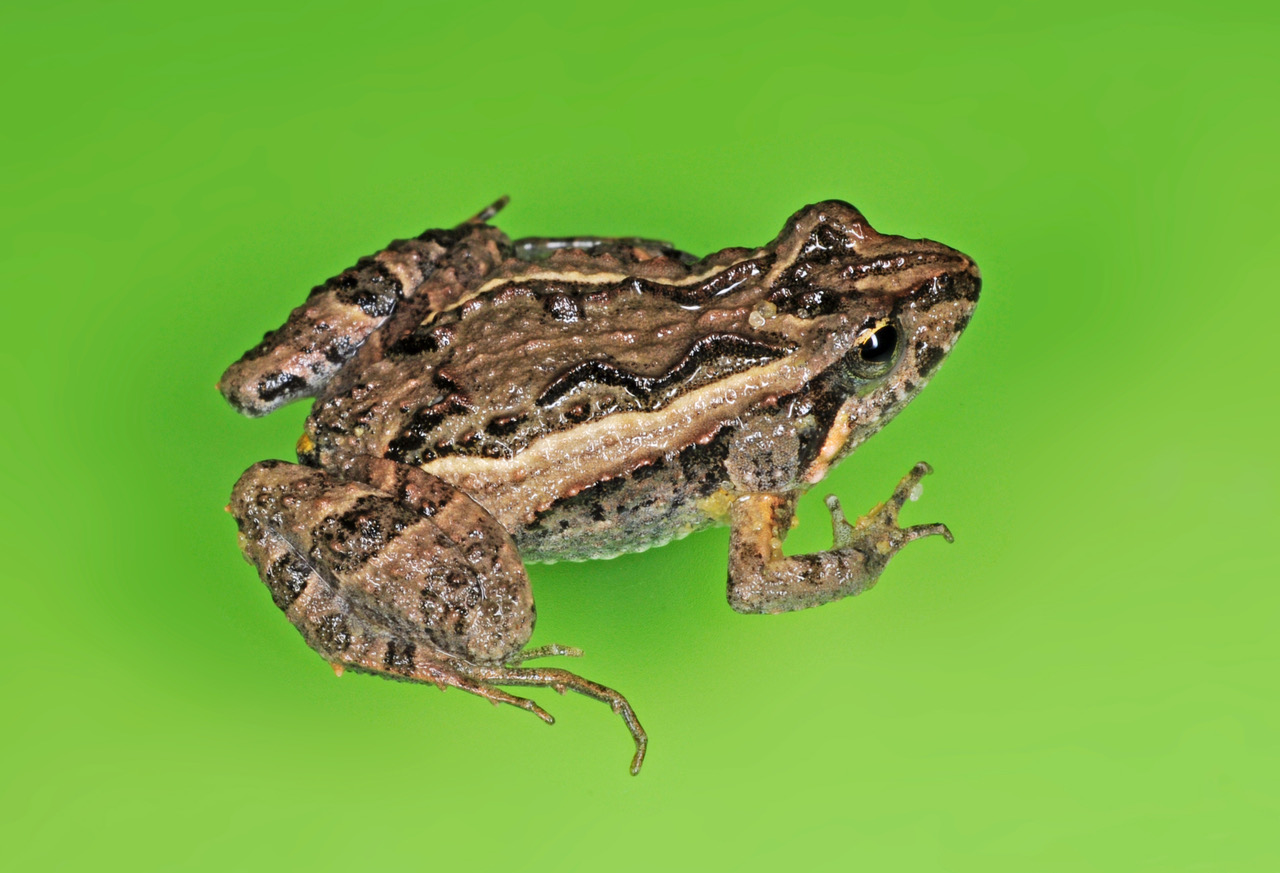 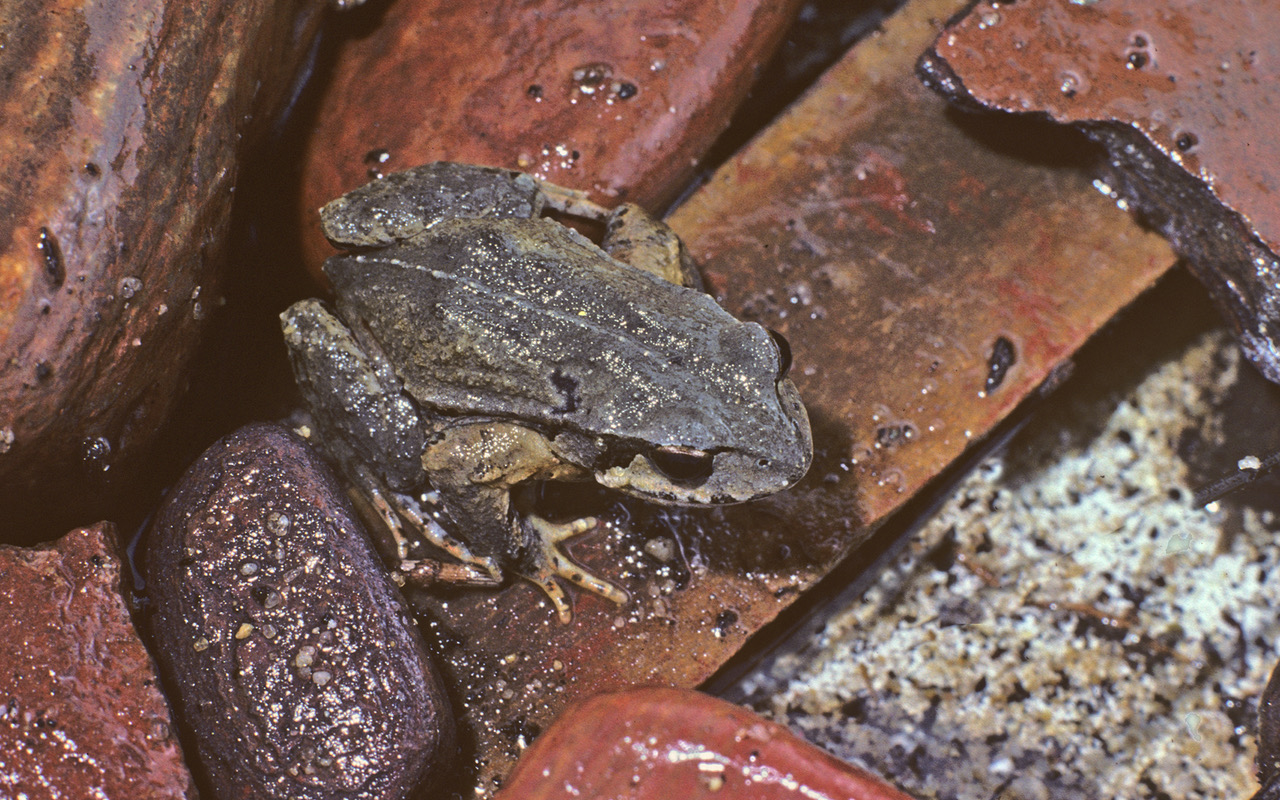 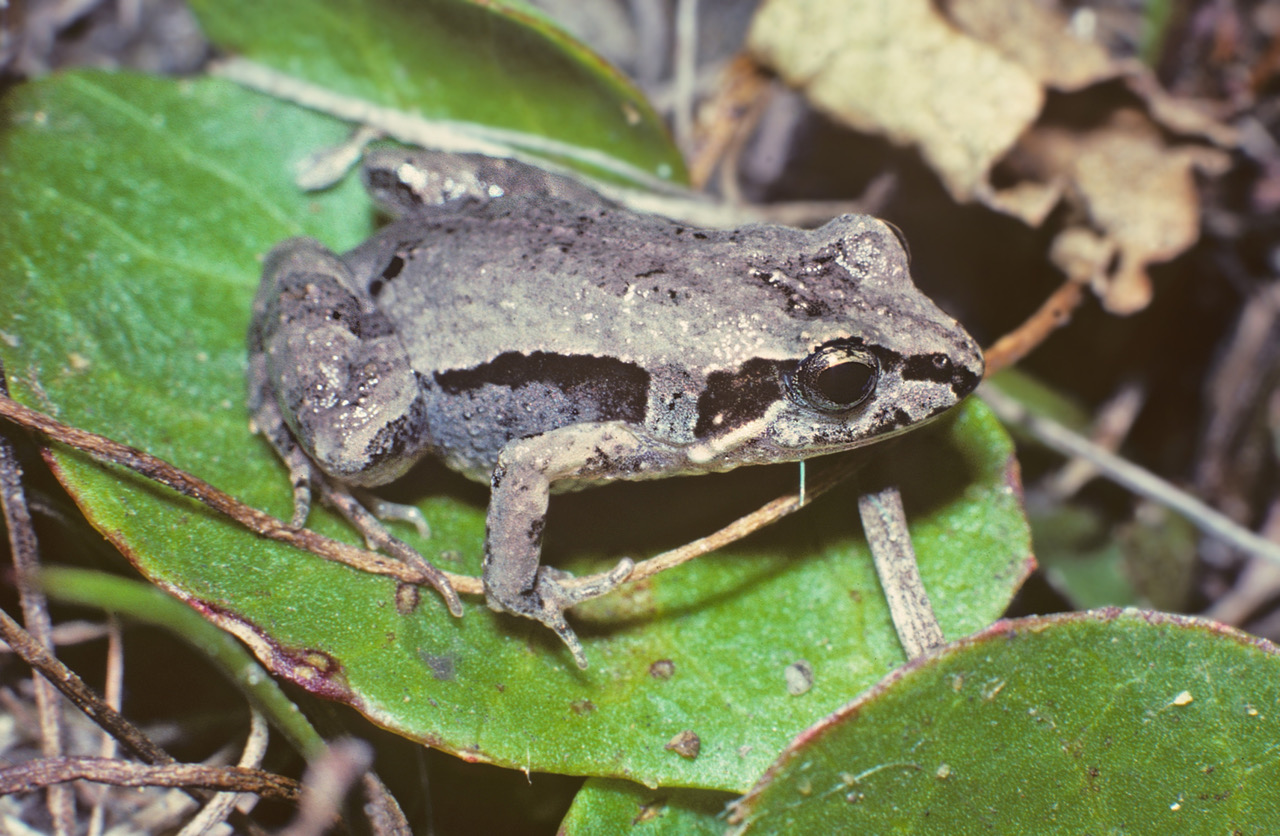 Harder to find but identifiable by sound are the Squelching, Quacking and Clicking Froglets.

The Squelching Froglet, in shades of grey to brown with unwebbed feet has “a high-pitched squelch”; the Quacking Froglet, the largest of these Crinia froglets quacks once, or five or six times in quick succession; the Clicking Froglet varies in both colour and texture, has unwebbed toes and “a harsh staccato rattle” not unlike a dried pea rattling in a can. 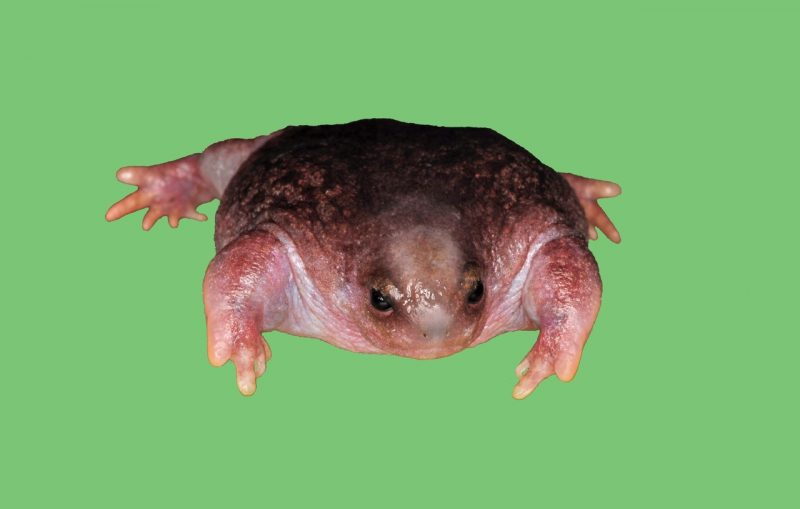 The male Turtle Frog gives out a “series of short deep creaky croaks while slightly buried beneath the surface” (can actually be up to a metre below). With small eyes, legs growing from its side instead of under it, a humped back, small protruding head and broad rounded snout. It’s the Quasimodo of the set. 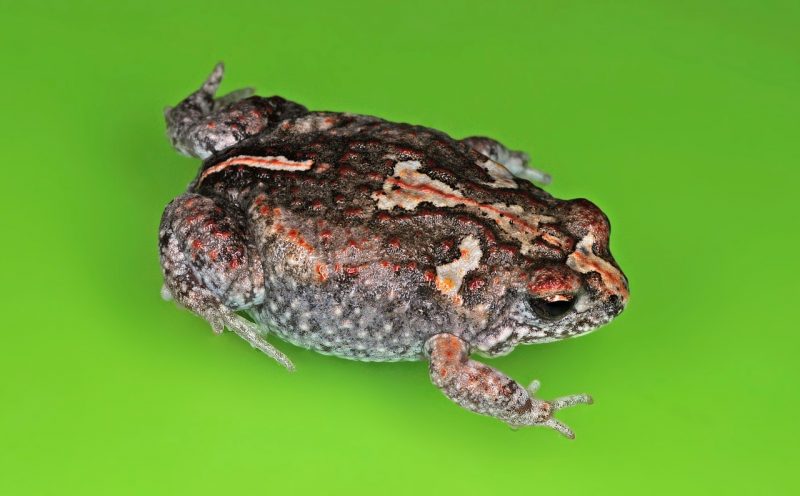 The Crawling Toadlet, like others of the Pseudophyrne species, gives out a “short harsh grating squelch” – you should be hearing it from now until early winter. 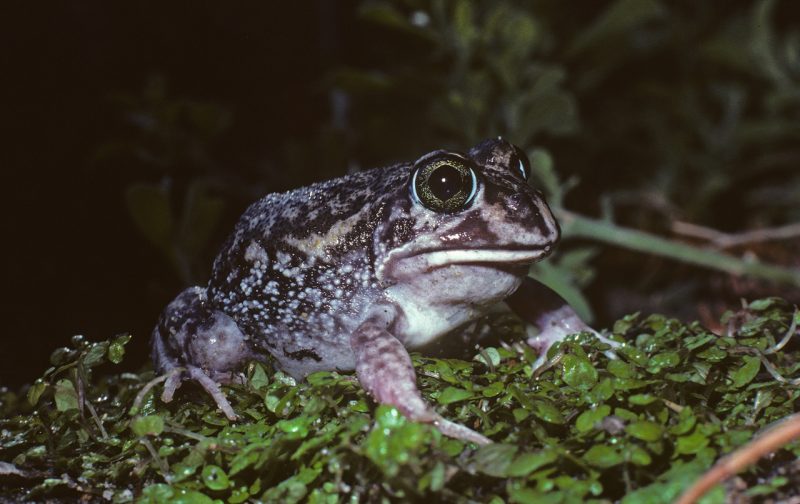 The Moaning Frog comes next: “a long, low, rising moan, each lasting 1 sec and repeated- 11 times a minute.”

The more musical Western Banjo, also called the Western Pobblebonk, has a “single loud ‘bonk’ repeated slowly”. Billy Connolly couldn’t improve on that description. The males calling from “concealed locations” (it’s in the book!) join in with each other “producing noise somewhat reminiscent of a banjo”. So, romance is not dead after all.

Sound, of course, must be both produced and heard. I’m told that a Farsi expression refers to ‘walking percussively like a frog’ but, apart from the rap of its lovely, sometimes webbed sometimes not, feet, the percussive parts of the frog are the tympanum and the throat.

The tympanum allows them to hear and is situated just below and to the side of the eye. It is sometimes a large, round and obvious circle, but it can be indistinct, even hidden. The sound comes when the frog closes its mouth and nose and shuttles air back and forth over its vocal chords. This clearly does not explain the difference in sounds, but I might leave you the reader to discover how that works.

In case you have problems differentiating your frog from your cicada and cricket, all of the above sounds are on the Frog ID app or on the WA Museum website. On the app you can record your own frogs and send the sound in, a perfect activity for the April school holidays. My granddaughter discovered that the app seems to know when it’s a child imitating a frog. Tut tut.

If this article has wetted your feet and whetted your appetite to host some taddies and then frogs, do keep in mind that in WA, a Pet Herpetofauna Keeper’s Licence is required to keep any kind of frog; records must be kept and the overall cost and the licence will depend on the species.

Another warning: dogs love jumping into frog ponds, with, as yet unknown, consequences

** Credit for all the fantastic frog photos, except frog statues, to David Knowles