Just what’s in issue in Camenzuli v The Prime Minister ?

Tomorrow, at 2 pm Fremantle time, the Full Court of the High Court – not just two or three of the Justices of the Court as is usually the case on an application for special leave to appeal – will hear such an application in respect of matters arising out of the Liberal Party’s preselection drama in its NSW division. 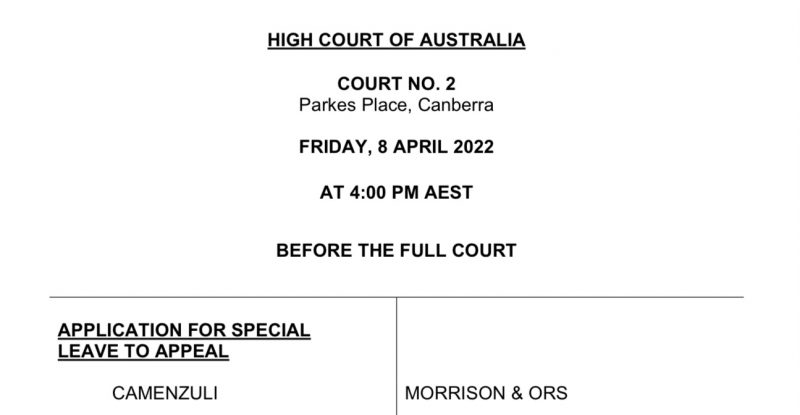 The application is in respect of the recent decision of the NSW Court of Appeal in Camenzuli v Morrison [2022] NSWCA 51 (5 April 2022).

The applicant for special leave to appeal is Matthew Camenzuli, who initially commenced proceedings in the NSW Supreme Court to obtain orders declaring invalid the recent candidate preselection decisions of a committee set up by the federal executive of the Liberal Party of Australia. The committee included the Prime Minister, Scott Morrison. The proceedings were recently formally ‘removed’ into the High Court.

At the time he commenced the proceedings, Mr Camenzuli was a member of the Liberal Party. Wednesday night just gone, he was apparently expelled from the party. Whether his status as a member affects the status of his application for special leave to appeal we will find out later. Presumably not, since he was a member of the party at relevant times.

Important in understanding what one of the primary issues is likely to be on Mr Camenzuli’s application, is the fact that, unlike your tennis club or golf club, or the Greens Party, the Liberal Party of Australia is an unincorporated association. It hasn’t been created, for example, under legislation like the WA Associations Incorporation Act. On the face of it, it has about the same status, so far as the general law is concerned, as an association a bunch of Freo people might create and call the We Love Freo Association with rules they have drawn up, but which has not been officially incorporated under the WA AI Act.

Why is this understanding important? Well, because legal precedent from the High Court itself nearly 80 years ago, in 1934, says that while incorporated associations involve a contractual arrangement between the organisation and its members recognisable and enforceable by law, the rules of an unincorporated association don’t have such contractual effect. So, generally speaking, there is nothing for the law to enforce or interpret; nothing for the courts to look at; nothing, in the language of the law, that is ‘justiciable’.

‘Hitherto rules made by a political or like organization for the regulation of its affairs and the conduct of its activities have never been understood as imposing contractual duties upon its officers or its members. Such matters are naturally regarded as of domestic concern.’

The NSW Court of Appeal on the justiciability question rejected Mr Camenzuli’s arguments and found that –
* Cameron v Hogan is binding authority that disputes arising from the application of the rules of an unincorporated political party are not justiciable.
* The role and manner of operation of political parties has not changed materially since Cameron was decided. The provisions in the current Electoral Act providing for party registration, candidate nomination and endorsement, and public funding do not purport to affect the general internal operations of political parties.
* Accordingly, it is not correct to state at a high level of generality that the statutory changes have now taken political parties “beyond the ambit of mere voluntary associations”.
* The public interest in the operation of major political parties does not justify judicial intervention in internal party disputes generally.
* Whether a dispute within a political party is justiciable must be determined in each case with respect to relevant provisions of the Electoral Act.

The first question on the special leave application will be whether the 1934 case is still good law, or even if it is, generally speaking, whether things have changed so much due to the federal recognition of political parties in Australia since 1934, that the courts today should have a role in reviewing all the activities of registered political parties, including disputes about how to interpret and apply their rules, regardless of their unincorporated status (where they are unincorporated).

However, the NSW Court of Appeal, in the interests of ‘finality’, proceeded to express their view about the critical second question, whether Mr Camenzuli’s arguments about the interpretation and application of the rules governing federal executive intervention in NSW divisional preselection decisions, and the invalidity of the committee’s preselection decisions, were correct.

On that topic, the Court of Appeal rejected Mr Camenzuli’s arguments that the power of the federal executive to intervene in the NSW division activities in certain circumstances in order to exercise ‘management and control’, stops short of enabling the federal executive and its committee taking over preselections procedures, ruling that –
* The phrase ‘management and control’ can be taken as a singular concept to express the scope of a power.
* Alternatively, the Liberal’s Constitution may refer to “management” with respect to the affairs of the organisation and “control” with respect to a person or organisation.
* The effect of the exercise of the intervention power is to bypass the Divisional Constitution, which does not amount to an amendment of the Divisional Constitution.
* In any event, the powers and procedures in the Divisional Constitution that govern pre-selection are subject to the Federal Constitution under cl 8.2 of the Federal Constitution.

You can see how the High Court might well think that Mr Camenzuli has an arguable case that should be resolved by the Court, if the issue is justiciable.

But one does wonder, even if there is an arguable case about the meaning of the rules, why the highest court in the land would enter into what appears to be an entirely internal Liberal Party issue that the party can resolve itself, if necessary, by changing its own rules so they are neither ambiguous nor confusing.

Of course, a related question remains: why don’t the political parties incorporate under state and territory laws?

We will see what happens tomorrow!