The City of Fremantle has been operating from its temporary administration building at Fremantle Oval since December 2017.

Since then the redevelopment of Kings Square/Walyalup Koort, including the new Walyalup Civic Centre, has been a long, at times painfully drawn out affair. Its cost, design, lasting benefit, name, have all been debated strongly over the time. And as if that wasn’t enough, Covid descended and then the builder went into liquidation. Fortunately, for us all, the saga is about to be drawn to an end.

While some may have been enjoying their view of the Oval, the time has now arrived for the City’s administration, led by the Mayor and CEO, to commence their return to what was, when they left, known as Kings Square, but is now Walyalup Koort – Whadjuk Noongar for ‘the heart of Fremantle’. 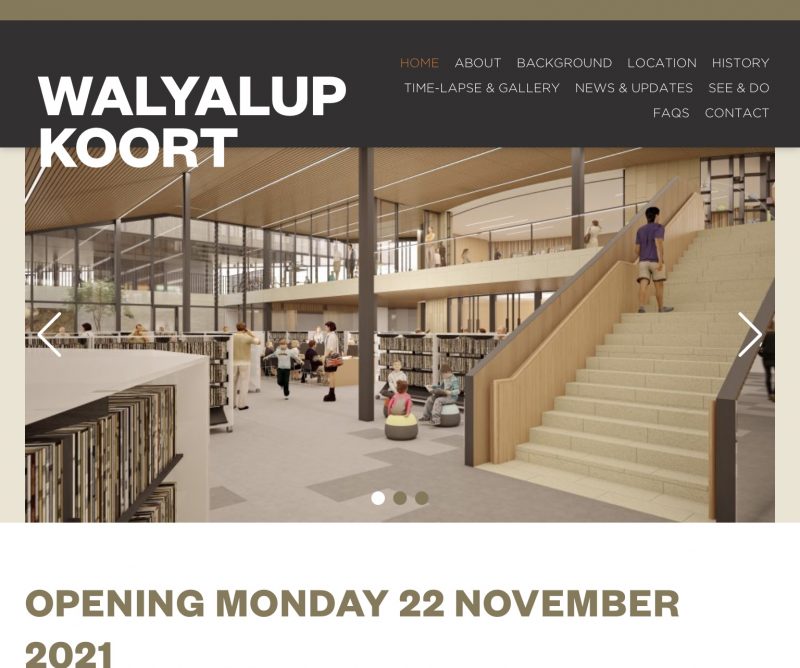 The library and customer service centre at Walyalup Civic Centre as well as the children’s playground are set to open to the public on Monday 22 November.

The Walyalup Koort (Kings Square) renewal, including the oddly named, adjacent ‘FOMO’ retail development, is the single-biggest redevelopment project in Fremantle’s history – as the costs update below attests.

Mayor Hannah Fitzhardinge said the transition of library services from Fremantle Oval meant the opening of the new community and civic facilities at Walyalup Koort was just around the corner.

“Freo’s heart is pumping again,” she said. “I think the people of Fremantle can feel genuinely excited that the hard work to revitalise their city’s centre is really coming to fruition.”

More than 2,500 new items have been added to the library’s collection in preparation for the re-opening. There will also be longer operating hours and new programs with modern services such as ebooks and audiobooks, book clubs, films, educational games and activities.

The Fremantle History Centre, located within the library, will include digital interactive screens as well as a vast stock of biographical files, newspapers, council minutes and agendas, publications, maps and plans.

“From the currently cramped space at Fremantle Oval to the bright, spacious and modern building at Walyalup Civic Centre, the community are going to have plenty of reasons to love their new library,” Mayor Fitzhardinge said.

While all this is happening, at tonight’s meeting of the Council’s Audit and Risk Management Committee, the Committee will receive a Project Update on the Walyalup Civic Centre from officers.

By way of background, the officers will report that following the Pindan Construction Pty Ltd liquidation event of 19 May 2021, the City have been delivering the construction works project through a Contractor Management arrangement with the CDI Group.

This arrangement has apparently included the City directly employing four of the Pindan site project team. This was felt to be a critical move to ensure project continuity and preserve construction knowledge and contractor relationships.

So far as the financial implications are concerned, the officers will report that the City has continued to actively manage costs associated with the delivery of the construction works. A ‘Work Breakdown Structure’ (WBS) was developed and implemented to separate and track costs associated with original works delivery, associated works and costs and also costs resulting from the liquidation event.

In accordance with the following high-level summary table, officers have now commenced the final account process with contractors and suppliers. 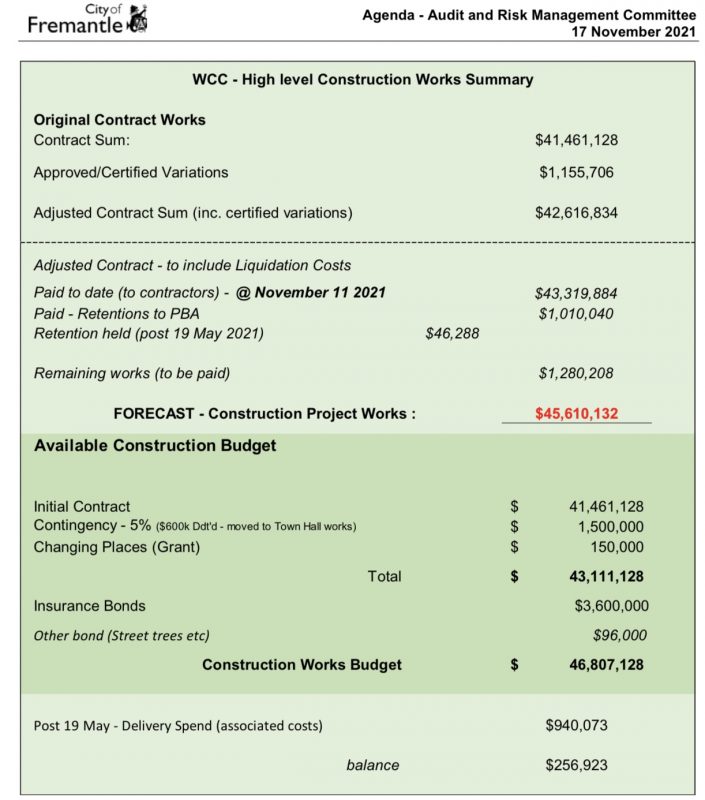 The total value of works including retentions will be $46,127,340; however, this is inclusive of adjustments and other variations which are funded from separate budgets as per the breakdown below:

The officers also will also report that progress on site has continued to be challenging as a result of the prolonged and heavy wet weather and also the impacts of Covid on both the materials supply and labour markets.

It transpires that a number of the original subcontractors have struggled to maintain a site presence and are struggling financially as a result of the impacts of Covid; however, the site team have successfully managed to retain the workforce and maintain works momentum.

For the record, here’s where things are at.

On this basis, the project team have progressed all inspections, testing and statutory approvals sign-off. Subsequently a partial occupancy certificate was approved on Friday 29 October.

The Facilities Management team are now on site, they are actively engaged with the project team and are progressing through the system training and handover process. Whilst this occurs, the project team will continue minor snagging and finishing works and cleaning internally. Their main focus is now to complete the external works, this predominately includes:
• Final mesh panel installation and fixings.
• Flashings (decorative) to elevations.
• External lighting – include configuration and testing.
• William Street – loading bay area, including stone cladding and loading bay door.
• Paving’s, street lighting and street furniture.
• Site clearance and site clean.

It is anticipated that the courtyard, loading bay and external areas will be complete for w/c 15 November and the final occupancy certificate in place.

Service opening is planned for Monday 22 November. Staff / EM occupation will increase through the induction process with an anticipated move completion by early December.

Key Risks/Issues have been identified as –
• Site labour
o Labourers are increasingly difficult to engage and retain in the (current labour market), however, resources have been brought in and CDI have been successful in supporting / resourcing in this area.

So it appears the new Walyalup Koort, with all bells and whistles ringing and shrilling, should be in full swing in time for Festiva!