Through my late teenage years, and later, I chose to ignore a range of apparently important and influential figures from the past, be they statesmen, poets, composers, artists, non-Australian Test cricketers, and so on.

In my defence, I was always more than a little fascinated by ‘thinkers’. Philosophers in particular seemed to have a timeless quality to them.

So why reject these others? Don’t know really. I think my thinking was that there were so many people from the more recent and present generations to consider, that considering those from a distant past was a waste of my precious time.

And I think I also liked to consider that what people from more recent generations had to say and did was somehow more ‘relevant’.

Anyway, I apologise to my older self, on behalf of my younger self, for my quaint, self-indulgent youthfulness, and say I should have, at least, given more time to Percy Bysshe Shelley. (The full handle is so much more impressive than the simple Percy Shelley, isn’t it?)

Shelley by all accounts was a crazy dude. 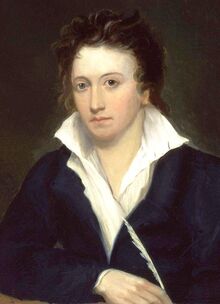 We’re thinking that if Fremantle isn’t to be renamed Walyalup, and is to retain the name of an Englishman who spent hardly a few weeks here, we might as well name it after a properly dissolute, and radical, English poet of note!

So this is the start of the Shelley push. But wait, isn’t there already a Perth suburb with that name? Damn!

This extract from Biography , where you can read more about the crazy dude, gives you an idea about the guy –

Shelley’s parents were so exasperated by their son’s actions that they demanded he forsake his beliefs, including vegetarianism, political radicalism and sexual freedom.

But really, all joking aside, it’s Shelley’s poetry legacy we wanted to draw attention to here, starting with his 1818 poem, Ozymandius.

Of this, the deeply learned say Shelley was reflecting on the impermanence of power and dynasties.

What a nice, timely sentiment, from just over 200 years ago!

I met a traveller from an antique land
Who said: Two vast and trunkless legs of stone
Stand in the desert. Near them on the sand,
Half sunk, a shatter’d visage lies, whose frown
And wrinkled lip and sneer of cold command
Tell that its sculptor well those passions read
Which yet survive, stamp’d on these lifeless things,
The hand that mock’d them and the heart that fed.
And on the pedestal these words appear:
“My name is Ozymandias, king of kings:
Look on my works, ye Mighty, and despair!”
Nothing beside remains: round the decay
Of that colossal wreck, boundless and bare,
The lone and level sands stretch far away.