We fear some readers will miss the satire, but you never know!

FREMANTLE, Australia – Anti-vaccination advocates rallied in the streets of Fremantle on Saturday last in support of their right to die from a highly contagious respiratory virus while hooked up to a ventilator. A procession of an estimated one thousand cars carrying protestors drove along the port city’s main thoroughfare with the vehicles adorned in anti-vaccination and anti-lockdown signage and slogans.

Here’s some of them. 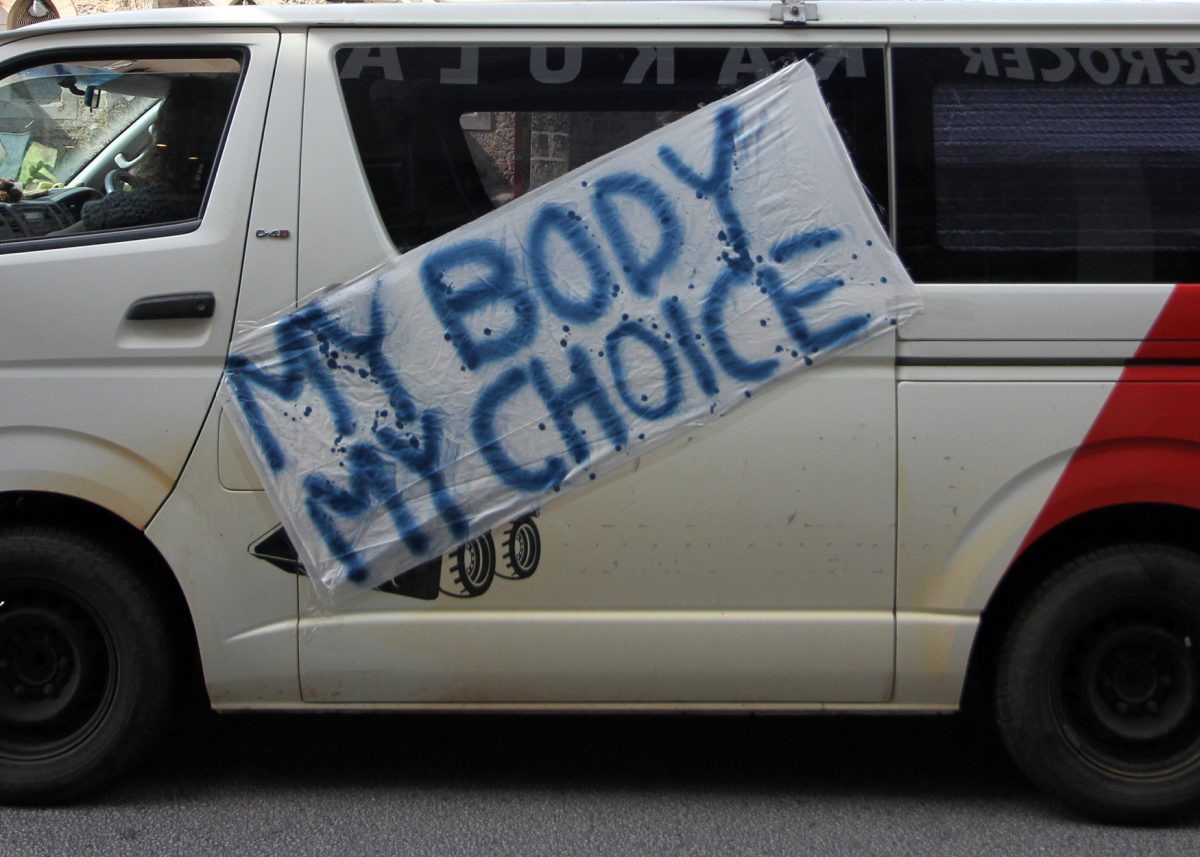 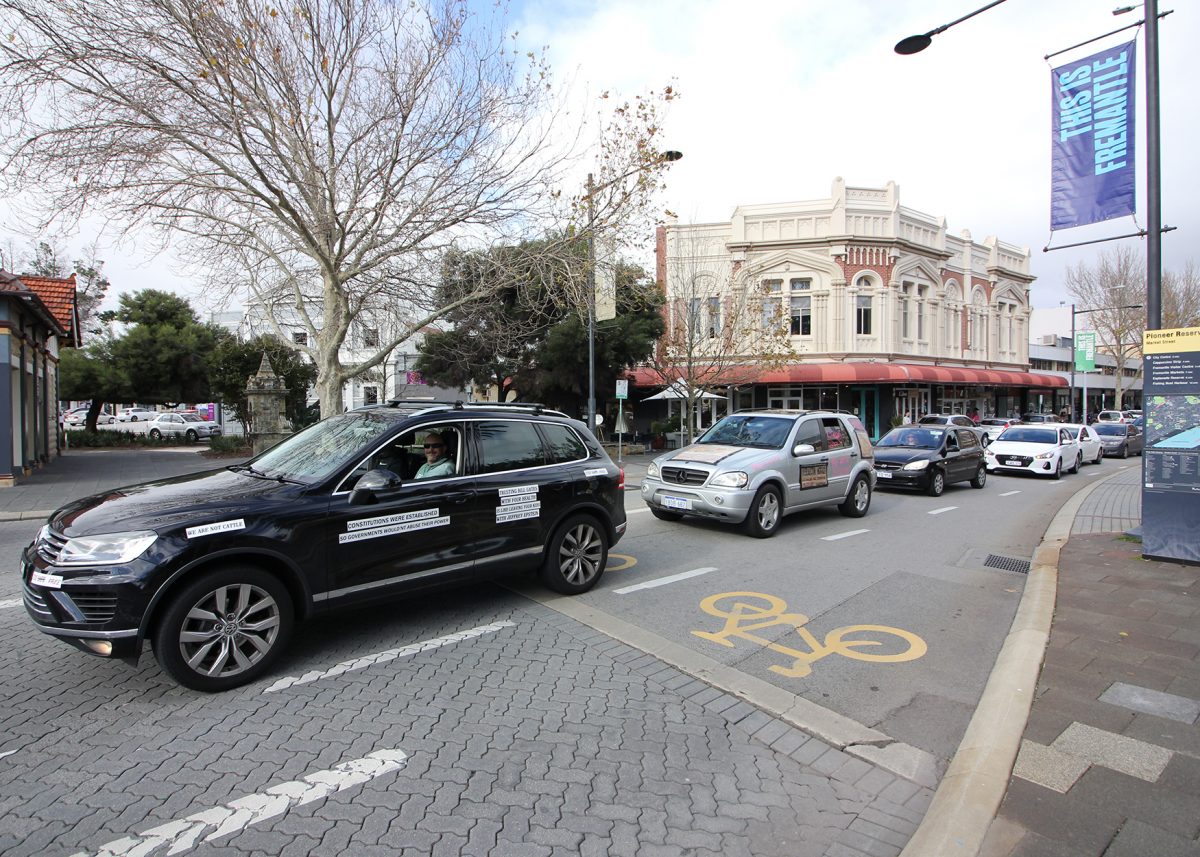 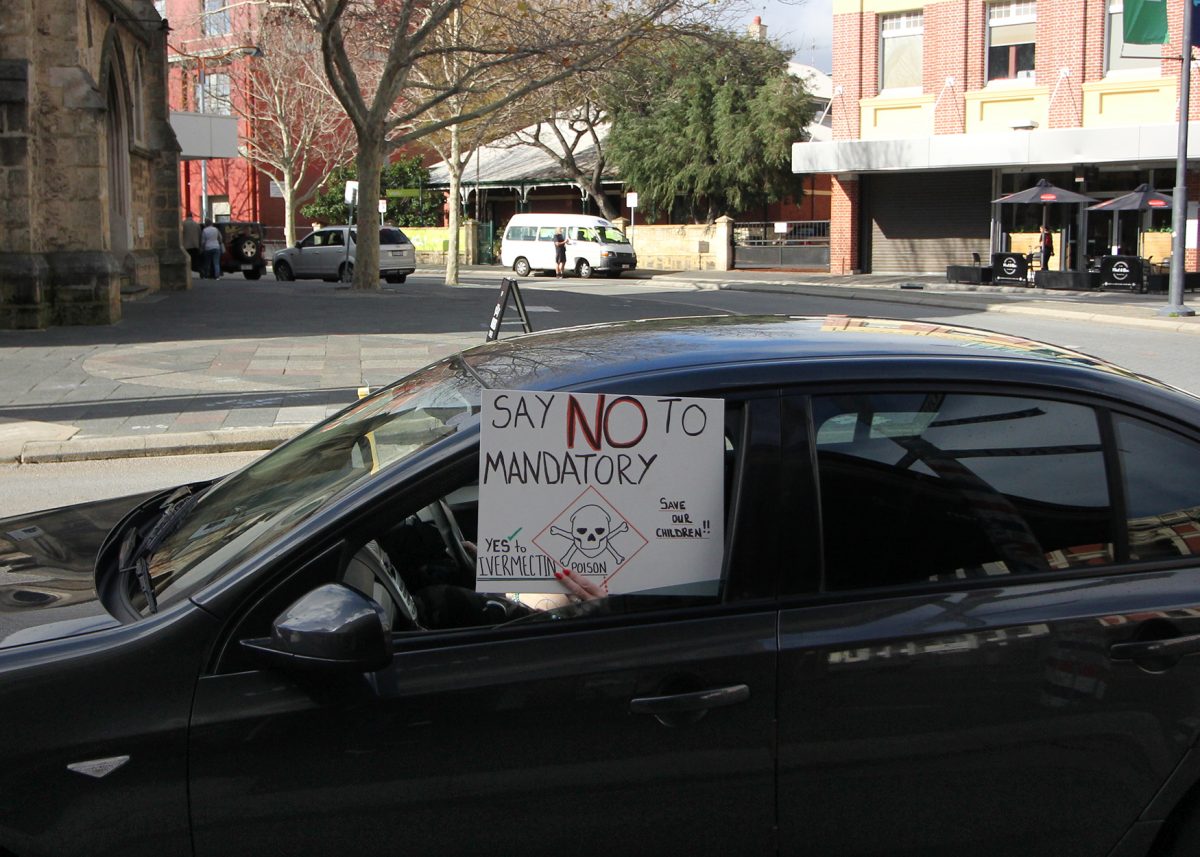 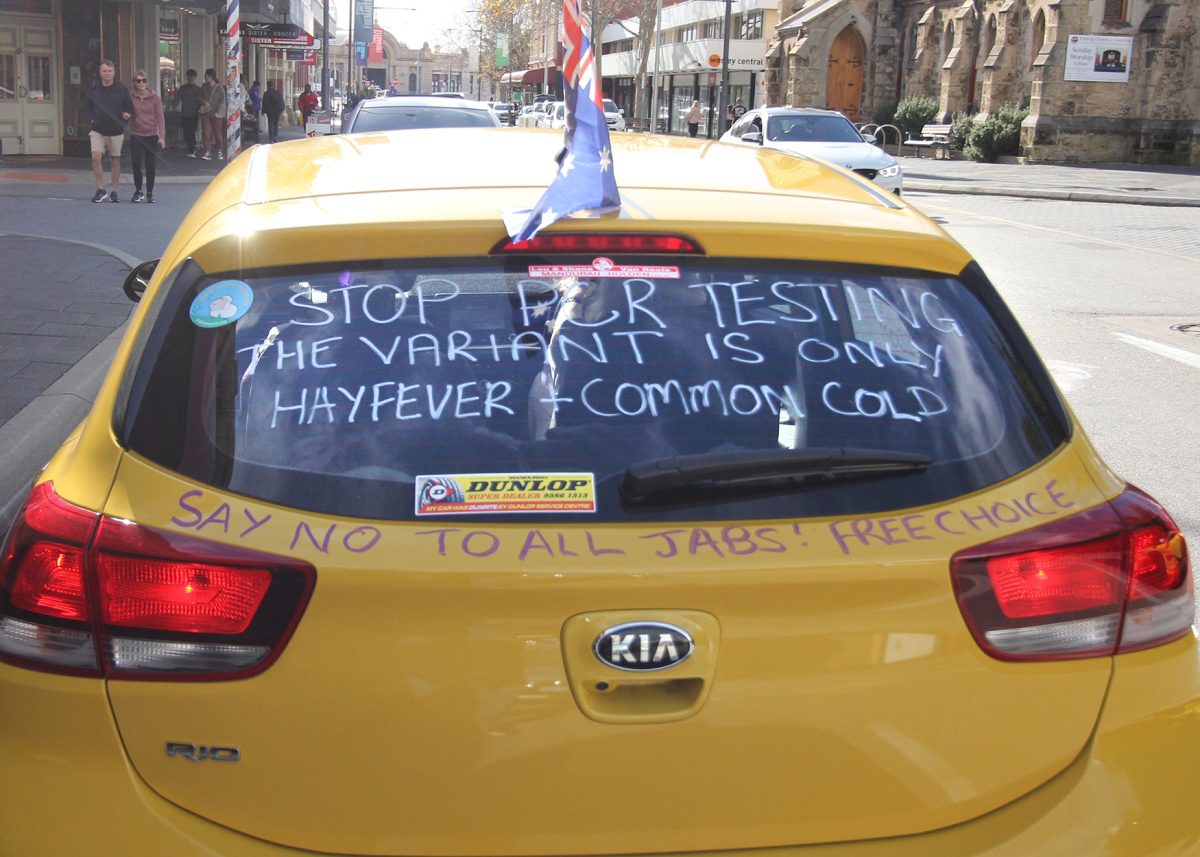 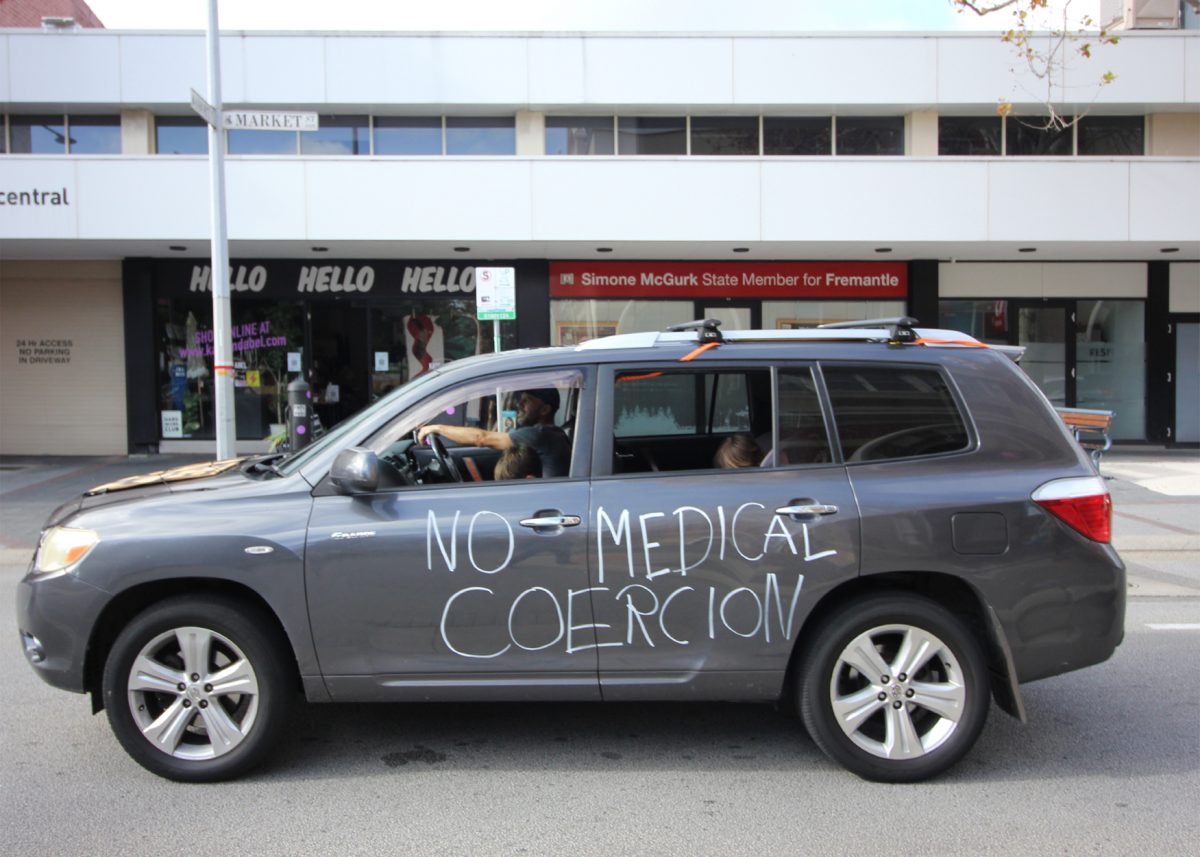 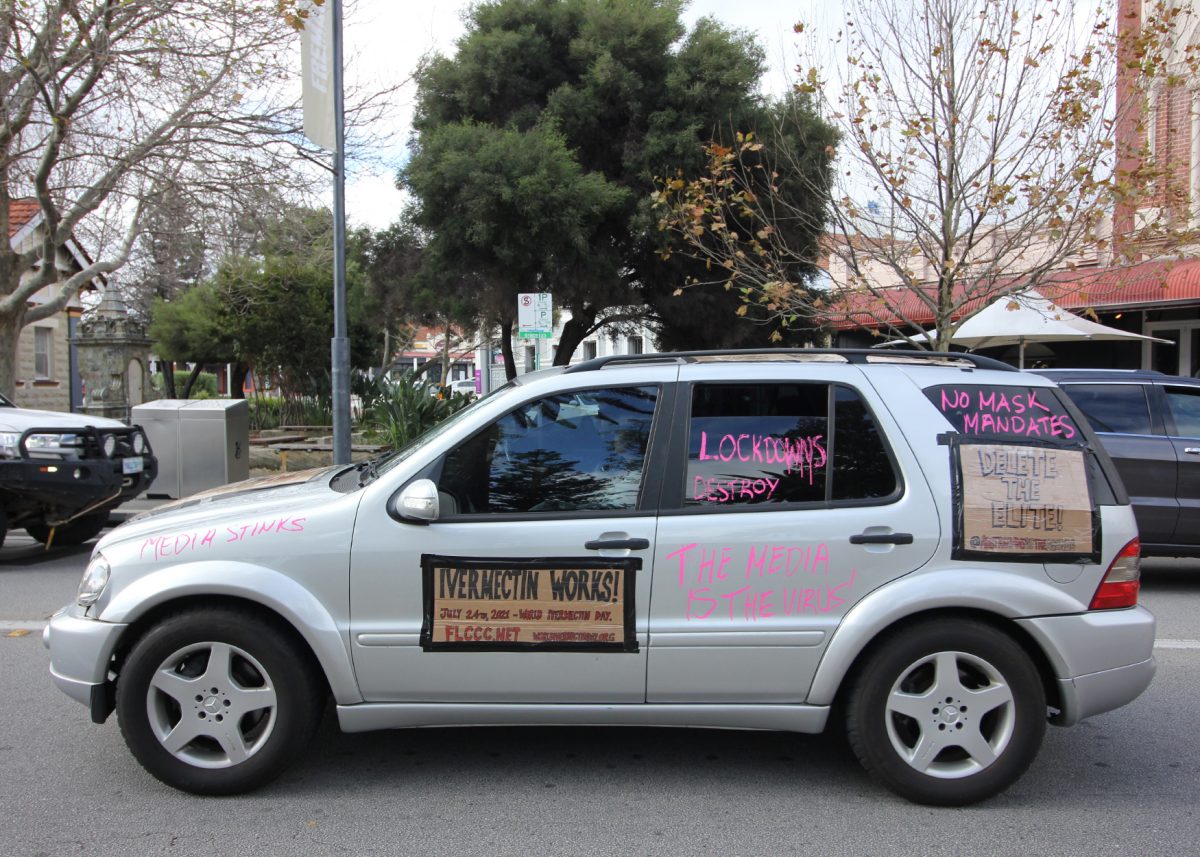 “We’re here to stop the lockdowns and help local small businesses get back on their feet by opening up the country again,” a protestor told the Shipping News from behind the wheel of one the thousand cars choking downtown Fremantle and encouraging shoppers to abandon their retail activities in local stores and head out onto the streets.

With simultaneous demonstrations taking place across the nation, protesters in Australia’s Eastern States grappling to contain the latest viral outbreak, including New South Wales and Victoria, ignored stay at home orders on Saturday and took to the streets of their major cities on foot. Protestors in Western Australia however compliantly heeded Premier Mark McGowan’s continued call for social distancing, electing to be COVID-compliant and use a procession of vehicles instead. 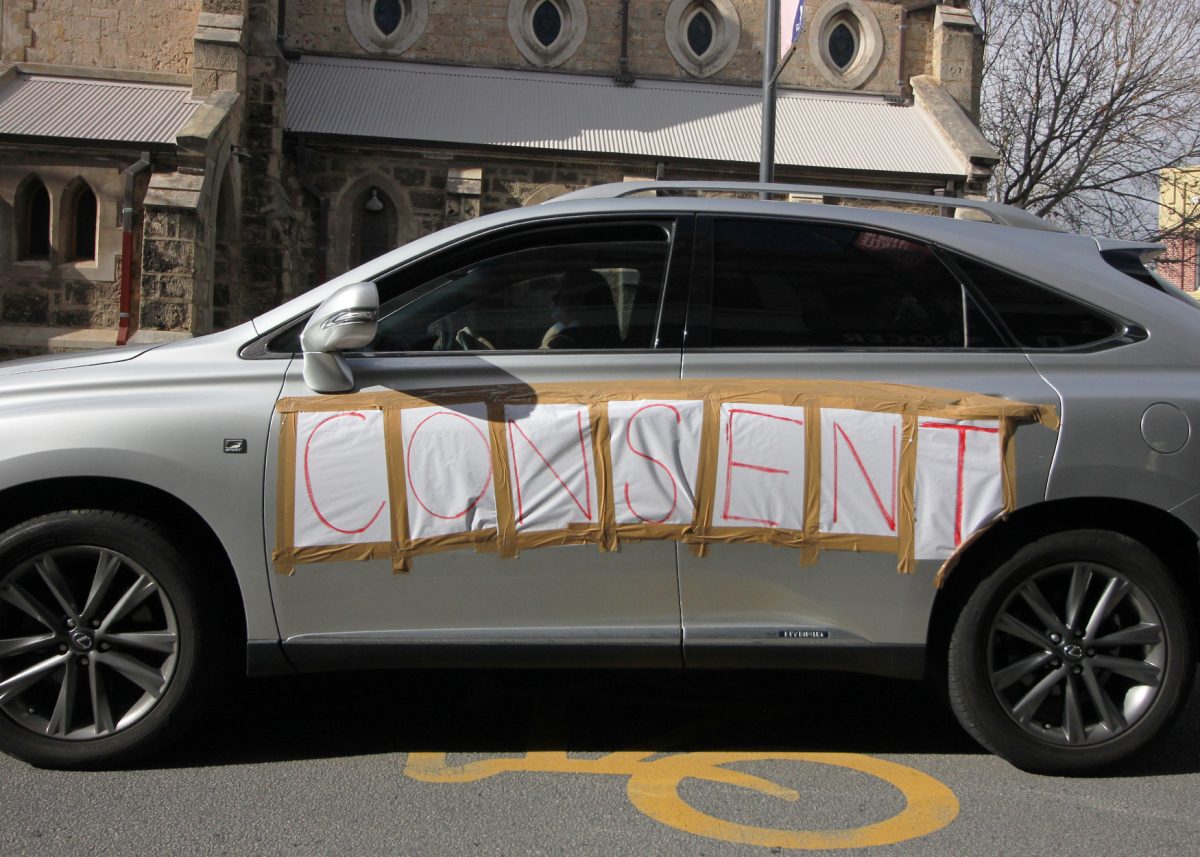 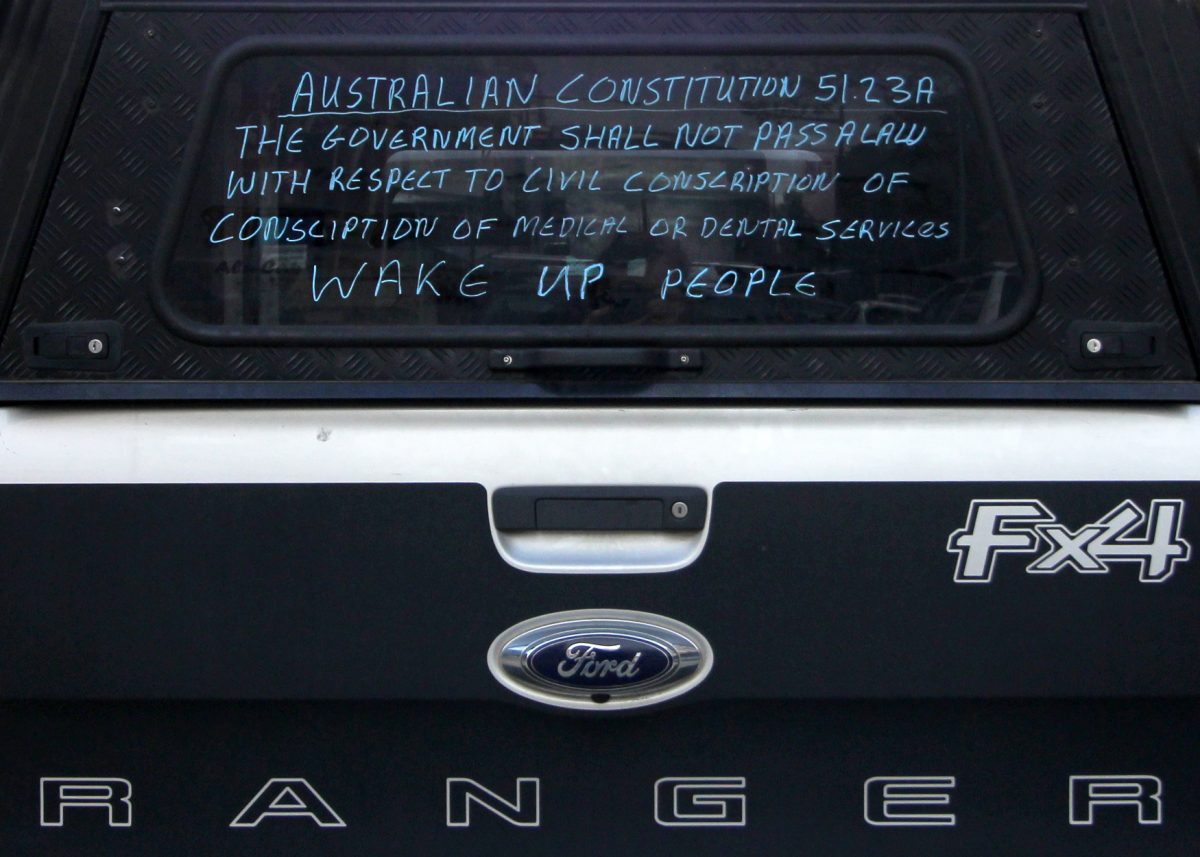 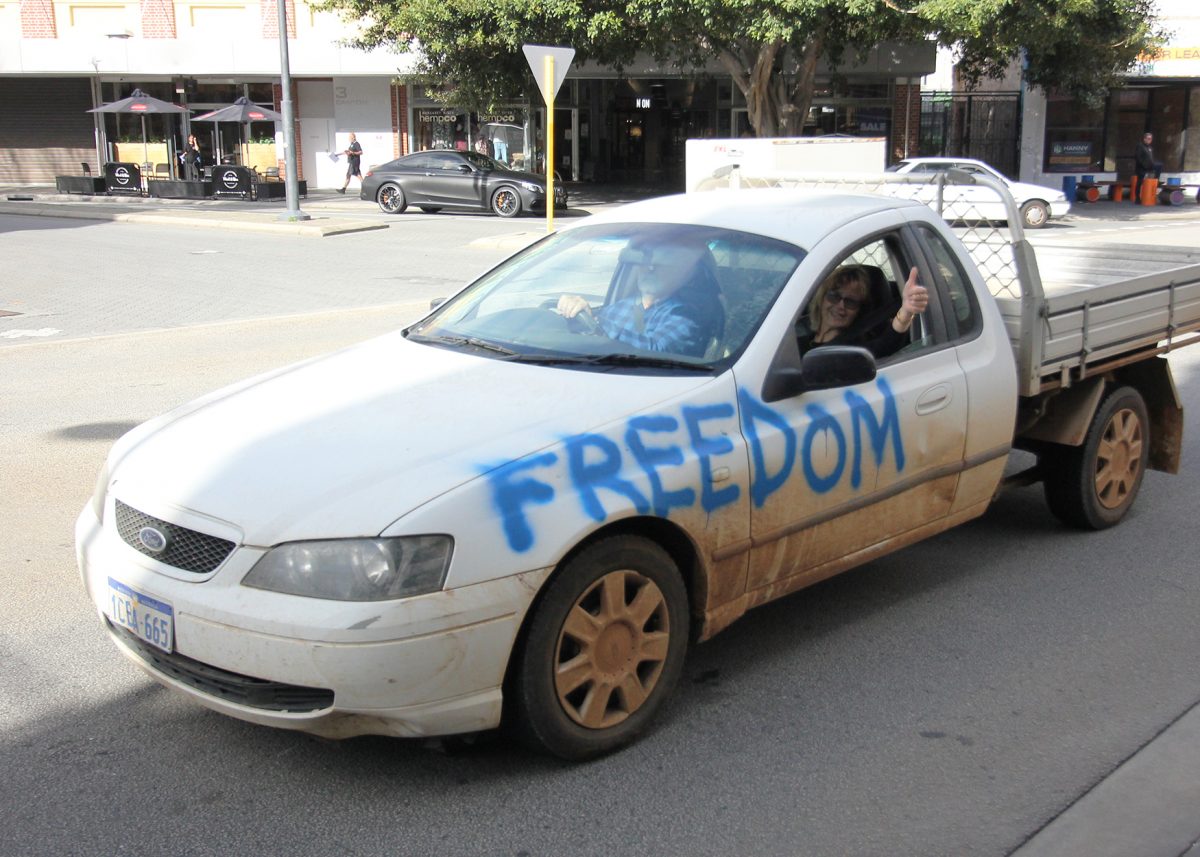 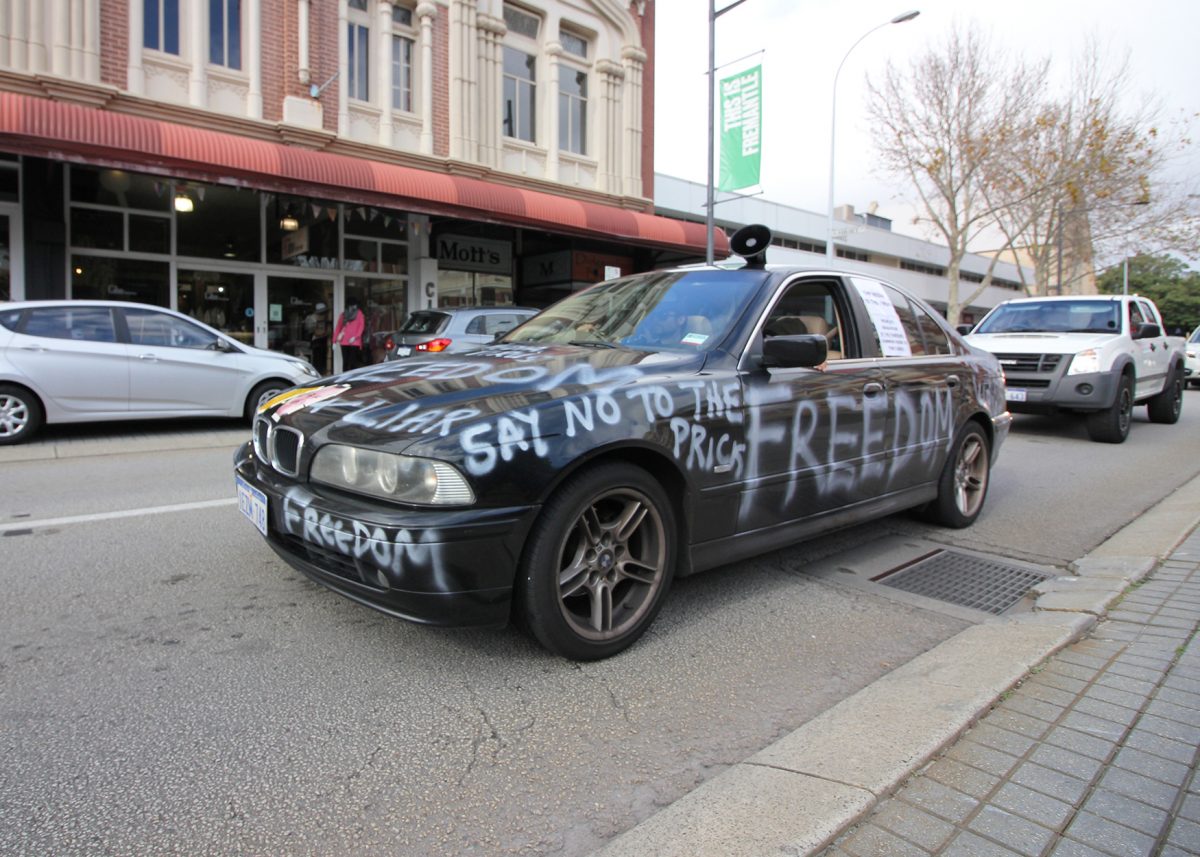 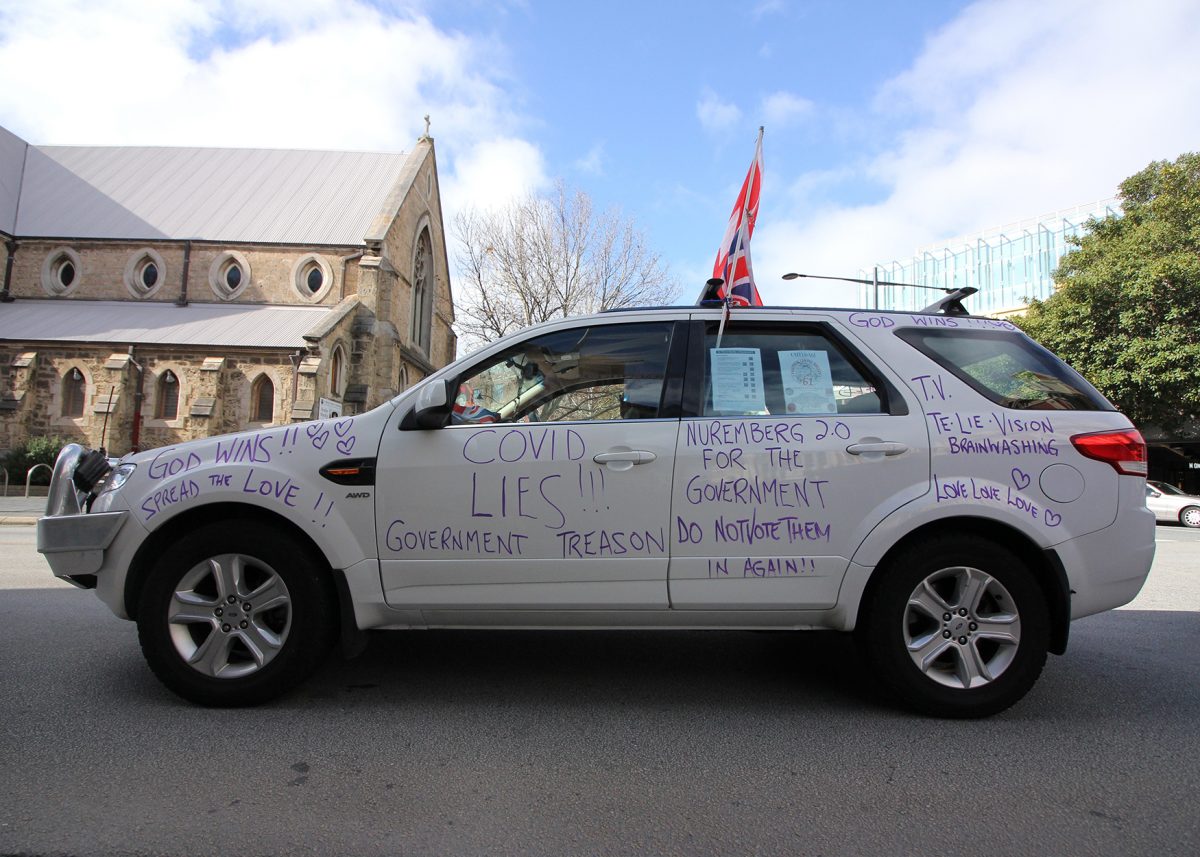 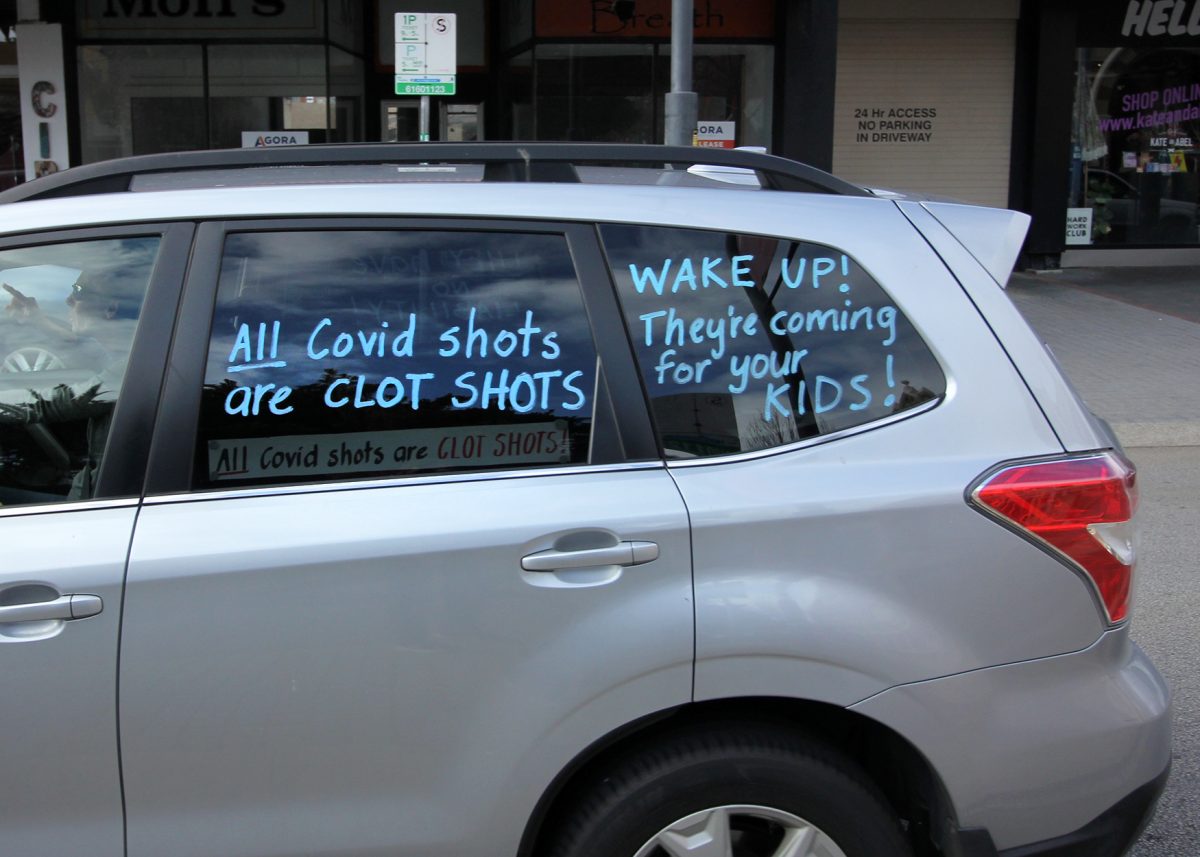 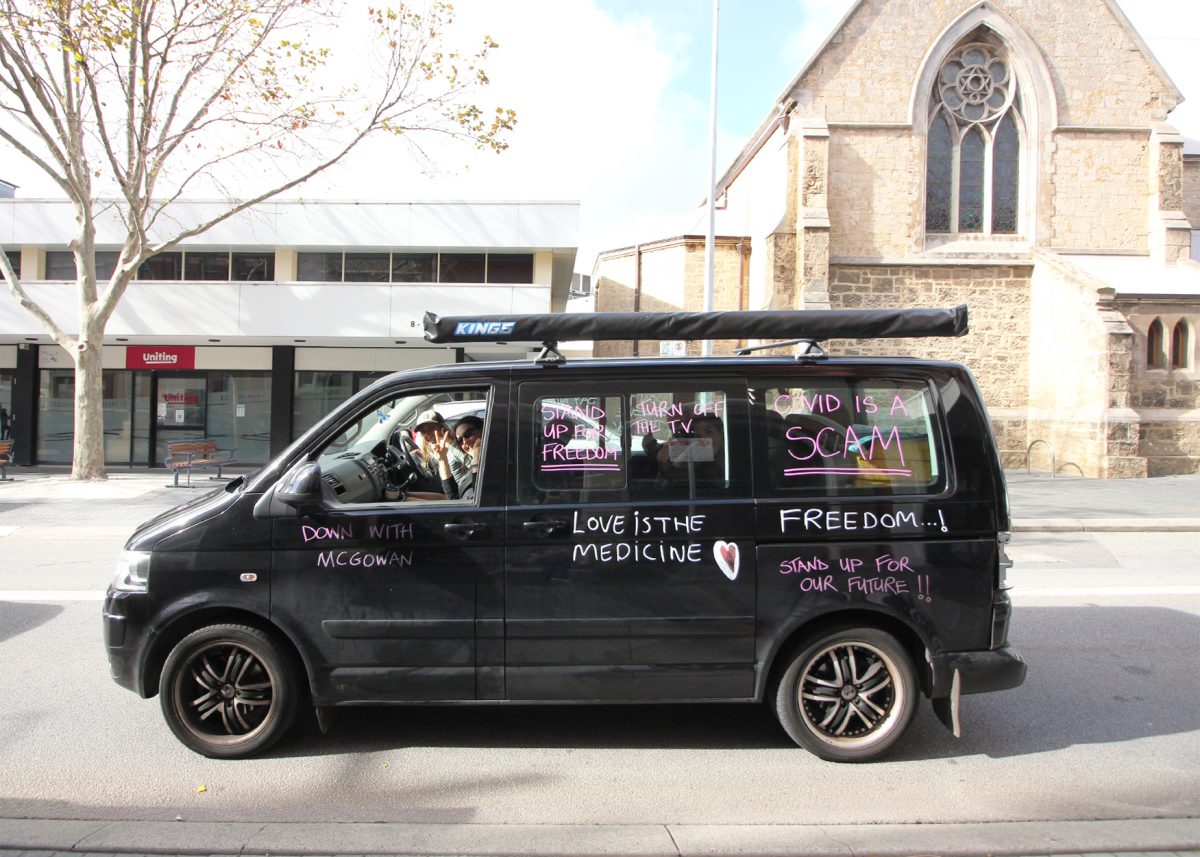 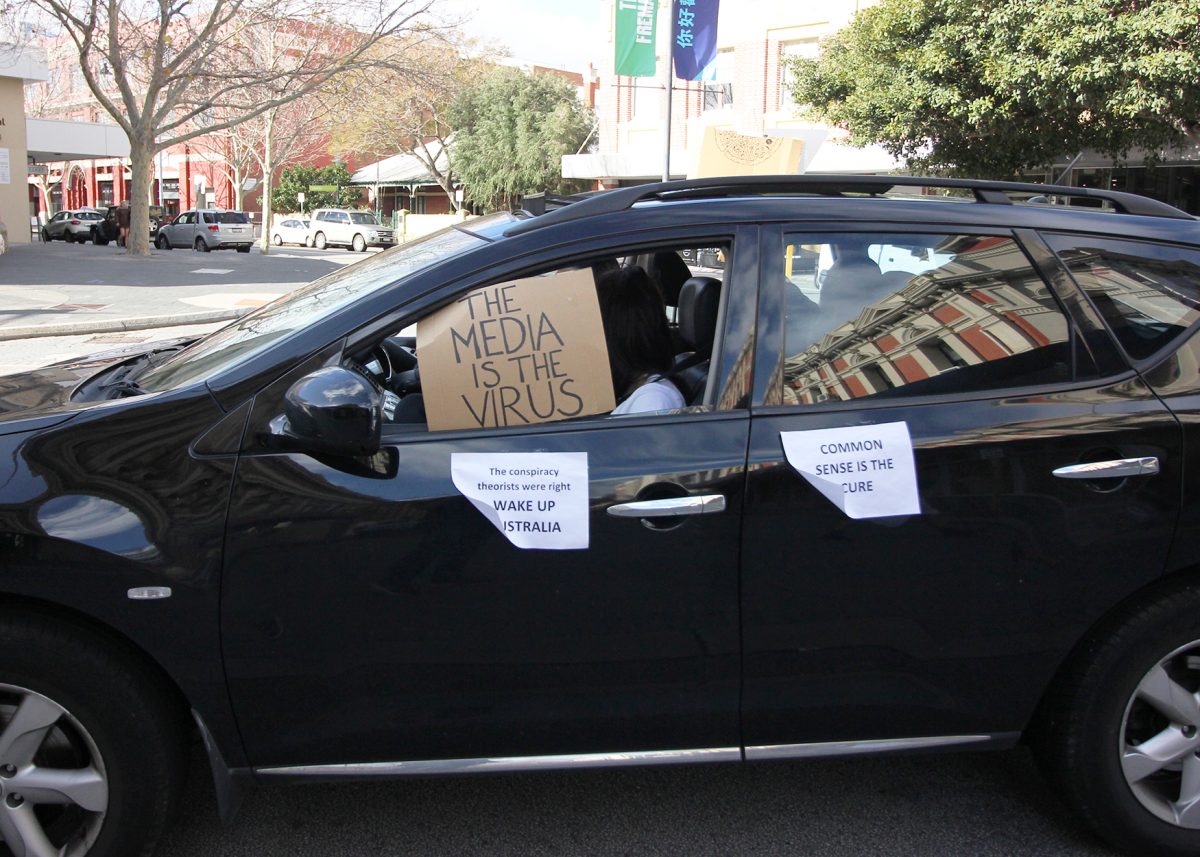 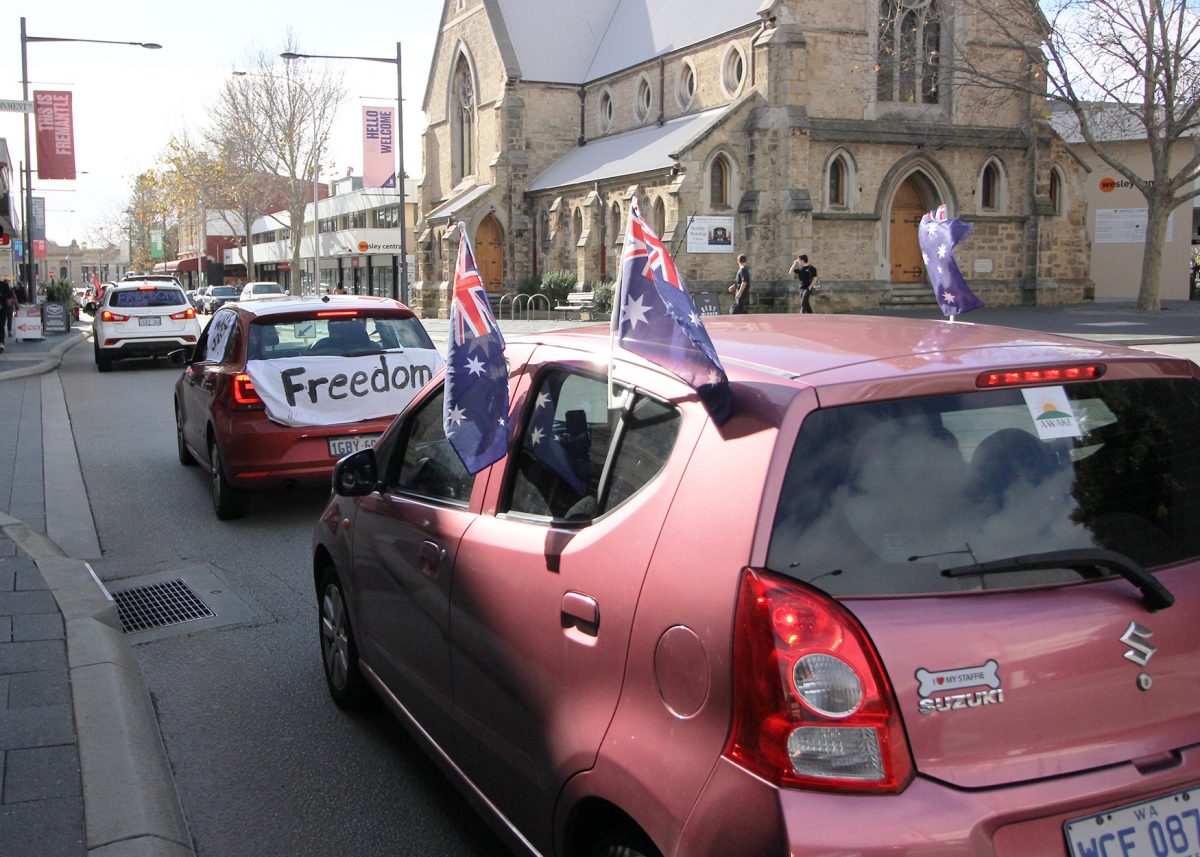 “We love our cars here in the west,” observed one protestor, who then added: “And it’s so bloody expensive to park in Fremantle. We were going to meet and demonstrate here at the Esplanade but then we would all have to find parking and people could get distracted by all the wonderful places to eat and drink down here. But, to be honest, I don’t think anybody here really wants to inject tens of thousands of much needed dollars into the local economy at a time like this.”

A little further down the line of slow-moving vehicles, the occupants of which ingesting all manner of dangerous exhaust toxins into their bodies, was a 32-year-old man from Hamilton Hill driving a car adorned in West Coast Eagles flags.

“I heard all the honking and thought we must have beaten St Kilda already,” said the man, referencing Saturday’s West Coast versus St Kilda match. “I jumped in the car and joined the parade to celebrate. It’s been a tough year and I wanted to show my support. I did think it was a little weird we were heading to Fremantle, but I figured since they’ve moved to Cockburn, Freo’s now Eagle territory too.”

A sign that initially raised great conjecture among curious onlookers lining the thoroughfare was a hand-scrawled message pasted to the window of a white ute stating, “For Sale. Cash. $12K”. What many enthusiastic activists interpreted as a plan to remove Western Australia Senator the Honorable Michaelia Cash from federal office, turned out to be an advertisement for the driver’s 2001 Toyota Hilux

“I’m just trying to sell my ute,” said the man, who was quick to deny any political intent. “It’s got high mileage but I think it’s a fair price for someone willing to pay cash. I figured with everyone down here watching the demonstration I might find a buyer.”

A middle-aged woman from Rockingham, who was protesting with her husband, held a far more astute message out of the passenger window of the couple’s sedan.

“We are not guinea pigs,” read the sign, an obvious reference to the rarely confused anatomical differences between rodents and humans.

“I’d have to agree with that,” admitted a female supporter of the languishing campaign to vaccinate the nation, who was watching from the footpath as the vehicle passed her by. The woman observed that Caviidae are characteristically very socially-minded animals that are also herd orientated.

* This article was written by Brett Leigh Dicks and the photographs are his too.