It’s Official – The ‘King’ has departed, the ‘Koort’ has arrived!

Sounds a little like a revolution in some far-off land, doesn’t it?

Well, in many good ways that’s just what it is.

Yes, ‘Kings Square’, as named by the English settlers soon after their settlement of Fremantle in 1829, without any regard to Noongar people or their local Whadjuk law and culture, is now officially ‘Walyalup Koort’.

The King has departed, the Koort has arrived!

The City of Fremantle has advised that the State Minister for Lands has given formal approval to the recent decision of the City to rename all of Kings Square to Walyalup Koort.

The naming proposal was considered appropriate, with the origin of the Whadjuk Nyoongar name to be recorded by Landgate as:
Walyalup Koort (heart of Fremantle) – Walyalup (Wal-ya-lup) being the name for the Fremantle area and Koort (koo-rt) being the word for heart.

These things take time – just on 192 years to be precise – just as the redevelopment of Kings Sqaure as Walyalup Koort is taking time – though not quite that long. Covid and builders going broke don’t help of course. But the Koort of Freo looks to be getting mighty close. Here’s a snap of how things stand, as we speak! 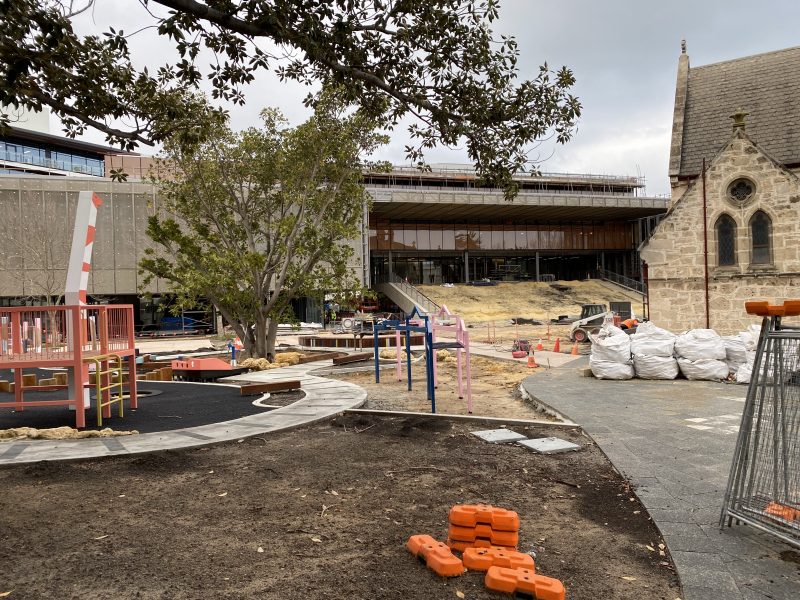 Formal acknowledgement of the renaming of the Square is now being planned by the City, along with the opening celebrations for the Walyalup Civic Centre, new play space and public realm – some of which you can see in the photo.

As part of their decision, the City is soon to examine options for remembering and/or explaining the previous names of the square.

It is wonderful all this has happened in time for the celebration of NAODOC WEEK this week.