The sale through an EOI process of the old, heritage-listed South Fremantle Power Station has captured everyone’s attention.

Just what happens in this process? Who controls it? Are the right government people involved? Are they sure to recognise the public trust involved in the sale of this iconic public asset?

Tomorrow, 2 July 2021, is the last day you can lodge your Expression of Interest to buy the heritage-listed South Fremantle Power Station.

Then begins the State Government’s task of sifting through and evaluating the EOIs and, after that, negotiating a sale contract with a preferred purchaser.

How exciting. How daunting. What a public trust.

We here at the Shipping News are fascinated by, well, that may be too strong a term, let’s just say very interested in the EOI process to be applied by Synergy to the sale of the South Freo Power Station, as well as by the actual sale negotiations that will follow it.

Truth be told, apart from the East Perth Power Station, there appear to be few precedents for such a process. The real estate, land development and legal boffins who advise Synergy will all have their thinking hats on as we speak. We are now at the pointy end of the EOI and sale process, the Minister for Energy, Bill Johnston and Synergy’s Board of Directors having initiated it.

Here we have an iconic, old, mid-century, coal- and then oil- and then coal-, again, fired power station that will forever remind Western Australians, and particularly Fremantle and Perth people, just how electricity was generated to run our post WW2 industry and businesses and homes.

On top of that we have a beautifully designed and proportioned building, so light-filled, to be enjoyed by generations to come. Truly a rival to a majestic European cathedral like Notre Dame in Paris or York Minster in England. Or the one you have in mind as I wax lyrical! Now, I suspect you think I’m going a little overboard here. True. But only a little. The Power Station is a modern delight. Freo’s answer to Council House in central Perth. Only better! But I accept that appreciation is largely, if not wholly, in the eye of the beholder. 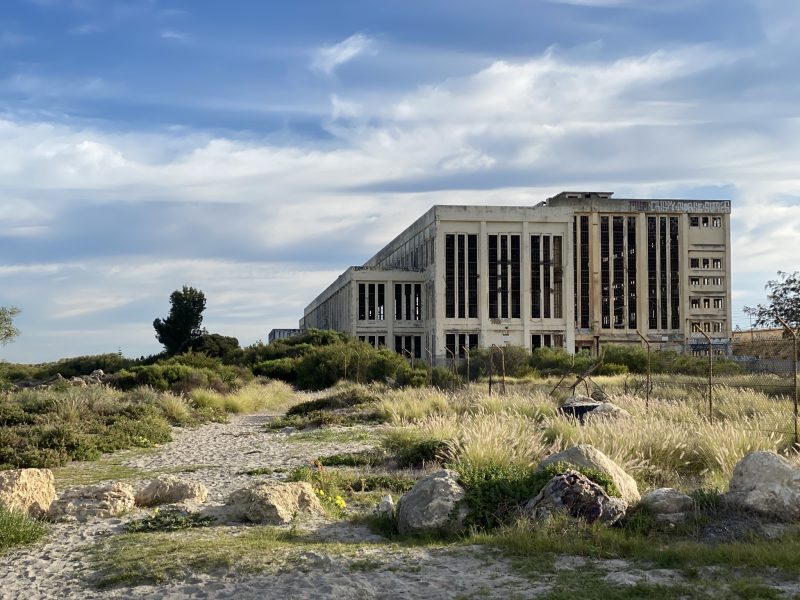 Back to Synergy’s EOI process for selling off our Cockburn Coast icon and the sale that follows.

When, as a public agency, you sell an iconic, heritage, State-owned building to a private sector owner, you sell on behalf of we, the people of the State. You have a public trust, an obligation, to ensure that, after the sale, the new owner can’t just put the proverbial wrecking ball through the icon and propose something like the construction of a wave park. Not a serious idea that – it just came to mind. But it’s meant to make you think.

The point is, how do you go about giving away the iconic public asset, inspire a private owner to treat it as its own – and make a profit from its re-use or redevelopment – but not jettison the public interest ‘ownership’ of the site – in this case, the public desire to see the site rejuvenated as an iconic, heritage building, and a tourist destination with a significant public realm.

In this case, the private profit comes from the subdivision and sale of the land all around the icon as apartments with ocean views and well located homes right on the Cockburn coast. Measuring the likely profit involves, in very broad terms, calculating how many residential apartments and lots you can sell for how much, plus the value of the commercialisation of the Power Station component, and then deducting therefrom the transaction costs of the exercise, which include the costs of remediating the site by removing all the contaminants (we understand the asbestos has already gone) and then restoring the Power Station to the heritage standards required by the Heritage Council of WA.

(I, for one, would love to see the smoke stacks returned, even if faux ones. They were such an integral part of the old building. A Ross Shardlow sketch of the old Power Station would provide a good blueprint for how it should finish up!)

But I digress, ever so slightly. 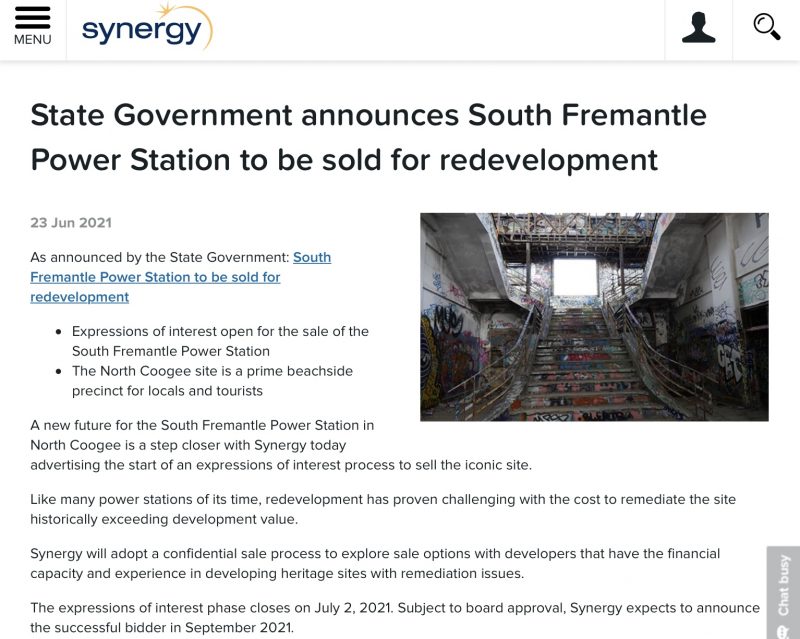 Governments everywhere in the country use EOI processes for the acquisition or sale of all sorts of things. It enables them to test out interest, to foster competition, to find the best in field, to get the best results for whatever it is they are wanting to do.

Synergy is no exception. It has used the process in a number of contexts, for example the renewable energy area.

Here’s the Introduction of an EOI Synergy used in relation to a WA based solar generation power station project.

‘3. INTRODUCTION
3.1 Purpose of this Invitation
The primary purpose of this Invitation is to invite Respondents that intend to make a submission to the Solar Flagships Program to express interest in potentially entering a commercial agreement with Synergy for the supply of Capacity Credits, electricity and Environmental Rights arising from a WA based solar generation power station.

‘The Respondent that intends to respond to this Invitation must have a project concept that is to be located in Western Australia and connected to the South West Interconnected System. This Invitation does not exclude a Respondent from submitting a response even if the Respondent does not intend to make a submission to the Solar Flagship Program provided that the Respondent meets other criteria outlined in this document.

‘Synergy intends to invite Preferred Respondent(s) to enter into negotiations or to participate in a tender process. Subject to agreeing suitable commercial terms and other criteria the parties may enter into an ESC(s).

‘Synergy stresses that it will only consider entering into an ESC on the basis that the Proposed Project offers commercial terms (on a risk adjusted basis) that it assesses to be better or comparable to the alternative means or options that it has available to satisfy its requirements for Capacity Credits, electricity and Environmental Rights.

‘Synergy will create a shortlist of Preferred Respondents as a result of this Invitation and will write a letter of support to assist their intended submission(s) for funding under the Solar Flagships Program.

Now we are not saying that this is what is in the South Fremantle Power Station EOI documents or detailed process, as we are not privy to it, but it is useful for present purposes because it emphasises the nature and purpose of the process and its likely direction in this case.

It is at the last step, the sale terms negotiations, that one assumes things become very, very serious.

In the result, we can expect a very carefully drafted contract for the sale of the site that ensures that all the public goods – like retention on the building; it’s heritage restoration to agreed standards; the decontamination of the site; the provision of public spaces; the maintenance and upkeep of the developed site; financial contributions to public transit means by train, light rail, or bus; and the like – are realised.

A contract like the one we, the people, can and should expect will require the purchaser of the site to be bound by clear and enforceable performance standards and bonds, including for things like times for completion of all the components of the works, as well as performance bonds that apply after the work is completed and in respect of continuing maintenance obligations. No doubt there are many others.

The contract also needs to cover off the potential for the new owner to rely on the Covid planning legislation, which expires on 6 January 2021, and seek a watering down of standards presently required under the State’s Heritage Act, Contaminated Sites Act and the City of Cockburn planning scheme and 2014 Masterplan for the Power Station, as discussed in our recent article. 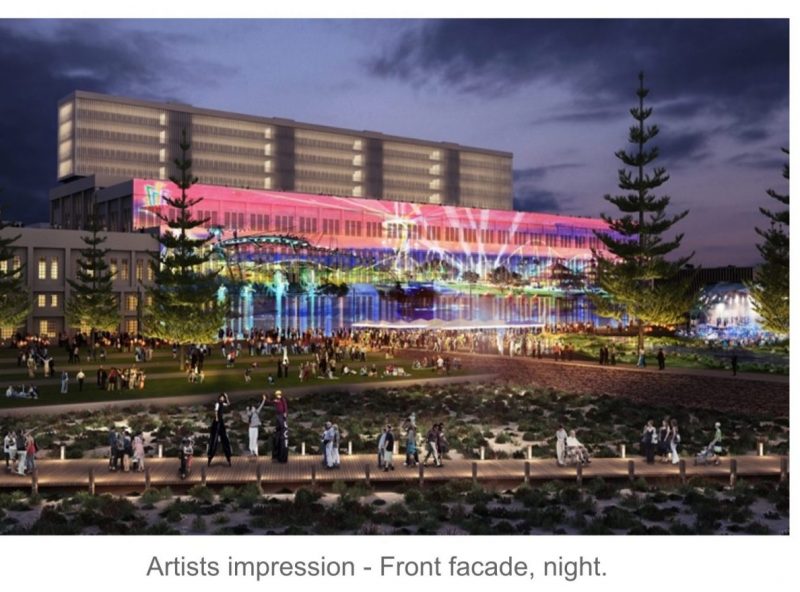 The last thing that we would want to see is an under-standard, botched job that results in years of trouble, strife and litigation down the track at great expense to the taxpayers.

One suspects no incumbent Government wants that to happen either. Should it, their reputation would be seriously tarnished and their chances of re-election significantly reduced.

Currently the EOI process is in the hands of the State Government through Synergy and its advisers. They have experience, no doubt, in acquiring and selling services and commodities, but we remain concerned that Synergy has no track record in heritage preservation, community planning and the other public goods that must be safeguarded to meet the public trust invested in it on this sale. As we remarked in our recent article, it has been on Synergy’s watch that the Power Station that been reduced to its current state of neglect.

That said, we note that while the Board of Synergy ostensibly made the decision to sell the Power Station and will sign off on any sale, the Minister for Energy, Bill Johnston has a general power, under s 111 of the Electricity Corporations Act 2005, to give the Board written directions in relation to most functions. It may reasonably be assumed that the Minister indicated his assent to the resolution of the Board to sell the Power Station and that there will be no final sale by Synergy unless the Minister also assents to it. Plainly the Minister has the power to direct the Board not to ratify a sale the terms of which deny the public trust that Synergy bears in conducting the EOI and sale process.

Just the same, we’d feel much more confident about the conduct of the EOI and sale process if the Minister were to assure us all, without delay, that those State agencies with a deep understanding of the public trust issues we have identified, will be actively engaged in the whole EOI and sale process from the get-go – as of this Saturday.