Home 2021 June 17 Enough is Enough – How To Close Down The Stolen Bike Business?

Enough is Enough – How To Close Down The Stolen Bike Business?

This week we posted a story on The Stolen Bike Business around Freo.

There are so many reports of bikes being stolen, bikes big and small, pedal and electric, some like small cars, some belonging to kids, some to people who have no other means of transport, many if not most uninsured, many locked but to no avail, and so on and so forth.

Our story has received an enormous response.

The big question everyone is asking is – how do we, the community with the help of the State Government, WA Police and local government, stop the incidence of bike theft or at least meaningfully reduce it.

In our story we featured the Facebook post of Sharna Terase concerning the theft of her amazing bike. Sharna’s story makes you realise that when a person’s bike is stolen, the ramifications can be quite devastating, both materially and personally. 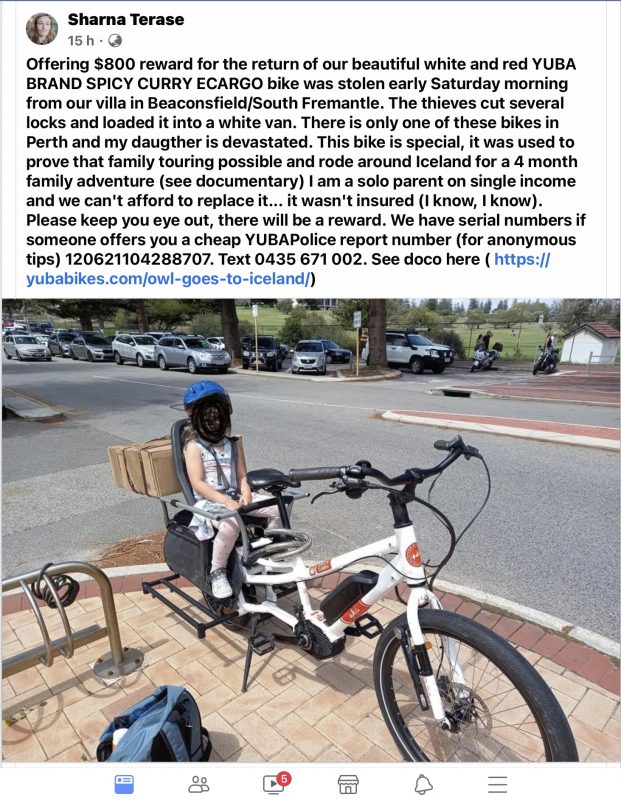 Here’s Sharna’s story in a little more detail and what she believes needs to be done. We thank her for sharing it.

‘I’m a solo parent who: works full-time; puts my kid through private school; owns my own place; and pays my taxes. I do not have it easy but I do not complain – I patiently save and deploy patience and discipline to get by, I contribute to charity and community events. I am kind to my neighbours and work for non profits.

Whatever your karma, however, does not seem to shield you the rampant theft of private property that pervades the Fremantle area, or exposure to the increasing sophistication and boldness of the thieves involved. They have tools, and can seemingly get through any locking device or past any barrier, they work in gangs and they have no scruples to effectively target, case and steal any expensive item not inside locked inside a home.

My electric cargo bike was targeted on the weekend, and despite being locked to my outdoor setting with purportedly unbreakable locks, they simply cracked the locks, and picked up the 45 kg bike, locked to the chairs, as well as my basket, panniers, my daughter’s helmet, and a fair chunk of my humanity with them. We were terrified, 3 metres from it happening. The police still haven’t been over because they didnt ‘break into our house’. It was just a bike.

Well that bike was a 9000 e cargo bike, designed to replace a car that I saved for 4 months for. When I put up a reward advertisement, people reached out by the dozen saying they had also lost their very expensive cargo bikes, along with boats, cars, trailers, caravans, all in very brazen incidents that are often in broad daylight. Everyone I speak to has a story – of disrupting someone in the act of stealing their bike, of witnessing cars backing up to trailers with caravans or boats, of waking up to bent shed doors as thieves had looked in the shed. People advised me to bring my bike into my home – apparently, thats simply what you do here. It’s universally acceptable to live with bikes cluttering your kitchen, hallway or loungeroom while thieves roam unchecked throughout your backyard. Locking your bike to backyard furniture clearly doesn’t work.

The point of my story (and fury) is that I am a humanitarian worker who has worked on every continent and visited more than 50 countries. Only in East Africa have I met such apathy – where the onus is on the individual to invest in as their home security, and I expect it there where: a) I am white and paid at least 5 times the local salary; and b) the local police are paid the equivalent of USD 300 per month. As a middle income earner here however, Im sorry, but I expect better, in a society that pays 30-49% income tax, has GST, and has an (extremely) well funded and well armed police force (not to mention ever so vigilant street parking brigade).

I want the local government to step up and invest in reducing local crime. Enough is enough.’

Sharna says she wants a solution based response to the bike theft phenomena and suggests the Government and Police should mandate transparency around serial numbers for selling more expensive bikes (or any bike) and also start disaggregating statistics to shed light on the issue and inform better choices. CCTV footage, creating task forces etc are other ways she believes we could deal with the issue. As Sharna says, bikes today are often almost as expensive as cars.

Klaus Stiller, a former Freo area resident now living at Rockingham, has also been in touch with us. He has told us of the three electric bikes he has had stolen from various locations around Freo. As he points out the bikes are not cheap and while one can take out insurance, it’s not cheap either and the cost of insurance plus the usual excess amount you have to pay when you make a claim makes insurance not a very useful cover for a stolen bike.

Klaus believes it’s not beyond our ken to develop a reliable and inexpensive tracking device for bikes, just as we have for many other devices these days, including computers and smart phones.

Klaus brought to our attention how bike locks are getting more sophisticated to try to counter the thieves. The one he now uses has an alarm inbuilt so that it goes off as soon as someone tries to remove the lock or even carry the bike away.

Sharna and Klaus, of course, are not alone. We are aware of people whose good bike locks have been cut with angle grinders in order to steal the bikes.

So who is doing the stealing?

While some thieves seem to be opportunistic – they see the bike and for whatever reason take it, sometimes dropping it off later in a public place – many are not. We suspect there is a market for stolen bikes and that many thieves are taking advantage of it.

We get the impression from inquiries made that there are well organised gangs that steal bikes around Freo area and drop them off at proverbial ‘Chop Shops’ where the bikes are pulled apart and then put together again in ways that make the original bike hardly recognisable to the original owner, and then sold on ebay and the like. The only bit that the original owner might recognise is the frame. Everything else is sourced from other stolen bikes.

We also understand the Police are onto this business model. So that’s good news.

But what as to the future?

* Law enforcement is one thing. Trying to stop the stealing or significantly reducing it is another.

* CCTV is another idea often raised. It’s perhaps something that might dissuade would be thieves if they know they are on camera. And it may assist law enforcement. But it’s not fool proof. And it’s not so good at night, one fears.

* Bikelink registration of your bike is another. It may mean you get some part, if not all of your bike back when it’s found. Perhaps all bike parts should be marked.

* Tracking devices fitted to bikes is another good sounding idea. Makes sense. Is it practical? We don’t know.

* Licensing. Another interesting suggestion is that all bikes should be licensed, carry a number plate even – as they had to be when some of us were kids. Licensing would not be a money making exercise for Government, but a means of verifying that the person who is selling the bike – on ebay, at the local pub, or wherever – is the owner. Just as you do when you sell and buy a motor vehicle. There wouldn’t be a licence fee of any significance. The system would simply be there to try to stamp out easy sales of stolen bikes.

* Regulating the sale of bikes on ebay and the like. This wouldn’t be needed though if there were a licensing system in place.

* Sharna’s idea for a task force to look into solutions is a great one.

We are sure there are other good ideas out there in the community and a task force could come up with sensible, practical and workable solutions.

Many will remember when there seemed to be an unabated period of car theft back in the late 1990s. The WA Government, and others around the country took steps to make the hot wiring of motor vehicles difficult by bringing in immobilisers.. The capacity to steal them was thereby significantly reduced.

Lateral thinking like that is again required – this time for the popular, 21st century bike.

Certainly something needs to be done. The incidence of bike theft seems high, although the Police don’t have easily accessed statistics for Fremantle or the State. The effects of bike theft on people plainly is palpable. We have a real community policing issue on our hands. We need the Government, the Police and local government to lead the response in finding lasting solutions to it. 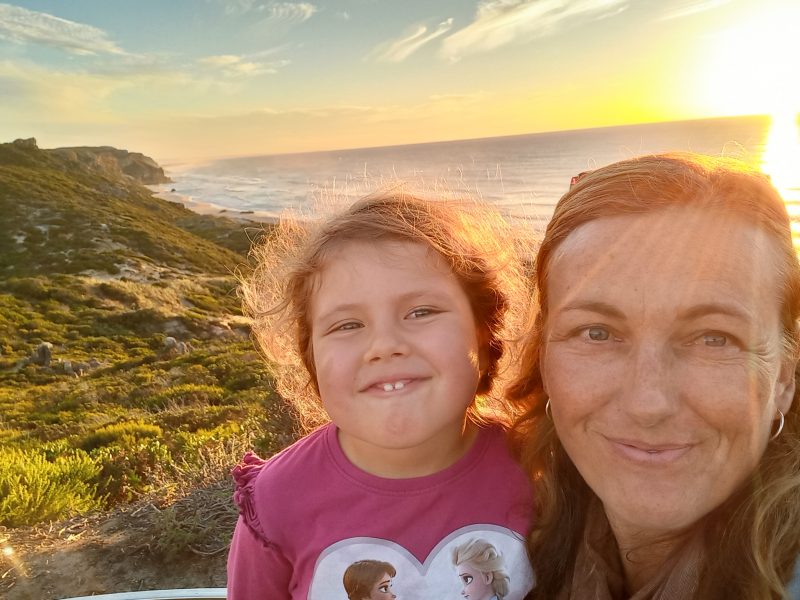 Sharna has now started up a Petition online calling for action.

We now look forward to hearing from elected representatives.

This article was written by Michael Barker