Friday on my mind – A Sense of Place

Well, where to start?

Perhaps with a warning. I’m getting older. Not too crotchety, I hope. But maybe a little melancholic, even sentimental. I saw A Beautiful Day in the Neighbourhood with my 13 year old granddaughter last week and think Mr Rogers/Tom Hanks pretty much got it right. We need to be nice to each other. And when we’re not feeling quite like being nice, we should take a long swim.

Now let me tell you about last Saturday night. You see, I’m still imbued with the love that flowed at the second of the two Fire Aid concerts at Freo Arts Centre, held that night.

The setting, as always for a big concert like this, was on the Southern side. The stage was back against the James Street stone wall. The ghosts of inmates past could be sensed in and around the old asylum building on the adjacent Northside.

The crowd covered all ages. If you were new to the Freo area and wanted a quick intro on how things work here in the ‘Shire’ (as some apparently like to call it) a quick crowd count would have been instructive. Most demographics were represented.

The baby boomers, much reviled elsewhere but tolerated in Freo (after all they help pay the bills), were seated where my wife and I were for most of the evening – high up on the upward slopes to the East, behind the flat far from the stage, many on provided plastic chairs. Distance from the stage was of little importance to us. Making eye contact with the drummer from San Cisco or their lead singer was not an ambition we could any longer seriously entertain.

Those who did want to make eye contact with the drummer from San Cisco or their lead singer; or who fancied exchanging meaningful glances with Donna Simpson from The Waifs, or John Butler himself, over the dire state of the planet, were down on the flat, in the mosh pit, pressed up against the stage.

Somewhere in between, at the back of the flat and halfway up the slope, were to be found those too young to remember London Calling, and too old to fully get the super slick sounds of San Cisco – which I like to think I did. They spent much of the evening chatting quietly amongst themselves, as far as I could tell when we moved down amongst them to get closer to JB.

In the middle of the concert though, uniting all punters, The Waifs and John Butler did a great, up tempo version of Goanna’s 1982 classic, Solid Rock. I, at least, felt transported to another era, one where dreams seemed realisable and hope not redundant. It all came back in an instant –

You’re standin’ on
Solid rock
Standin’ on sacred ground
Livin’ on borrowed time
And the winds of change
Are blowin’ down the line.

Watching and listening all Saturday night I suddenly had this strong sense that the 70s and 80s are happening all over again. A few generations later the enthusiasm for generational change is stirring. Grandparents are encouraging their children and grandchildren to take up the cudgels of Climate Change action. Demands for an equitable distribution of resources on the planet, away from the 1%, are being seriously countenanced. The winds of change are blowin’ down the line. Anyway, that’s where my mind wandered!

The wonderful thing about Freo is that the winds of change also blow gustily around the City’s parks and gardens and streets. The freedom to think, and the encouragement to think, to be creative, to be innovative is what I think attracts so many people to Freo, not just to live here, but to be here.

Fremantle is so loved, I think, because of it’s openness and thoughtfulness, because Freo People aren’t overly judgmental – unless you seriously want to proclaim your climate change denialist credentials or support Trump. There are limits.

I must say, it’s the climate change denialists I find the hardest. It’s why I increasingly find it best not to stray too far beyond the comfort zone of what’s most familiar to me. But even then I occasionally encounter one or two of them. The best remedy is that advised by Mr Rogers: head for the beach and take a long swim.

Freo mostly makes me feel secure. Community abounds. For those of my demographic, Freo is really a sophisticated retirement village. Movies are close. There are young people and dogs everywhere. Family doesn’t mind visiting. Golf course and Pickleball are nearby. And the beach is just down the road. Main problem is that there are too many coffee shops and cafes to choose from!

And perhaps best of all, apart from those who (rightly) fuss over Freo’s heritage gold rush buildings, no one much seems to care about what things otherwise look like architecturally or what unfashion people consciously choose to wear. South Fremantle and North Fremantle and their residents are probably the best cases in point, but all areas compete.

And on that note I will rest my case! 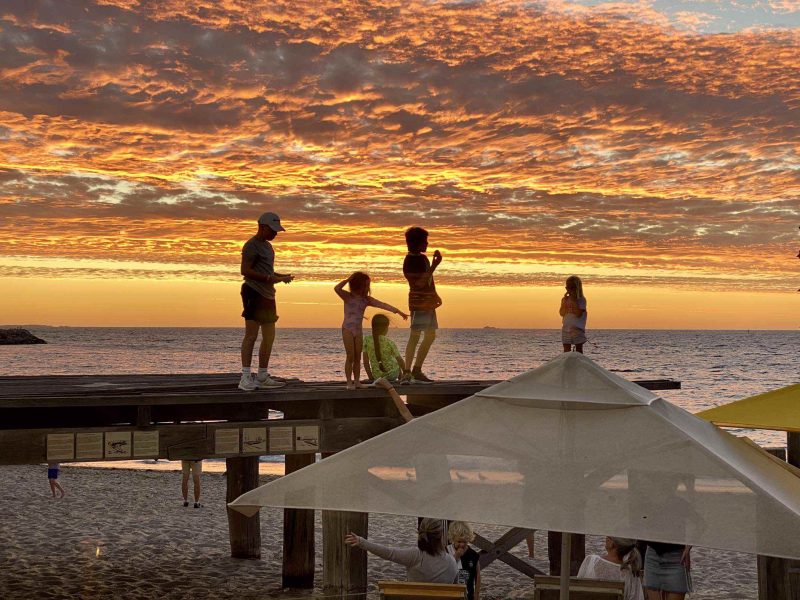