Home 2021 January 14 The Courthouses And Prisons of Fremantle

The Courthouses And Prisons of Fremantle

By Philip Eaton
Our Legal Correspondent

When the Swan River Colony was established in 1829, the colonists, all from the United Kingdom, expected that they would be subject to the rule of law. The Colonial Office in London intended the same. It was well known that the lands on which the Colony would be established had Indigenous inhabitants. The arrogance of imperialism contemplated that those people would also be subject to the settlers’ “rule of law”. What was intended was that, at Swan River, there would be all the institutions and administrative personnel of the English system the colonists had left behind. Those institutions included courts and prisons.

The first colonial court at Swan River was the Court of General Quarter Sessions established in Perth in that first year of the settlement. Three years later, in 1832, a Civil Court was established. In 1861, the Supreme Court came into being, taking over the functions of both. 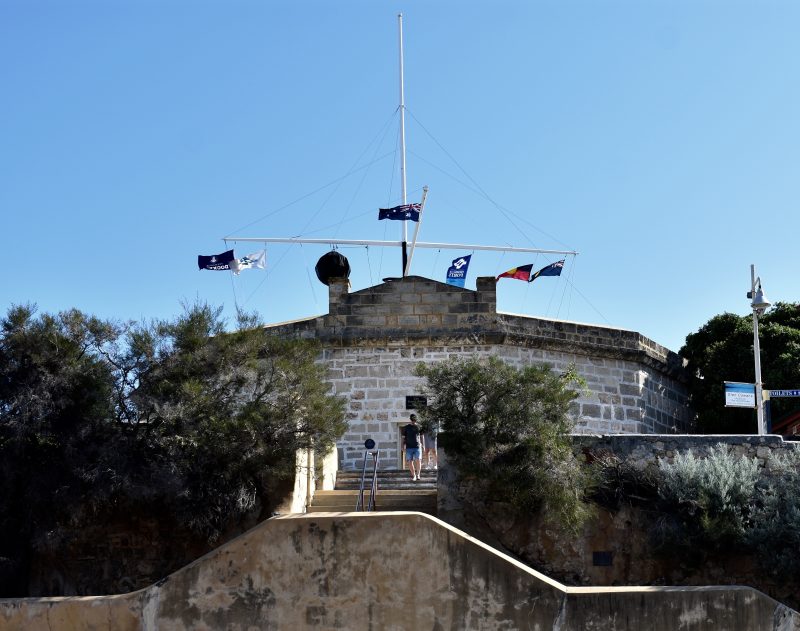 The Round House in Fremantle (pictured above, as it is today) was built in 1831 and was the colony’s first prison. A prison is an adjunct of the criminal law in that the system required that there be a place where those alleged to have breached that law, and those who had been found to have breached it, be detained. Although we might assume that crime was not a major problem among the settlers in the early years of the colony, it was inevitable that the imposition of the English system of justice, which included property rights quite foreign to the Indigenous population, would lead to Indigenous people being increasingly detained and being made subject to those laws. Too often they would appear in the newly built court buildings and be detained in the newly built prisons and lock-ups.

The first court building in Fremantle was built in 1835 on the southern side of Arthur’s Head. It apparently stood near where the historic Adelaide Steamship Company’s offices may now be found in Mouat Street (pictured below). 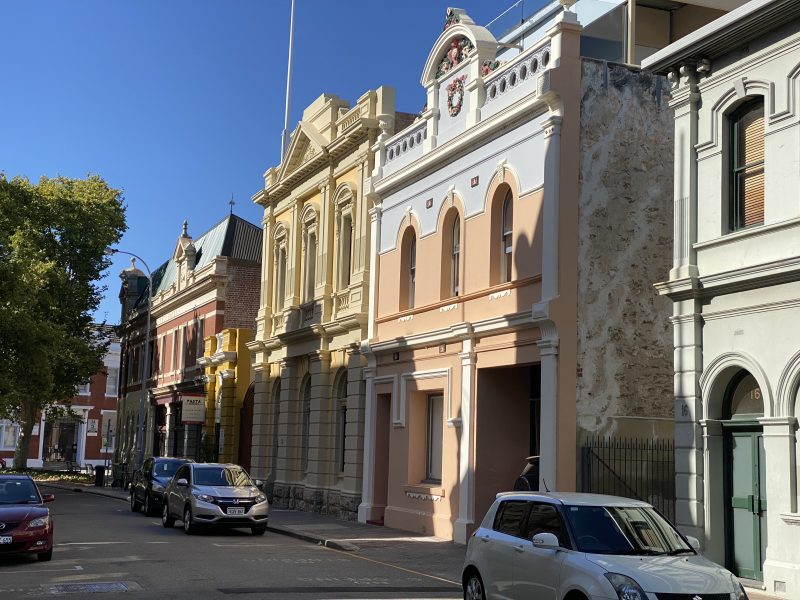 An early example of the operation of the justice system concerned a young white man, a Parkhurst boy, by the name of John Gavin (in some reports of the time referred to as ‘Galvin’).

Gavin was tried for murder before a jury of men in the Perth court and was found guilty. His victim was the 17 year old son of farmers at Dandalup. Gavin lived and worked on that farm as a farm labourer.

In accord with the law at the time, though only 15 years old, Gavin was sentenced to death by hanging. It was to be the first execution according to law in the new colony.

The execution occurred a week later, he place of execution being within metres of the Round House, where Gavin had been held. He was short and slight in stature so his feet were attached to heavy weights as he stood on a horse-drawn cart with a noose around his neck. At 8.00am on 14 April 1844, the appointed day and time, the horse and cart were led away and he died not long after. A small crowd watched in silence. The body was allowed to hang for an hour before being taken down. He was buried in sand hills south of and not far from the place of his detention.

The newspapers of the time reported on the trial and the execution. The circumstances of the murder were quite brutal, but it is apparent in the reporting that there was a degree of regret that the crime committed by ‘the lad’ or ‘the boy’ required that he forfeit his young life. We can walk today past the place of his execution and reflect on the harshness, even brutality, of the law at that time. How much more so was it for the indigenous population who found themselves victims of this newly arrived and imposed system of justice.

That first Fremantle courthouse was later converted into a residence for the Harbour Master and his family. (It is the building on the top left of the following old photograph). Local stone had been used for the two-storey structure. It proved to be poor building material. Despite considerable work on extensions and repair it was never a very satisfactory residence and was eventually demolished in 1928. The demolition contract also included the Round House but despite commencement of its demolition, there was intervention and it was substantially saved. 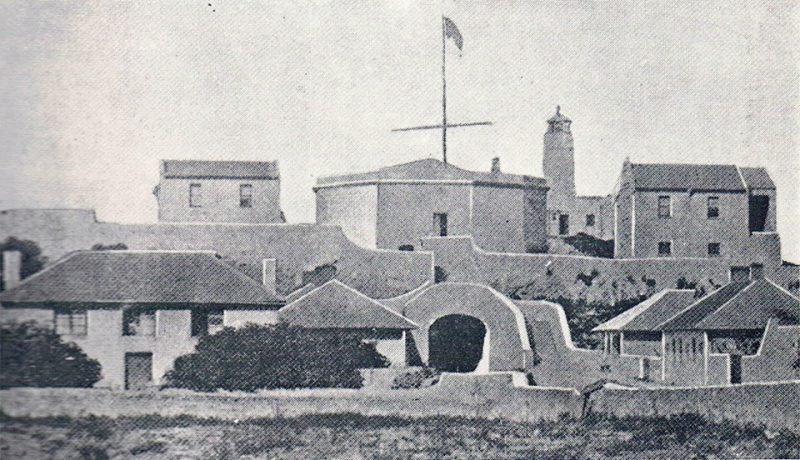 The second courthouse was built on the northern side of the Round House in 1851. (It is the building on the top right of the old photograph above).

Similar to the first courthouse, it had two storeys with a staircase running up the east and north walls and another on the west wall.

In 1869, the Resident Magistrate wrote to the Colonial Secretary stating that the building needed ‘whitewashing, colouring and painting’. He also complained that the roof leaked and that the ‘steps heading to the courthouse are much in need of repair’. The Clerk of Works at Fremantle recommended that the roof be shingled by contractors, using ‘she oak of the best description’ and that the steps be repaired using convict labour.

Correspondence between Harbour Master Croke and the Colonial Secretary’s office in 1869 indicates that the basement was divided by a wall and that his office was on one side, with a ‘dead house’ (morgue) on the other. He complained that when there was a body in the dead house, his office was ‘unbearable’ and that the ‘residents of [his] quarters felt quite sick from the stench’.

After 1881 the building was converted to quarters for the ‘Harbour Master’s crew’ (pilots). It was then used for a short time around 1885 for ‘Engineers … at work in connection with harbour works, surveys, etc.’. In 1888 the West Australian carried an article which read as follows. ‘The old courthouse on the Lighthouse Hill Fremantle, has been renovated and reconstructed into comfortable quarters for the use of the pilot crew from Rottnest when they are compelled to stay overnight in Fremantle.’

That building was demolished in 1904 to allow for the construction of cottage 9 (pictured below), built to house pilot crews following the demolition of quarters on land west of the Round House, which became a defence reserve. Remains of the second courthouse can now be seen under the front verandah of cottage 9. 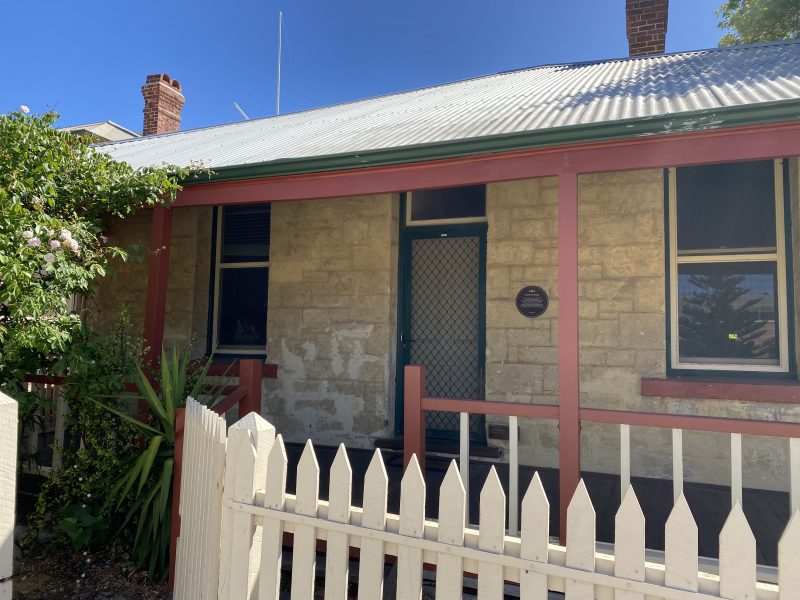 The third courthouse (pictured below), opened in 1884, still exists, in Marine Terrace. It is now part of Notre Dame University and is used by the Law faculty as a moot court. 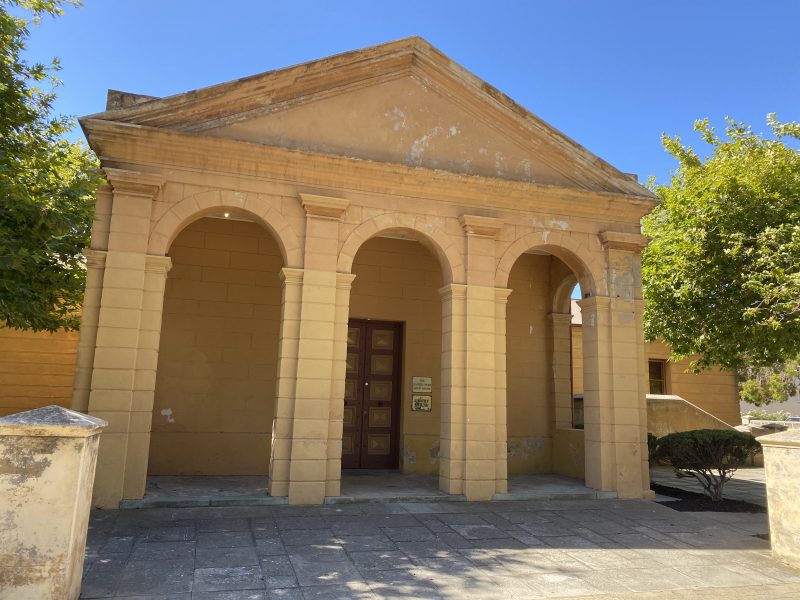 In June 1899, a fourth courthouse was opened in Henderson Street, Fremantle. It’s still there, though no longer playing a part in the administration of justice. Its future seems likely to be part of the Fremantle hospitality scene following the grant of development approvals over the site. The building is flanked by the historic warders’ cottages and police barracks (as pictured below), all of which are heritage listed and incorporated in the proposed redevelopment. 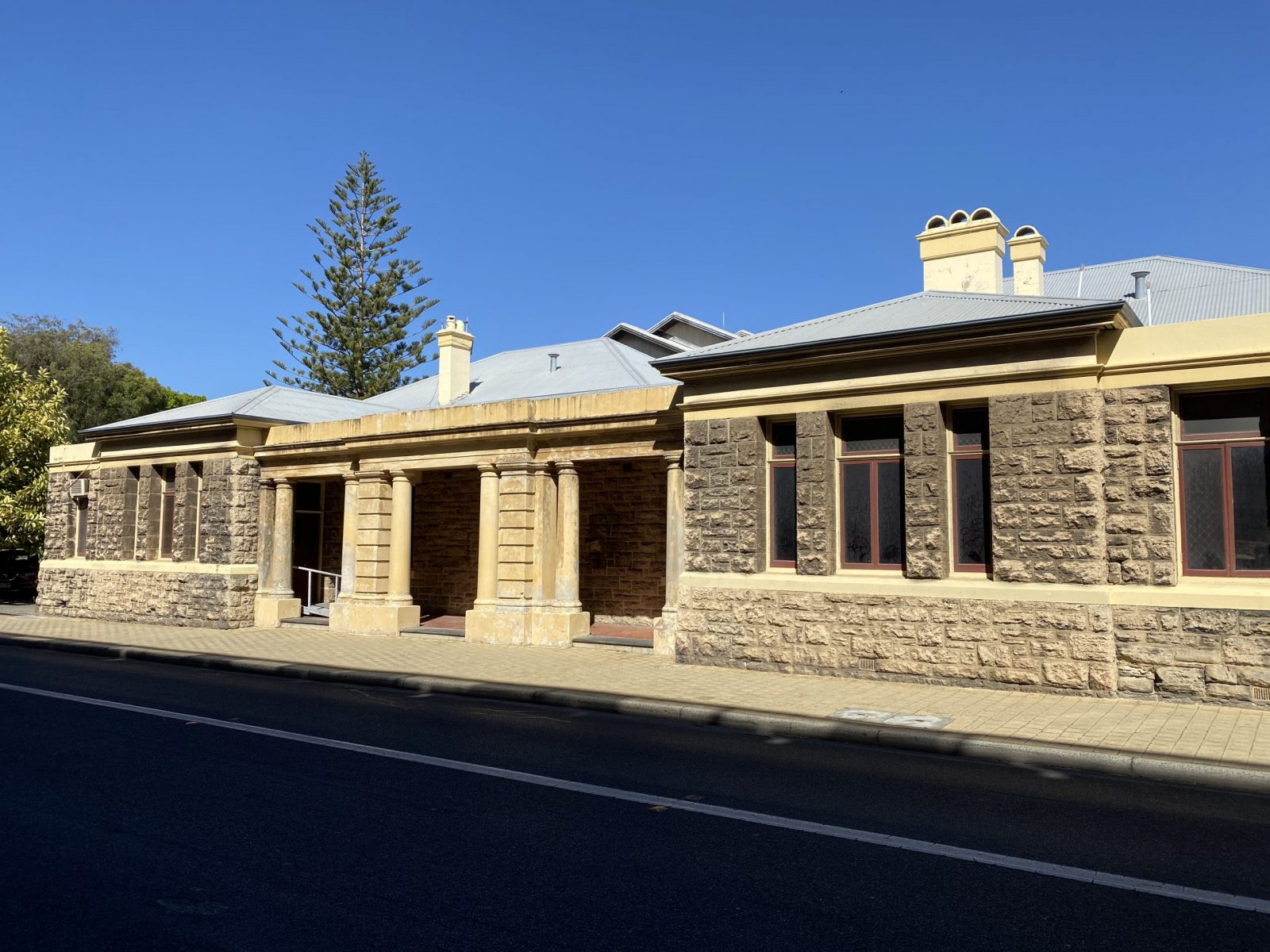 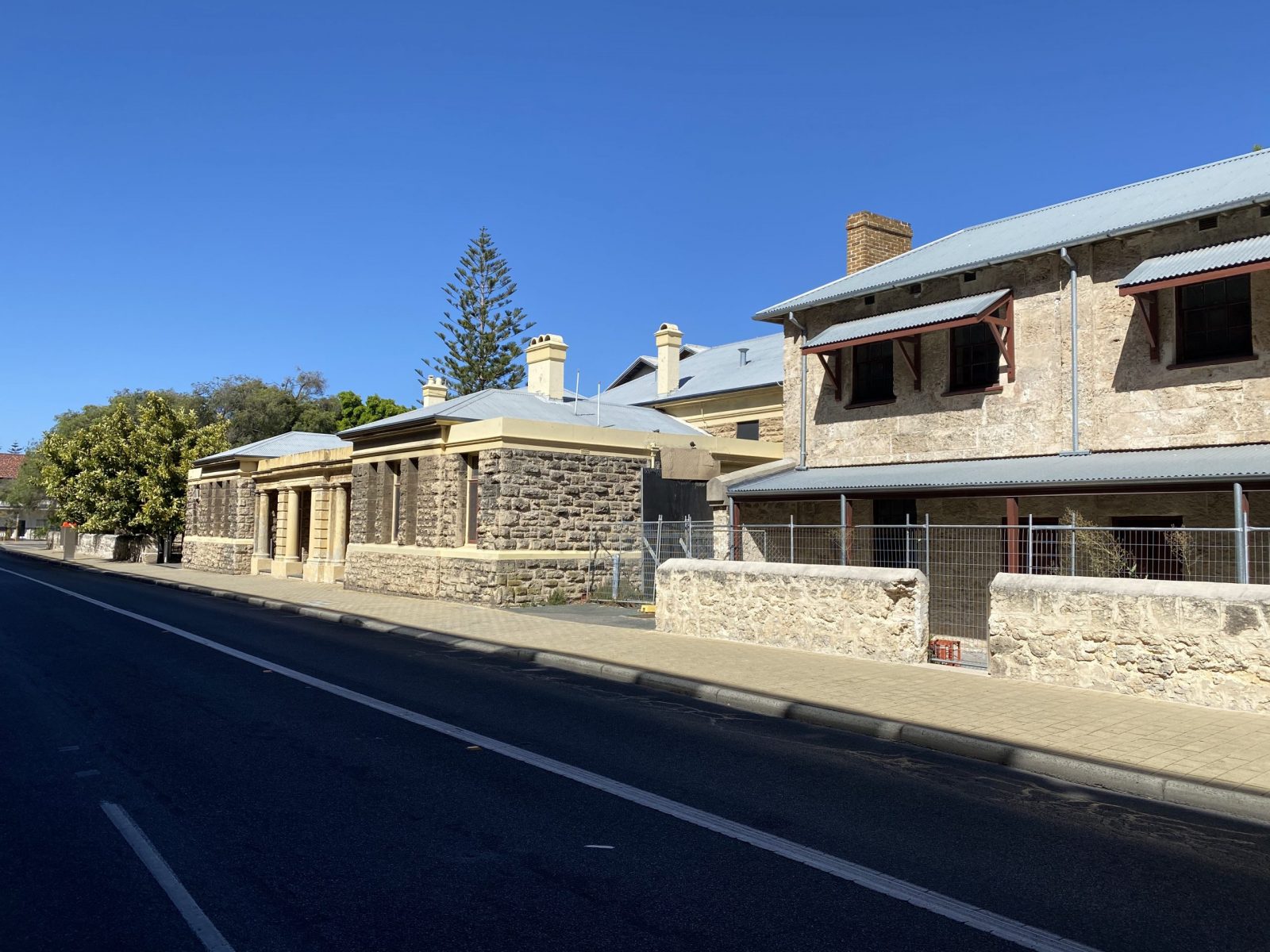 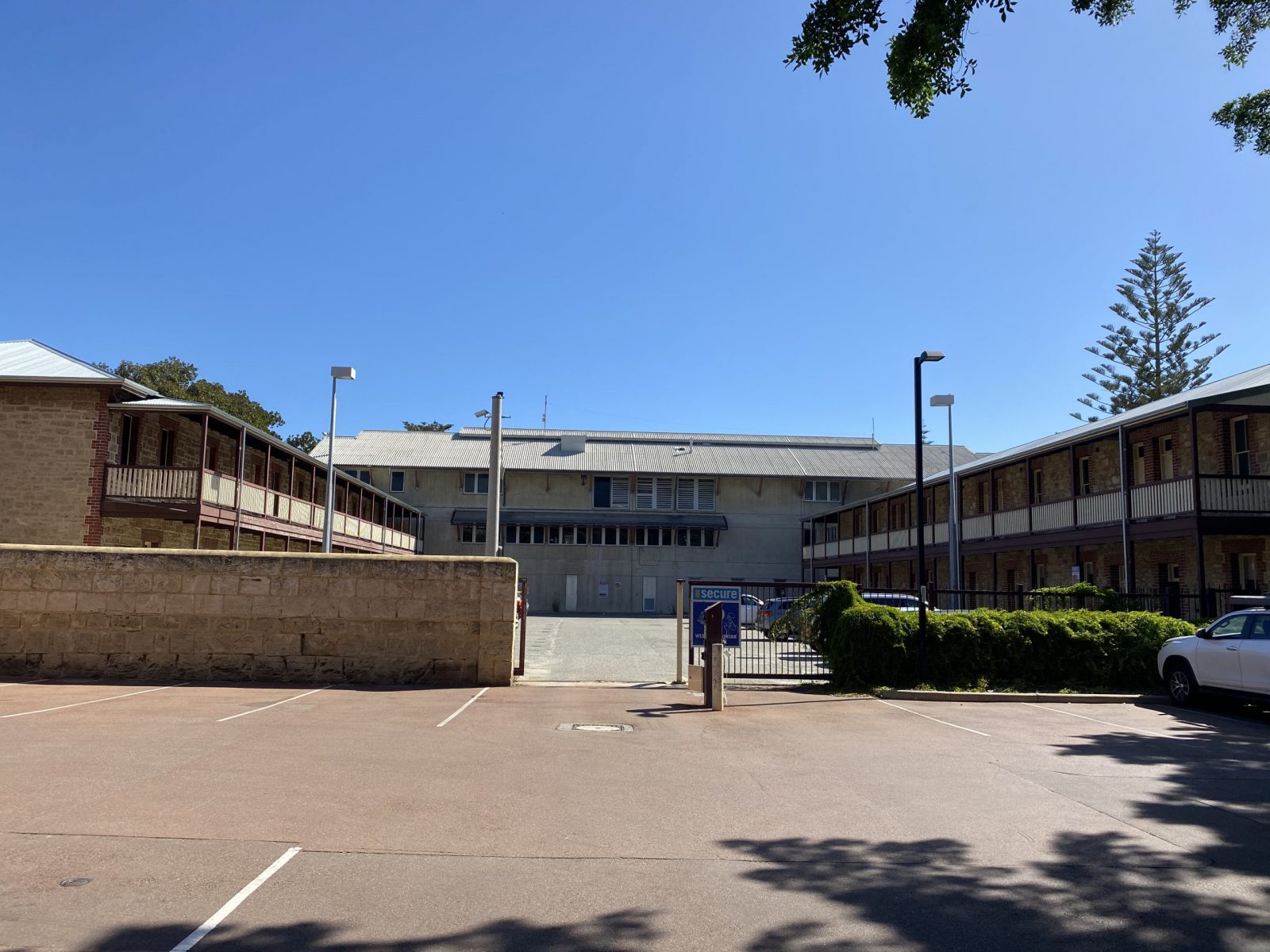 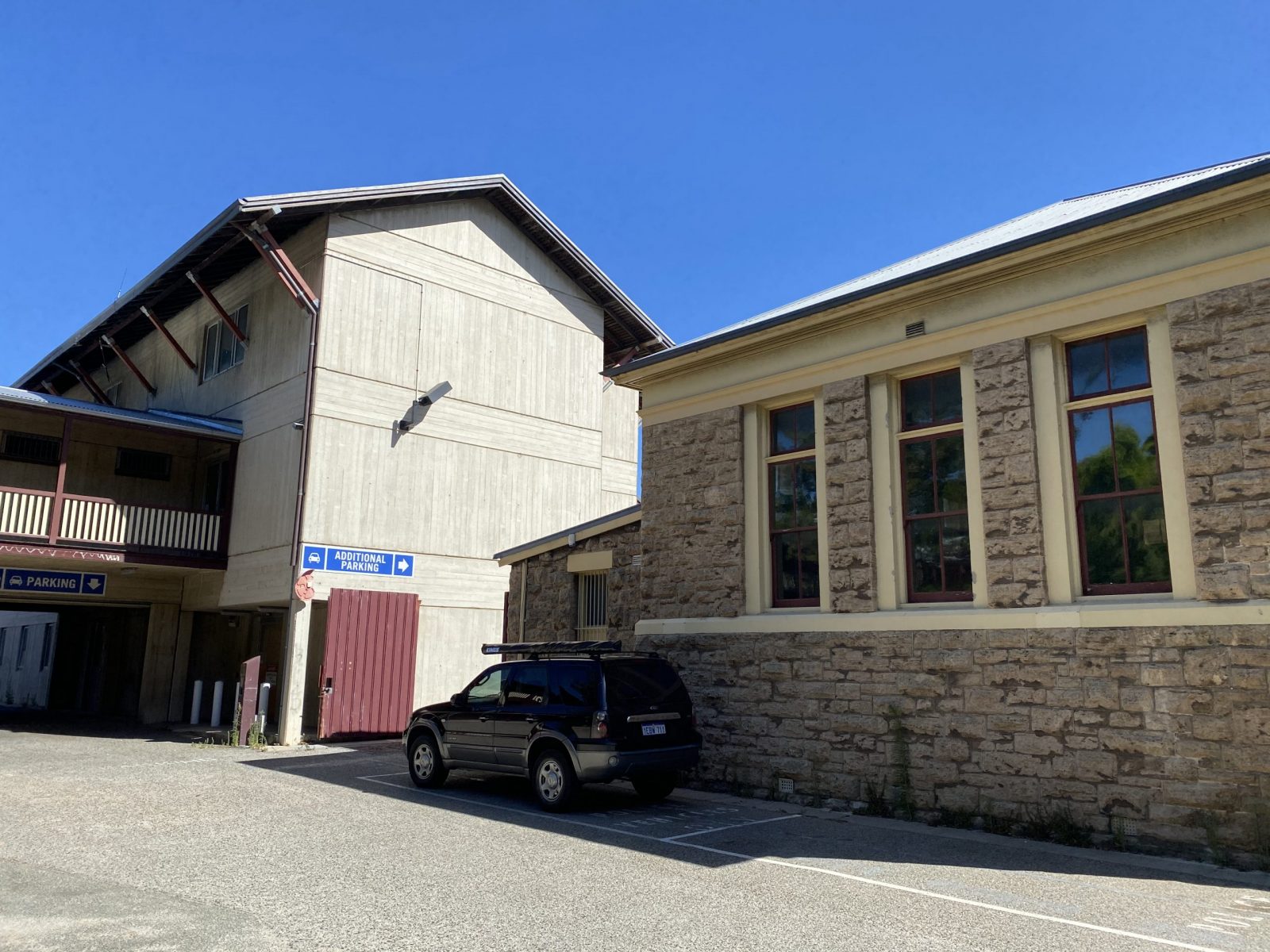 The Henderson Street courthouse served the people of Fremantle for about 100 years. There were, in the latter part of that period, two magistrates. For most of its working life, there were two courtrooms. Court number 1, with its entrance on the left in the first photo in the gallery above, was the main ‘arrest court’. It was the court that dealt with the bulk of criminal and related matters. Court number 2, with its entrance in the middle of the Henderson Street frontage, was the venue for civil matters, such as Local Court trials and marine inquiries.

The building and its staff had many functions. All manner of payments could be made there, including having documents stamped for stamp duty, various licence fees, rent to the State Housing Commission and traffic fines, to name a few.

It survived an attempt to burn it down in the middle of the night. I am reliably informed that it occurred on 4 July 1993, and that, if the arsonists had used petrol rather than diesel, they may well have succeeded. Needless to say, the strong suspicion was that the culprit or culprits bore a grudge against the justice system for some perceived injustice. Enquiries included combing through the lists of those who had recently been dealt with by the magistrates. No-one was ever charged with the crime.

The building was also the centrepiece of a political demonstration. In 1975, the Liberal-National Country Party government, led by Premier Sir Charles Court, amended the Police Act 1892. By that amendment, section 54B prohibited meetings of more than three people in a public place to discuss matters of public interest unless authorised by a permit from the Commissioner of Police issued at least seven days before the meeting. Not surprisingly, it engendered public meetings without the benefit of a permit as a way of protesting against it. There were a number of prosecutions.

Throughout Western Australia protesters gathered in public places in defiance of the section. There were, at the time a number of very important issues which were the legitimate subject of public concern. For example, there was the Noonkanbah dispute, pitting oil drilling on indigenous traditional lands against the traditional owners wishes. More broadly the section was seen as a challenge to fundamental liberties and aimed at, in particular, trade unions.

In places as far afield as Port Hedland and Roebourne unionists were arrested and brought before magistrates. Invariably they were fined relatively small amounts which they often refused to pay as a matter of principal and protest.

One noisy demonstration occurred outside the Henderson Court building. Almost certainly, it was the case that yet more arrests had been made for breaches of section 54B and that those arrested were appearing that day before a magistrate. Court staff from the time recall that Henderson Street was crowded with protesters with placards and banners. There was no possibility of any vehicle movement on Henderson Street. That would have annoyed the constabulary of the time because the police station then was to the rear of the court building, with a drive-way off Henderson Street. 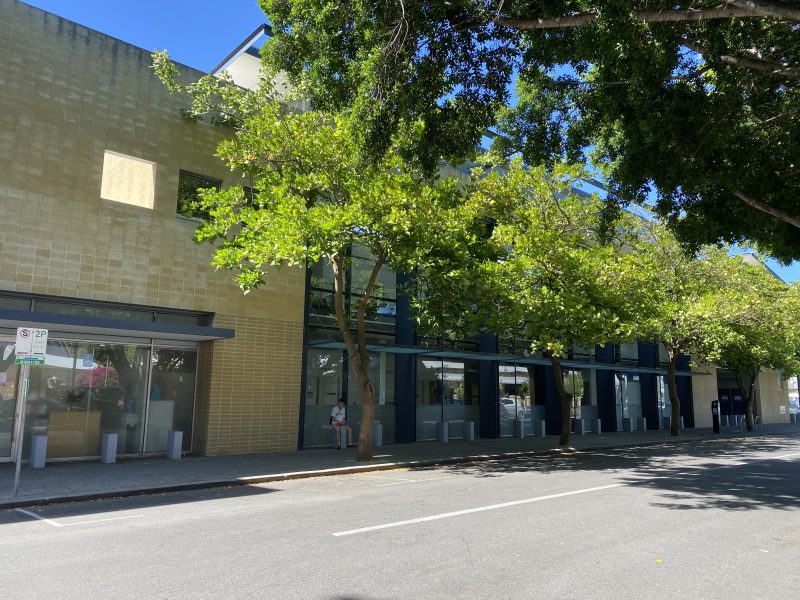 The fifth and current court building in Fremantle (pictured above) is a modern structure at 8 Holdsworth Street, just around the corner from its Henderson Street predecessor. It is, principally, a magistrates court although it does have facilities to accommodate a jury trial and occasionally a District Court jury trial has been conducted there. 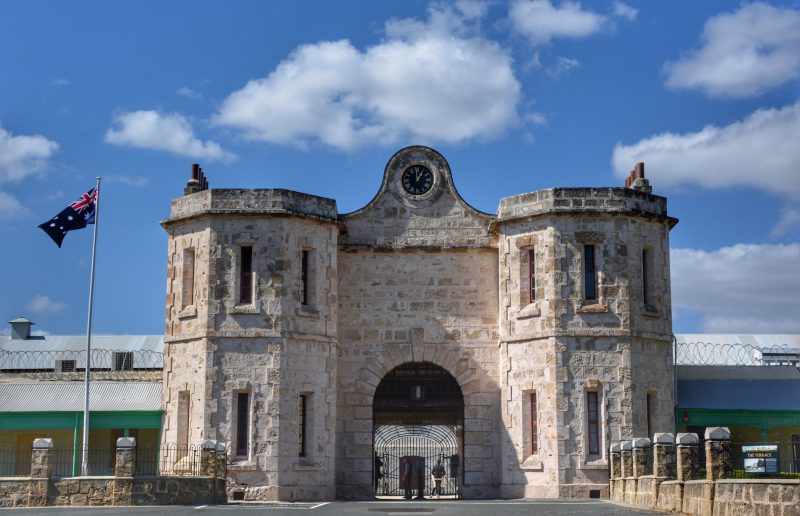 Of all of the buildings in Fremantle that have played a role in the justice system, the two longest serving are the Henderson Street courthouse and the convict-built Fremantle Prison, which is pictured above. The latter, which was opened in 1855, ceased its historic function in 1991 and the former a few years later. Fremantle Prison was the principal penitentiary of the colony and then the State and included, among its many facilities, gallows. There were many executions there over the years but those who met their death there, did so, unlike young John Gavin, in comparatively private (and probably more efficient) circumstances.

The Henderson Street courthouse never had the same prominence. It is the case, however, that in the early decades of the twentieth century, the Fremantle police district extended as far as Dwellingup. In the days before air travel became a significant player in the movement of people and produce, the port of Fremantle was a bustling, busy place. The Courthouse and Police Station in Henderson Street would have been, similarly, busy places.

* This article was written by Philip Eaton