Gnomesville is only an hour and a half from Perth and is a special place for the little folk. It is deep in the Ferguson Valley and hidden amongst stunning natural bush land.

The exact location is Lazy Hollow, at the roundabout of Wellington Mill and Ferguson Roads. As far as the eye can see is a community of over 6,000 gnomes, and this number is continually growing.

It’s a magical little forest with pathways and a wooden bridge over a bubbling brook. You walk 10 metres one way, thinking you have seen them all, and then you’ll find some more hiding behind a log or peeping through the maiden hair ferns. The forest is dark in places and draped in ivy. Dappled light filters through the trees and it’s quiet but for birdsong.

Gnomes stand in groups, live in the trees, in the bush and beside the stream and pathways. There is every type of character you could find in your own town. Groups of gnomes do different things—playing cricket, driving cars, flying planes and spaceships and sailing boats. There are ninjas, drunks, sports teams and even a detention centre. 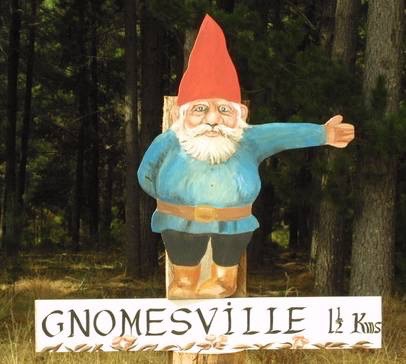 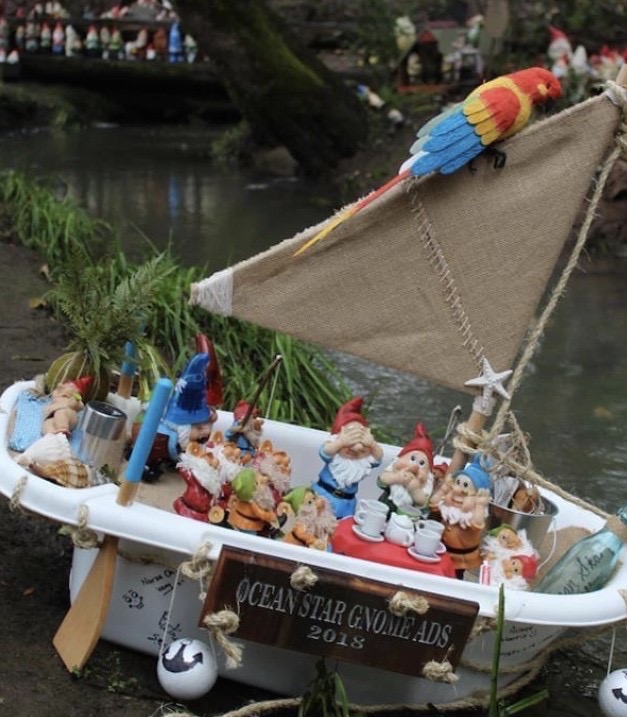 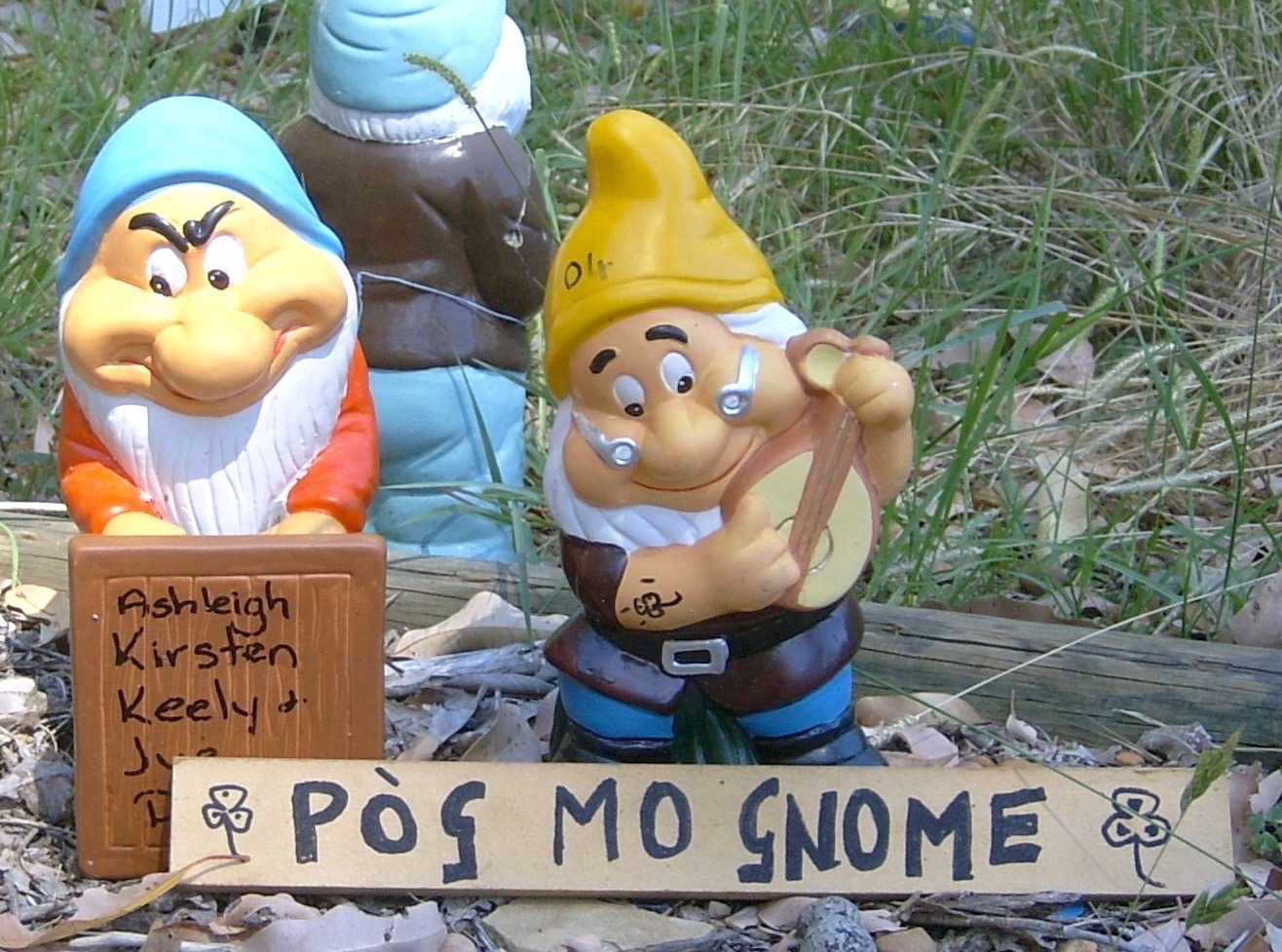 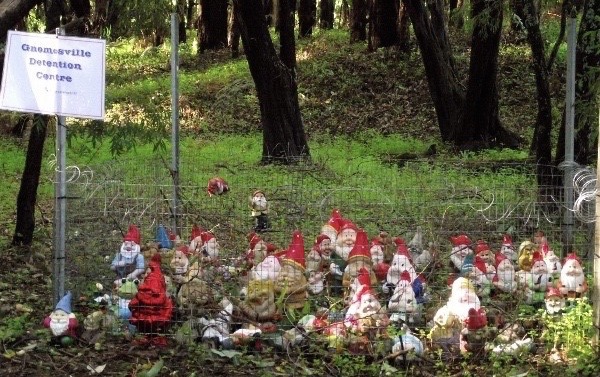 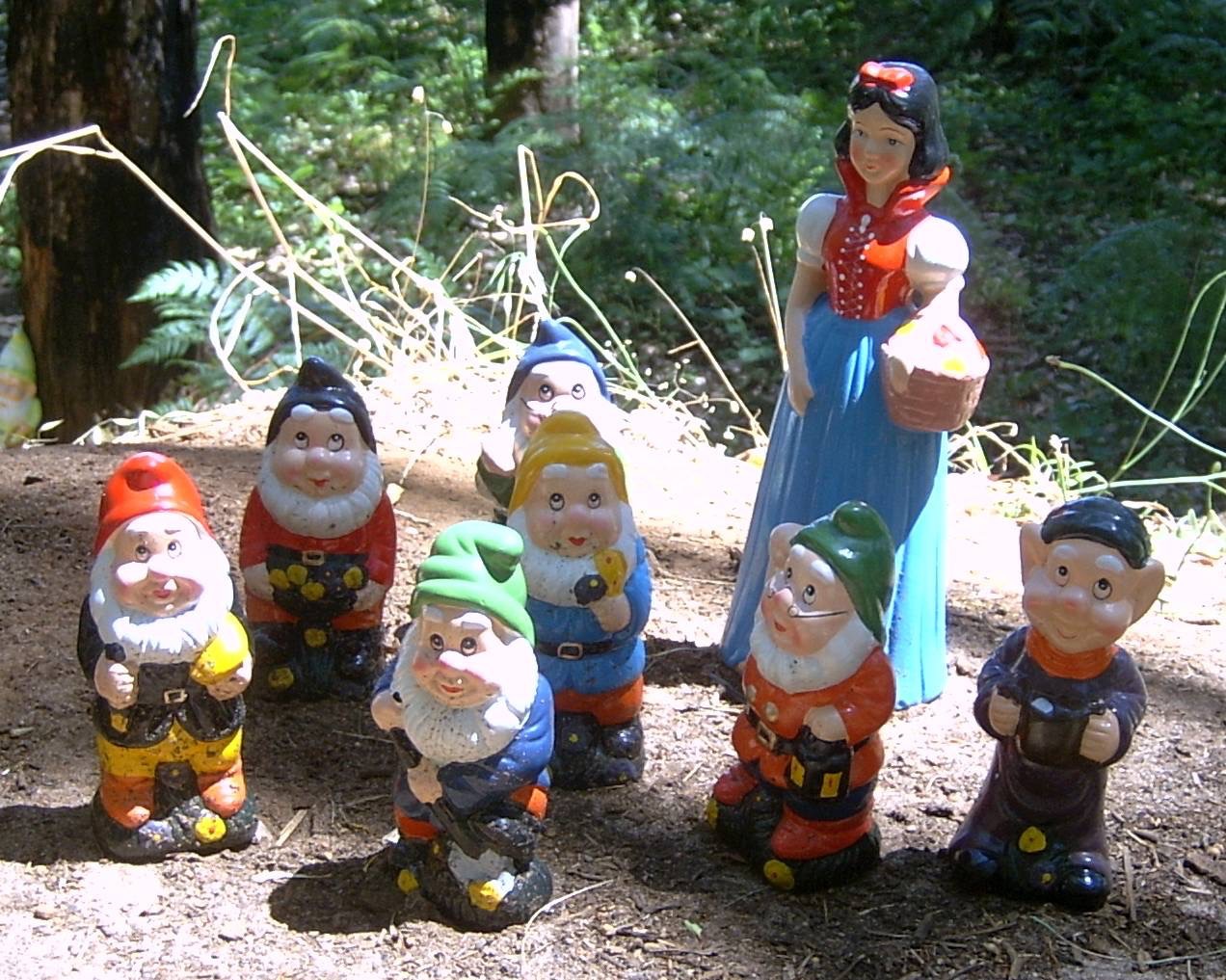 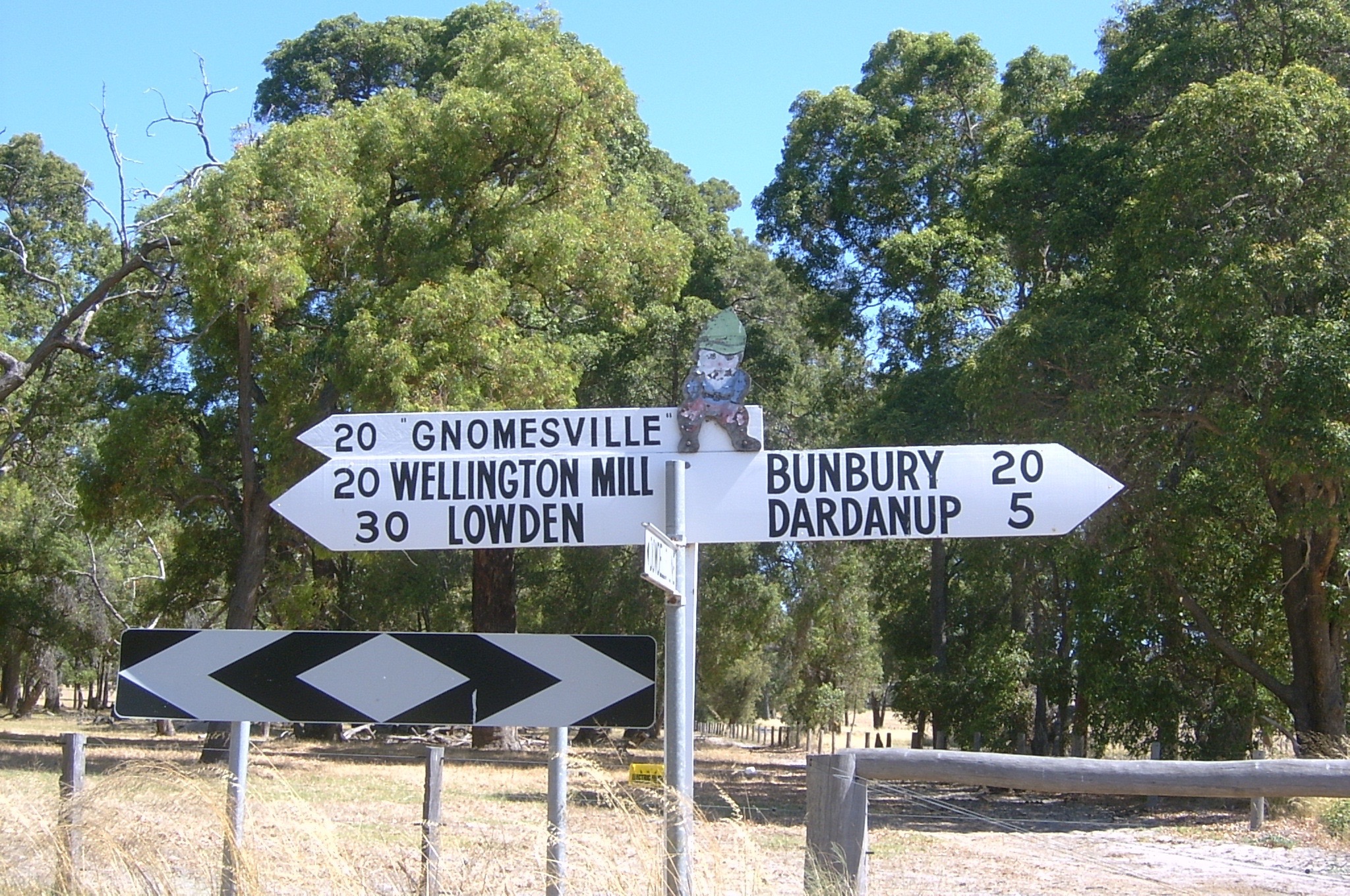 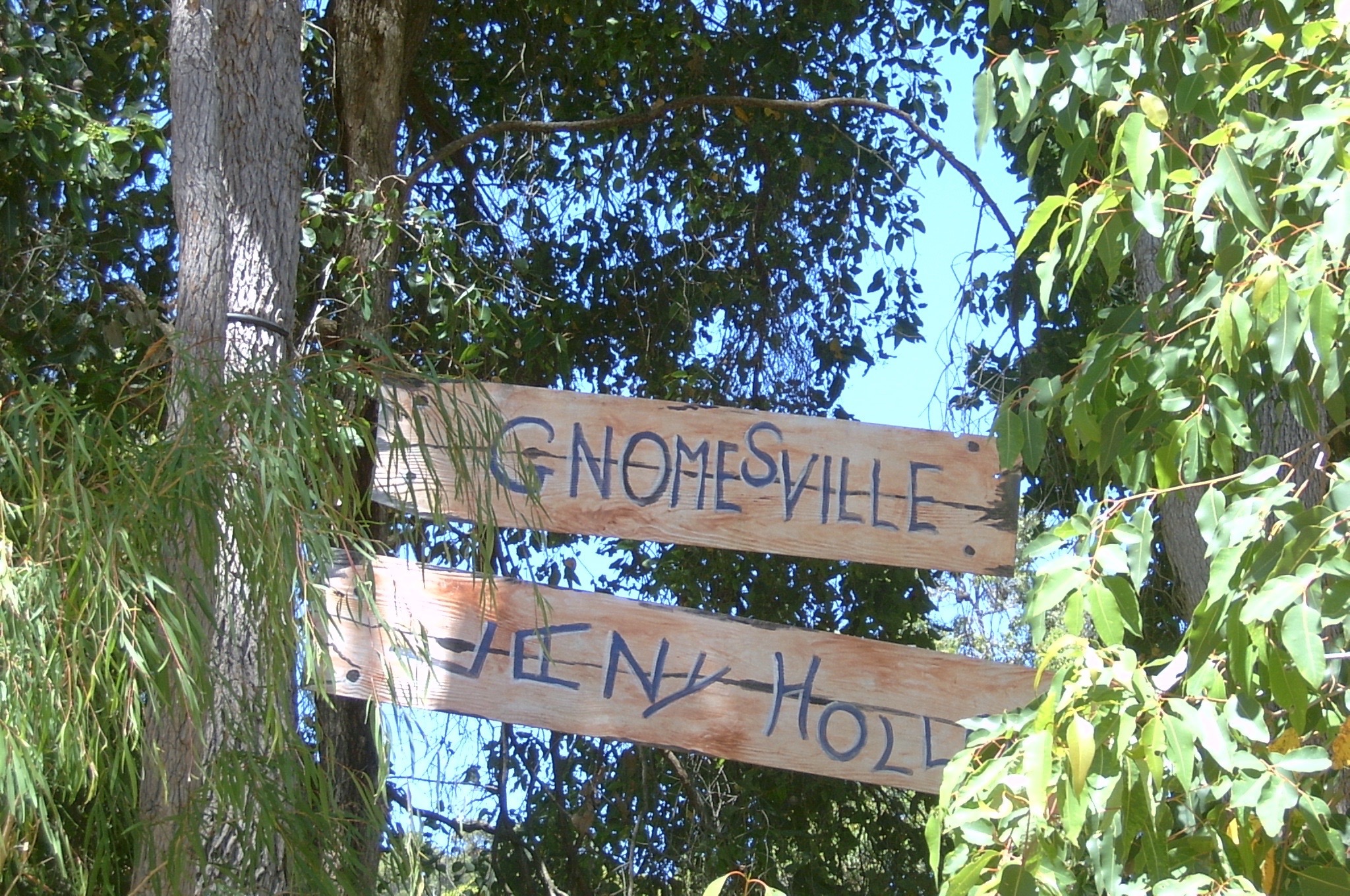 Some are rude, others hilarious and witty. I love Póg mo Gnome (Póg mo thóin means ‘Kiss my ass’ in Gaelic). Visit the Gnome for Wayward Youths; they show their bottoms. Or the Gnome Birth Centre, and the Funeral Gnome.

There are literary gnomes: Gnomeo, Gnomeo, wherefore art thou Gnome? Meet the cast from Gnome and Away, the movie star Saving Gnomo, or see the Gnoman Empire.

It goes on and on. There are gnome songs—Gnoming in the gloaming and Give me a gnome among the gum trees.

Gnomes are fairytale creatures like little old men and have captured the imagination of adults and children alike for centuries. They are known as dwarfish spirits of a subterranean race who guard the treasures of the earth. Many gardeners believe that gnomes bring good luck

So how and why did the gnomes start appearing at Wellington Mills? Once upon a time in 1996, a new roundabout was being constructed, amid much public discussion and cost. An unknown resident planted a gnome at the intersection to oversee the building. Under the cover of darkness more gnomes appeared.

They then moved to Lazy Hollow beside the roundabout and have happily existed there ever since. Gnomesville has evolved in time completely by itself. More and more gnomes were added and often accompanied by a handcrafted sign featuring Gnomeish puns.

People from all over the world visit and plant gnomes. Gnomesville attracts busloads of visitors’ everyday; it’s now a popular tourist attraction.

So if you are heading south over the school holidays, break the journey and have a picnic at whimsical Gnomesville. Or check it out if you are staying close by.

Visiting Gnomesville will have you laughing out loud, even if you dislike gnomes.

Ferguson valley is where gnomes like to end their travels. You can plant a gnome and make a wish, which the little folk will grant. But beware, bad luck follows those who steal from the gnomes or hurt them in any way!