Joanna’s Candlelit Soirées At Kidogo – A Night With Kavisha Mazzella

Joanna Robertson has run Kidogo at the old kerosene store building on Bathers Beach Fremantle for 21 years. When the COVID crisis began, the restrictions on gathering, on galleries, bars and performances hit her business like the proverbial freight train.  Four months of weddings, exhibitions, performances and other events were cancelled in an instant, with a storm of distress, disruption, chaos and uncertainty following close behind.

Joanna isn’t the type to lose her wits. The imperative in the first weeks was to focus on rebooking all the postponed events, working intensively with all the many people whose plans were now upside down, followed by a period of time being still, to take in the peace, the absence of seagulls, the abandoned beach, to go snorkelling in the clear water.

After a few weeks, she knew it was time to do something, but what? Kidogo has been a business that has evolved through many iterations over a couple of decades, generally with art, performance and celebration at its core. Joanna explained all in the Shipping News’ recent podcast Interview with Joanna Robertson. 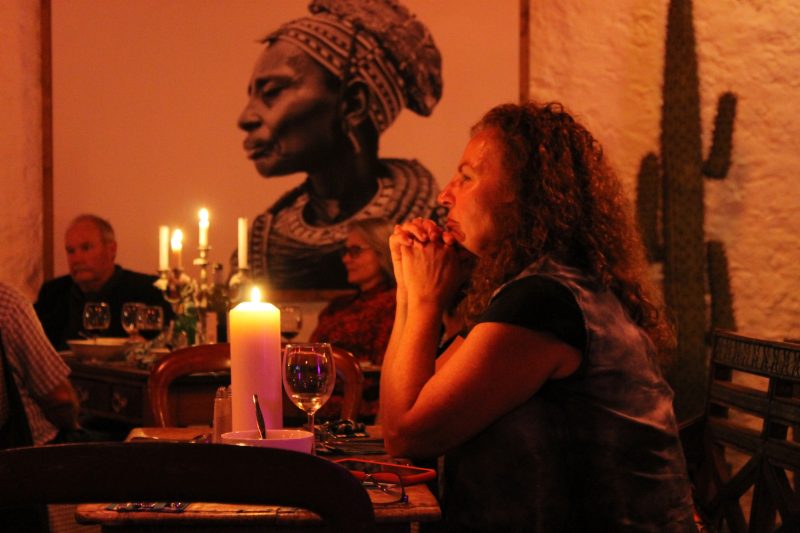 In late May came the news that restaurants could open with limited numbers. Kidogo was not, and had never been, a restaurant. But with bars banned, along with galleries and performances, Joanna knew that she could only open if she served food. The customers had to be seated, so they didn’t mingle. One problem among many – Kidogo had no kitchen, just a long, narrow multi-purpose back room behind the galleries that serves as storeroom, bar, and just about anything else.

In a couple of whirlwind days, she had the Health Department advising on the requirements. They left Kidogo at 4.30 pm and half an hour later she was in the electrical store buying kitchen gear. By sundown, next day, after calling friends and associates to secure the loan of a great variety of tables, chairs, couches, and some extraordinary large-scale photographs by South African photographer David Bellam, she had the makings of a pop-up restaurant, focussed around the stage.

‘I would never have done this if not for COVID,’ she told me.

The Kidogo arthouse, is an amazing and evocative building at any time. Currently the interior is transformed. Exquisitely and warmly lit with a combination of lamps, candles and a clever installed lighting system, the mood can be tuned. Enormous photographic prints frame the walls. There are about a dozen oddly matched tables laid, and the stage is there as always, flanked on one side by the old piano.

Tonight, we are present for dinner and a musical ‘soiree’ with Kavisha Mazzella. 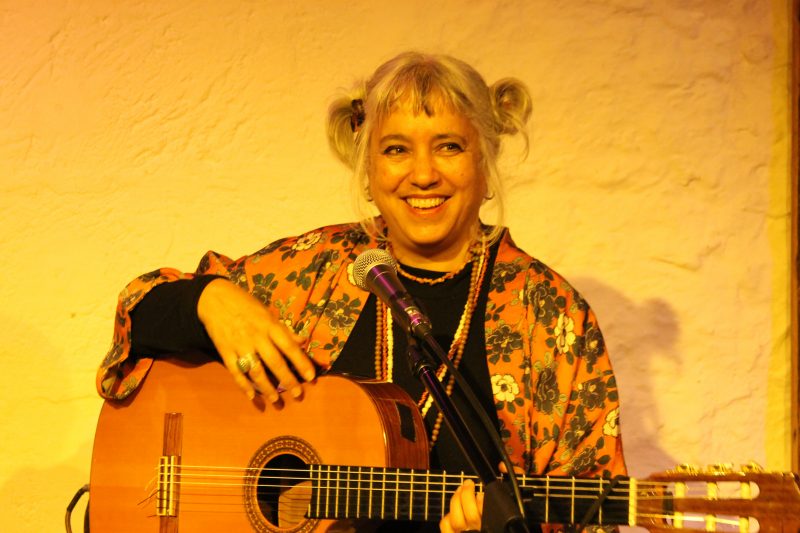 There is the sound of the sea, rain on the roof. A freight train rumbles by.

Dinner is three courses and it comes in bowls. Spicy pumpkin soup, a slow cooked chicken dish with capers, dates, chickpeas or a vegetarian goulash, and a stewed apple/cream/vanilla. It is all really good. There was plenty on the plates and I wolfed the lot and would have scoffed Claire’s desert as well if she’d let me.

Kavisha is a legendary folk/world music songwriter and performer, whose diverse work across thirty-plus years is too extensive to cover here. Her early career flourished in Fremantle, before she moved east, returning this year to be with her father in WA. She radiates energy.

After mains, it is time for music. 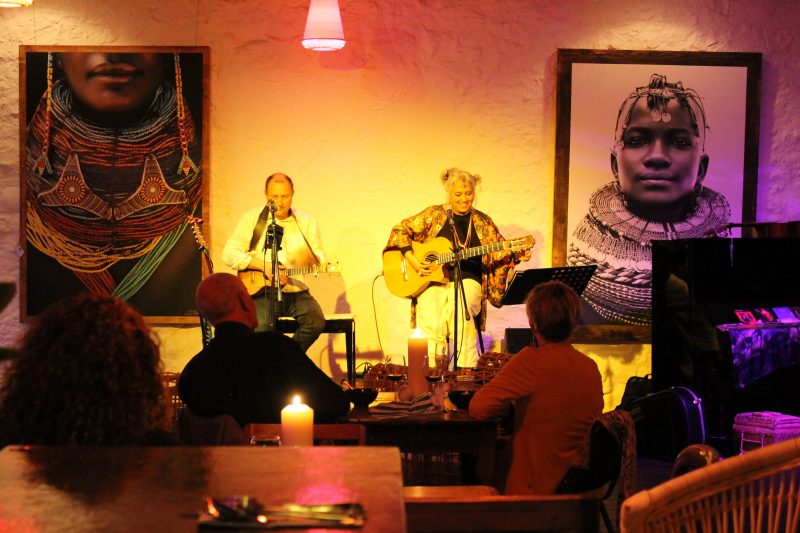 Kavisha takes the stage with John Reed, with whom she first played in 1981 and with whom she has performed many times, notably in the band ‘Rich and Famous’ in the late 1980s-early 90s. John plays cittern, a bouzouki type instrument, as well as ukulele. He also provides some back up harmony and irreverent humour. Kavisha has her nylon string guitar and her amazing voice. There is an easy rapport and fine musical understanding between two first-class musicians.

From the first song, the haunting ‘Invisible/Indivisible’, Kavisha has, not just a voice but an approach to the performance that is all conviction, as if she is out to join heaven and earth. Some moments have the immediacy of a nearby lighting strike.  She tells a story about folk music legend Liam Clancy telling her to banish the internal critic and “see the song inside”, then moves into ‘The Fearless Note’ a song about authenticity in life and song. There are more songs about people and places by the sea from Fremantle and around the world. One song about street life and generosity in St Kilda sounds like it would have been a great duet with L Cohen, another servant of the song. Folk music at its best. 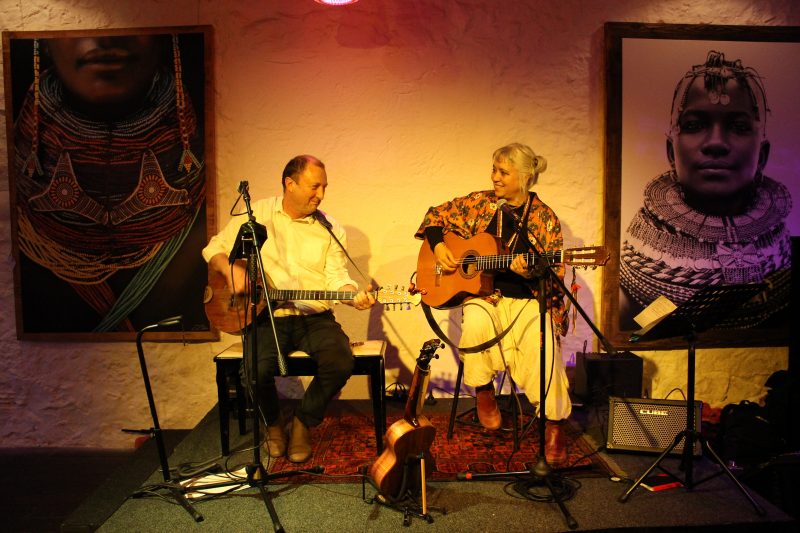 Joanna has put a lot of herself into creating these unique events.

‘People like to hear a story… we just make it up every night,’ she said.

‘Most people it’s their first night out for months, all dressed up.. like a date. I know that everyone will remember the night they came here. I like the hospitality part of it’.

The setting, the songs and the nature of the performance lends itself to listening rather than chat, although you are encouraged to join in the sing-along choruses that weave through Kavisha’s songs. The performance itself is one longish set, so across the couple of hours for the whole dinner and show, there is plenty of time to talk and catch up.

Soirees will continue with Kavisha on Thursdays through June, but there are other soirees as well – Bryan Dalton on Fridays, opera features on Tuesdays, and a pretty full calendar of great offerings as the pace picks up.  There are two sittings – 5.30pm and 7.30pm. Check out the Kidogo website.

If you want to feed your soul, or your senses at least – the Soirées are a great way to do it!