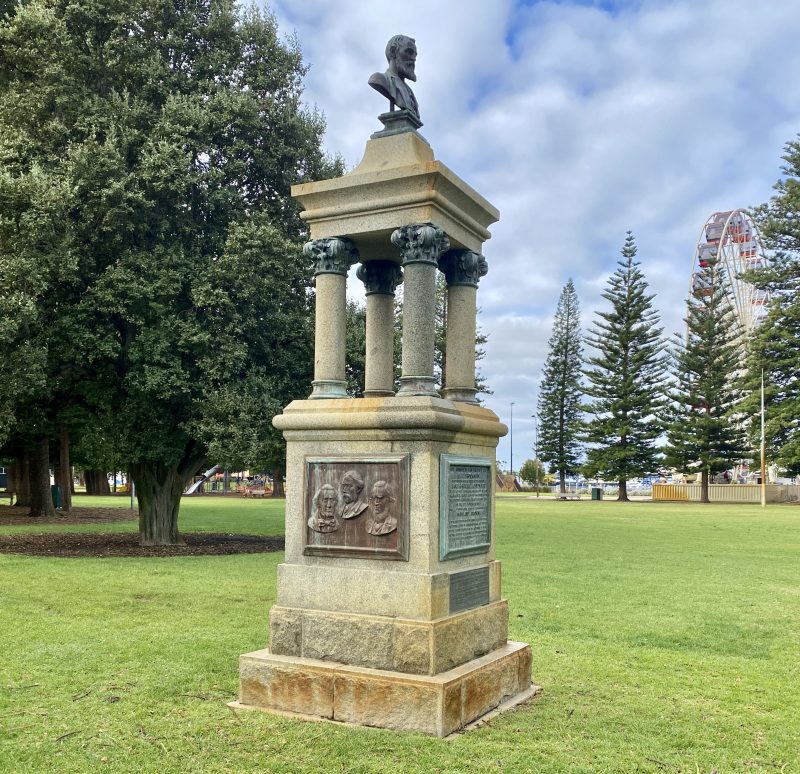 Many of us will have walked past this monument in Esplanade Park, Fremantle. Even stopped and studied it. And read the inscriptions. But what is the background to it all?

It is a memorial to three 1860’s explorers – Frederick Panter, William Goldwyer and James Harding. They are portrayed in a metal plaque on the side of the monument. Here They are. 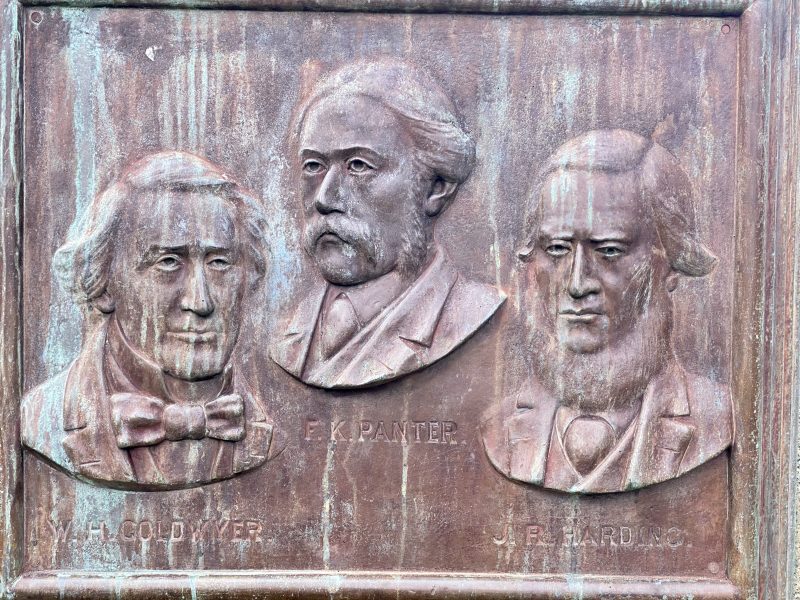 The inscription on a plaque on the monument explains why it was erected.

This monument was erected by
G.J. BROCKMAN
As a fellow bush wanderer’s tribute to the memories of
PANTER, HARDING AND GOLDWYER
Earliest explorers after Grey and Gregory of this
Terra Incognita, attacked at night by treacherous natives
were murdered at Boola Boola near Le Grange Bay
on the 13th November 1864

Also as an appreciative token of remembrance of
MAITLAND BROWN
one of the pioneer pastoralists and premier politicians
of this State, intrepid leader of the government search
and punitive party, his remains together with the sad
relics of the ill fated three recovered at great risk and danger
from the lone wilds repose under a public monument in the
East Perth Cemetery
“LEST WE FORGET”

A relief on another side of the memorial depicts the scene of the discovery of the bodies of the explorers.

Maitland Brown’s expedition forced two Aborigines to lead them to the explorers’ camp. The body of one explorer is depicted in the centre of the scene; the other two are in the tent to the right.

The discovery of the bodies of the three explorers is described in the journal of Maitland Brown** in 1865.

Journal of an Expedition in search of Messrs. Panter, Harding and Goldwyer:
‘4. Started at sunrise towards Boolu-boolu (Ingedarna) with the two natives -A and B – reluctantly taking the lead, each attached to Dutchmanchum’ s belt by a light chain. After reaching the large open plain they kept up for some minutes an eager agitated conversation with each other in low tones, seemed quite undecided what to do, and changed their course several times. But finally all talking ceased and they kept a direct course for the north end of the lake until within a quarter of a mile of it, when they gradually swerved to the left keeping a deathlike silence with their eyes fixed on the ground. There was hardly a word spoken among ourselves – all saw that the fate of our poor friends would soon be learned, and everyone looked anxiously around in all directions. After going a little further on Dougale cried out “Here they are”, his quick eye had caught a glit of a prismatic compass hanging from a branch of a small cajeputi tree to our right, in a level clear grass plot bordering the grove which encircles Lake Ingedarna; it was a mute but a sure sign, and as Dougale cried out he reined in his horse and pointed to it, as if dreading to approach; it told the tale and he knew it.

‘With what dreadful anxiety we rode up to that tree; our feelings upon reaching it are beyond expression; there, at its foot, lay the dead bodies of our friends where they had been murdered while sleeping months before. Those of Panter and Harding on the one side lying head to head, covered as far as the knees with a tent cloth which had been drawn over them after death; the legs of both from the knees downwards, and the left arm of Panter protruded beyond the covering, almost perfect but slightly shrunk. The body of Goldwyer was lying on its face with the head towards and at right angles with Panter’ s feet, dressed in a riding costume, perfectly recognisable but decayed to a skeleton. Of the guns and revolvers, two of the latter only were found; one, Harding’s was lying near him with every barrel loaded and the hammer down on the catch; the other, Goldwyer’s was lying ten yards away with four barrels discharged and two loaded.’

The search for the explorers led by Maitland Brown was described as “punitive” and the natives as “treacherous”. The following extract from the journal of David Francisco, a member of the recovery party, refers to the day after the discovery of the remains of Harding, Panter and Goldwyer, and the following day:

‘Wednesday 5th: After breakfast returned to Boola Boola to pack up and remove the remains whilst we were all thus engaged the two native prisoners bolted and native Tom started in pursuit. As they entered the thicket Tom fired his revolver at them and as they continued to run, he fired a second shot and they both fell.

‘It was then found that both were mortally wounded, one dying almost immediately and the second about ten minutes, afterwards acknowledging his guilt with his last breath. Dined off a Kangaroo shot by Dugal, Tom also shot a large bird, very much resembling a Flamingo. About sundown started for our camp at Cape Harding distant about 10 miles and arrived at 8 p.m. went on the hill at 11 p.m. and signalled the vessel.

‘Thursday 6th: Took all the remains on board. Dan Brown returned on board and Mr Burges and Williams came on shore. Sent all the pack saddles off except one and bought a riding saddle ashore. I volunteered to accompany the party back to the Depot and we all started about midday. After proceeding about 2 miles we observed 2 natives ahead of us upon a clear plain and we started off in pursuit. Mr Brown stopped one -and I stopped the second (a boy), they both commenced talking and pointed over a small rise in the plain a few yards off. Mr B. galloped across calling out, and we galloped over the hill and into the midst of a native camp – the two having been placed upon the plain as decoys. There was no time to think – action was the order and at it we went – they fought well but we had dispersed the whole tribe (about 50) in about 15 minutes, the only accident being a nasty Dowack wound in the forehead of Williams’ mare. Five or six were left dead upon the field and about 12 or 13 wounded. We could not pursue them as they took refuge in a mangrove thicket. Found 2 pieces of stirrup iron and a compass at one of their fires.’

Alternative stories of why the explorers Panter, Goldwyer and Harding were killed have since been collected. This evidence suggests that there were a number of altercations between the Aboriginal people of the area and the explorers before they were killed. These disputes may have resulted from access to water and traditional land.

Two of the explorers were members of the Roebuck Bay Pastoral and Agricultural Association which sought to secure land in the area for cattle stations.

By the 1980s, attitudes towards Aboriginal people and understandings of their culture were beginning to change, and the distress caused by a monument which seemed to celebrate the deaths of as many as 20 Aboriginal people, was recognised. The monument was refurbished and in 1994, after 6 years of negotiations by a group of historians from Murdoch University in collaboration with the La Grange Bidyadanga Aboriginal Community, a further plaque was dedicated. La Grange Bidyadanga is south of Broome.

This plaque was erected by people who found the monument before you offensive.

The monument describes the events at La Grange from one perspective only: the viewpoint of white ‘settlers’.

No mention is made of the right of Aboriginal people to defend their land or of the history of provocation which led to the explorers’ deaths.

The ‘punitive party’ mentioned here ended in the deaths of around twenty Aboriginal people. The whites were well armed and equipped and none of their party was killed or wounded.

LEST WE FORGET MAPA JARRIYA-NYALAKU

*This article was written by Jude Robison and was first published in the Newsletter of the Fremantle History Society, of which the author is a member. The Society welcomes new members.

** The monument was erected in The Esplanade in 1913 by Brown’s friend George Julius Brockman; the portrait bust of Maitland Brown on top being by the Italian sculptor, Pietro Porcelli. The memorial was unveiled by Sir John Forrest.