Tomorrow, Tuesday 25 February 2020, we welcome back Radiance of the Seas, belonging to the Royal Caribbean cruise line, big enough but not as big as the Queen Mary 2 who we farewelled recently. Impressive just the same.

Here’s our snap of her arriving in Fremantle Port in March 2018. 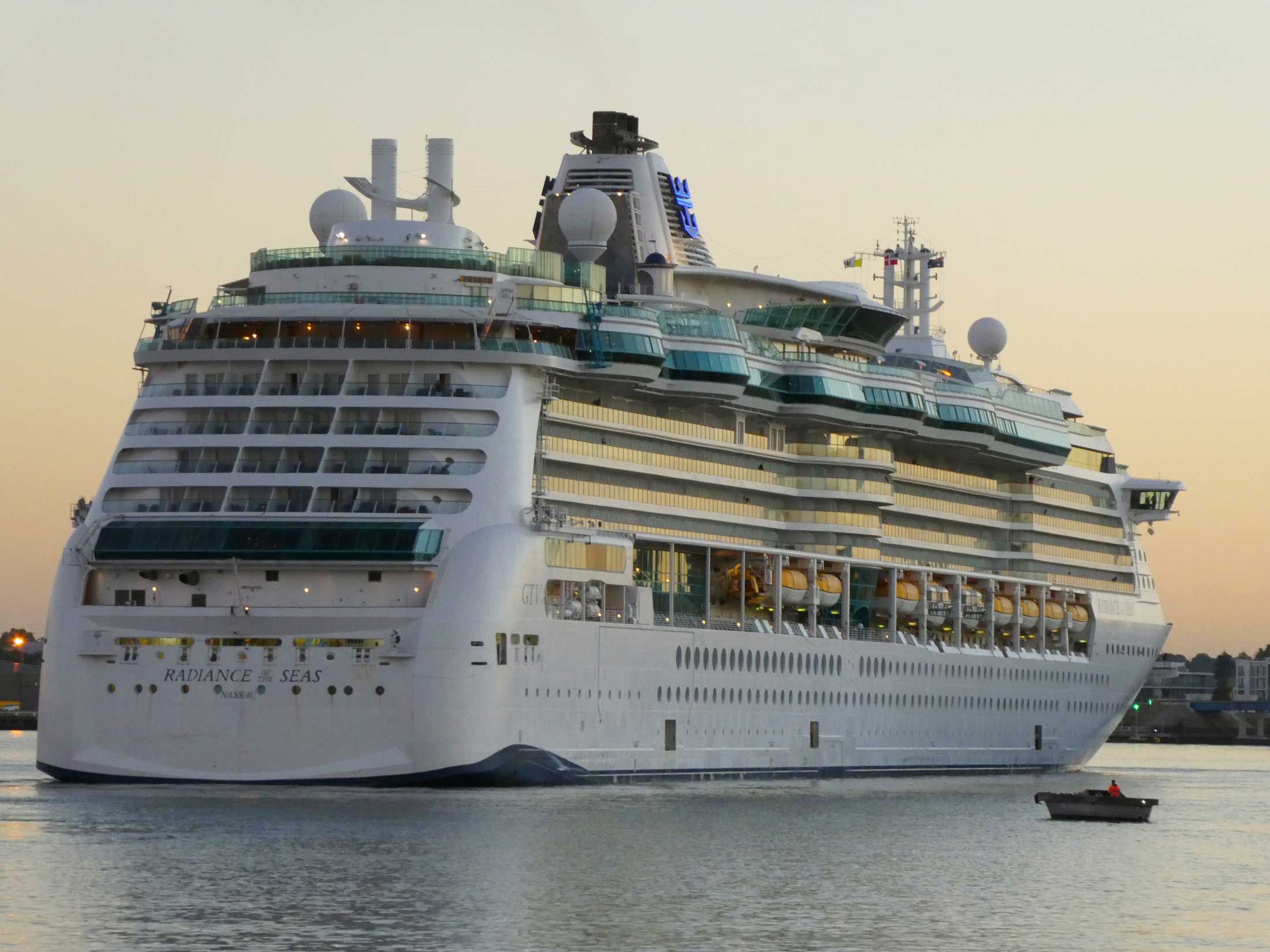 Radiance of the Seas is the first gas-turbine vessel in the Royal Caribbean fleet and boasts higher and more efficient speeds with much lower emissions.

Featuring 12 decks, Radiance of the Seas is also home to a spectacular 10-storey glass Centrum and sea-facing glass elevators for stunning views no matter where you are in the ship.

The Radiance class ships are now among the biggest going around, but as explained below, not as big as the Oasis class.

All ships under Royal Caribbean have names ending with the phrase “of the Seas”, a theme that began in 1987 with Sovereign of the Seas, which was delivered that same year.

These are the various classes of cruise ships sailed (motored?) by Royal Caribbean. They just get bigger and bigger. Are there any limits?

The Empress class is a single-ship class consisting solely of Empress of the Seas.

At approximately 73,000 Gross tonnes, these were described as the first “mega-ships” in the industry (with the exception of the SS Norway, an ocean liner converted into a cruise ship) built at the Chantiers de l’Atlantique shipyard in Saint-Nazaire, France. The first one, Sovereign of the Seas, was launched in 1988. The Sovereign-class ships were the first cruise ships to have an open atrium area. Like larger Royal Caribbean ships, the Sovereign-class ships have pools, open bars and lounges inside, and grand theaters.

The Vision class consists of three pairs of sister ships. Legend and Splendour, built at Chantiers de l’Atlantique, Saint-Nazaire, France have a gross tonnage of approximately 70,000. Grandeur and Enchantment were built at Kvaerner Masa-Yards, Helsinki, Finland and had an original tonnage of approximately 73,000. The final pair, Rhapsody and Vision were also built at Chantiers de l’Atlantique, and have a tonnage of 78,000. In 2005, a 74-foot (23 m) midsection was added to Enchantment of the Seas, bringing its tonnage to over 80,000. All ships of this class feature over 2 acres (8,100 m2) of glass. Royal Caribbean sold both Splendour of the Seas and Legend of the Seas to Marella Cruises. Splendour of the Seas last sailed for Royal Caribbean on April 4, 2016, and the final Legend of the Seas sailing for Royal Caribbean left port on March 13, 2017. In October 2019, Royal Caribbean announced that the Grandeur of the Seas would be leaving the fleet after its last scheduled sailing on March 21, 2021 transferring to Pullmantur Cruises.

The sixth largest passenger ships at sea (Royal Caribbean’s Oasis, Quantum and Freedom classes, Norwegian Cruise Line’s Norwegian Epic and Cunard’s Queen Mary 2), the Voyager-class ships were the largest class of cruise ships in the world when constructed and were the first ships to have an ice rink at sea and the first to have Royal Caribbean’s “Royal Promenade” mall concept, a main thoroughfare extending most of the length of the ship, flanked by bars, cafes, and shopping venues.

They were built at Kvaerner Masa-Yards’ (now Meyer Turku) facility in Turku, Finland. They have a gross tonnage of around 137,000 tonnes. Activity options on all five ships board include a basketball court, at least three pools, a mini-golf course, a rock wall, an ice skating rink and, originally, an inline skating track. Navigator of the Seas replaced the inline skating track with a Flowrider surf simulator in 2014, and similar changes are planned for Voyager and Explorer.

Navigator of the Seas and Mariner of the Seas are second-generation Voyager-class vessels, and feature glass stateroom balconies that extend out from the superstructure of the ship and a larger Windjammer buffet area.

All Radiance-class ships have a gross tonnage of 90,090 and environmentally friendlier gas turbine engines. The Radiance-class ships have over 3 acres (12,000 m2) of glass, glass exterior viewing elevators, over 700 balcony staterooms, two-level glass windowed dining rooms, alternative restaurants, a retractable glass roof over a pool, an outdoor pool, as well as the first self-leveling billiard tables at sea. The Radiance class ships were constructed at Meyer Werft, Papenburg, Germany. Unlike the preceding Voyager class, these ships are built to the Panamax form factor, allowing them to pass through the Panama Canal.

The Freedom-class ships are lengthened versions of the second-generation Voyager-class ship, and contain a 400-foot (120 m) Royal Promenade mall running much of the length of the ship, an ice skating rink, basketball court, several pools, a mini-golf course, and a rock wall. New features on the Freedom class include the FlowRider surfing simulator, the H2O Zone kids water play area, a boxing ring, and hot tubs cantilevered over the side of the ship. At 154,407 gross tons, the Freedom-class ships were the largest ships in the world from 2006, until the debut of the Oasis class in 2009.

The Oasis-class ships are the largest cruise ships ever built, having surpassed Freedom-class ships. They can accommodate up to 5,400 passengers at double occupancy and they have a maximum capacity of 6,296 passengers. Furthermore, the ships have a gross tonnage of at least 225,282 tons, and cost the line around US$1.4 billion each. The first two ships in the class, Oasis of the Seas and Allure of the Seas, were delivered in 2009 and 2010 by STX Europe Turku Shipyard, Finland. The third and fourth ships in the class, Harmony of the Seas and Symphony of the Seas were built at Chantiers de l’Atlantique in Saint-Nazaire, France. Royal Caribbean International, in conjunction with USA Today, sponsored a contest to name the first two vessels.

On February 18, 2019 Royal Caribbean announced the order of a 6th Oasis class vessel from Chantiers de l’Atlantique for delivery in 2023 with a double occupancy of 5,714 and gross tonnage of 231,000.

Perhaps in conjunction with Fremantle Shipping News, Royal Caribbean might like to sponsor a contest to name this mammoth, not far off twice the size of the QM2!