Shipping, Us, And The Planet

How does Shipping, including Cruise Shipping impact us and the planet? In particular, where does Shipping stand, or should one say, float, on Climate Change?

Shipping is said currently to account for 2-3% of global greenhouse gas emissions, although a 2014 United Nations study warned increasing trade could increase the sector’s carbon footprint by as much as 250% by mid-century.

If shipping were an actual country it would be up there with the world’s biggest emitters.

It’s good to see, however, that Shipping takes very seriously the climate challenge it faces.

At the World Economic Forum in Davos last week, the International Maritime Organisation (IMO) Secretary-General Kitack Lim called for renewed cooperation from all stakeholders to tackle the urgent issues of air pollution and greenhouse gas emissions from shipping.

“When temperature records are routinely broken, icecaps are melting and some parts of the world are flooding while others are burning, there can be little doubt that addressing climate change must be humankind’s major priority,” he said.

IMO’s strategy is to reduce sector-wide emissions by at least 50% by 2050. To deliver this, significant numbers of zero-carbon ships, or ships that can be easily adapted to use low or zero carbon fuels later in their life, will have to enter the fleet as early as the 2030s, Mr Lim said.

Stressing the vital role of IMO’s as the shipping industry’s global regulator, he said, “Ambitious regulatory targets will act as the catalyst for technology, triggering research, development and innovation,” adding “now is the time to start developing the vessels, the fuels, the delivery mechanisms and all the other necessary infrastructure to support zero-emission shipping.”

Turning specifically to the need for a collective approach throughout the entire global supply chain, he said, “Collaboration in this area is likely to include developing and testing low or zero-carbon fuels; better communication and planning over berth availability to help with speed-optimization and just-in-time arrival; and supplying cleaner on-shore power for ships in port.”

The IMO Marine Environment Protection Committee (MEPC) has previously announced that member state delegates have agreed on a target to cut the shipping sector’s overall CO2 output by 50 percent by 2050, to begin emissions reductions as soon as possible, and to pursue efforts to phase out carbon emissions entirely. The agreement includes a reference to bringing shipping in line with the Paris Climate Agreement’s temperature goal, which seeks to limit global warming to “well below” two degrees Celcius.

The 50 percent CO2 reduction goal is roughly in line with the proposal endorsed by the International Chamber of Shipping. In addition to the percentage target, the initial strategy also includes strengthening the EEDI efficiency requirements for new ships and reducing shipping’s carbon intensity – that is, the amount of CO2 emitted for each unit of transport work completed.

While it creates goals for future action, the MEPC’s “initial strategy” does not give a timetable for rolling out legal restrictions on CO2 output. Rather, it is a “framework for member states” that sets out “levels of ambition to reduce GHG emissions and guiding principles,” the IMO said in a statement.

The IMO says that the agreement will be revised by 2023, in accordance with a “roadmap” passed in 2016. The “roadmap” calls for a fourth and fifth round of IMO greenhouse gas studies from 2019-2022, which would be carried out before creating any regulations.

The “initial strategy” was not easily to reach. MEPC had previously deferred a decision on a reduction plan for carbon emissions. A group of nine states had called for MEPC to take no action on CO2.

But progress seems to be happening officially, even if reluctantly and slowly.

It has been estimated that 25.3 million passengers worldwide would travel on cruise ships in 2017, up from just 15.8 million a decade ago, according to most recent data from the Cruise Lines International Association. 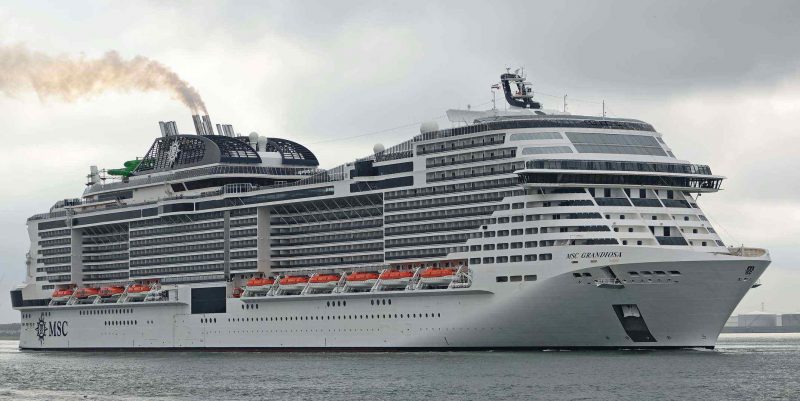 Here is what Griffith researchers concluded –

They were particularly concerned with the emission of ultra-fine particles in the air around the vessel that could affect the health of passengers and the climate more generally. They reported that just one ship can emit the same amount of particulate matter in one day as one million motor vehicles.

The reporters also found that the air on the upper deck of the ship downwind from the boat’s funnels, had 84,000 ultra-fine particulates per cubic centimetre. Right next to the funnels the number was 226,000.

The program compared those statistics with the air quality in London’s Piccadilly Circus, using the same recording devices, where it found that the numbers were just 38,400 per cubic centimetre.

P&O responded to the program’s findings by highlighting that it had reduced its fuel consumption by 28% since 2005 and that the company slashed CO2 emissions by 20% in 2014 alone.

The company also said its ships would be fitted with “exhaust gas cleaning systems” in an effort to reduce emissions further.

Other cruise lines are also responding to the climate challenge.

MSC – Mediterranean Shipping Company – for example, recently announced their cruise line will soon operate in a carbon neutral way through an off-set scheme.

The company did not say exactly how much C02 its ships produce, nor how much it would cost to offset the emissions, but said that it would become the first carbon-neutral cruise line, starting in January 2020.

“MSC Cruises will offset all direct carbon dioxide emissions from its fleet marine operations through a blend of carbon offset projects developed according to the highest standards by leading international entities that take immediate action on greenhouse gas emissions,” MSC executive chairman Pierfrancesco Vago said in a statement.

“All costs for the offsets as well as any other associated items will be covered directly and in full by the company,” he said.

MSC announced its emissions offset plans in Hamburg at the christening ceremony for its latest ship, the MSC Grandiosa (pictured).

We will continue watching this space with interest.