Hey, let’s make sure all of our elders in Freo know about these programs.

In Australia, use of the internet is almost universal. At last count, 86% of the population was digitally connected.

Despite the continuing stereotype that many older people are not technologically savvy, or that they can’t learn new things, in 2015 79% of people aged 65 and over had used the internet compared to 6% in 2001.

Increasingly, government services such as myGov and myagedcare rely on individuals having access to computers and the internet, and the knowledge of how to use them. Older adults who do not have these skills may therefore miss out on the services and support they require.

Online resources are not likely to help those who are not already online. But small, social, community run programs that allow seniors to share learning and do it on their own terms have proved effective.

Older Australians are falling behind younger people in their capacity to access and make use of the internet.

The Australian Digital Inclusion Index (ADII) measures which social groups benefit the most from digital connection, and which ones are being left behind. The score is based on measures of access, affordability and digital ability. It shows how these dimensions change over time, according to people’s social and economic circumstances, as well as across geographic locations.

In 2017, Australia’s overall score improved from the previous year. But the age gap has grown steadily, indicating older people are falling behind younger people in their capacity to access and make use of the internet. 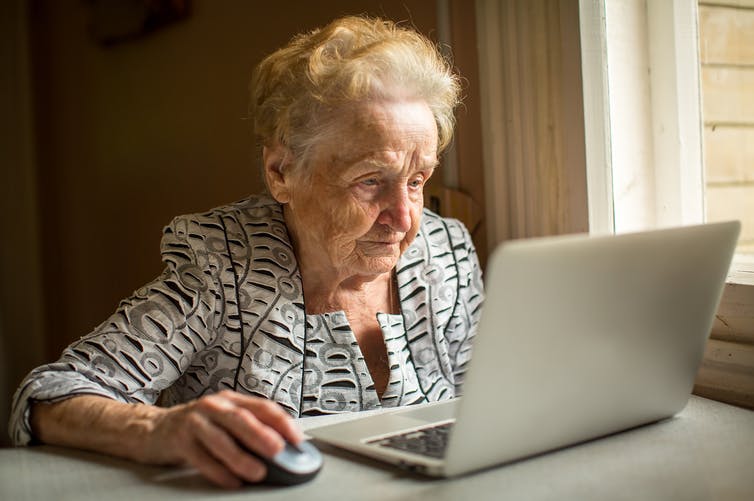 There are many factors restricting older people from accessing the internet.

People aged 65 and over are among the least digitally included groups in Australia, particularly if they are women, on lower incomes or not living in a major city.

Someone in their 60s is more likely to be familiar with and use the internet than someone in their 70s, 80s or older. This is due to the likelihood that younger cohorts would have used such technology in their working lives.

Of course, there are many other variables which can greatly affect an older adult’s chance of being capable of accessing and using the web. These include gender, education, employment status/type, social and economic background, language skills and current health and/or disability.

Where older Australians live can also be a determining factor, as many regional, rural or remote locations don’t have the digital infrastructure to ensure access to the internet equal to that of metropolitan centres.

Interest in and ability to use digital technologies plays a role in limiting or promoting access and use. For those older Australians who are not yet online but who want to be, there are now a number of community and online programs available that can help them become tech savvy.

One of these programs is Telstra’s Tech Savvy Seniors program. The online program contains a number of self-paced and self-directed learning modules and includes step by step videos and instruction guides (in 11 languages as well as English) which provide older adults with the basic skills to use computers, the internet and smart phones.

Other providers include the federal government’s Be Connected Program which aims to ensure “every” Australian is online. It also provides online learning modules. So does the GoDigi Program, delivered through a partnership between Australia Post and Infoxchange and the Australian Seniors Computer Clubs Association, an organisation which provides access to a large number of computer clubs around Australia to support older Australians in using computer technology.

The online components of all these programs make the assumption interested older adults already have basic access to the internet or at least someone to help them with their initial set-up and going online.

For those older adults who don’t have this kind of support and who learn best with personal instruction, a number of face-to-face training programs are provided across all these organisations. In many cases these programs are held at local libraries, which play an important role as sites for hosting learning events, particularly in rural and regional contexts.

There are also various social enterprises emerging with the aim to support older people for a fee, such as the Lively organisation. These programs can be great for those who would prefer help in-home. But they’re also problematic in addressing the digital divide for older people on low incomes, which is one of the biggest barriers to online access. There is a real need to develop programs that are free for older people in order to address the affordability divide.

Further Reading:
Australia’s digital divide is not going away

Recently, home and community care organisations have recognised the benefits technology can provide to their clients. One provider implemented its own technology program to help promote connection and alleviate social isolation for its home, community and residential care recipients. The program includes an intergenerational initiative which teams care residents with local high school students who teach them how to use technology. The social aspects of the program for both students and residents were shown to be as beneficial as the knowledge gained.

Another provider, Umbrella Multicultural Community Care, set up an “internet café”, in which older migrants attend the local community centre once or twice a week to learn how to better access the internet. Attendees used this opportunity to do online shopping, reconnect with family, places and friends from overseas, as well as to join online poetry groups or listen to music from their homeland. 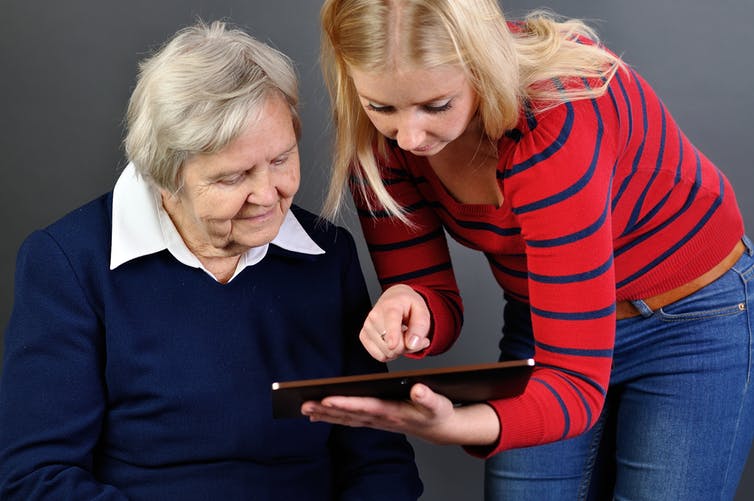 Community programs are helping older migrants connect to the internet.

Programs aimed at enhancing the digital literacy of elderly migrants are more likely to be successful if delivered in socially supportive settings. The Internet Cafe provides an important opportunity to build and retain social networks across distance.

Another recent example of this successful method of learning can be seen in the iPad Seniors Group in WA. It was started by a community volunteer who won an iPad and didn’t know how to use it. She set up a self-help group to teach herself and others, which has now been running for six years.

What these programs have in common is a willingness to support older adults to learn how to use the internet in a social environment at their own pace on their own terms, from each other. Expanding funding and awareness for these sorts of programs has the best chance of bridging the digital divide.