The Voyage of The Hougoumont – Entry 6

This article is the sixth in the series.  If you haven’t done so already, please read Entry 1, Entry 2, Entry 3, Entry 4 and Entry 5.

On board were 62 Irish Fenian political prisoners as part of a total of 280 convicts. The 150 year anniversary of this event will be commemorated from 5 – 14 January 2018 at the Fenians Fremantle and Freedom Festival.

The Exhibition of Transportation at the Fremantle Prison from 9 January 2018, will feature the original manuscript ‘The Wild Goose’ written on board the Hougoumont.

(Thanks to the Mitchell Library, State Library of NSW and a generous WA benefactor)

After the Cape of Good Hope – Towards Fremantle

After rounding the Cape, there were a few days of relative calm with the ship averaging between 50 – 100 miles per day. From 13 December until Christmas they were obviously into the area of the trade winds. The ships speed picked up to a daily average of 200 miles.

The consequences of this are referred to in Casey’s diary:

Awoke this morning by a fearful crash on board. I learned that, owing to pressure of the wind on studding sail, the yard snapped in two and stud sail was swept away. During the night the ship was driving along at a furious rate under full canvas.

4.30: Awoke to a great confusion on deck and the boatswain calling all hands up. The second mate ordered the topsails to be taken in. Scarcely had the order been issued, but the ship was pitched violently on her beam ends by several furious strokes of a wave. Another minute and the gale roared through the rigging. The ship pitched and lurched violently.

6 o’clock: On deck. The gale has now reached its height. The scene that meets the eye is dreary in the extreme. Waves are rolling and following each other, that are mountains high.

The mainsail is ordered to be taken in. All hands mount the foreyard with caps under their arms and hair hanging loosely to the wind. With some difficulty, they succeeded in securing it.

Below, plates and pints are topsy turvy. Tins are lying about in all directions. It is amusing to see orderlies carrying down breakfasts. The violent motion of the ship makes it no easy matter to retain position at table. As for placing a pint of chocolate there, its entirely out of the question. Almost every five minutes the vessel is struck by a wave which shakes it from stem to stern and sends everything flying about.

As I now write, I am sitting at the table, my legs entwined in the lashings underneath. I can, with difficulty, keep my position and fear that my manuscript will be illegible.

The Hougoumont reached her furthest point south on Wednesday, 18 December 1867.

During the night the lookout gave the dreaded cry ‘Iceberg ahead’, but fortunately it was a false alarm. They were certainly far enough south for such a sighting. The daytime temperature reached only 41degrees F (5 degrees C) as they sailed before a keen and bitter blast from the North West.

Flocks of Cape pigeons and several albatross were flying about the ship. Casey remembered the awful cold of many bitter days spent in Portland prison, with hands benumbed and feet almost frozen, and he pitied the poor men left behind there.

Denis Cashman was extremely busy with drawing the heading for the newspaper, weaving wreaths of holly and ivy together with his usual shamrocks, for the Christmas number of The Wild Goose. He also spent the evenings with the choir, practicing their ‘Adeste Fidelis’ (Come all Ye Faithful) for Christmas.

From the Diary of John Sarsfield Casey:

Morning dark wet and cold like a winter’s morning in Ireland. Good breeze speed 8 knots. We had the first death on board. A poor Irishman, another victim of Dr rather Cardinal Cullen’s ‘special dispensations’. It was raining and exceedingly cold. The corpse was moved on deck where a procession formed from the hospital to the forecastle. It was as cold as I ever felt, and I cannot get a glimpse of the sun. The ship is rolling, very much preparing to throw the corpse overboard. The funeral procession formed with Mr Jos Noonan as cross bearer, two acolytes and the priest in robes reciting prayers for the dead. The corpse was borne on the hatchway and covered with the ‘Union Jack’ and proceeded between two rows of passengers, along the lee side of the vessel, to the porthole. The Union Jack was removed, and he was slowly launched overboard. He sank immediately in consequence of the weights attached to his feet.

I cannot but meditate on Death and the uncertainty of life. I cannot think without the emotion of dying in a far distant land far away from friends, home and kindred without a single hand to sooth and comfort me in my last moments. I hope the Almighty will preserve and spare me till I tread once again the hallowed soil of my dear old country.

As the body sank beneath the waters, it called to mind the sublime lines of ‘Monstrous de Naturaleza’ by Lope de Vega*:

“What is life? Tis but madness
What is life? A mere illusion
Fleeting Shadow Fond delusion
Short lived joy that ends in sadness
Whose most steadfast substance seems
But the dream of other dreams.”

*Félix Lope de Vega y Carpio (1562-1635) was a Spanish playwright, poet, novelist and mariner. He was one of the key figures in the Spanish Golden Century of Baroque literature. It is worth remembering that Casey was 19 years old at the time of his arrest and had spent months in solitary confinement in English prisons. He was clearly a well-educated, intelligent and sensitive young man.

December 23, 1867:  Lat 47◦ 58’ South; Lon 67◦ 38’
Morning bright and clear but very cold. The sky is cloudless and of a deep blue colour. Our speed is 7 knots. The sailors are very busy on deck. The carpenter is putting a mast in one of the boats – everything denoting that our long and dreary voyage is now drawing to a termination. God be thanked. Such a miserable voyage as we have had of it. Everyone is rejoiced at the prospect of catching a glimpse very soon of our Land of Promise.

Evening bright, sky clear and not so cold as preceding days. I stood musing beside the capstan on the forecastle for a few minutes, watching shoals of fishes darting through water with the rapidity of lightning. My thoughts carried me back to the green hills of holy Ireland and again straying off in dreary fancies of the gloomy future – my hopes and expectations.

Our men are preparing to celebrate Christmas in the old fashion, as well as circumstances will permit. Each mess has saved flour during this past week and are now baking. What associations does not this simple thing bring on – the memory of Christmas celebrated in bye gone days ‘neath the paternal roof on the hearth where blazed the Christmas block’. Yes, even now: –

Remembrance wakes with all her busy train
Swells at my breast and turns the past to pain.

However, last Christmas I spent within the walls of Portland Prison and dined on ‘Gumbo’. This year though still a prisoner, I shall enjoy myself in company with three score of fellow exiles, many of whom are noble, generous and brave whilst many are xxxxxxxxxxxxxxxxxxxxxxxxxx.

It is more likely to have been censored by a Prison authority, as any possessions taken into Fremantle Prison were confiscated and returned to the prisoners when they departed. This is how the Wild Goose remained in the possession of John Flood.

From the Diary of Denis Cashman

Before I arose this morning the ‘Adesti’ was sung by all hands. Some were dressed, others in their bunks. I immediately dressed, went on deck and had a fresh water wash. We had a terrible storm last night, which has not yet abated, the ship is being tossed about like old boots. We have just breakfasted off a sweet loaf (rather a delicacy to Convicts) and have another for Skilly. 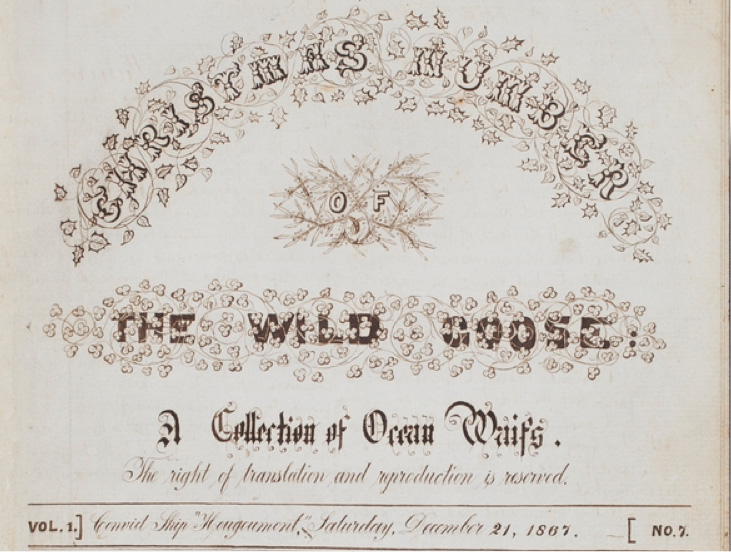 Cashman decorated the header with both his customary shamrocks as well as holly and ivy. This Christmas Edition of the Wild Goose was twice the size of any previous number and contained many poems. Most were by John Boyle O’Reilly, but this poem of encouragement was written by the newspaper’s editor, John Flood, possibly to encourage the younger and more sensitive O’Reilly.

When it life’s battle, onward fighting,
Struggling bravely day and night,
One only ray your rough path lighting –
Inward consciousness of right.
Be true and trustful – never falter –
Even though Fate may seem to frown;
Your purpose let her frown not alter;
Courage brother! Live it down.

Should calumny’s sharp tongue assail you
Breathing venom – undismayed,
Let not heart nor courage fail you,
At its hiss, be not afraid.
When cynic Envy, Coward Sneering,
Would the voice of conscience drown?
Still on – unswerving and unfearing;
Courage brother! Live it down.

Still forward – calm and self-reliant,
Disdainful of the little mind;
Of scoffing ignorance defiant,
Aside not looking nor behind.
Still persevere in right for ever;
Perseverance wins the crown.
Right ever conquers – wrong will never;
Courage brother! Live it down.