The Voyage of the Hougoumont – Entry 2

This article is the second in a three-part series.  If you haven’t done so already, please read Entry 1 here.

Much of the information we have about this journey comes from the diary of Denis B Cashman. *

Let’s take a moment to find out more about our writer.

Denis B Cashman was born in 1842 in Co Waterford. At the age of 20, he married his beloved Catherine (Kate) and they became the parents of three boys. He worked as a law clerk in Waterford and later in Dublin, where he got to know the leaders of the Fenian movement.

Cashman was arrested under the Habeas Corpus Suspension Act on 12 January 1867. His arrest warrant describes him as an ‘intelligent young man of considerable influence’. He was sentenced to seven years’ penal servitude for felony treason. The prosecuting attorney told Cashman that, in view of his youth, he could plead guilty to a minor offence but he refused. 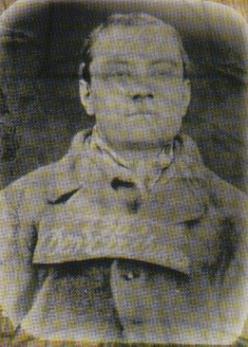 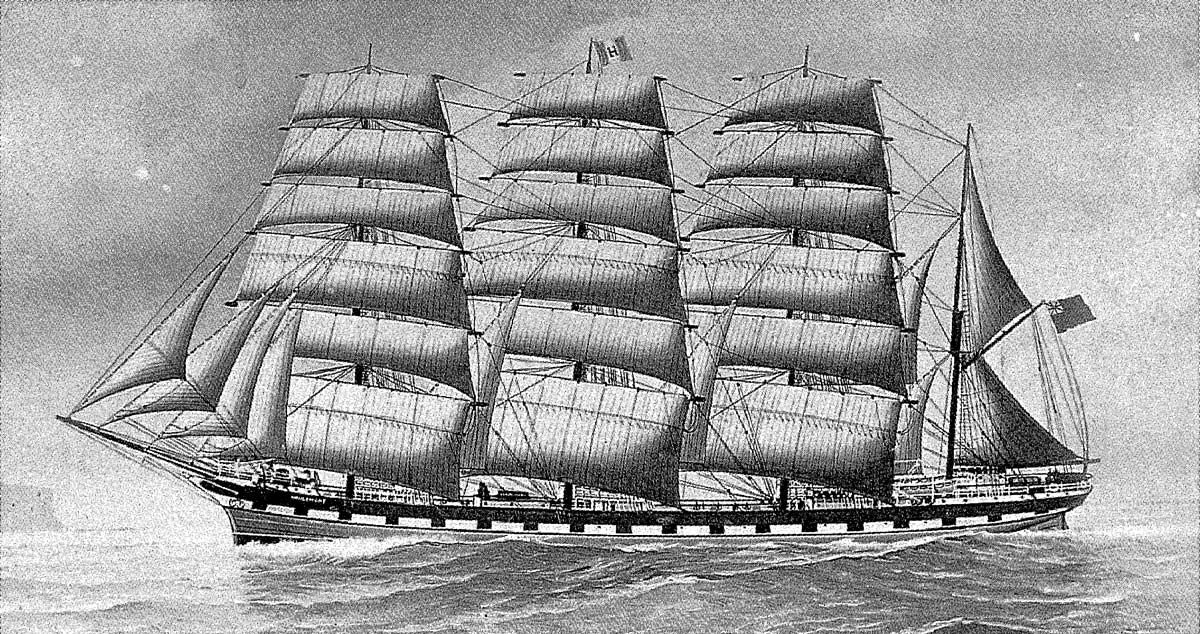 On 13 July 1867, Catherine Cashman wrote to the Lord Lieutenant General and General Governor of Ireland on behalf of her husband, asking for clemency. She explained that her husband’s salary was necessary for her support and the support of their three children. It may almost have worked as Superintendent Daniel Ryan supported the truth of Catherine Cashman’s statement and said…

‘If it would not be inconsistent with sound policy…it would be a positive Charity to this man and his tender family to mitigate, in some measure, the punishment inflicted on him’.

However, Denis B Cashman was in solitary confinement in Millbank Prison and would soon be on his way to Australia.

On Board the Hougoumont

The convicts below never tired of looking upward through the bars, although there was little to be seen apart from the swaying ropes and sails, and at night he beautiful star-filled sky.

In the words of O’Reilly:

“Only those who have stood within the bars, and heard the din of devils and the appalling sounds of despair, blended in a diapason that made every hatch mouth a vent of hell, can imagine the horrors of the hold of a convict ship.”

Strapped to the foremast was a black gaff or spar with iron rings, which when the spar was lowered to the horizontal position, corresponded to rings screwed into the deck. This was the triangle, where malefactors were tied up and flogged by the boatswain.

The forty-five civilian Fenians had a separate compartment in the middle section of the ship; however, the seventeen military Fenians (ex-British soldiers) were classed as, and placed among the criminals. Because most of the guards, many of whom may have served in the same regiments as the Fenians, were friendly and sympathetic, the military men were allowed to spend their days in the quarters of the political prisoners, but were forced to calm at night to the fore part of the ship.

O’Reilly became an exception to this ’tile, and was permitted to remain with the civilian Fenians permanently.

Now let us rejoin Cashman on board the Hougoumont…

7 October 1867
On this day I wrote my dear Kate – I trust in a more cheerful tone that I had done in my last letter. Letters were served out to several – I anxiously expected one but none came. I patiently waited for the next five days, for an answer to mine of the 7th but in this I was also disappointed.

12 October 1867
I had the mortification to see the Anchor weighed, and the Hougoumont, under full sail being towed out to sea from Portland, when a few hours additional delay would have brought me the so earnestly wished for letter, and a last Adieu from my dear Kate and boys. The Earnest left us, and under a favourable breeze we proceeded on our journey.

The forty-five civilian Fenians had a separate compartment in the middle section of the ship; however the seventeen military Fenians (ex-British soldiers) were classed as, and placed among the criminals. Because most of the guards, many of whom may have served in the same regiments as the Fenians, were friendly and sympathetic, the military men were allowed to spend their days in the quarters of the political prisoners, but were forced to return at night to the fore part of the ship. John Boyle O’Reilly became an exception to this rule, and was permitted to remain with the civilian Fenians permanently. #

“We (the Fenians) had a separate compartment in the convict portion of the ship. We were glad of this, as the majority of the convicts were the greatest ruffians, and the most notorious robbers in England… A good many of them had a great respect for our men and endeavoured to show it by several acts of good nature, and being most respectful in their deportment. Some of them were the most notorious characters – viz the scuttlers of the ship Severn. The owner appeared a gentlemanly sort of fellow. The great jewel robbers; the boy that stabbed his fellow-apprentice; a cool murderer; a fellow who killed his mother. In fact, they were an extremely proficient class at their business!”

Our food was pretty good, i.e. biscuit and tea – with occasionally a change of chocolate (cocoa) for breakfast. Pea soup, salt horse (beef) and preserved potatoes (like beans in an uncooked state) for dinner. Instead of the soup we had plum duff four times a week. A glass of wine each at 2.00 p.m. and a skilly (gruel) at 4.00 p.m. This was our dietary scale. We did not have near sufficient to allay the appetite – merely sufficient to support life.

Any of the convicts who misconducted themselves were put in irons, that is, an iron was welded round each ankle, to each of which was attached a chain, so their steps had to be measured by the length of the chain. It was awful to hear the unfortunates with the chains clanking everywhere they went. There were so many of them in them (the chains) that the clank was continuous on deck and below. They had to bring them to bed with them, as they did not get them off till the ship came to anchor.”

13 October 1867
I was on deck at 6 o’clock. (It was ) a very fine morning. This in reality was our first day to sea. We had Mass on board this morning it was served by J. Casey (the Galtee Boy). We all made ourselves quite comfortable below and talked ‘till morning.

14 October 1867
Up at 6. Went on deck immediately to enjoy the fresh sea breeze.

18 October
During the 15 and 16th we had some rough weather, but no accident. We got into the Bay of Biscay today – very rough weather, ship going about 11 or 12 knots, nothing of importance occurred, except being struck by a squall and nearly upset. Shipped heavy sea and had canvas torn to shreds.

20 October
Another ship in sight today. A whale was seen, but I wasn’t on deck at the time. We cleared the Bay (of Biscay).

21 October
Today we sighted the Spanish Coast. The ship with a fair wind, running about 11 knots.

23 October
A squall passed us today, no injury resulted, great number of porpoises playing around the ship.

24 October
(There was) An exquisite sunrise this morning. We had a debate today as to the best means of killing time and amusing ourselves during the voyage. I proposed theatricals, it was agreed to but in consequence of not having sufficient room for a stage, we abandoned the project. To substitute which I drew up a programme for a concert, which I expect will come off at 6 o’clock this evening. Jack (John Boyle) O’Reilly and I are preparing to recite ‘Brutus and Cassius’ but I believe the beggar doesn’t take much interest in it. The weather is getting extremely warm. Preserved potatoes given us today for the first time – we rather liked them.

The first of many onboard concerts took place on this night.

25 October
On deck early. (It was) a very cloudy morning, slight rain and (later) a beautiful day – a yard is square. The ship we sighted yesterday is still insight. Last night’s concert a decided success. We appointed a Chairman and Vice to preserve order and arrange the proceedings.

On the day of sailing from Portland Roads, O’Reilly penned the following verses:

Farewell! Oh how hard and how sad ’tis to speak
That last word of parting—forever to break
The fond ties and affection that cling round the heart
From home and from friends and from country to part.
‘Though it grieves to remember, ’tis vain to regret.
The sad word must be spoken, and memory’s spell
Now steals o’er me sadly. Farewell! Oh farewell!

Farewell to thy green hills, thy valleys and plains,
My poor blighted country! In exile and chains
Are the sons doomed to linger. Of God who didst bring
Thy children to Zion from Egypt’s proud king,
We implore Thy great mercy! Oh stretch forth Thy hand,
And guide back her sons to their poor blighted land.

Never more thy fair face am I destined to see;
E’en the savage loves home, but ’tis crime to love thee.
God bless thee, dear Erin, my loved one, my own,
Oh! how hard ’tis these tendrils to break that have grown

Round my heart. But ’tis over, and memory’s spell
Now stears o’er me sadly. Farewell! Oh, Farewell!