The Voyage of the Hougoumont – Entry 3

This article is the third in a three-part series.  If you haven’t done so already, please read Entry 1 here and Entry 2 here.

Let me introduce another, possibly the most famous, of the Hougoumont Fenians – John Boyle O’Reilly. It’s his image which appears on many of the photos of convicts of that period. Fenian leader John Devoy gave his impression on meeting O’Reilly as ‘a handsome, lithely-built young man of twenty years, immaculately turned out in the dark blue uniform of the 10th Hussars: gold braided across the chest, a shiny black busby set at a jaunty angle on his head. As Devoy got to know O’Reilly, he came to appreciate that ‘Mere boy that he was… {he had} a good military head…his ideas about the capture of Dublin, and the way to get out of the city, in case we failed, were all practical.’

O’Reilly was born in 1844 at Dowth Castle, near Drogheda where his father was master of the National school. He was apprenticed at eleven as a printer to the Drogheda Argus and at fifteen joined the Guardian in Lancashire as a journalist. He returned to Ireland, joined the military and is said to have recruited more people to the Fenian cause than anyone else of that era.

He was charged with ‘having come into the knowledge of an intended mutiny in Her Majesty’s forces in Ireland and not giving that information to his commanding officer.’ Because of his age (he was sentenced the day before his 22nd birthday) his death sentence was commuted to 20 years of penal servitude, but he remained in Western Australia little more than a year. In March 1869 he successfully escape on the whaling ship Gazelle, made his way to Boston and became a reporter and later the editor of the Boston Pilot. Together with his old friend John Devoy, he successfully devised a plan to purchase the Catalpa and mount an expedition to ‘steal’ the remaining military prisoners from Fremantle….but that’s a story that’s yet to come.

On board the Hougoumont, the military Fenians were held with the convicts, while the civilian Fenians had more freedom. Perhaps it was testament to O’Reilly’s charisma that despite having attempted three escapes from English prisons, and being a military Fenian, he was free to move around the ship.

He wrote poetry, which he recited at the concerts and he and fellow prisoner John Flood and Edward Kelly hand wrote and published a newspaper ‘The Wild Goose’ which Cashman illustrated beautifully with shamrocks on the heading. Each Saturday evening, O’Reilly read the latest edition aloud to his illiterate companions.

So let’s hear again from Cashman as he tells us about his longing for his wife and young boys, the happenings of the journey and the joy of their nightly concerts…

26th October 1867
A calm morning but squalls expected. I read over Kate’s letters today, a hundred times. Our second concert took place last evening. One of the convicts received 48 lashes administered by the Boatswain for some serious offence. He showed no mark of suffering and the prisoners cheered him at the last strike.

The concert program includes Shaun O’Farrell sung by John Flood and a duet, ‘I’ve wandered in my dreams’ by Cashman and Noonan.

‘I’ve wandered in dreams was greatly appreciated. Old Joe (Noonan) sang beautifully. This air recalls scenes and happy memories, never to be forgotten. John Flood sang in splendid style, but by jove Sheehan excels, he’s a card with ‘In came his sister’.

27th October 1867
Last night was terribly squally. We were struck about midnight by a squall and roused from sleep. The Jib burst in pieces. At 8 bells (midnight) we were roused with the cry of ‘Breakers ahead.’ The crew refused to go aloft. The foreyard got entangled with the shroud and there was great excitement on board.

The island of Madeira (Portuguese) (came) in sight this morning – about 30 miles distant, which accounts for the cry of ‘breakers ahead’ last night. I believe (and indeed so do all hands) that we had a narrow escape. Our concert last night as usual, some good songs sung.

28th October 1867
A beautiful morning. I was on deck early. The ship running about 8 knots under square spars. A sail in sight – ‘twas said this was our ‘Convoy,’ we believe not. A whale was seen to-day, spouting water about 60 feet high. A most exquisite sunset this evening. I watched him for about an hour sinking into the sea and have never before beheld anything so beautiful, the light clouds round the western horizon were burnished with the most varied and beautiful tints, parts appearing like lakes of burnished gold, fringed with a luminous silver border in parts where he peeped thro’ crevices of thick cloud it looked like so many furnaces or campfires in the distance. Just as he was sinking half emerged in the water, a ship appeared no larger than a bird gilded up atop its disc. After it had disappeared, the clouds assumed their most grotesque and fanciful appearance. When the gray twilight appeared, we were piped below and are about to open our concert for today. As I am to appear, I had better have a rehearsal.

At this point in the journey the Fenians seem to be holding concerts each night and Cashman gives details of various concert programs. One can only imagine the delight these men took in sharing a laugh together, as most of them had been held for months in solitary confinement before boarding the Hougoumont. Each concert concludes with a chorus of ‘Let Erin remember’.

29th October 1867
A beautiful day – we are nearing the tropics and the weather is getting very warm. The ship is doing about 5 knots. I have to go below to school for two hours, being and odd number, i.e. sleeping in the top bunk (between Kelly and Bains). Even numbers are to be down tomorrow. The concert of last night was very good. O’Reilly recited a poem, The Old School Clock, written by himself. Sheehan had us all roaring with his story. He has a refined brogue and splendid delivery.

30th October 1867
On deck and washed at 6 am. There was not a puff of wind, nor a ripple on the sea. The ship going at scarcely a knot – a great heat, about 70 degrees between decks – a sail in sight. Shoals of porpoises around the ship. We were almost becalmed – a beautiful sunset. I enjoyed the first cigar today in 12 months. I occasionally get some tobacco – it’s a luxury here. The stern sails were up last night.

1st November 1867
Last night’s programme to be performed tonight, All Saints Day. We had Mass and I received Communion for the second time. We passed the Tropic of Cancer today and it was an awful warm day.

2nd November 1867
We are nearly becalmed today – very warm – 13 sail in sight. A large shoal of dolphins playing around the ship and chasing each other through the water. At 1 o’clock a large shark crossed our bows – about 17 feet long. There are great numbers of birds flying about (I think a species of swallow). 2.30 A boat put off from our ship armed with a harpoon and captured a very large turtle which was floating through the sea. They had great difficulty in lifting him in.

5th November 1867
We held a meeting to see if we could start a newspaper. The meeting was composed of Con O’Mahony, J. Flood, Duggan, O’Reilly, Coady, Casey, Noonan and self. We passed resolutions, appointed a chairman and finally settled to start if we get paper. John Flood was appointed editor and John (Boyle) O’Reilly sub editor. Kelly is the manager.

Running at 8 knots with wind. The sails were left down to bring fresh air between the decks. I received Communion this morning but no Mass. We passed a Brazilian Mail Steamer this leg homeward bound. Saw a huge bird called a cormorant.

6th November
On deck early – land ahead – the Island of St Antonio. One of the Cape de Verde Islands – about 30 miles off. It belongs to Portugal. There were shoals of porpoises around the ship.

12o’clock: We have just passed St Antonio. It looks mountainous and volcanic with waterfalls down its sides. We saw two high cones, probably craters and a curious rock shaped like a castle.

4 o’clock: We are now passing Cape of St Vincent -between both islands. I had a splendid view of St Fogo. It has two immense craters, one about 8000 feet high, its summit is covered by a thick white cloud which hides a great part of the island.

7o’clock: We have passed the Cape de Verde islands. McG playes ‘Garryowen’ on the Coronet. It’s very warm between the decks. Our concert is about to begin.

7th November
We had a meeting and debate as to what our paper should be called when finally we resolved to it ‘The Wild Goose’ (Kelly’s suggestions). The first number to appear will be on Saturday 9th so I must go at the heading (a wreath of shamrocks with the name peeping thro’ it). I expect to be rather busy for the voyage at it. 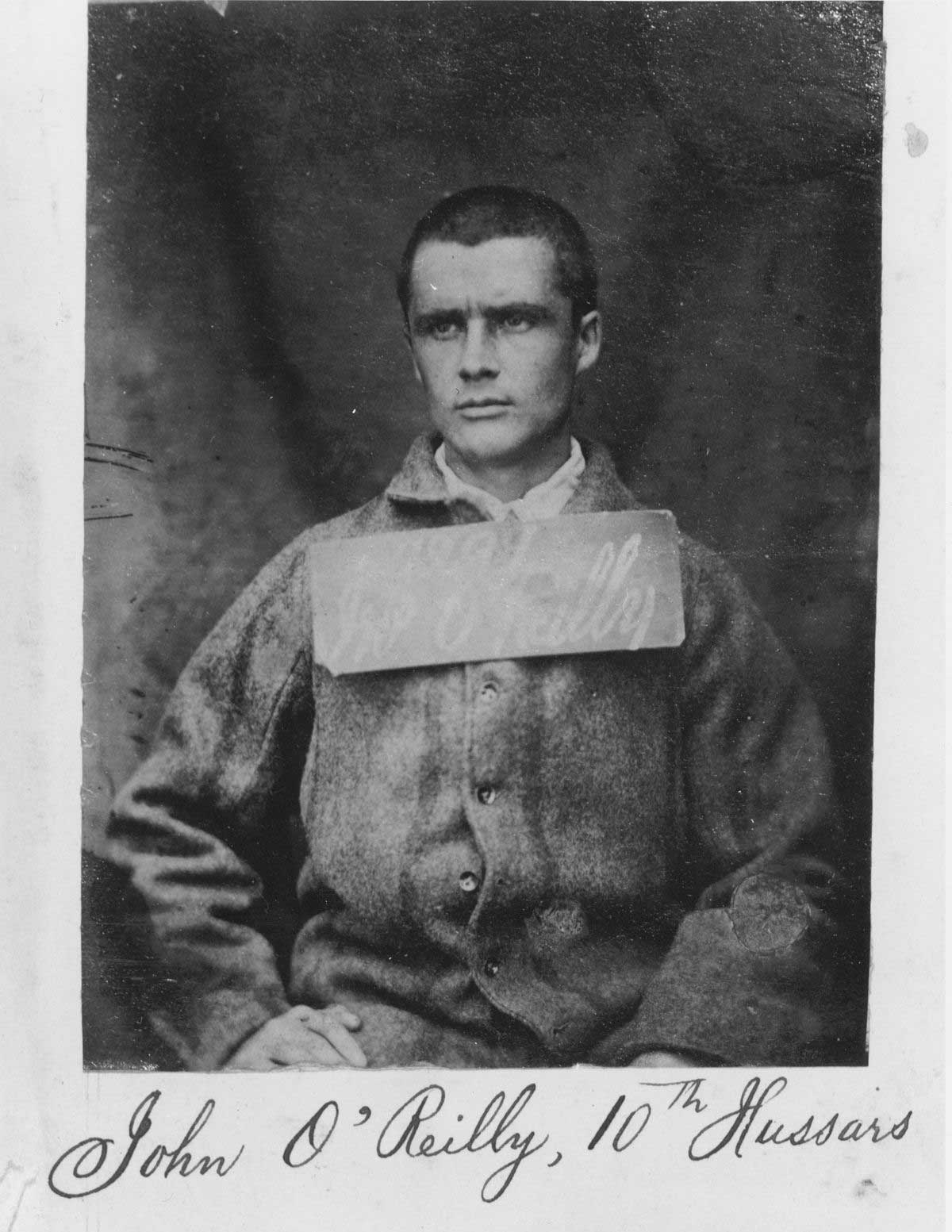 The Wild Goose – A Collection of Ocean Waifs

The Wild Goose is held in the archive collection of the State Library of New South Wales. The Fremantle Prison has applied to borrow this valuable document for display during the festival and as an ongoing part of their ‘Exhibition of Transportation’ opening on 9 January 2018.

Any sponsorship to help cover the cost of this valuable document returning to Fremantle would be very welcome. Contact info@feniansfestival.com.au