I recently spent a week on Christmas Island – so named because an Englishman came across it for the first time on Christmas Day many years ago. It’s a curious place, allegedly uninhabited prior to 1888. Since then, it’s been part of the British Empire, for a few years during World War II a part of the Japanese Empire, thereafter under the rule of Singapore and, since 1958, along with the Cocos-Keeling Islands, part of the Commonwealth of Australia. Together they are the Indian Ocean Territories. 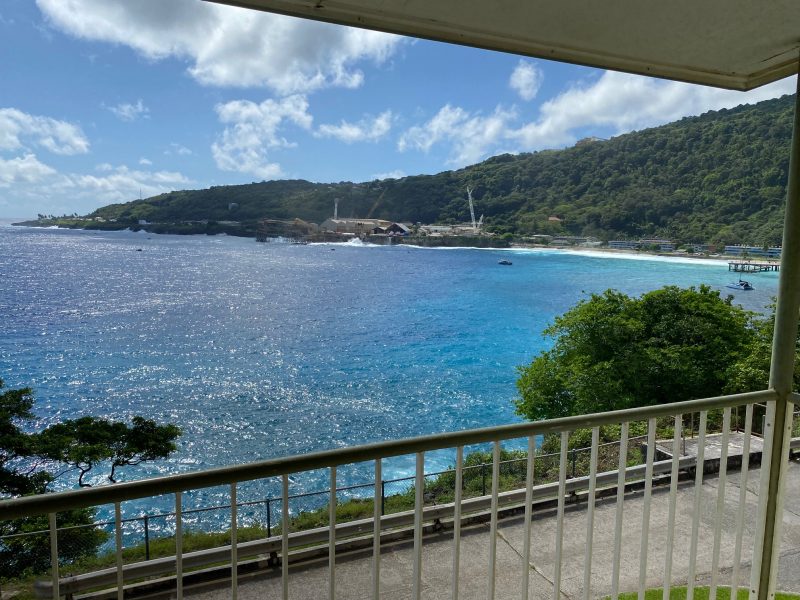 Before the reader’s imagination gets too carried away, its no tropical paradise in the popular sense. There are no sweeping sandy beaches, no beckoning lagoons and no luxury resorts. It is undoubtedly tropical and monsoonal. During our stay the temperature ranged from an overnight minimum of 26 degrees to a daytime high of 29 degrees. Clouds can gather in minutes and rain squalls, some very heavy, come and go.

What makes the Island curious? Its rich racial mix for starters. The population, excluding tourists, was in the vicinity of 1,600 to 1,750, comprising people of Chinese, Malay, Australians of European and Asian descent and a small number of people of Indian descent. My wanderings around the area closest to the port took me to a mosque, a Taoist temple and the Roman Catholic church. At the latter, an 83-year-old Chinese man, originally from Penang State in Malaysia, proudly and generously opened the church and told me about its construction and gardens. 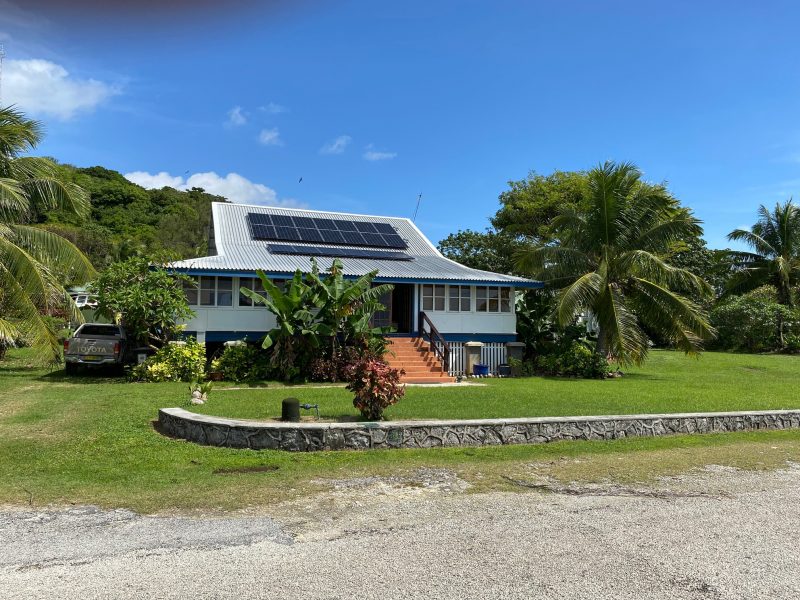 The locals find themselves in a curious position. They are part of Australia, yet far closer in distance to Djakarta and Singapore. Electorally they are part of the federal seat of Lingiari yet they have little in common with the Northern Territory and places like Katherine and Alice Springs. They have a West Australian postcode, listen to ABC Kimberley on the radio, rely on Fremantle and Perth for the transport of goods and perishables by sea and air, respectively and are part of the Western Australian justice system when it comes to the enforcement of everyday law and order.

Since 1899 the Island’s principal income earning activity has been the mining of phosphate. It still continues, although on a relatively small scale, compared with the massive mines of the Pilbara. During our week on the Island there were a couple of ships waiting on the distant horizon, one, an Australian patrol craft and the other, a small freighter waiting to load phosphate. The Harbour Master explained that the swell was too dangerous to allow the freighter to begin loading. The Island’s only port is Flying Fish Cove which has both the phosphate loading facility and not far away, a more modern service jetty which principally caters for the pilot boat, works vessels and dive boats. On our first four days we snorkelled at or near that jetty. For the next three days the jetty was closed and swimming prohibited as the swell crashed into the sea wall. 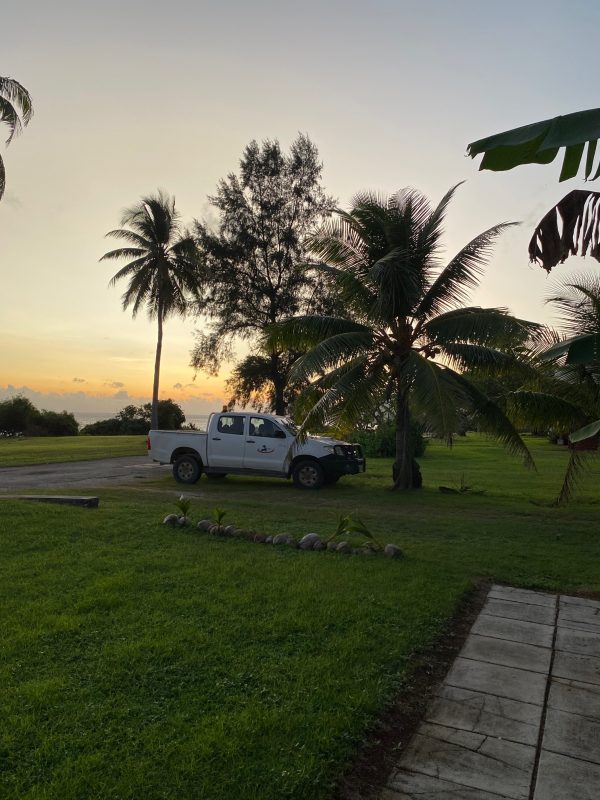 Dawn from our front lawn at Settlement – no shortage of coconuts

We hired a vehicle to get around. Apart from school buses, public transport is thin on the ground. We didn’t choose it but we were allocated a manual Toyota Hilux twin cab 4WD utility which had seen better days. There was a spare tyre, a wheel brace and a rope in the tray back. I didn’t see a jack but we assumed that it was there somewhere. The police suggest that all visitors call into the station and borrow an EPERB to be used in the case of breakdown or becoming hopelessly bogged. Displaying too much confidence and, perhaps stupidity, we didn’t bother. We managed, with some luck, to explore much of the island.

63 percent of the island is National Park and much of that is rainforest. Most of the roads outside of the main urban area are rough and difficult when wet. There are a number of small beaches accessible only by 4WD track and walking trail, the latter often through rugged terrain and slippery when wet. The tourism office provides a very useful walking trail guide with degrees of difficulty clearly noted.

We did go in search of the much talked-about Commonwealth Immigration Detention Centre but we never saw it. What the visitor can see is a sentry box and a boom gate at the entrance to an access road. We walked up a nearby track in the hope of getting a birds-eye view of the Centre but got no further than another boom gate and a large sign that told us that it was an “Active Mining Area”. I slipped under the boom gate. An alarm went off. We retreated back down the track, not having caught sight of the Detention Centre, but with the feeling that someone, somewhere was watching us.

What you can see in great numbers on the ground are crabs and chooks. The former is mainly red and are found in numbers everywhere, in the rainforest or on the road or your front lawn. The latter are, I gather, introduced and are regarded, at least by humans, as not edible. I was told that their eggs taste like coconut. I didn’t see or hear a dog. That, I’m sure, is the result of public policy. I was told that some people still have cats but I didn’t see any.

In the skies and in the tree-tops, bird-life is varied and plentiful. Frigate birds are patrol the coastline, boobies’ nest on the tree tops along the hill slopes and the golden bosun is eye catching. 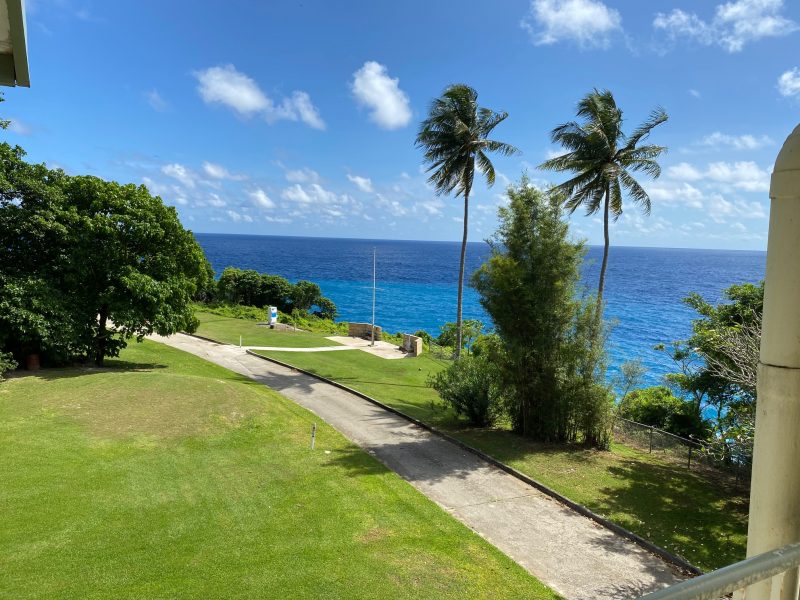 Another view from the Administrators House/ Museum

What keeps the island viable? Clearly, mining of phosphate has been a staple but as we know, mining is finite, particularly when there is only the one mineral being mined and only for so long as there is a market. Another source of income is tourism. That is likely to remain so, especially among enthusiasts of SCUBA diving and dedicated naturalists and bird-watchers.

We visited another pipe-dream and would-have-been tourist attraction, a casino, complete with luxury accommodation and a flash restaurant, built decades ago and long since closed. Again, we got as far as the locked gate. I am told that a caretaker lives there keeping a watchful eye over the gambling tables and chips. One was left with the conclusion that the climate and the rainforest might slowly reclaim the site.

As a small matter of irony, I should note that yet another elderly Chinese resident of the island told me that the casino, with its sweeping, dramatic views of the Indian Ocean, was, before the development, the place where the island’s rubbish was dumped into the sea. I understand that there is now, at another place, a sanitary land-fill site which takes domestic and commercial rubbish. There is no recycling. Old vehicles – utilities trucks and machinery lie dormant and rusting on the edge of the rainforest. Commerce brought them to the island but commerce does not take them away at the end of their useful life. 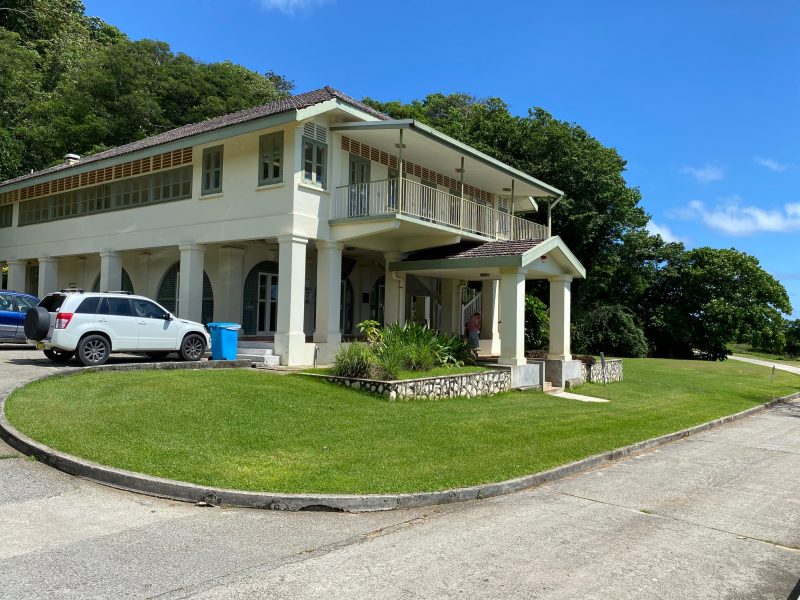 On a brighter and final note, the island has a very fine Senior High School, an outdoor cinema, a picturesque golf course and an excellent museum housed in the old Administrator’s House overlooking Flying Fish Cove. There is still an administrator of the Indian Ocean Territories, a resident of Christmas Island. On the island itself there is a Shire President and an elected Council. The Union of Christmas Island Workers has had some notable and much-needed achievements in the area of fair pay and conditions.

During our stay we ate at the Golden Bosun Tavern and two Chinese restaurants, The Lucky Ho and the CLA. At each we sat under cover on a verandah. The former provided good service and food but the cuisine was, as we expected, fairly typical tavern food. We were disappointed that there seemed to be no Malayan restaurant but we did enjoy both Chinese establishments, each of which appeared to be family run. Intrigued by the name “CLA”, we spent several days pondering what those initials stood for. We discovered, late in our visit, that it was the Chinese Literary Association. The food and service at both were excellent. Sensibly, not all establishments were open every day so we visitors learnt the timetable quickly.

The Islanders were welcoming and informal. For the visitor there is that languid feel that is often associated with the romantic notion of tropical island life. The mix of cultures is fascinating. So, if this read had made you curious, take the trip – it’s a long, but very worthwhile journey.