Take a deep breath of tree

When a forest is under threat from logging or mining or housing or any other aspect of modern life, trees themselves can get a bit overlooked in all the protests, arguments, gestures and political argy-bargey. Sunday 20 February was bright and hot, but as soon as we entered the shade of the forest, the light became softer and the heat fell away. A small breeze started up. Leaves crunched underfoot, the voices of children — “there are bandicoots in there”, one child said to an even smaller one – if it hadn’t been for these sounds it would have been nature quiet. You know what that sounds like: a faint scratching, crackling and rustling, warbling and chirping, both distant and near. A harmony of soft colours: pale rose and mustard yellows, dusty pink-greys, tans and mushroom browns tune with a thousand shades of green and grey. Textures beckon to touch, eucalypt on finger tips; vague shapes brush past: a bright sparkling web, tickling grasses, shadows passing over all. I look around, breathe a little more deeply and feel my shoulders relax.

Many Freo people are in Jarrahdale on this Sunday to join locals, past and present, to register a protest against logging a small, unprotected forest. I look around at the 100 or so faces around me. Beyond the stand of jarrah and other trees, bushes, vines and wildflowers, a few huge trees lie upended, their slayers long gone. This part of the Jarrahdale forest, close to town and very, very close to the Serpentine Dam, is under threat from logging. The irony here is that, just beyond where we are standing (and obeying the law by going no further) is the Reservoir Protection Zone, an area forbidden to the public, and that is exactly where the loggers intend to go. 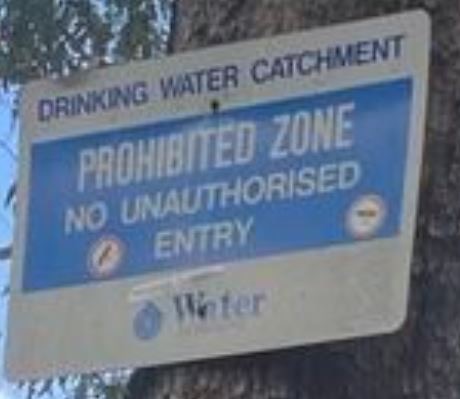 The Serpentine Dam, you know where it is, about 60kms from Fremantle, gives us inordinate amounts of water each year. I can tell you the figures if they mean anything to you: 39 gigalitres or 1.4 billion cubic feet of drinking water to the Perth Metro area each year. Yes, water measured in feet. The dam’s importance to us all hasn’t prevented plans for a ‘Jarrah Integrated Harvesting operation’ within the Reservoir Protection Zone, a boundary established, very importantly, to prevent water contamination.

The Forest Products Commission or FPC, the government body behind the plan, has announced that it will begin laying roads for heavy construction and logging traffic next month.

Some Jarrahdale residents received a letter last year from the FPC saying logging will begin in March 2022. In the next few weeks, unless the Minister orders differently, loggers will take their machines past no trespassing signs to cut down trees. It’s just wood to be sold at servos, one Jarrahdale resident commented, and they are right. As the FPC website says, only ten per cent of all the jarrah harvested is for timber, the rest becomes wood waste, firewood (yep, servos) or charcoal for silicone production. Neither charcoal nor firewood makes money so our mature jarrah trees are only useful because they are nearby and accessible, sorry I mean, good for “efficiency and cost” reasons.

Senior resident and Chair of the Jarrahdale Forest Protectors, Jan Star (well-named, Jan) sees it this way: “As taxpayers, we’re footing the bill to ruin this environment when there are perfectly acceptable sources of sustainable timber available elsewhere. There are countless tree farms lying fallow or going broke because the FPC undercuts their business with half-baked plans like this.”

In addition to the problem of logging, there is bauxite mining. The clearings you see in the photo of the dam above are mine sites. Alcoa clears more forest annually than any other company and is currently requesting permission from our Environmental Protection Authority to mine the northern side of the dam up to the outskirts of Jarrahdale. By July, the people of Jarrahdale with the support of many others, will have to write submissions to argue why Alcoa cannot go into the same catchment area to dig a bauxite mine. The patch of mature jarrah forest falls right in the middle of Alcoa’s proposed Myara North bauxite mine, and Rio Tinto has also applied for a mining exploration licence in the area. If the area is allowed to be logged, it may lead to Alcoa and other mining companies getting approval to strip mine. Both logging and mining activities will be done only 100 metres from the water’s edge.

Many of the people at the protest last Sunday live in Jarrahdale, some had come back to Jarrahdale because they were born and grew up there, some had simply once lived there. All ages came, some hobbling on sticks, some elderly, some bringing children and babies, some arriving on horses (yes two, really); some coming from Mandurah, Hilton, Freo, Hammy Hill. All came because they care and because of this, these relatively few people now have to learn to speak up to the politicians. Or, speak up once more to the politicians. The logging and mining companies do not have to justify their activity in the context of climate change and biodiversity but those who oppose them must draw on this context to show the short-sightedness of these commercial enterprises.

All have to argue why the marvellous phenomena that is a tree should be protected as it provides shade, subdues the heat, enriches and stabilises the soil, shelters the animals, birds and insects — we saw a tiny soft grey nest lying half-broken on a fallen tree — and produces our oxygen (yes, I shouted that bit). And, most importantly for climate change, trees store carbon: “Science tells us that the range for forests with continuous canopies is about 0.5-2 tonnes of carbon per year for each hectare.” – www.chiefscientist.gov.au 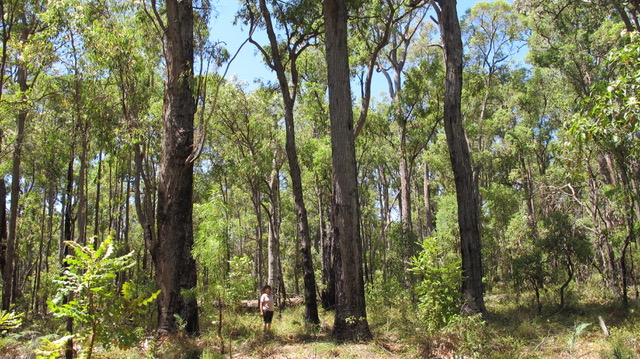 The protestors have gone home now and the big machines have yet to arrive. We humans have a small breathing space and so do the trees. The trees stand, neither waiting nor expecting, just being. I am not a tree hugger, but I did put my hand out to touch (ok, caress) the bark of one of the larger trunks – two people could have embraced it, but only just— the bark was so fine and layered it seemed to float over the trunk like a feathered cloak. Under my fingers, fine flakes of bark, some charred, some shining with dark red sap, some blackened though no ash came away on my fingers. A mysterious thing, a tree, especially when one is reminded of its mirror image below ground. Reaching down, pushing deep and holding soil; reaching up and swaying in a seemingly endless sky (okay, I’m no scientist). Moving the air, creating the air, the trees’ rustling leaves almost make speech. Almost, but no. For we, it seems must speak for the trees, and must do so, mostly in government-speak.

To stop this forest in Jarrahdale becoming a wasteland, do write or call Minister Dave Kelly. Maybe do what I do, as a perennially nervous phone caller, write down what you want to say first, then call. One of the Minister’s staff will answer and she or he will take down your details and then listen politely, as is their job. In such incremental ways, saying the problem out loud to someone with influence, signing a petition, showing up in a beautiful forest on a Sunday morning, then individual voices will be heard as they were in Barton recently when such protests and calls stopped logging in a similarly lovely patch of forest. Sadly, stopping such activity is a bit like trying to plug a very leaky bucket.

So, if you have ever taken a deep breath of forest and know how precious it is, then do whatever little you can manage: ring, talk, sign, read, walk. It is, of course what some Freo people have done well since the first attempts to stop logging in native forests started over fifty years ago. Logging of native forests will stop in 2024 but meanwhile logging is still proceeding and the mining and the thinning of forests will continue after that. The habitat of endangered species also cannot wait two years for protection. You can see how the leaky bucket thing works cant’ you.

I’ve strayed too far now, we all have, from that delicate light, the soft breeze, the children’s laughter. The men and women’s determined faces, all ageing faces. Mine, theirs. Unlike us, trees can live for hundreds and hundreds of years and it’s in our power to allow them to do just that. The consequences of not doing so are grim as Judith Wright warns in her iconic poem “Australia 1970”: ‘…we are ruined by the thing we kill.’

** Thank you to WA Forest Alliance, Jarrahdale Forests Protectors and Forests Product Commission for their information.

*** If you would like to follow up you can do so with Minister Dave Kelly by telephone on 6552 6100; Jarrahdale Forest Protectors via kerfoot50@bigpond.com, and WA Forest Alliance via wafa.outreach@gmail.com