Who is ancient enough to remember the wonderful Alistair Cooke and his ‘Letter from America’?

When I was nominally in the service of my country, based in Germany in the 1970s, I became hooked on Cooke’s weekly broadcast. He was a transplanted Englishman, arriving in the United States in 1946 and remaining there for the balance of his long life.

Letter from America came to mind as I pondered a title for this column. Notwithstanding that I’ve been partially transplanted from Fremantle to the south coast, the Editor, Producer, and Captain of the Ship was kind enough to suggest I pen a regular account of life in these parts. At first I demurred, not so much because there is Sweet Fanny’s to talk about in this idyllic conclave – there is – but more to do with the notion I should be writing Really Serious Stuff, whatever that might look like.

But two things have made me more amenable, leading to a place where perhaps the simple delights of a bush hideaway and serious commentary are not mutually exclusive. The first occurred yesterday when we took a friend out to lunch. With precious little choice, we settled on the Boston Brewery, just out of town. “Don’t forget to bring proof of vaccination”, we reminded our friend, before picking her up. It was, for the three of us, our initial foray into a restaurant experience, post-31 January.

Met in the foyer by a young lady, our wrists were stamped after we produced paper proof (in my case) and digital images in the case of my companions. Sitting outside, we were able to unmask and enjoy a robust conversation while eating pub food and brushing away the attention of a large dog at the adjoining table. Halfway through the meal, another staff member did the rounds, checking that everybody was appropriately stamped. Naturally, the conversation turned to a former era when a stamp of identification foreshadowed dire consequences.

Later in the day, with the battered fish still digesting, I tuned into The Drum on ABC TV. The program has been in recess and it looked like the evening host, Ellen Fanning, wanted to compensate for an extended silent interlude. Luckily, her guests were forceful enough to cut across her bows, and we were treated to a good discussion on a number of issues, one of which involved an assessment of the American podcaster, Joe Rogan, who seems to be a household name to anyone under 45. Rogan, for those of you who are unfamiliar, conducts three hour conversations and courts controversy. Spotify pay him zillions of dollars as Rogan and his guests shoot the breeze about everything and anything. More recently, after a slew of misinformation about vaccination, a number of celebrities have pulled the pin with Spotify – Neil Young, Joni Mitchell and Sharon Stone among them. It seems to be having some effect because Rogan has climbed down a peg – but not so far that he will satisfy his detractors.

Astute readers will note that my two examples are both related to the pandemic. What else is there to talk about, some might say? Well, there is plenty but the point of me mentioning my first meal out under the new restrictions, and Mr Rogan and his podcast, is to underline how far we have come since I was listening to the velvet tones of Alistair Cooke, four decades ago. What would Cooke have made of social media and the plethora of information spilling into cyberspace and across the airwaves – not just on a daily or weekly basis but moment by moment? It would, I think, have been met with a slow shake of the head and a deep sigh. Born in 1908 and passing away in 2004, Cooke lived through the 20th century and all it offered (or detracted from) our human evolution. During his time, television burst forth with its noisy tentacles of addiction, but radio still reached into many, many homes, bringing humour and sobriety in equal measure. Along with daily newspapers, the ‘voice-box’ was a primary source of information.

I am pleased to report a voice-box has pride of place in our Denmark abode. Our Freo neighbours were having a cleanout and we accepted their generous offering. While their old GE radio is not exactly a Bakelite relic from the Fifties, it’s big and clunky enough to be a far cry from the fancy little numbers you can pick up these days in JB Hi-Fi for the equivalent of half an hour’s pay in the pocket of a FIFO worker. We love it. And we love it even more to have discovered 99.7 FM Denmark Radio. Advertisement-free, we are treated to tunes that we remember and interviews with local folk that touch on interests dear to our hearts, particularly environmental matters. 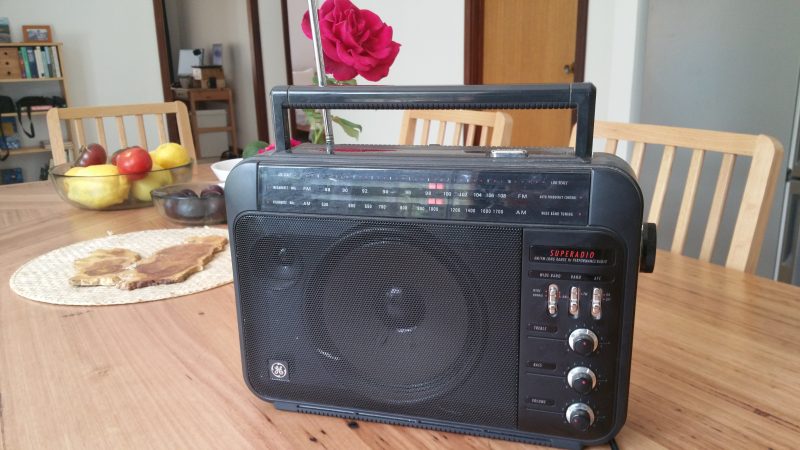 All of which brings me back to Alistair Cooke. He had the uncanny knack of being able to segue from one contemporary happening to another, while simultaneously casting an eye over his shoulder and bringing into focus a past event or vision that was impacting upon the current state of play. It was like entering an enchanting dance, where life’s connections and contradictions were encapsulated in a short story, told on-air. And what do you know – the wonderful BBC has archived recordings of Letters from America and made them available online.

In the course of writing this column, I selected an episode from 12 December 1980. Cooke leads off by talking about tensions between Russia and the West – this time it was not Ukraine but Poland. Curiously, the rhetoric could almost be transposed into the present day. The Russians arguing about the need to protect their security while the US and Allies talk about freedom and the democratic right of Poles to choose their own path.

But that Letter from America neither focuses upon discord in Europe nor economic malaise. An event the previous evening wipes everything else from the headlines. John Lennon has been murdered. Cooke, who came of age between the two wars, confesses his lack of rapport with Lennon’s generation. But he is impacted upon by the outpouring of grief, and aware the assassination is a further if not final nail in the coffin for the idealism of baby boomers, and of peace and love.

As I look around me in this southern hamlet, there is ample evidence peace and love still flutters in many a heart. But it would also be true to say that those of us who raised this banner at one time or another have been obliged to adopt a pragmatic cloak. Most of us have had working lives, raised families, made ourselves a home or two, copped a few health issues, and wondered about surviving until old age – only to find that as far as our kids and grandkids are concerned, we have already entered that vintage.

Cooke lived until he was 95. His public persona reverberated with gravitas and a wry understanding of human foibles. He also came from a white world of privilege – something that might make it a touch harder to get a job these days with the BBC. Lennon, another white bloke with a particular talent, was cut short at 40. His private and public life seemed one and the same. What, I wonder, will people say in 40 or 50 years, looking back at the likes of Joe Rogan?

Who knows? Speculating about the future is probably as futile as bathing in the warm nostalgia of an imagined past. But one thing is clear to me. We are all in this together. And though I’m a “hopeful pessimist”, to pinch a self-description from Iain McGilchrist, there is still space to imbibe the echo of Lennon’s haunting masterpiece:

You may say I’m a dreamer….. But I’m not the only one…. I hope someday you’ll join us…. And the world will be as one.