Home 2021 September 29 Don’t Miss The BIGGEST Debate Of Them All – Thursday Night!

Don’t Miss The BIGGEST Debate Of Them All – Thursday Night!

It’s nearly the end of September.

You know what that means.

A number of things, actually. Including that the AFL Grand Final is now behind us and Christmas will soon begin appearing in supermarkets near you.

It also means the BIG MAYORAL DEBATE is nearly upon us.

Fremantle Shipping News is one of the hosts of the debate along with University of Notre Dame, Fremantle Chamber of Commerce, Fremantle Network and Oxfam. 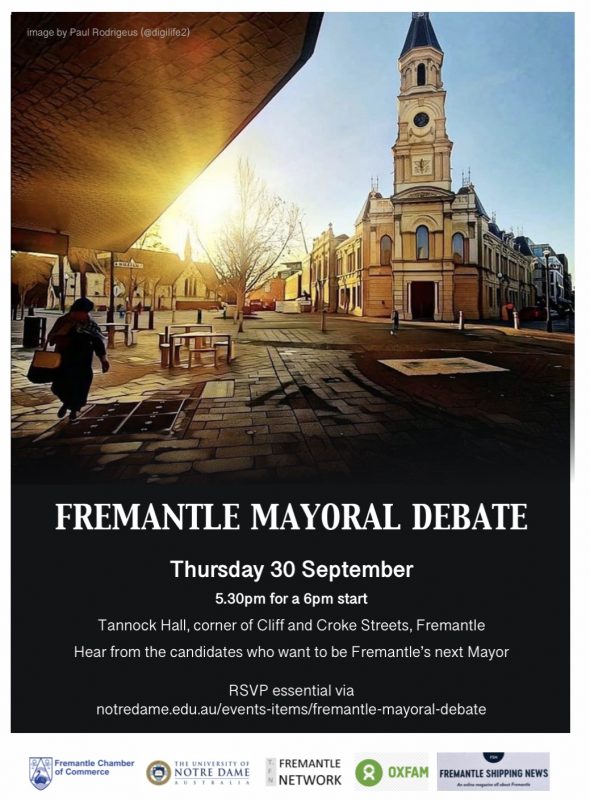 We look forward to seeing you there!

The three key candidates, Marija Vujcic, Hannah Fitzhardinge and Adele Carles – mentioned here in the order they appear on the ballot paper – will be there outlining their cases for election as Freo Mayor – the second most important elected office in the land after Premier!

The candidates will state their cases, field questions from our neutral moderators and from the floor from you, the electors, before summing up their pitches for election.

We’d love to see you there – just turn up and join the action.

We’ll be running a Twitter feed on the night as well!

Should be a most informative and entertaining evening. So don’t miss it!

If you want to do some prep for the Big Mayoral Debate, you might like to tune into the podcast interviews we have recently conducted with these here key candidates which you will find here.

Be there or be square!