Phil regularly contributes to our The Trees Of Fremantle feature. Recently, he was on special assignment for the Shipping News in the Fitz. This is his report, replete with his amazing photographs. Plainly, it is time ‘to wander out yonder’!

‘The Fitzgerald River National Park is 329,882 hectares in size, making it one of the largest in Australia. Bordering the Fitz are the seaside towns of Bremer Bay to the west, and Hopetoun to the east. The farming communities of Jerramungup and Ravensthorpe are located inland, on the northern edge of the park, inside the biosphere’s zone of cooperation

The Western Australian Department of Parks and Wildlife reports that there are 1,748 identified plant species in the Fitz, which represents almost 20% of the state’s described plant species. 75species are endemic to the park, a further 48 are seldom found anywhere else and 250 species are listed as rare.’.

Not surprisingly, on 6 May 2016, the Fitzgerald River National Park was included in the National Heritage List for its outstanding diversity of native plant species, including many plants which are unique to the local area.

In May 2017, the Fitzgerald was approved by UNESCO – the United Nations Educational, Scientific and Cultural Organisation – as a biosphere reserve.

This is a lengthy intro, I know, and about a Park not in Freo, but you just have to visit it, it has so much to offer! It’s the perfect getaway especially in these covid times.

My partner and I recently returned to Freo from a wonderful three night stay in the Park. I have been visting for around 20 years now and really adore the place. The Park is so large you may not get to all of it in one visit. It is pretty much split into the East and West sections, with quite a drive in between. The East is easily accessed from Hopetoun. We hung out in the West only on this visit.

To me the Crowning Glory of this region is this fine species, Hakea victoria or Royal Hakea 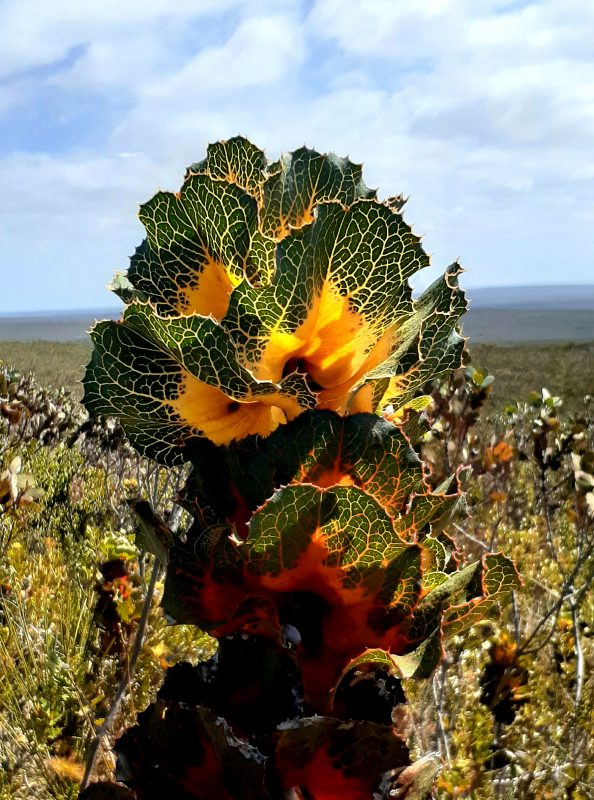 In his 1947 original newspaper account of this species, James Drummond wrote –
‘To this most splendid vegetable production which I have ever seen, in wild or cultivated state, I have given the name of our gracious Queen, Hakea victoria. It will soon be in cultivation in every garden of note in Europe, and in many other countries.’

I once read somewhere about an early explorer strapping one of these to his horse, riding back to Fremantle and shipping it back to England for Her Majesty to inspect for herself!

There are several ‘Mountains’ to climb in the Park. Ironically, early explorers named three of them East, West and Middle Mount Barren. Little did they know at the time that the area around the Fitz would later be acknowledged as one of the world’s richest in terms of plant diversity!

On our recent visit we climbed West Mount Barren. Shortly after leaving the car park behind and beginning the accent many beautiful plants were on display. These are some of the flowers we encountered. 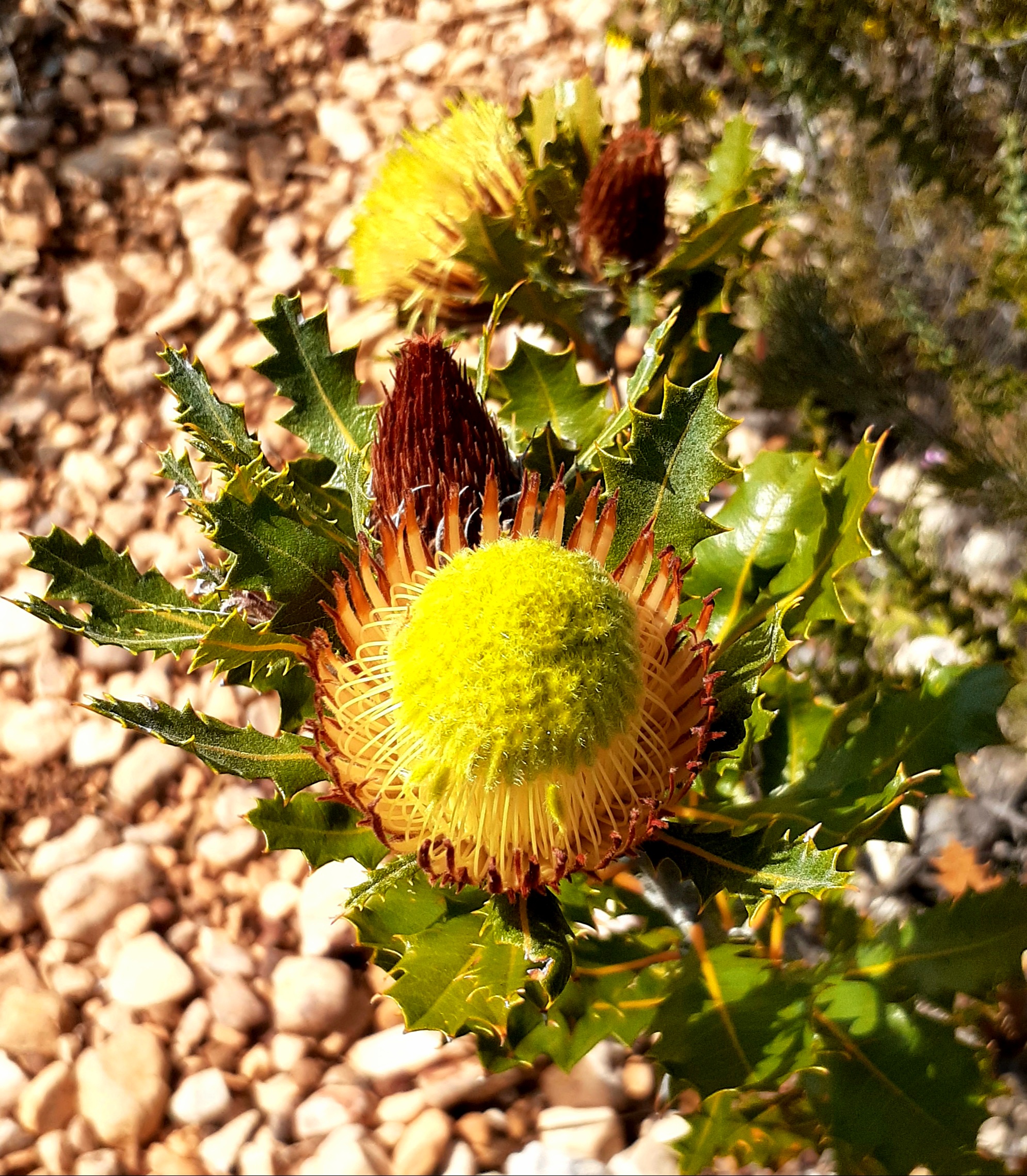 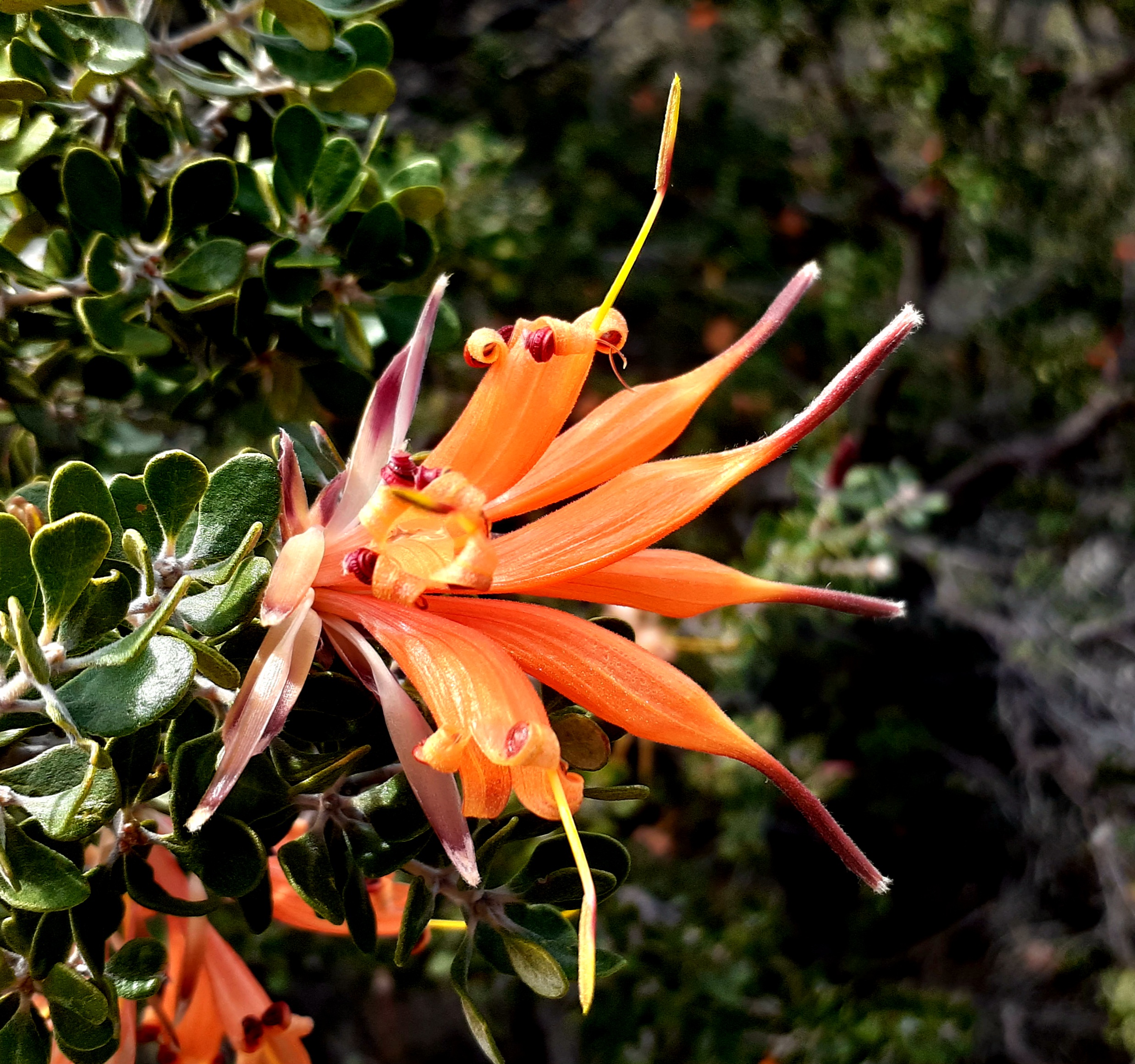 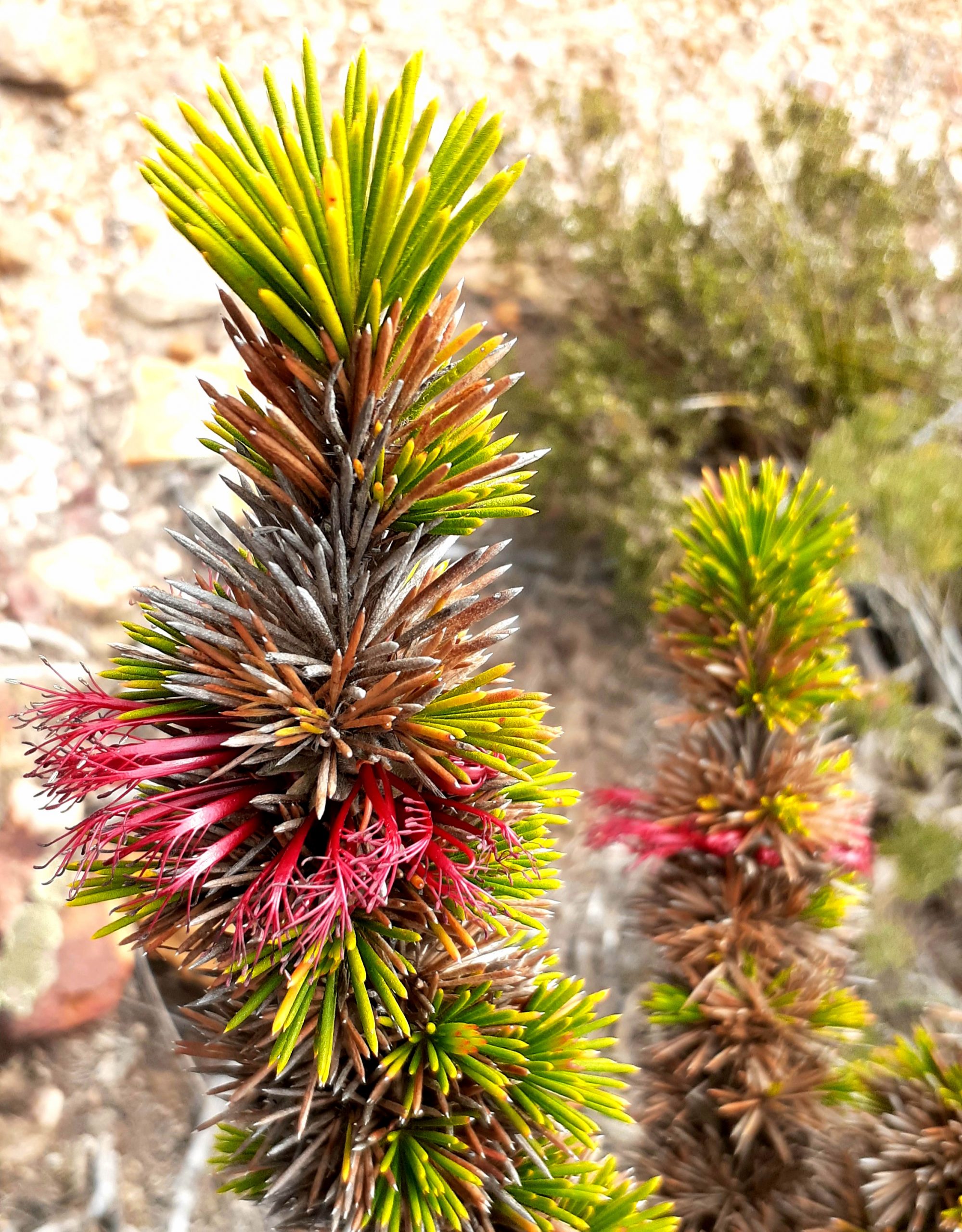 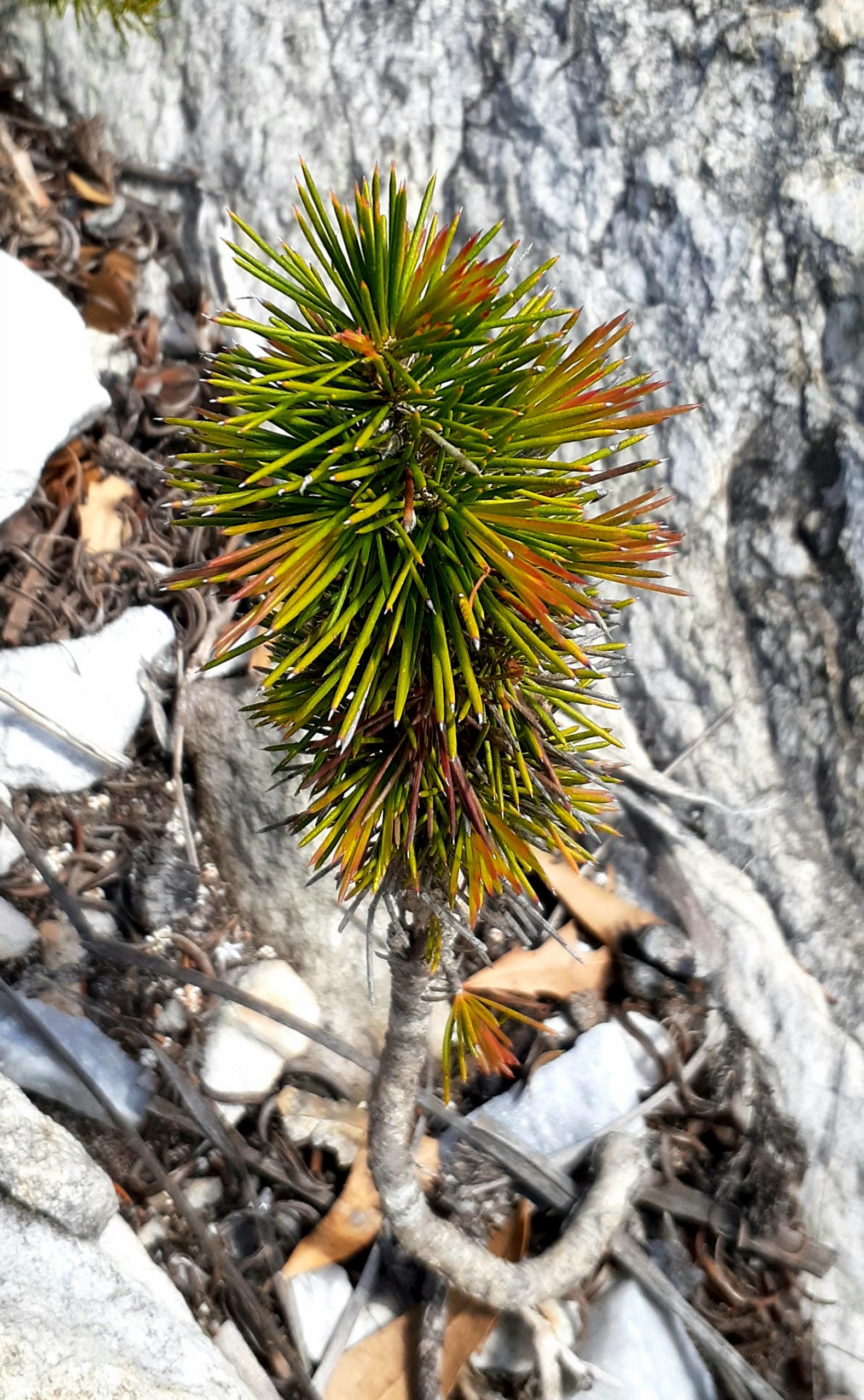 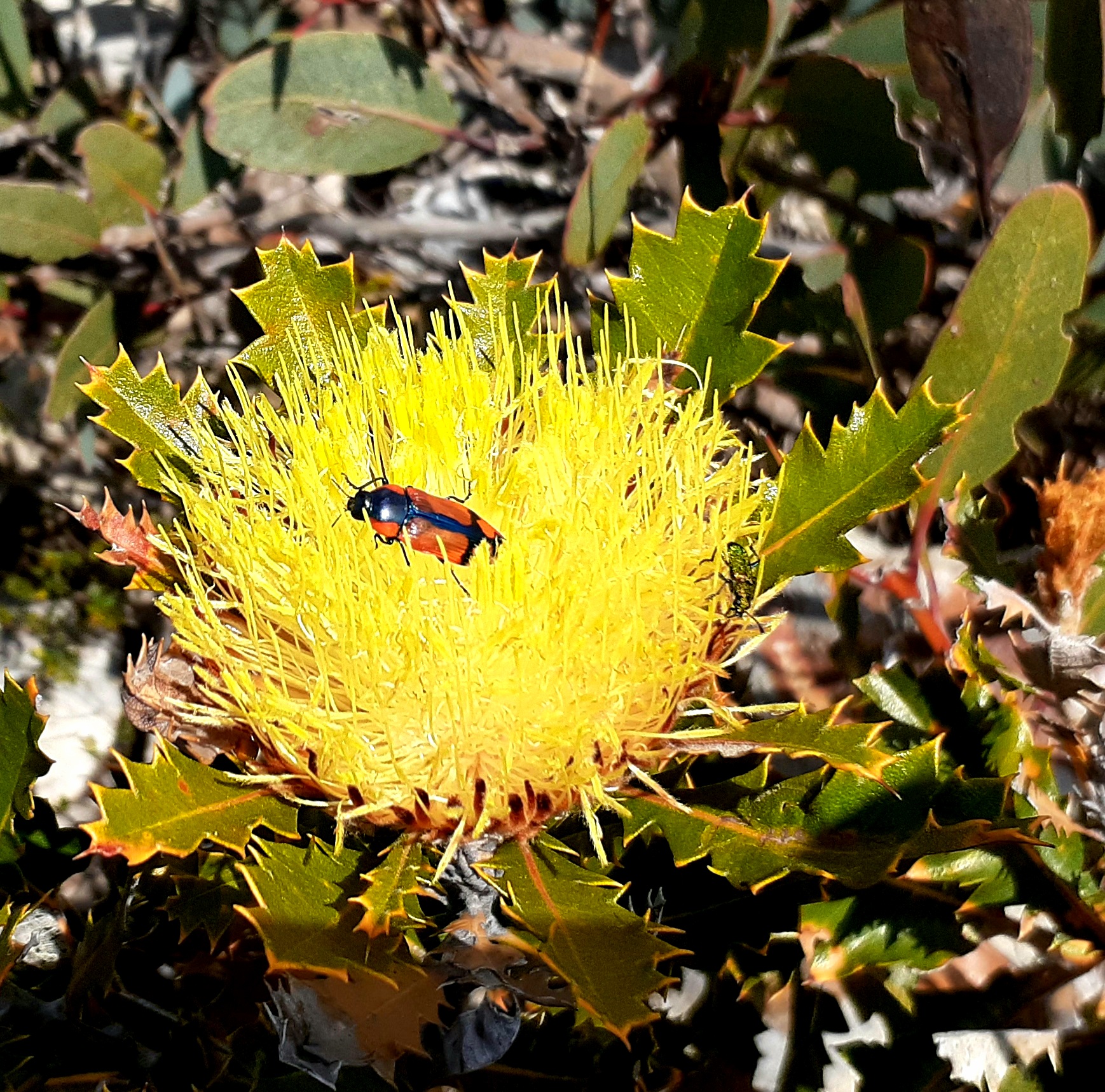 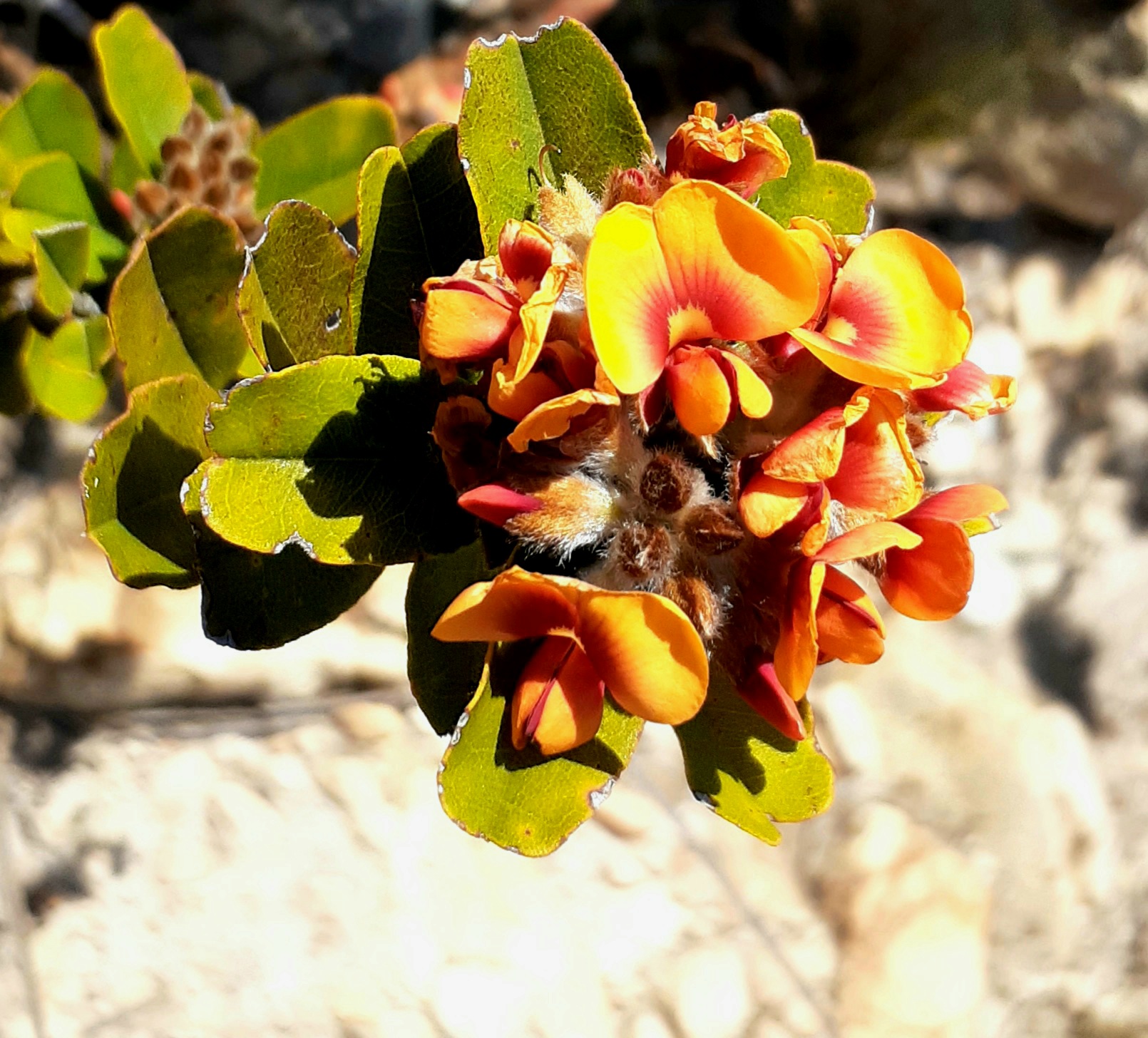 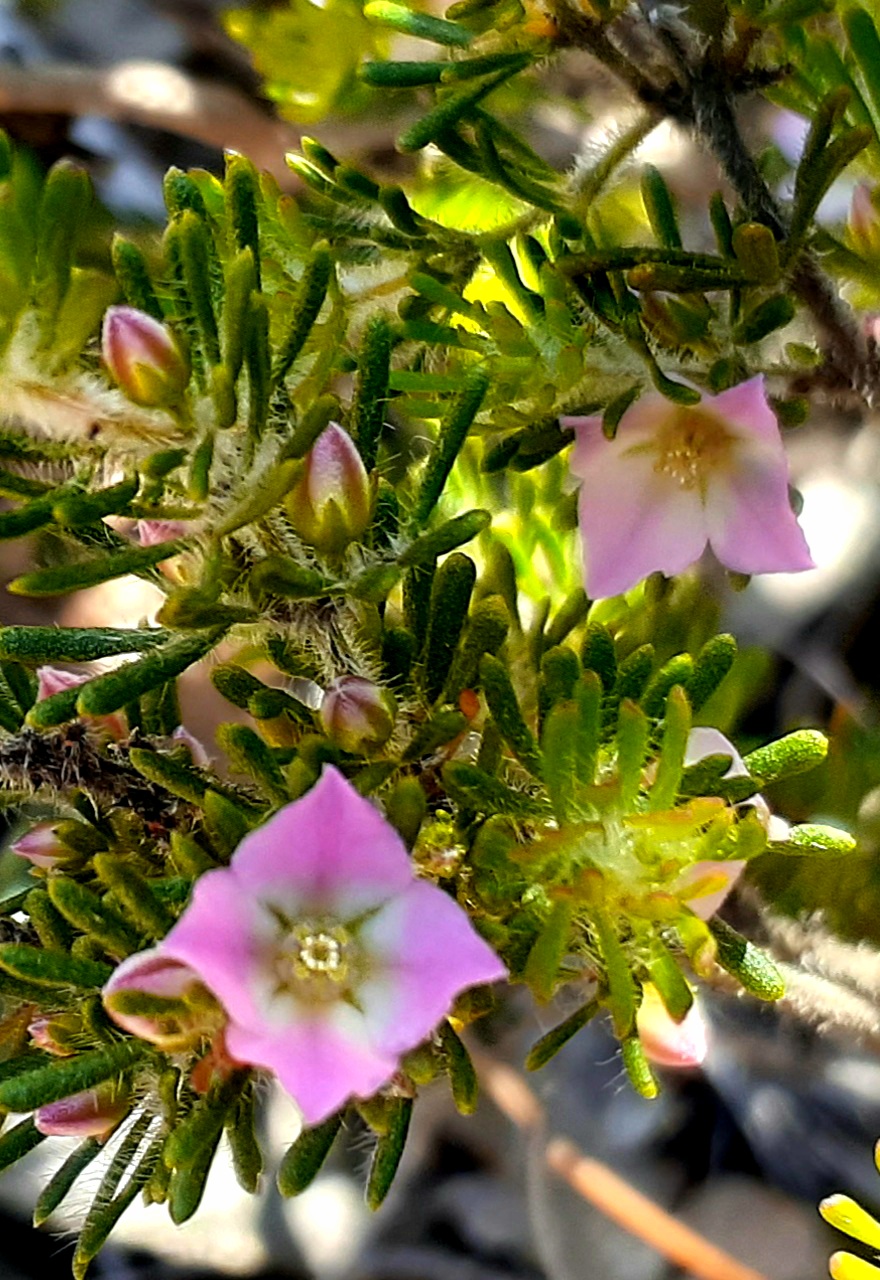 On reaching the summit the views are breathtaking. 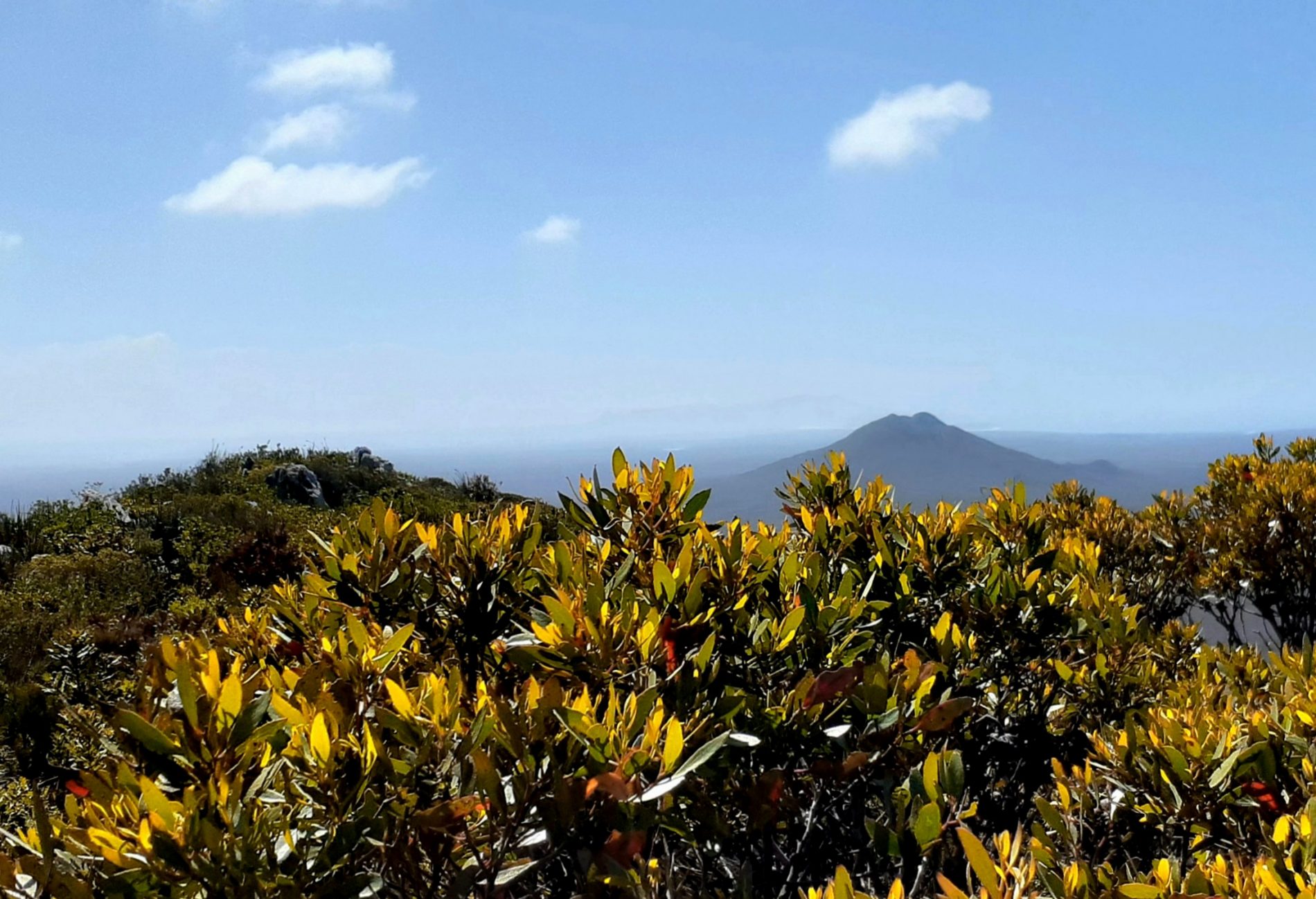 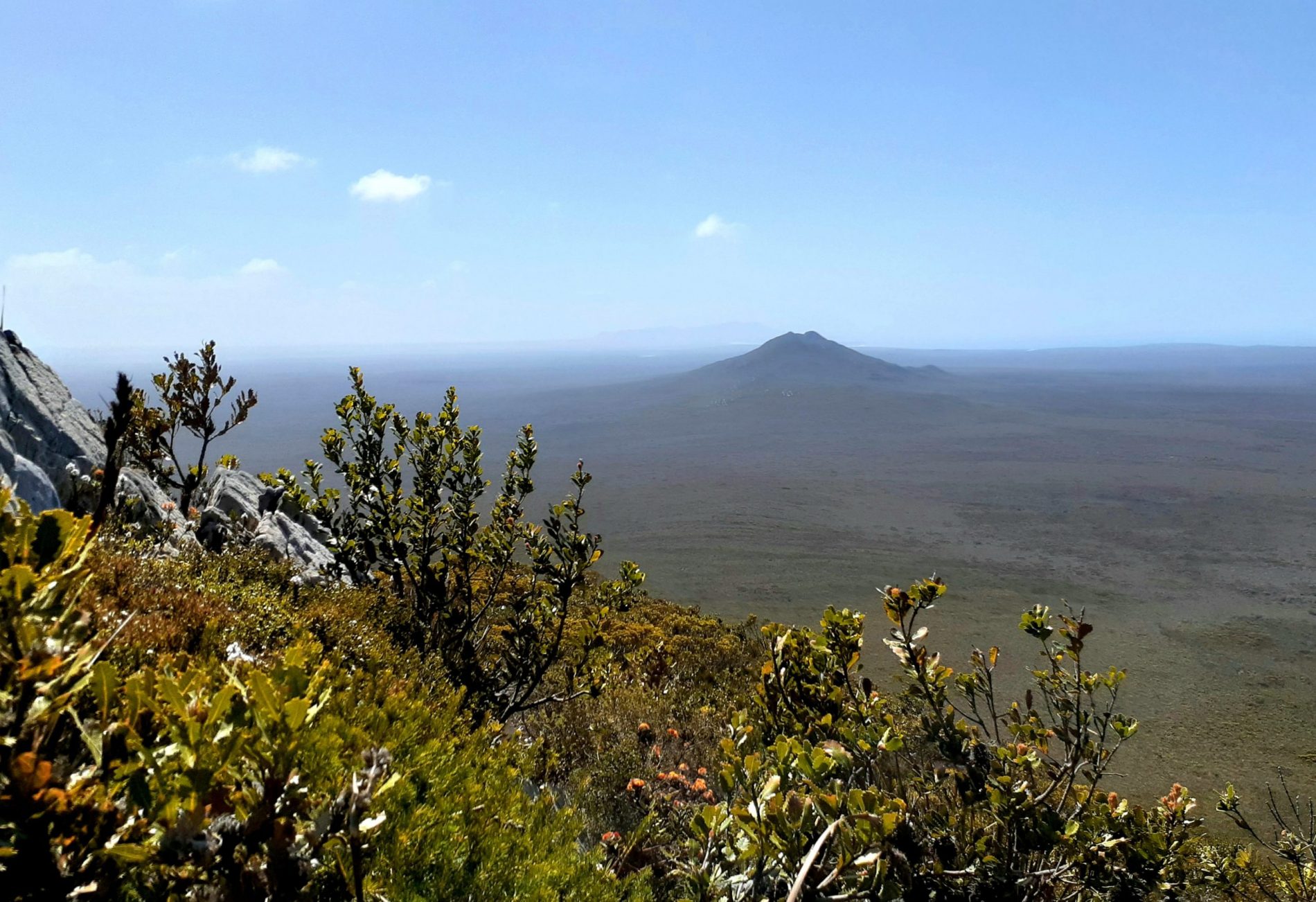 It is by no means a hard climb and with a reasonable level of fitness, and sturdy shoes, you will be fine. It’s well worth the slog!

Our base for the duration of this stay was at the fabulous campground situated at St Marys Inlet, by Point Anne, and reached by a gravel road (not recommended for caravans). 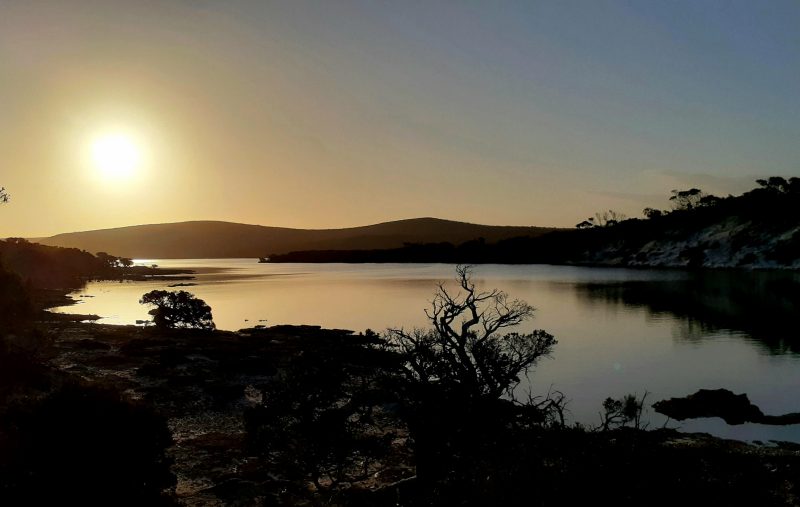 There are numerous walks from here and the beach. With the mountains as a backdrop, the pure white sand are stunning to stroll along. 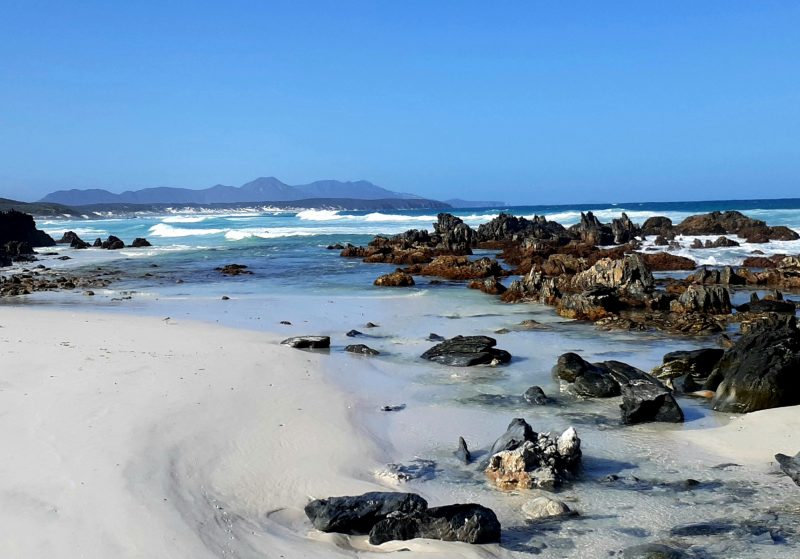 As if all the amazing wildflowers are not enough to gaze upon, St Marys is a great place to observe whales during Winter and Spring. We saw both southern right and humpback whales in the bay very close to shore, including a playful calf practising the art of jumping out of the water. Such a joy to witness!

There are very good viewing platforms placed along the Point Anne cliffs. 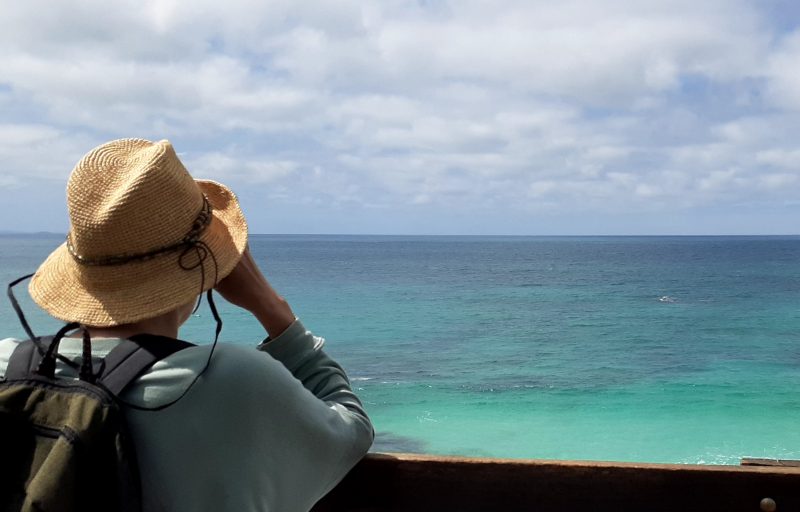 By the way, did you know the southern terminus of The No 2 Rabbit Proof Fence is in the Park? Right at Point Anne by St Marys inlet, in fact.

The No 2 Rabbit Proof Fence was constructed in 1905 to stop the influx of rabbits from the Eastern States. The Fence ran north from Point Ann for 1164km, passing the Wheatbelt town of Cunderdin, and joined the No 3 Fence north-east of Geraldton. The No 2 Fence required constant maintenance, which was carried out by boundary riders. The early Fence riders used camels, horses and bicycles to patrol their respective sections of fence, some of which were in excess of 150 kilometres. In 1960 the No 2 Fence ceased to be maintained by the boundary riders.

Here’s an old snap of the boundary rider with camels working on the No 1 Fence in the 1920s. 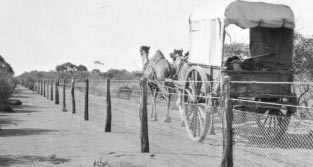 You can still see remains of the No 2 Fence today on the Point Ann heritage trail.

So, in conclusion, I highly recommend a visit to the wonderful Fitz, especially in the Spring.

For more information on visiting and camping in the Park look here.