You may often have seen the references to AAP when reading a story in print or online. There’s been a bit in the news about the end of the AAP era. Lots of finger pointing.

Here’s a very informative piece explaining where AAP came from, which we republish with the kind permission of Inside Story.  The original story can be found at https://insidestory.org.au/off-the-wire/

When the last reporter turns off the lights in the Australian Associated Press newsroom sometime in June this year, eighty-five years of service to the news media in this country will come to an end. The closure of AAP might not be a shock to many inside the organisation, but it will only reinforce some of the least desirable trends in the news industry over the past two decades.

As an unseen source of content for the Australian media, AAP has provided the Australian public with a significant portion of its news since the agency was created in 1935. Although it is little-known among many readers and viewers — it doesn’t have the profile of our prominent mastheads and broadcasters — the agency is highly valued by people working in the industry.

Indeed, any journalist working on daily news will tell you that copy “off the wire” — usually from AAP — is generally seen as trustworthy, having already been through selection and editorial processes. 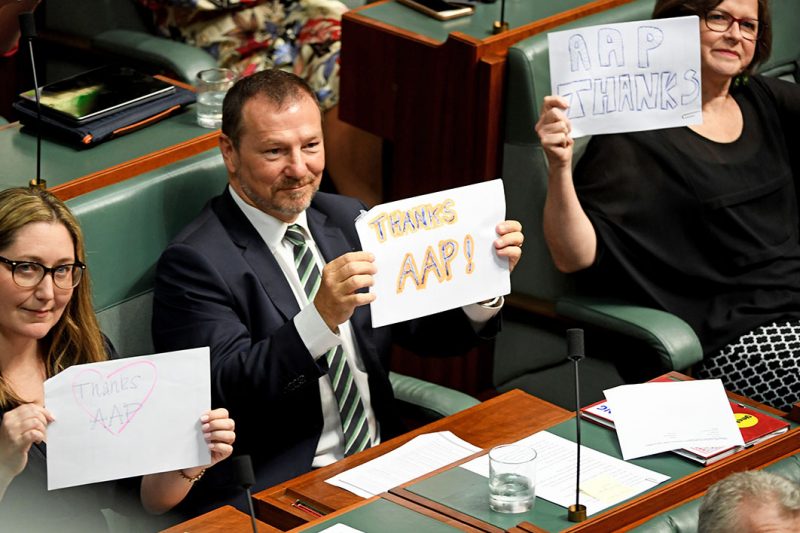 Silent partner: Labor MPs hold up “Thanks AAP” signs during question time in the House of Representatives on Tuesday. Tracey Nearmy/Getty Images

When my colleague Jane Johnston and I researched AAP in 2009, we found that journalists in the mainstream news media were struggling to fact-check public relations material and political speeches. Once they had AAP copy in their hands, though, they felt confident that the necessary legwork had (usually) been put into producing a straight, reliable piece of news.

“The basis of AAP is their brand — their credibility is in their brand and so you don’t necessarily question their copy,” one daily newspaper reporter told us in 2009. In a landscape of 24/7 coverage, AAP was out there covering the less glamorous press conferences, the local issues and the other stories the mainstream outlets couldn’t hope to cover.

We called AAP the “silent partner” of news organisations because it was the unseen source of news that journalists relied on, particularly in the relentless online environment. One Fairfax online journalist described the way AAP copy was often reproduced — sometimes carrying the AAP byline, other times with a journalist’s byline despite only the smallest of changes. “You know the term churnalism? Well that’s what churnalism is, getting the AAP story and just turning it around.”

As trainee journalists in the 1990s, we were warned against the “rip and read” culture of newsrooms — a reference to the tendency in radio newsrooms to rip stories straight off the wire and read them out on air. This was indeed poor journalism, but it had developed because of the trust radio journalists — and others — placed in any copy coming from the agency.

Established by Rupert Murdoch’s father Keith Murdoch, managing director of the Herald and Weekly Times, AAP’s original remit was to provide international news to fourteen Australian newspapers that had invested in the new “independent” news service. Its model was the US agency Associated Press, and its charter was to supply “the most accurate and most searching information of all the world’s activities and thought without any tendency toward or opportunity for the exercise of political partisanship or bias.”

In its early years, according to historian Prue Torney-Parlicki, about 85 per cent of AAP’s content emanated from London, 12 per cent from New York and 3 per cent from the rest of the world. Throughout the second world war, AAP content accounted for between a third and half of war coverage in Australian newspapers.

Following the war, and on the back of further widespread use and relevance of the wire service during the Vietnam war, the growth of regional media meant a rapid expansion for AAP, with a fivefold increase in staffing numbers between the mid 1970s and the mid 1990s. Despite the expansion, though, financial pressures meant that the agency needed to diversify beyond providing straight news content to paying subscribers among the mainstream media.

In the 1980s, AAP established MediaNet, which distributed press releases to journalists via a dedicated public relations wire. In 2002, AAP acquired Bruce Davidson’s Pagemasters service, a subediting and layout business that provided a full outsourcing option to newspapers. Newspaper companies began abolishing their own subeditors’ desks and sending copy to Pagemasters for final checking and production.

Fairfax embraced the opportunity, making redundant eighty editorial production staff across the Sydney Morning Herald, the Sun-Herald, the Age and the Sunday Age. For a time, AAP looked to be one of the winners in a new environment constrained by online competition. News businesses were expanding and diversifying, struggling to provide enough content to fill their online sites.

AAP was their answer. A near-endless stream of wire copy could fill the news sites even after most of the journalists had gone home. On an average day, the Guardian reports, the agency was providing more than 500 news stories, 750 images, and twenty videos to 200 subscribers, which included newspapers, radio, television and online news sites.

So, what went wrong for AAP?

In 2010, when the agency released its seventy-fifth anniversary book, On the Wire, longstanding editor-in-chief Tony Vermeer was optimistic about the new online environment. “People have often seen the web as an alternative news source,” said the man who was steering AAP through the early challenging years of the growth of the internet, “but in fact it is an alternative market for agency copy.”

Eight years later, AAP cut 10 per cent of its journalistic workforce in a move designed to ensure longer-term viability. Google and Facebook were blamed for having “cannibalised” the agency’s content.

The AAP executives who this week announced the agency’s closure — chief executive Bruce Davidson and editor-in-chief Tony Gillies — said that Google and Facebook played a major role in AAP’s demise, just as they have in the breakdown of the traditional financial model for news media. The availability of free news content and the dominance of the two giants in the online advertising market have undermined news organisations to the point that they are not only laying off journalists but can no longer afford a wire service subscription fee.

The closure of AAP has been hurried along by the merger between Nine Entertainment and Fairfax, which drove a quest for savings. But information from AAP insiders, reported by the Guardian, suggests that the agency’s biggest shareholders, Nine and News Corp, who together own close to 90 per cent of the wire service, were partly motivated by their sense that they are subsidising rival media companies more heavily reliant on AAP services.

“The New Daily and its associated titles, the ex-Fairfax regional papers controlled by Antony Catalano and the Australian branch of the UK Daily Mail all subscribe to AAP and make heavy use of articles it supplies,” reported the Guardian. “Guardian Australia is also a subscriber and is particularly reliant on AAP’s photographic archive.”

To fill part of the gap left by AAP’s closure — and to re-employ some of the redundant AAP journalists — an estimated twenty to thirty jobs appear likely to be created at Nine and News Corp. But this will go nowhere near replacing the jobs of around 180 journalists, 100 photographers, and another 300 employees handling sports results, finance, administration and human resources.

Among these staff, importantly, are five journalists fact-checking Facebook content on behalf of the technology giant’s Australia operation — a job it shares with fellow news agency Agence France-Presse. This service is expected to be sold.

The Media Entertainment and Arts Alliance, the representative body for journalists and media workers, has criticised Nine and News Corp for the decision to close. But it lays most of the blame on government policymakers for failing to tackle the dominance of Google and Facebook.

The closure is undoubtedly bad news for media diversity and the health of Australian democracy. More than a quarter — in fact, closer to a third — of Australia’s journalistic workforce has been lost to redundancies and closures since 2012. When the lights go off for the last time in AAP offices around the country, it will be just the latest in a string of cuts — a thousand cuts — to Australian journalism.

Written by Susan Forde. The original story can be found at https://insidestory.org.au/off-the-wire/