The Army Museum of Western Australia in Fremantle is packed with exhibits and memorabilia.

It’s something of a well kept secret.

The exhibits take visitors through a rich historical story of West Australians in the Australian Army from early colonial times and conflicts, from the Boer War (1899) to the present day: World Wars 1 & 2, Korea, Malaya, Vietnam, Afghanistan, along with the hardship of prisoners of war and the challenges of peacekeeping activities. Many of the exhibits are not always apparent when visiting the museum for a short visit.

To mark International Women’s Day (IWD)during March this year, the Museum created a special event focusing on the unique contributions made by women during wartime. The IWD theme this year was #BreaktheBias – embracing a gender-equal world and a world free of bias, stereotypes and discrimination.

Stephen Sinclair, one of the Museum’s Curators, took a group of us on a guided tour. We visited 22 sites throughout the galleries highlighting women during wartime, their lives and wartime efforts.

Queen Victoria reigned from 1837 to 1901. Her images and iconography can be found throughout the Pre-1914 Gallery.

Queen Victoria instituted The Royal Red Cross, which is a military decoration awarded in the United Kingdom and Commonwealth for exceptional services in military nursing. The medal was awarded for zeal and devotion providing for, and nursing sick and wounded sailors, soldiers and others with the army in the field, on board ship or in hospital. 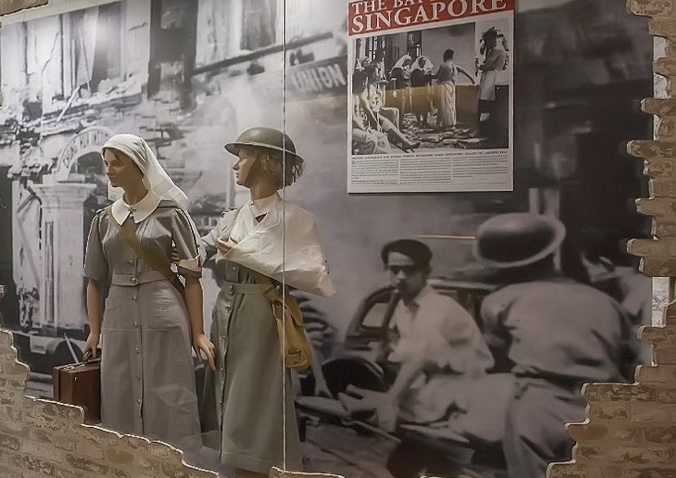 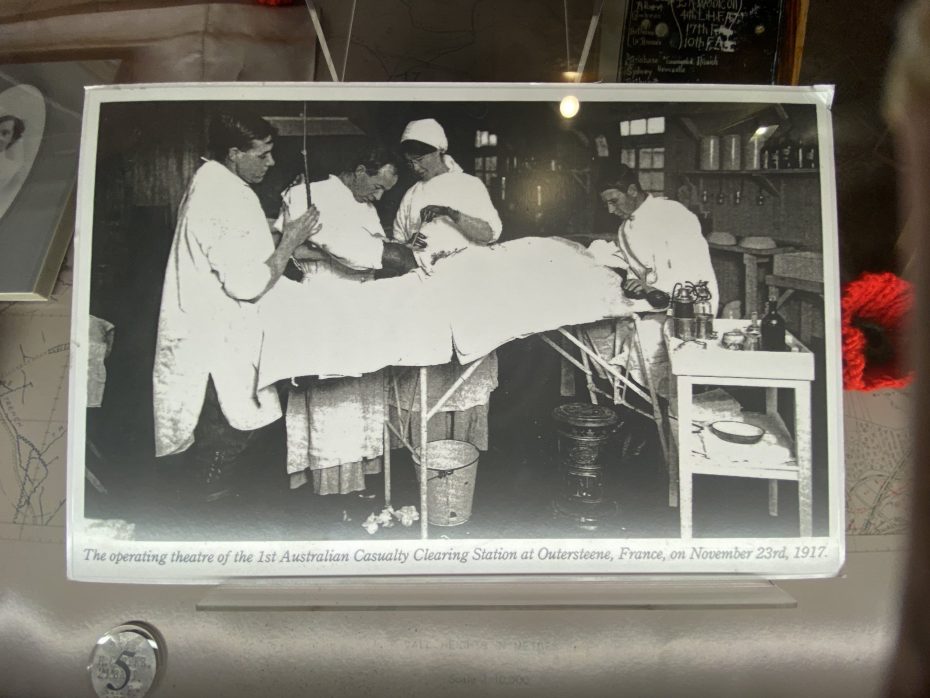 The Royal Red Cross was first presented to Florence Nightingale, an English nurse, the founder of modern nursing who served in the Crimean war.

In the Hall of Valour, you’ll find a display of Victoria Cross medals, and citations for bravery for which the Victoria Cross was awarded. Reading the personal circumstances of the recipients before and after the war is very moving and calls to mind the mothers, daughters and wives of these men.

Here’s a selection of the medals you will find in the Museum. 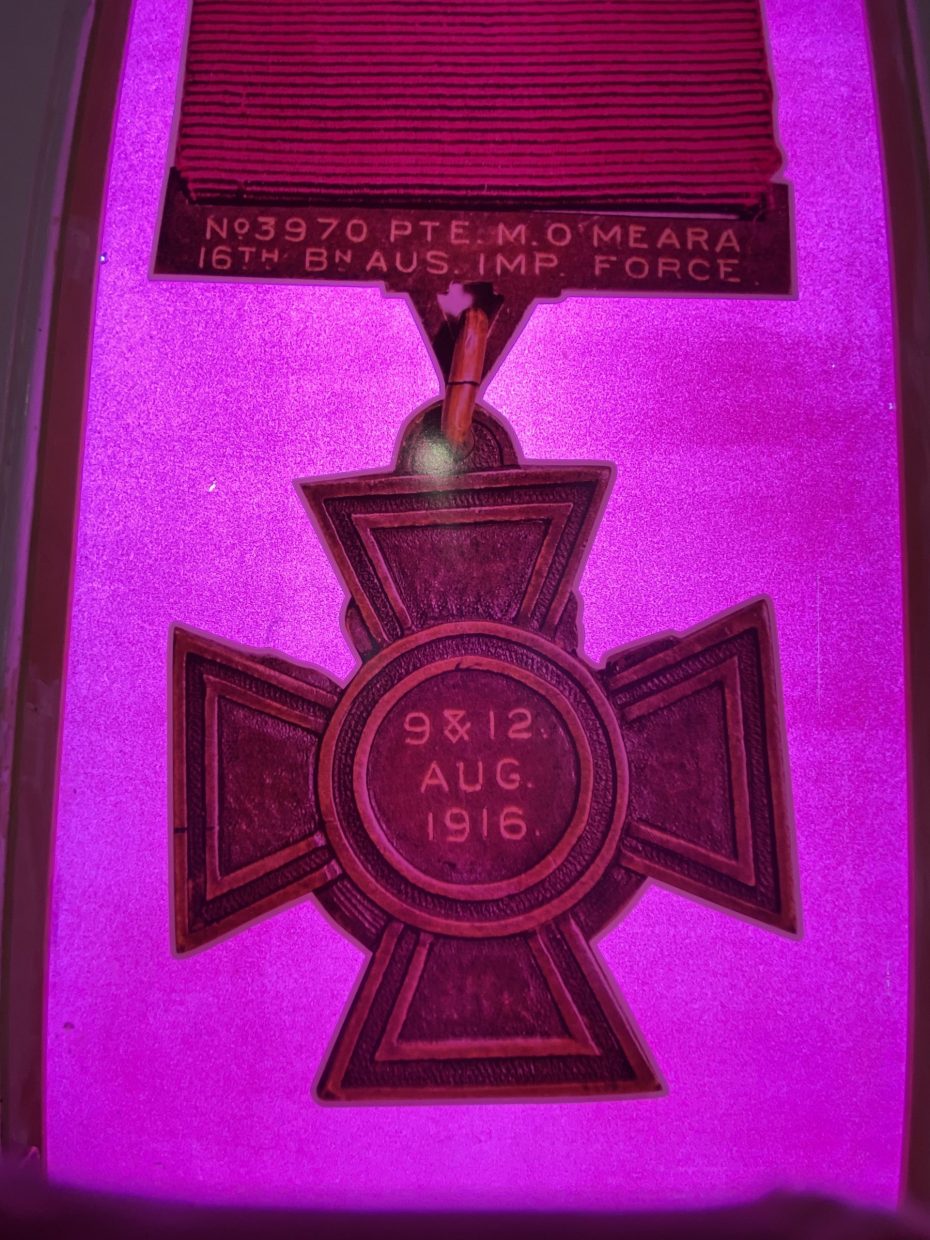 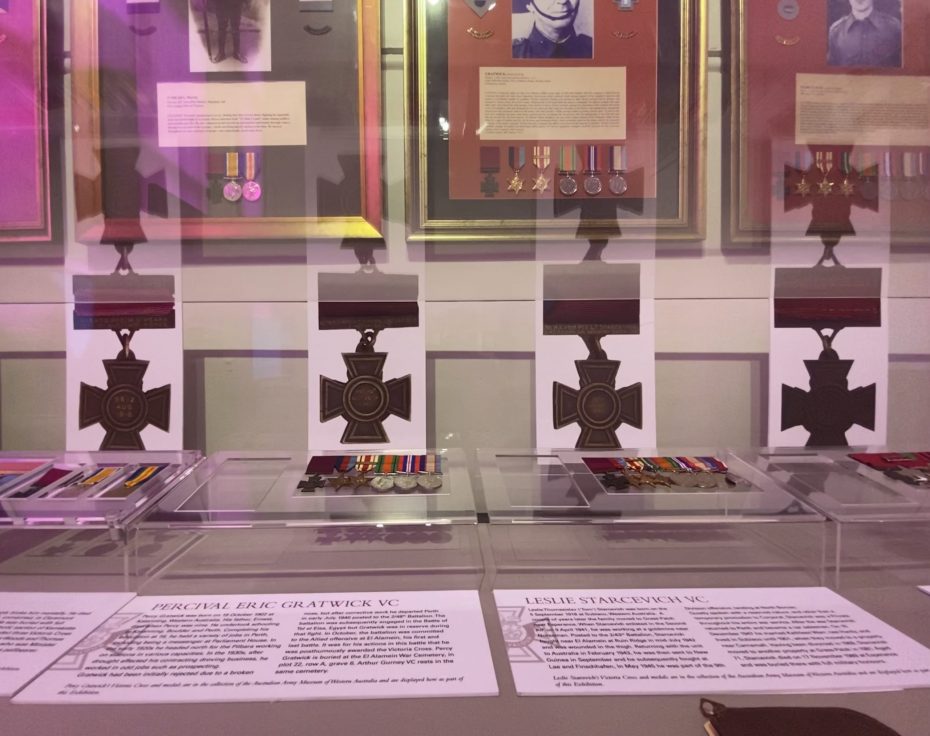 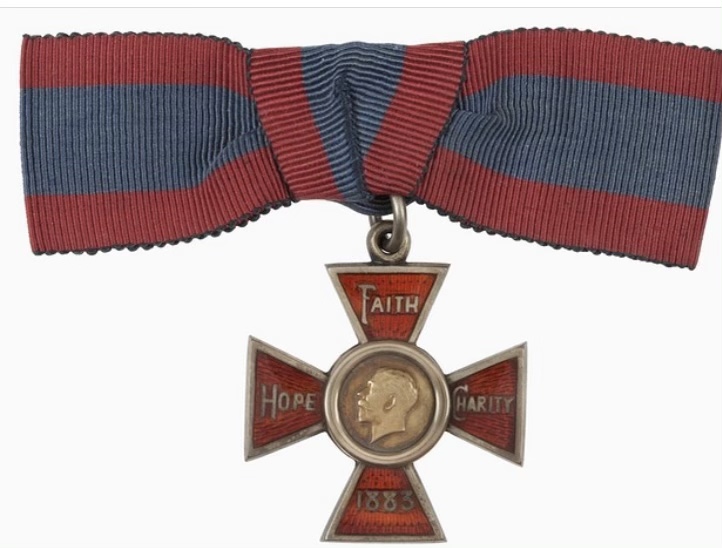 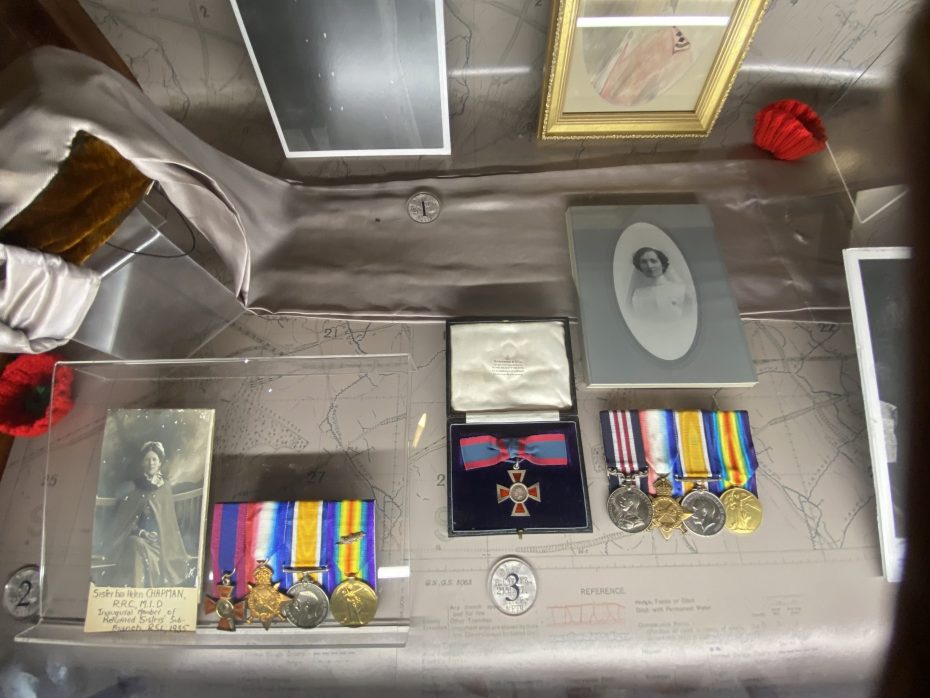 In 1904, wealthy wives created ball gowns patterned to match their husband’s uniforms. Less wealthy women worked as armaments workers producing artillery shells and other munitions at the WAGR Workshops during both World Wars.

Nurses are honoured throughout the galleries. Sister Alicia Kelly (1874-1942) was awarded the Red Cross, after serving in Egypt and treating thousands of injured from the Gallipoli landing. She was then posted to France to a Casualty Clearing Station. She was one of the seven Australian Nurses to be awarded the Military Medal. Her nickname was ‘Loll’ and she is buried in Karrakatta cemetery.

On 16 Febuary 1942, twenty-one Australian Nurses from the Australian Army Nursing Service (AANS), were murdered in the Banka Island Massacre in Indonesia. After surrendering, the nurses were ordered to walk into the sea at Radji Beach and machine gunned from behind. All except Sister Bullwinkel were killed. Of the 65 servicewomen who embarked on the Vyner Brooke, only 24 survived and returned to Australia.

‘Where the men are fighting, there are always nurses.’ Hundreds of nurses worked in hospitals and casualty clearing stations with the allied offensive serving in Bougainville, Jacquinot Bay, Morotai, Labaun and Balikpapan.

The museum has a large collection of Dead Man’s Pennies. The next of kin of soldiers, sailors and nurses who died while serving during World War 1, received a commemorative bronze medallion. The deceased person’s name is inscribed on the medallion, which bore no rank, showing equality in their service. 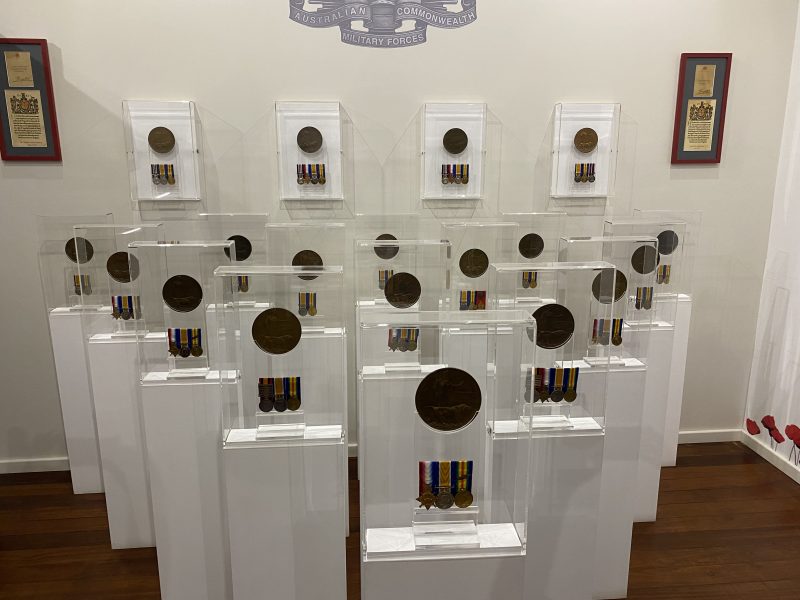 A shortage of male recruits during World War 11, forced the military to establish female branches in 1941/42. The RAAF established the Women’s Auxiliary Australian Air force (WAAAF) and the Women’s Army Service (AWAS), and later the WRANS – the Women’s Royal Australian Service. 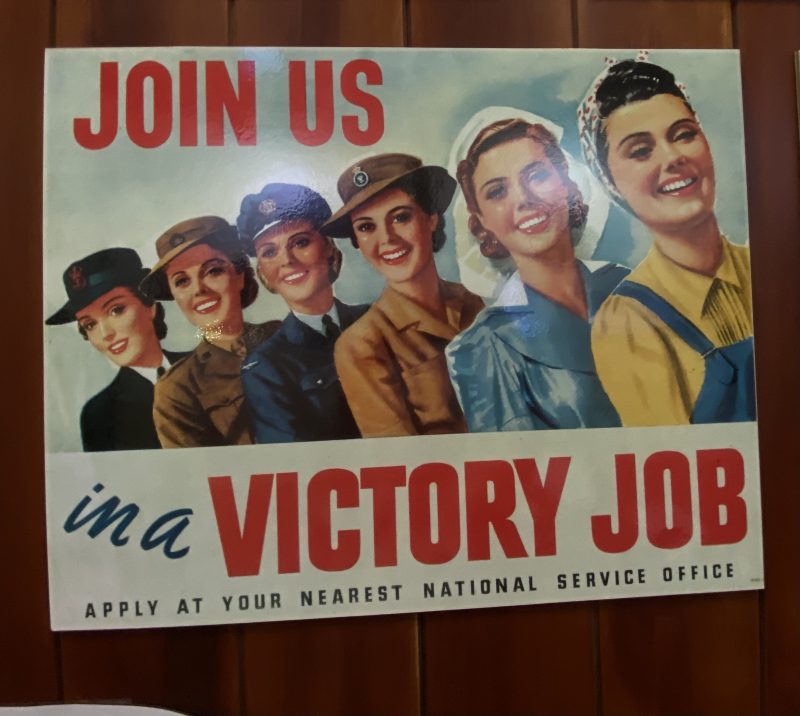 The Museum has four mannequins displaying uniforms of women’s services and a wedding dress made of parachute silk. By 1944, almost 50,000 women were serving in the military and thousands more joined the AWLA – Australian Women’s Land Army. These were trail-blazing young women who went to work on farms across Australia to fill gaps left behind by men sent to war.

During the course of the war, more than 3,000 women volunteered. Most ‘Land Girls’ were from urban areas, some as young as 16. They were sent to farms all over Australia. Sadly, the Land Girls were only permitted to take part in the Anzac Day March for the first time in 1985 – 40 years later.

Post-1945 – we learned about the 600 Japanese War Brides who migrated to Australia after WW2 as the wives and fiancées of Australian servicemen. The Australian Government finally lifted a ban on their entry in 1952. Their story is one of courage and strength, journeying across the sea to begin a new life in Australia.

As peacekeeping has evolved, servicewomen have become increasingly part of the peacekeeping family, supporting the role of women in building peace and protecting women’s rights.

In today’s Australian Defence Force (ADF) women work in over 200 roles, and receive the same training, salaries and opportunities as men. Women currently make up 19.2% of the ADF workforce. In 1990, women were allowed to serve on warships. By 2015, 335 women participated in overseas operations. 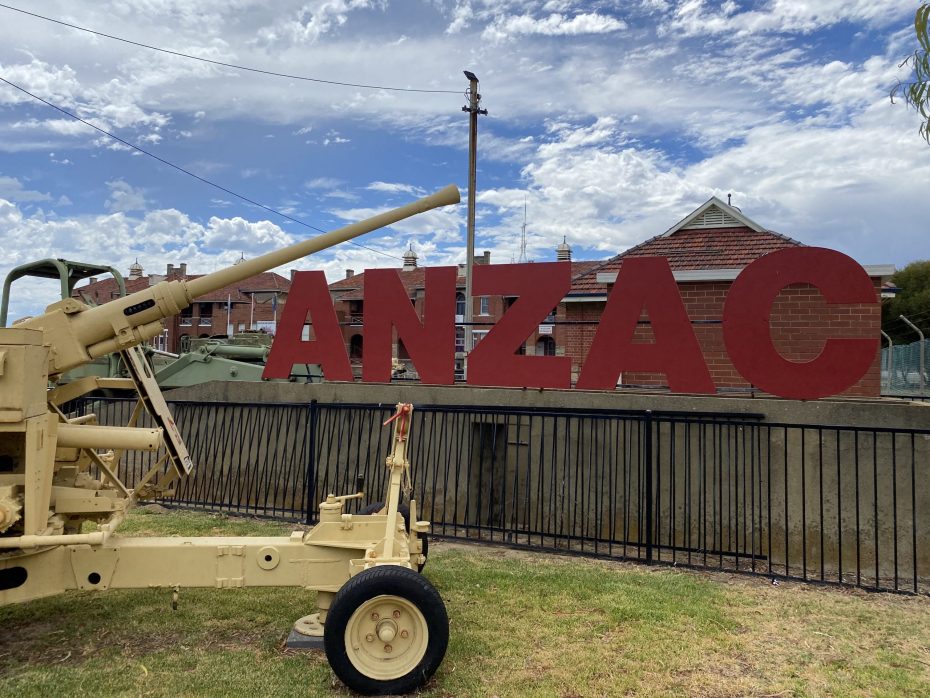 Take a trip to The Army Museum of Western Australia soon, it is well worth a visit. Look out for those brave nurses and women who served and those who continue to serve in our armed forces.