Freo’s High Street ‘Upgrade’ – What Do You Think?

Main Roads WA’s controversial Fremantle ‘High Street Upgrade’ project is nearing completion – at a cost of $118 million, $28.6 million contributed by WA and $47.4 million by the Commonwealth.

If you drive or walk around the project area just now you will be confronted by mega walls, walls plainly designed to keep the visual and noise pollution away from the folk living in the nearby Fremantle residential neighbourhoods. 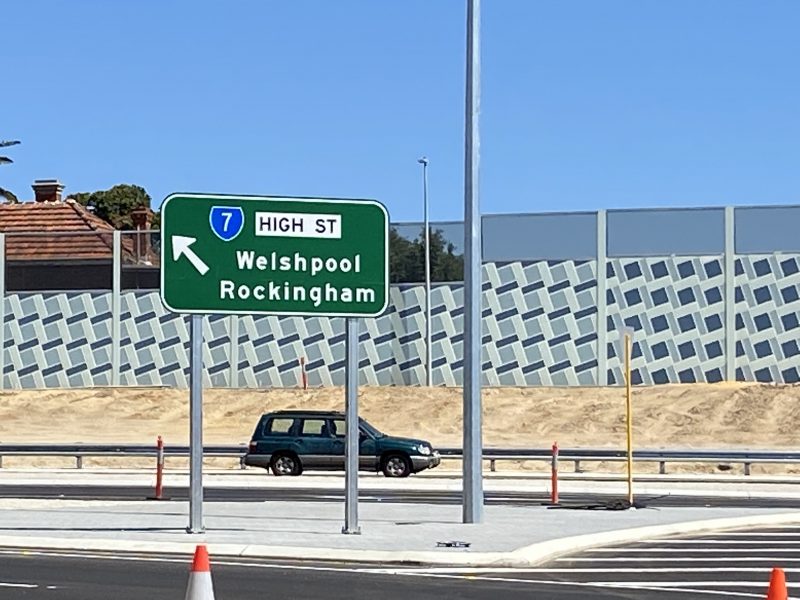 The walls by themselves are something of an assault on the senses, ameliorated to an extent by the interesting colour patterns on some of them.

A giant net on the High Street southern frontage to the Fremantle Public Golf Course has to be seen to be believed. It will no doubt present a wonderful challenge to golfers expert and not so in trying to get a little white ball over the top!

While the upgrade is intended to facilitate the passage of container truck traffic to the northside of the port, via Stirling Highway and Tydeman Street, North Fremantle, it was initially sold to the public by Main Roads as a means of dealing with significant traffic congestion.

Here’s what They said –

‘Currently, High Street between Stirling Highway and Carrington Street is experiencing significant traffic congestion. There is also a high crash rate along this 1.5 km route and heightened safety risks for both road users and pedestrians.

‘This project hopes to address these issues and improve the general flow of traffic for everyone travelling in and out of Fremantle.’

No mention was made of the fact that the congestions was due, if not wholly then mostly, to the trucks heading to the port. And the position, one fears, will remain much the same after the upgrade. There are only two lanes on High Street and at the roundabout and trucks travelling west along High Street will necessarily have to slow down when taking the roundabout to turn into Stirling Highway.

‘The improved design will reduce crash risk at the intersection of Leach Highway (High Street) and Stirling Highway, and will provide more reliable access to Fremantle Inner Harbour.’

The initial Mains Roads design got everyone around Freo hopping mad. If you are a little aghast at what we now have, what was originally of offer was utterly incongruous. Something like a portion of a Los Angeles 1960s freeway. Concrete, treeless, alien.

After a strong community and City of Freo negative reaction Main Roads were sent back to the drawing board to produce a new design concept, which they did. It is what we now see nearing completion. The upgrade is now designed to –

As part of the upgrade, there are now 1.5 kilometres of tiled noise walls – some with netting on the top. They were constructed in accordance with environmental conditions set by the Environmental Protection Authority. Whether they’ll satisfactorily mitigate the noise in the residential areas adjacent to the traffic, remains to be seen.

However, on the plus side, the walls have presented an opportunity, as public relations consultants would express it, to highlight the High Street and Stirling Highway gateway to Fremantle.

The artwork chosen is closely connected with Fremantle’s art history, and has been supervised by Penny Bovell, a long-time Fremantle artist who was selected as the public artist for the project.

Sicilian immigrants Guiseppe and Anna Scolaro opened the Universal Terrazzo Tile Factory in 1950, just a year after settling in Fremantle. The factory was located on Blinco Street. During this time, the family produced a distinctive tile design, merging organic properties of materials from local quarries – stone, coloured pigment and cement, with excellent craftsmanship. The family used a distinctive style of repeated geometries to create continuity and diversity.

The Scolaro tile designs are known to feature in dozens of homes throughout the Fremantle area, however their designs remain a largely undocumented Fremantle story.

The Terrazzo theme features on the underpass portals, as seen here. 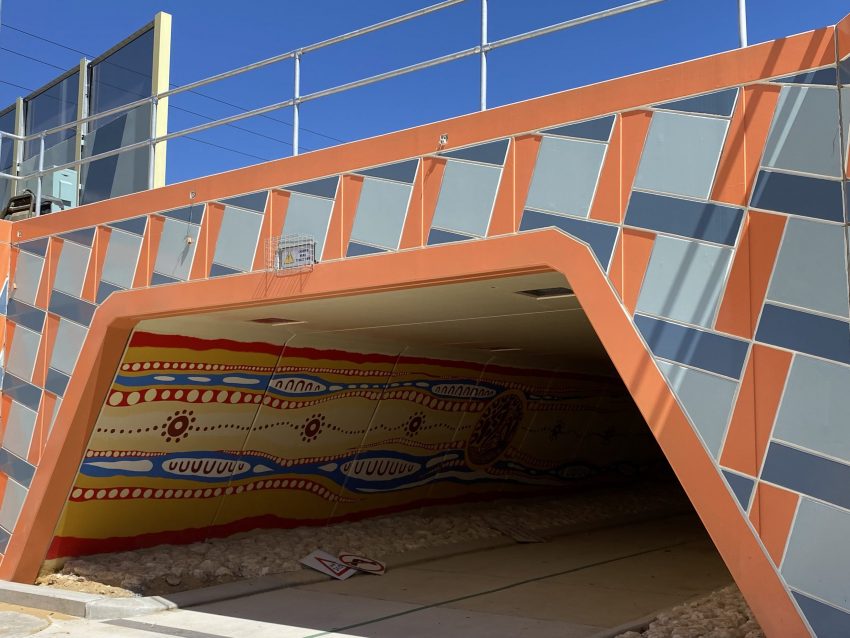 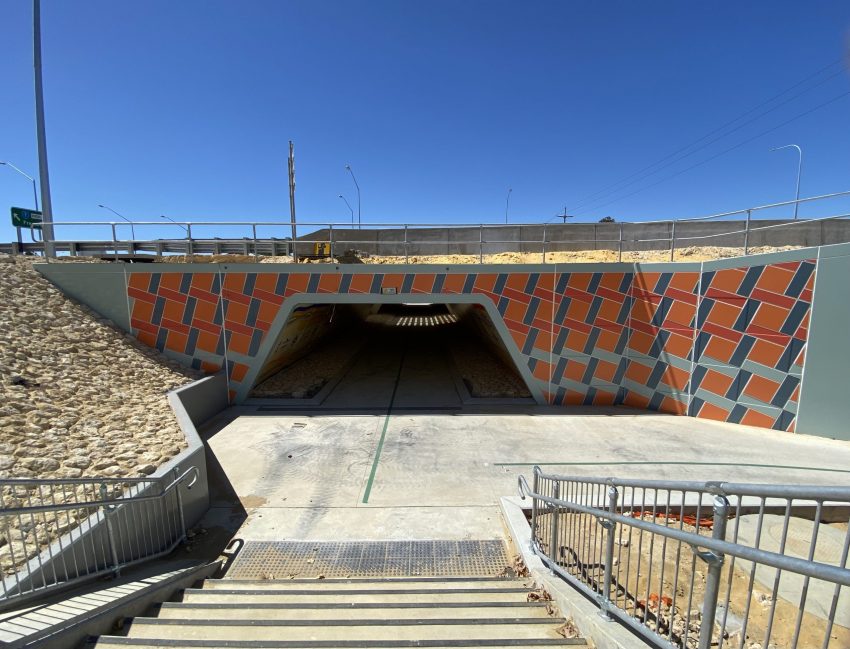 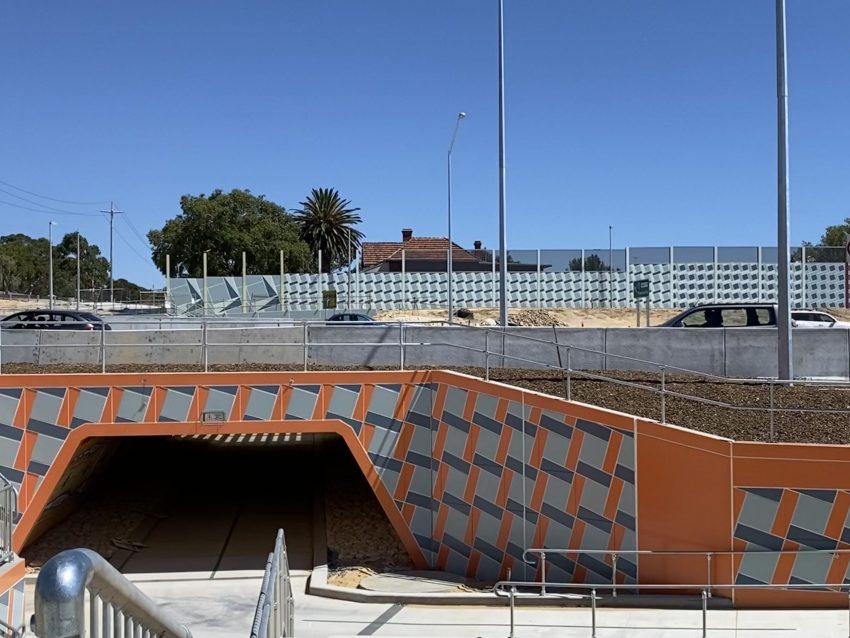 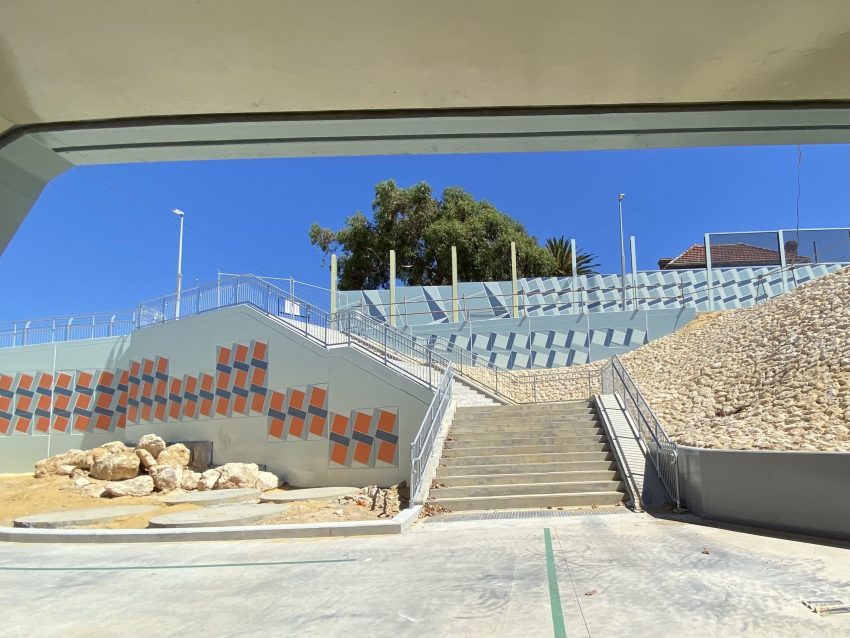 Local Noongar artists Peter Farmer and Kayley Emery have designed and painted the interior of both the Montreal Street and Forrest Street underpasses. Their public artwork is stunning. It’s a shame though it can’t be seen by passing motorists. And won’t be seen by any of us until the underpasses are officially open. But here’s a sneak peek! 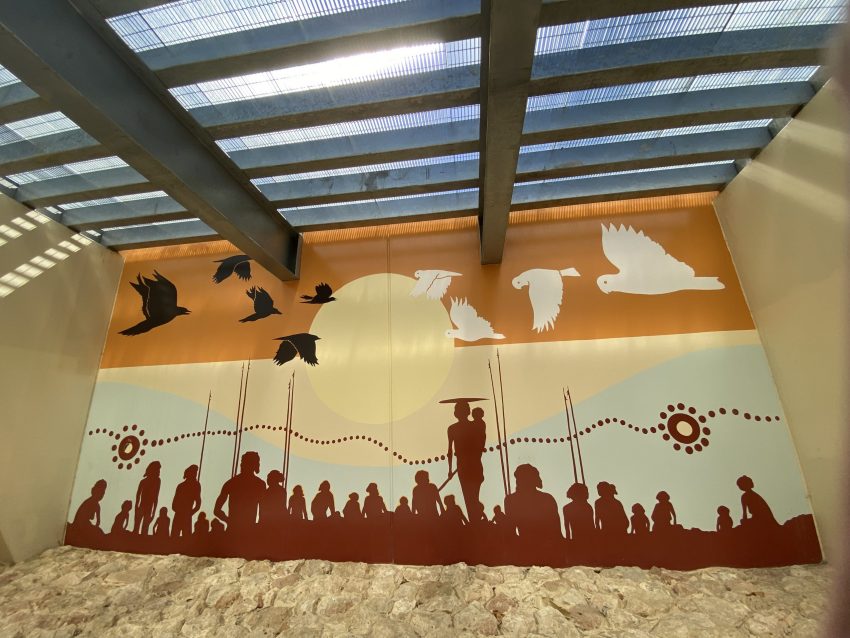 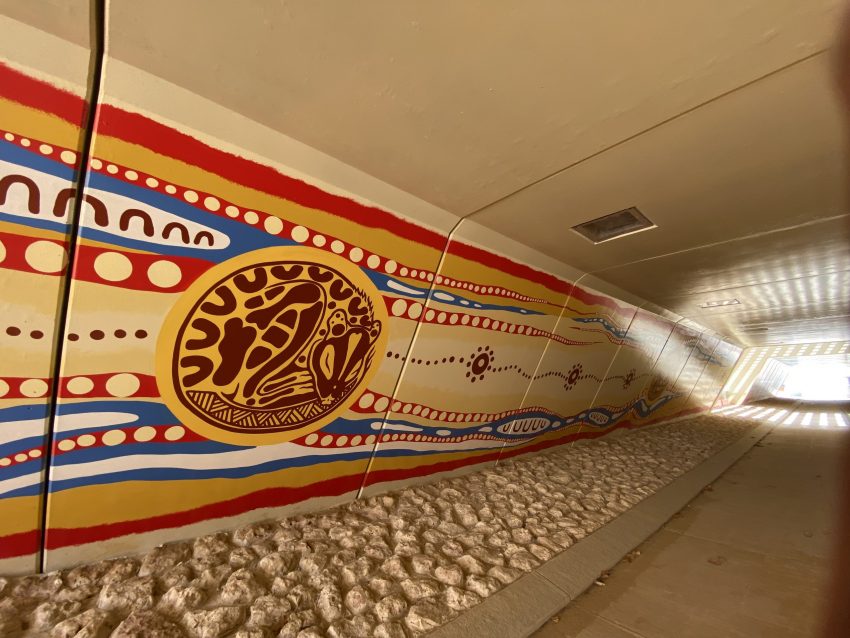 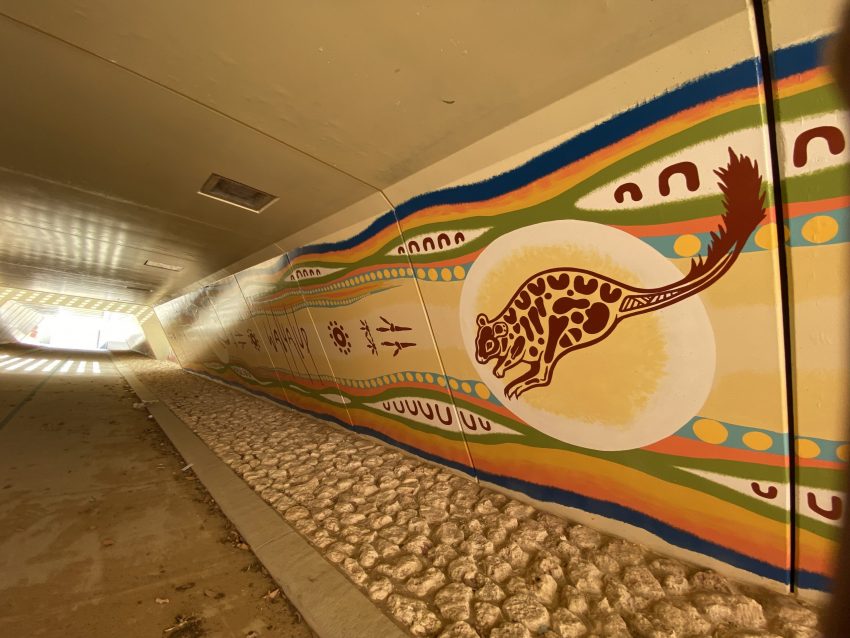 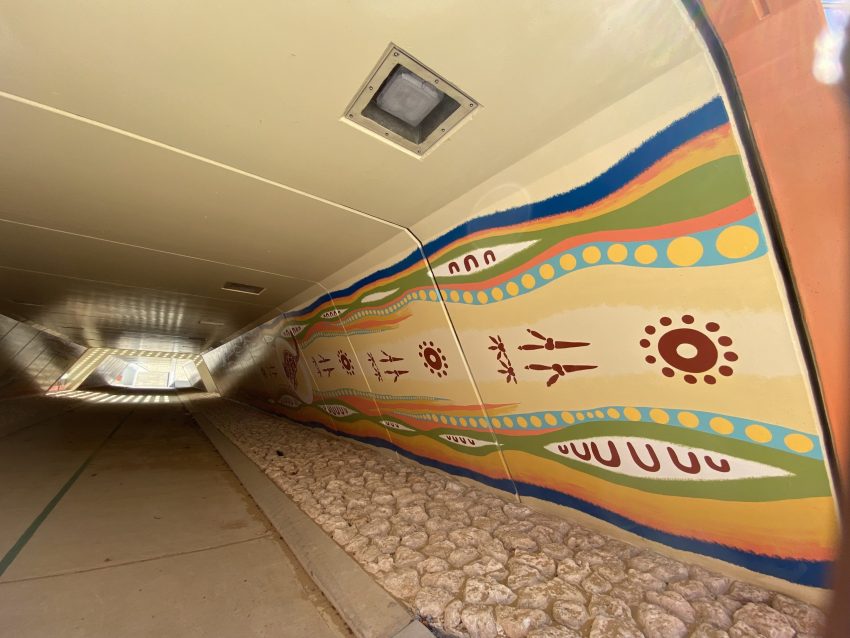 Sadly, apart from the retained trees in the median along High Street from the roundabout to the Royal Fremantle Golf Club entrance of High Street, there are no other trees or greenery of note, just kilometres of walls .

No doubt we will all form our final impressions once the upgrade is fully finished. Perhaps we will grow to love it…

In the meantime, here’s a gallery with some more pics showing things as you’ll find them just now. 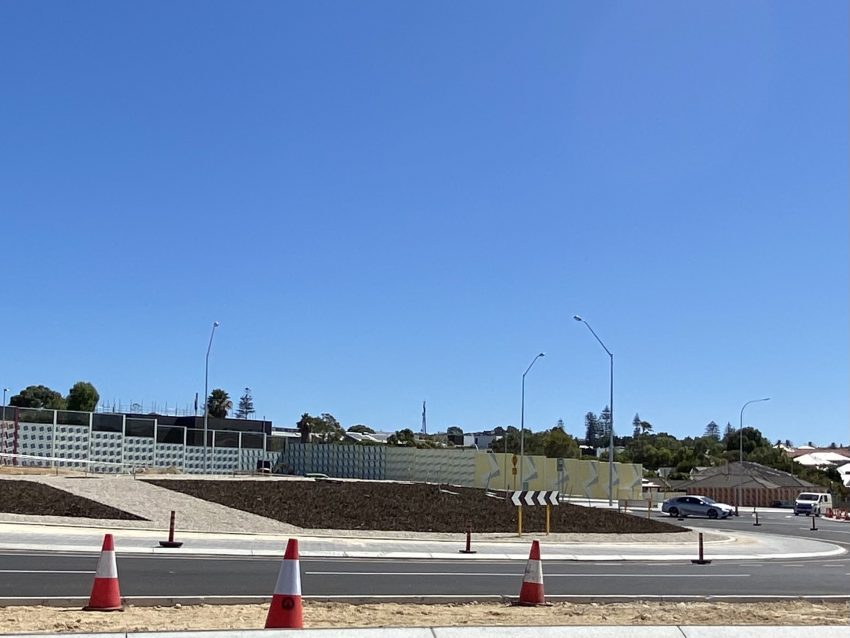 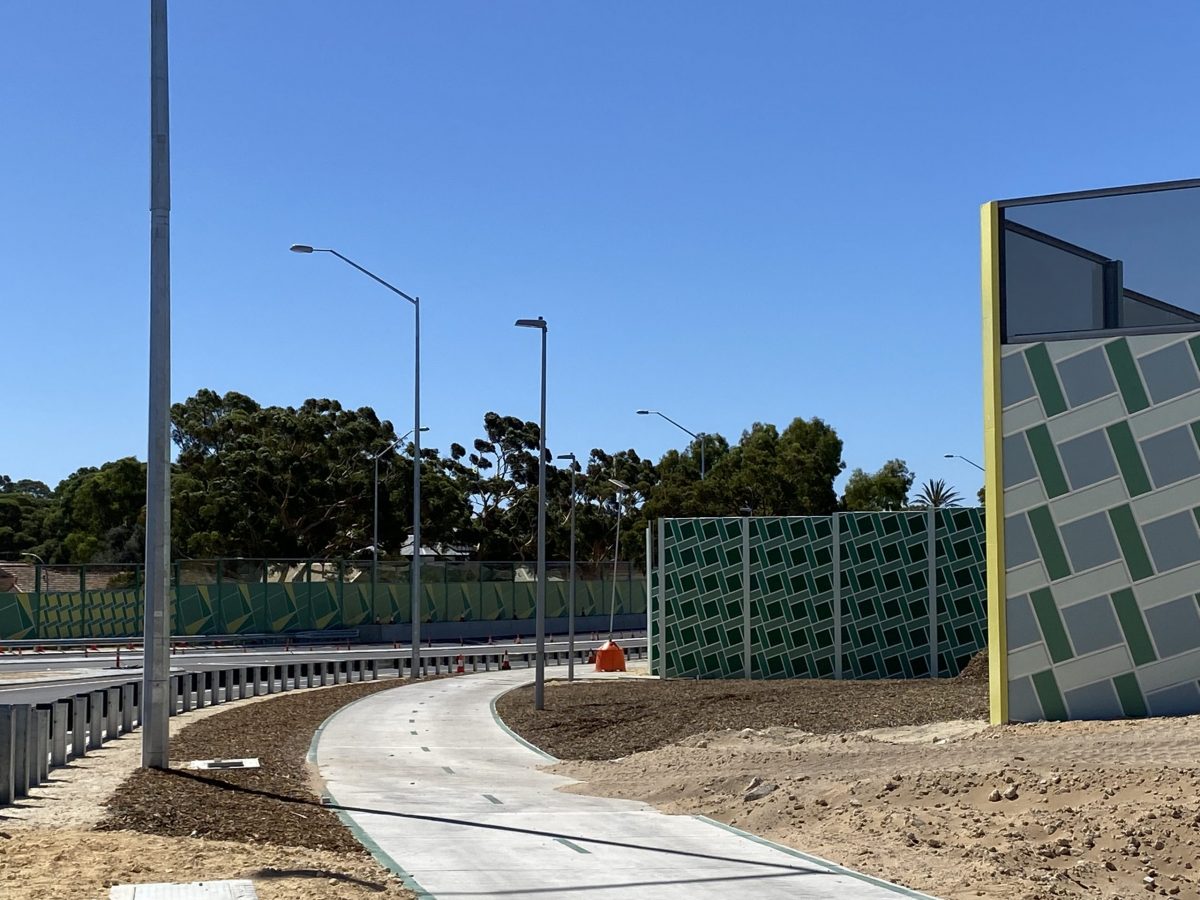 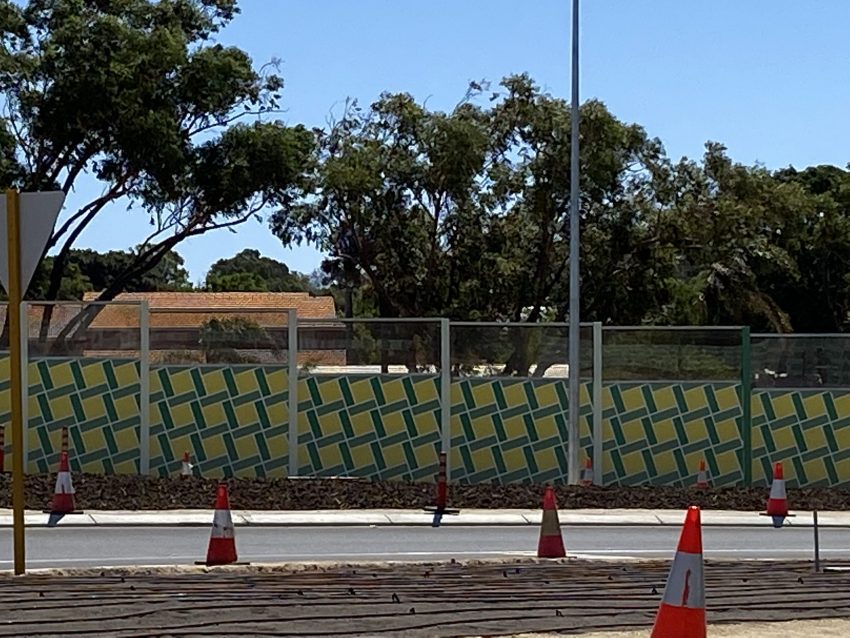 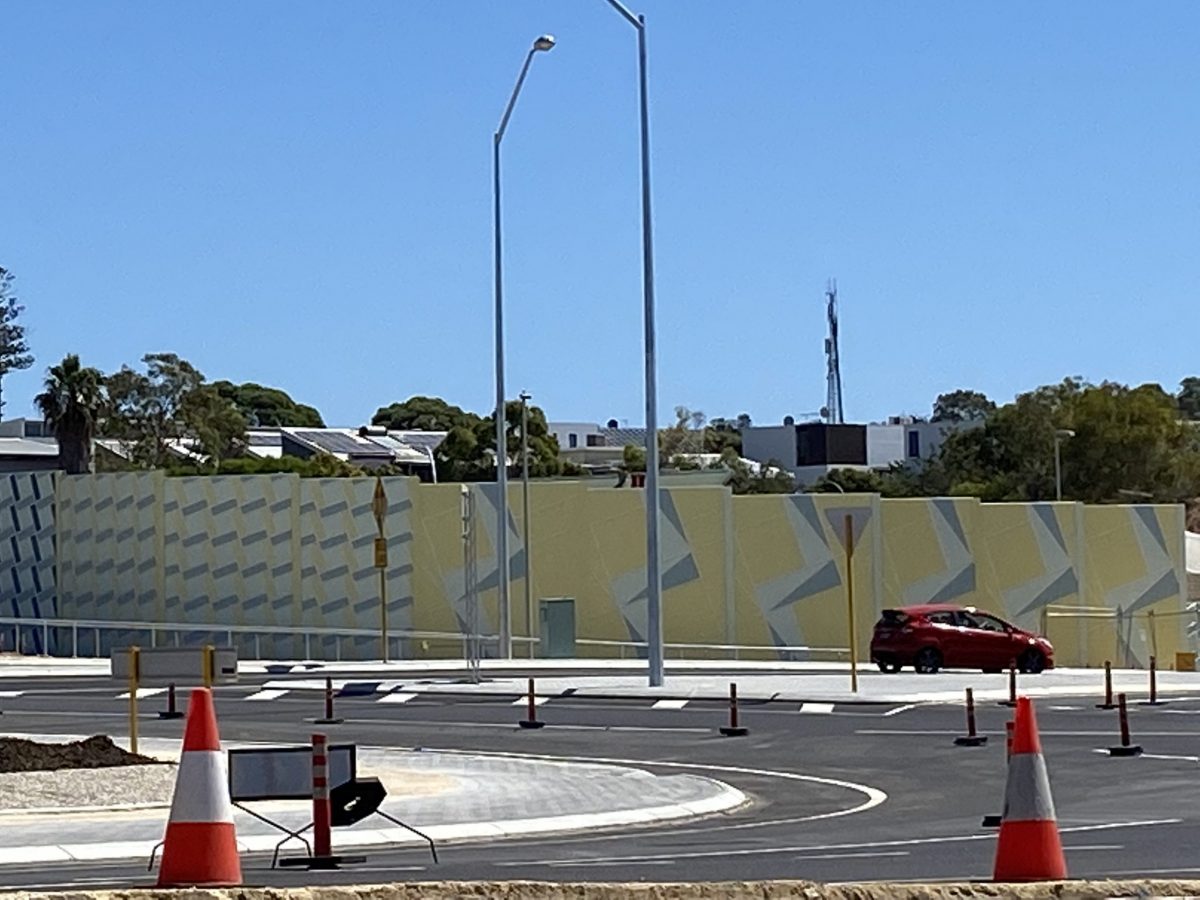 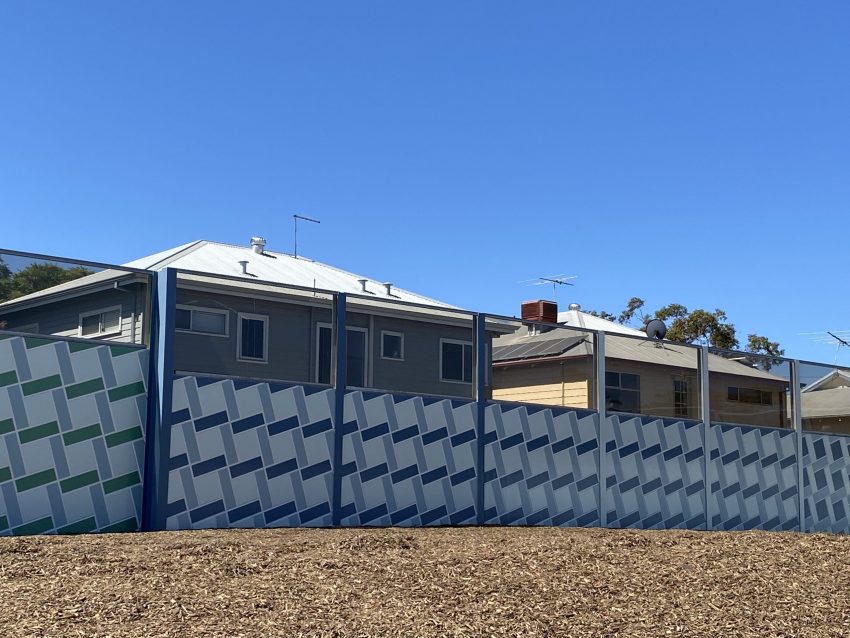 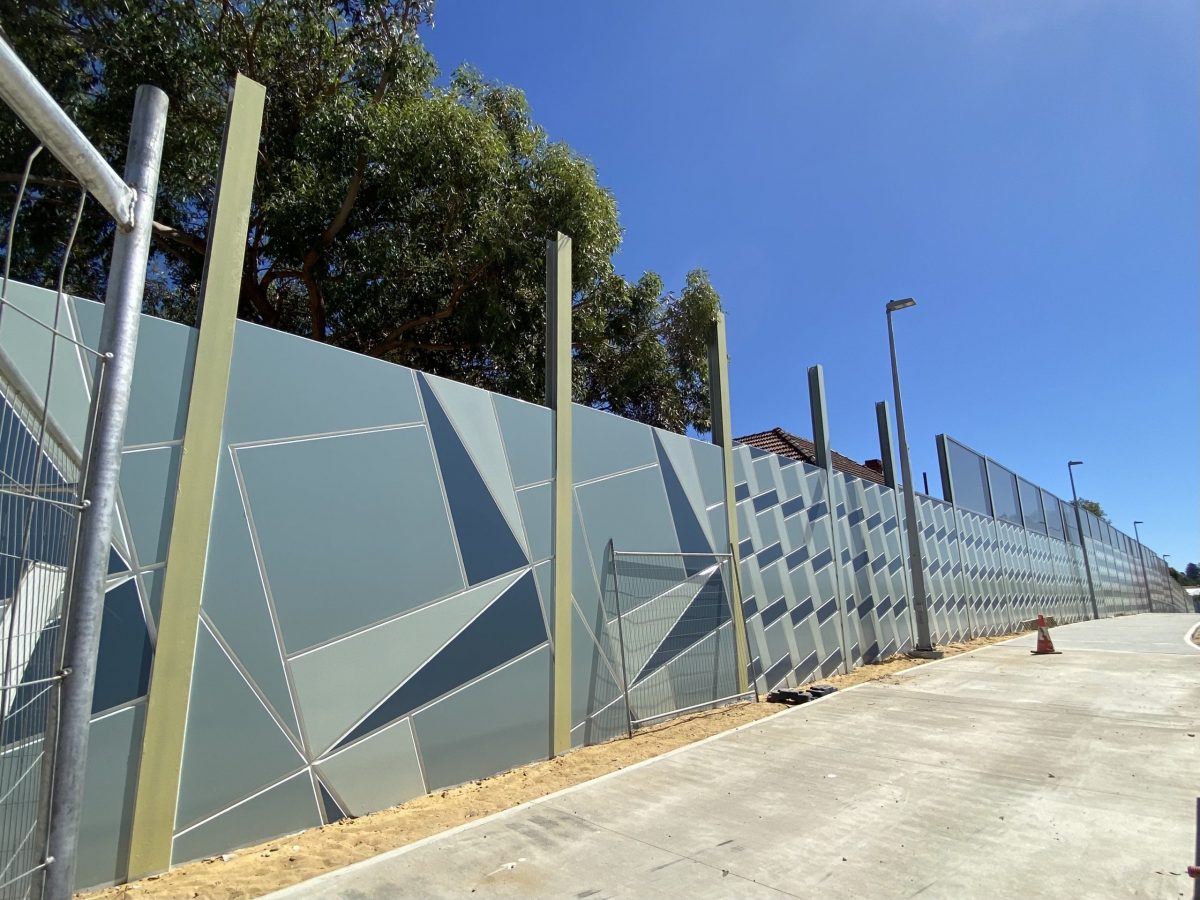 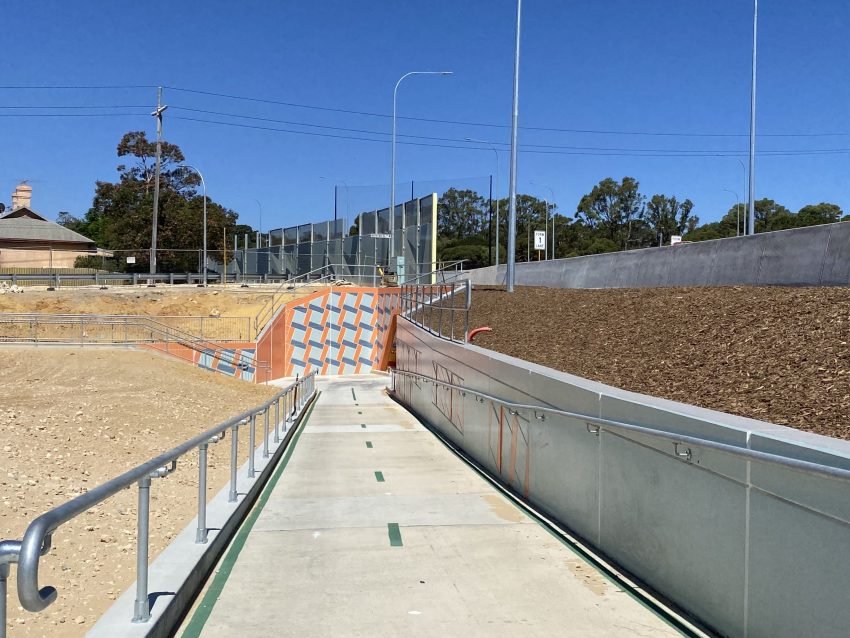 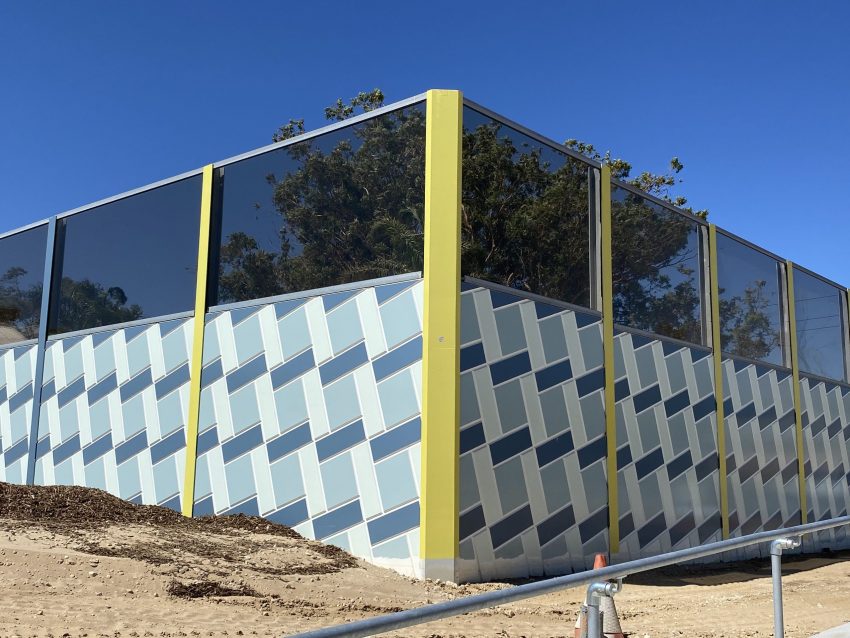 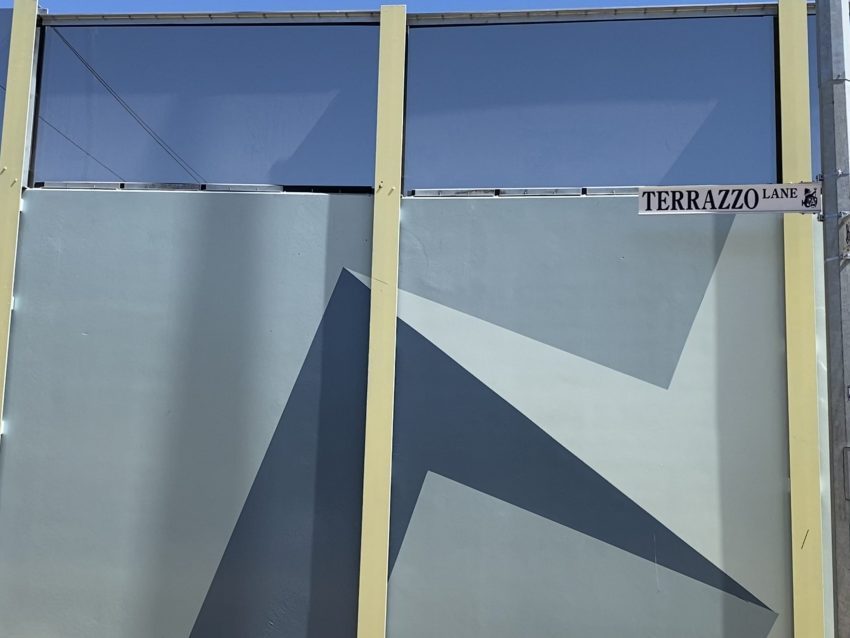 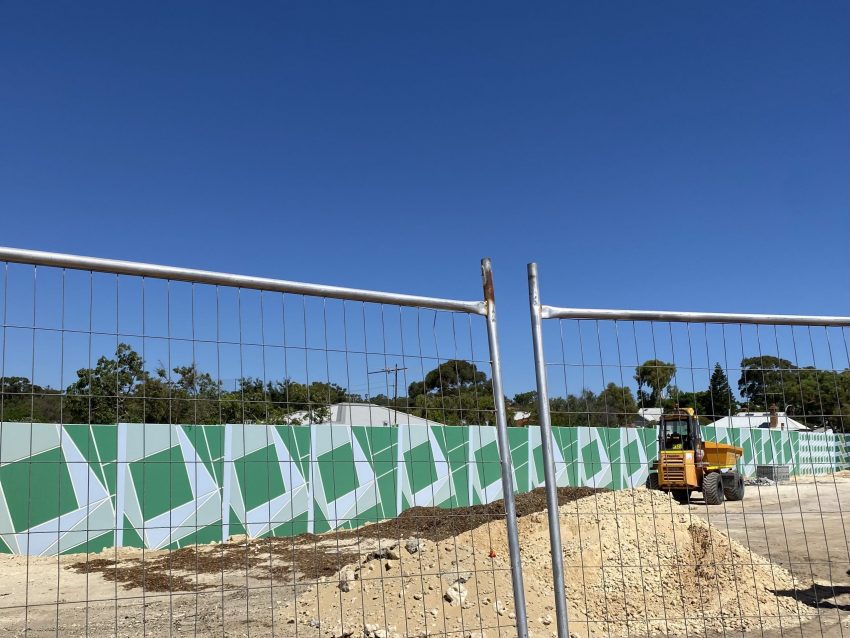 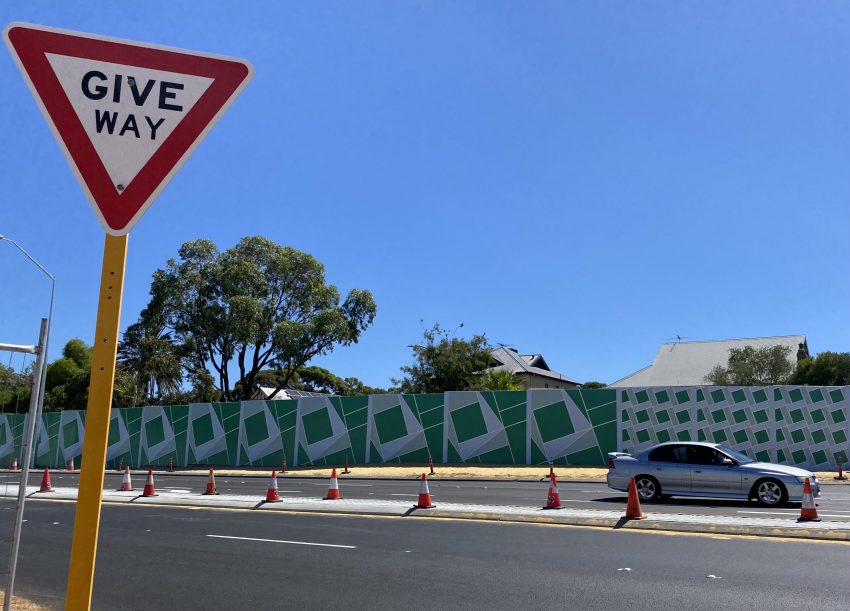 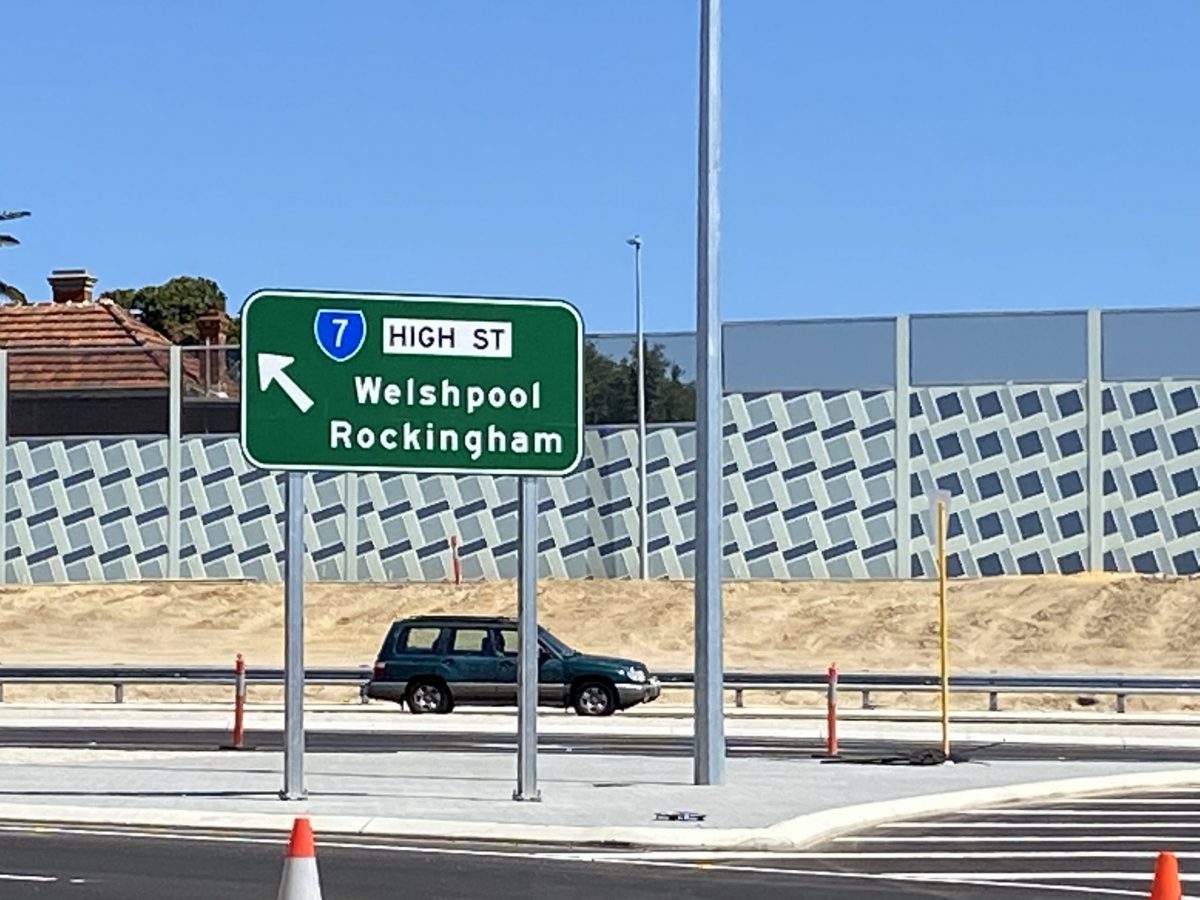