Home 2021 July 16 Light a birthday candle for our green friend!

Light a birthday candle for our green friend!

Neil has penned a loving and lovely tribute to the Green Lighthouse on South Mole, as it approaches its 118th birthday!

His article is replete with interesting historical records and photographs from days of yore.

With several weeks of winter squalls incessantly whistling over Arthur Head and licking the streets of Fremantle’s West End, it’s been a reminder we in Fremantle live in a harbour town that is more than accustomed to seeing bad weather come and go. For locals, it is of course part of life on the west coast of Terra Australis.

Such stretches of ‘bad’ weather seem to encourage those brave souls who want to glory in storms by driving or walking on the moles, especially to witness nature misbehaving spectacularly. And, standing sturdy and indomitable at the breakwaters’ ends, are our two heritage lighthouses, resplendent in their port and starboard colours.

Here’s a fair-weather shot of the two lighthouses ushering in the Arcadia a few years back! 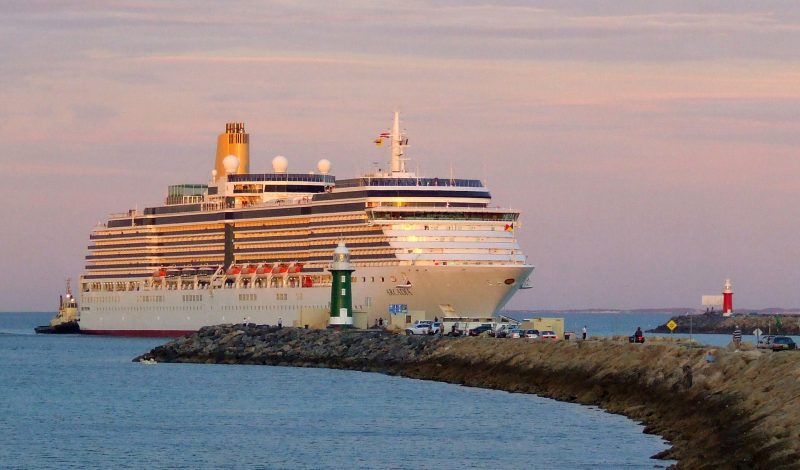 On Tuesday, the South Mole lighthouse celebrates its 118th anniversary since it was first lit on July 20, 1903. Even today, both structures are still the principal working markers of our Inner Harbour entrance and something of a comfort to arriving ships’ masters.

Fremantle Pilots’ Chief Pilot, Stuart Proctor, admits he too silently gives them a nod from the bridge as he goes about his job:

“When I see South Mole, I feel relieved that the effect of the wind will soon lessen as we get in the lee. Of course, that feeling is tempered by the need to focus on getting the ship’s speed right to round the 45-degree turn at the museum, as there’s no margin for error.”

So, even after passing the two lights, there’s a trick or two.

It is easy to overlook that Fremantle has a ringside seat to one of the most challenging maritime roadsteads on the planet, no matter if you are on the bridge of a RO-RO ship or at the tiller of a small yacht. Well-known champion Admiral’s/America’s Cup helmsman and Olympic gold medallist Noel Robins was adamant that, following a career sailing all over the world, his home waters in the vicinity of Rottnest were among the most treacherous he had experienced.

From 1829 through to the turn of the 20th century, wrecks and maritime tragedies were commonplace. No wonder CY O’Connor, upon creating his port masterpiece, didn’t overlook the task of himself designing two handsome cast iron lighthouses in the Free Classical style, then promptly ordering their manufacture by Chance Bros. in Birmingham, England.

Chance Bros. were world leaders in lighthouse design (now there’s a boutique industry!), responsible for the introduction of rotating light systems and the application of the revolutionary Fresnel lens system. The company still operates today.

South and North Mole lighthouses are identical, made of 25mm-thick cast-iron sections flanged at the edges and strapped and bolted on the inside to present a smooth exterior to defeat corrosion. The tapered column is topped out with a cupola of bronze (not brass) and a handsome balcony, though, of the pair, only the green South Mole light is crowned with the handsomest windvane you might see locally. Some pretty windows and pediments, so there you go! 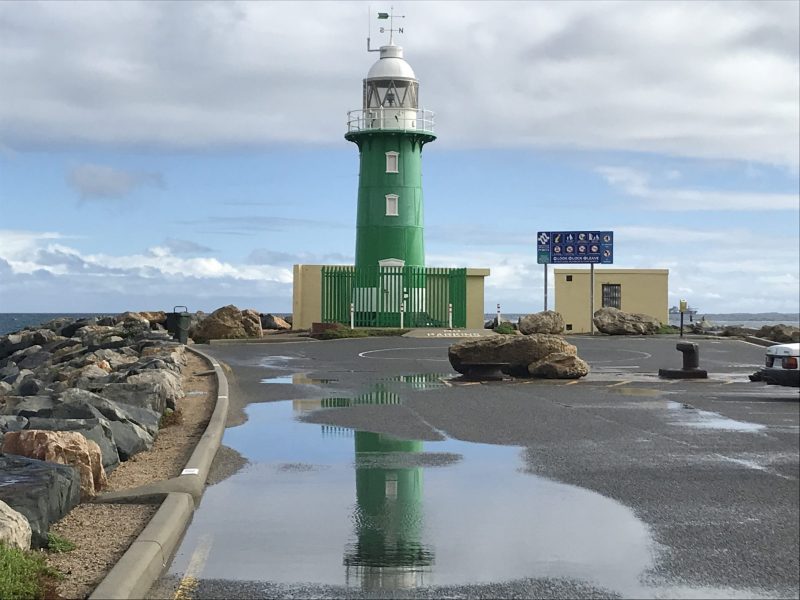 Inside there is a little mystery – a narrow spiral staircase up past doll’s house windows to the light ‘room’ and the external balcony.

But let’s go back to South Mole’s debut on July 20, 1903. Harbour Master Captain Charles Irvine’s heart probably missed a beat or two that Monday night when he was informed the occulting light he’d instructed to be lit in the new South Mole structure wasn’t quite the sailor’s guardian angel he’d expected.

Fremantle Ports’ annual report for that year explains why: “It was immediately found that the light was altogether unsuitable for the location as its rays were visible from beyond Rottnest and the Straggler’s Reef and were therefore highly dangerous as liable to be mistaken for the safety white occulting light of the Woodman Point light, which marks the fairway into Gage Roads.”

Here’s an extract from it.

Irvine quickly eliminated this risk, by installing a fixed green light. In 1947 it was changed to a flashing sequence.

At this time, the North Mole lighthouse was still in crates, not yet erected while the Engineer-in-Chief waited for the rocks on that breakwater to fully consolidate. It was not installed and commissioned with its new electric light until 1906, at which time it replaced the temporary wooden structure.

Here’s another extract from the 1903 annual report.

Here’s an image of the south mole breakwater before the lighthouse was constructed. 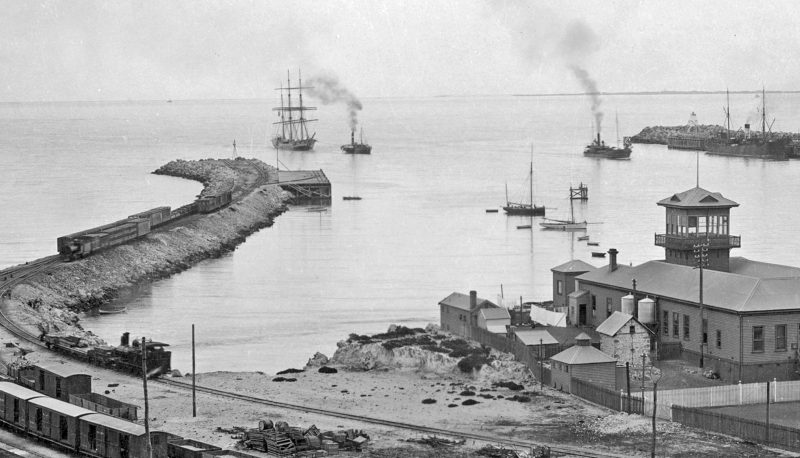 You have to love the old sailing ship and the steamers!

This photo also shows the rail line out on South Mole. It was there for two reasons. They were still constructing the mole and it was used to transport boulders out there. Also, the mole was used to load sandalwood ships. In fact you can see a sandalwood ship on the north side actually loading!

And, there’s more, the harbour works building in the foreground was where CY worked. Around 1899.

And here’s a 1910 shot of a crowd on South Mole around the lighthouse. Note the old, long gone Long Jetty on the south side of Bathers Beach in the background. 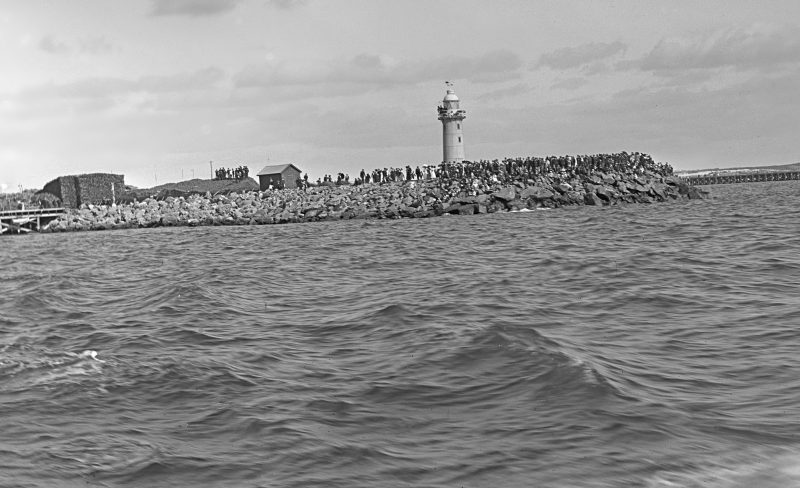 And here’s a great shot taken from the gun battery on Arthur’s Head in November 1942, which shows the 39 year old South Mole lighthouse, as well as its younger North Mole sibling in the distance. 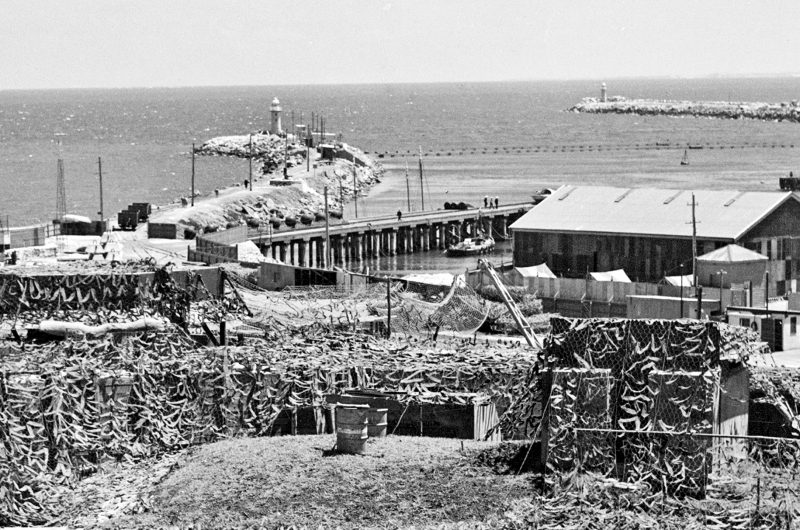 I don’t know what you think, but I feel somehow the North Mole light – while equally as charming – is the unlucky sibling. Too far from the city to really be loved and probably not the darling of photographers that the southern light is. Perhaps the snapper fishermen on North Mole would disagree!

Just fifteen metres high, our lighthouses aren’t grand in the manner of Cape Leeuwin or the equally imposing 35-metre Wadjemup Lighthouse on Rottnest, yet they have an elegant presence, are quietly loved by all types and have stood sentinel through world wars, the immigration decades of the 20th century, well over 120 years of maritime trade and the ebb and flow of the Swan River/Derbarl Yerrigan itself.

For the style-inclined, it’s worth noting they haven’t always been green and red. For much of their history, the lighthouses were painted in French Grey, as the old photos above show, though still topped out with white domes.

Fremantle Ports today owns and maintains well over 100 navigation aids both on land and ocean, with new digital and solar technology ensuring these are dependable and can automatically notify the port in a moment, when faulty. But, even in this era, the lighthouses have their place and contribute to the overall nav-aid task.

Only three months ago, the two lighthouses were obscured by scaffolding, draped then repainted for the first time in about five years. One local wag pondered if statement artist Christo had returned to Australia to put on a little show. Alas, no. But now, they glisten once again – and, in the case of South Mole lighthouse, it remains a particularly notable feature of the now-permanent-listed heritage place, Victoria Quay.