We all have different childhood memories about our toys. There is however one commonality in most of our minds: LEGO®. My brother and I spent hours and hours building with our LEGO® bricks, constructing and creating and bringing our imagination to life. 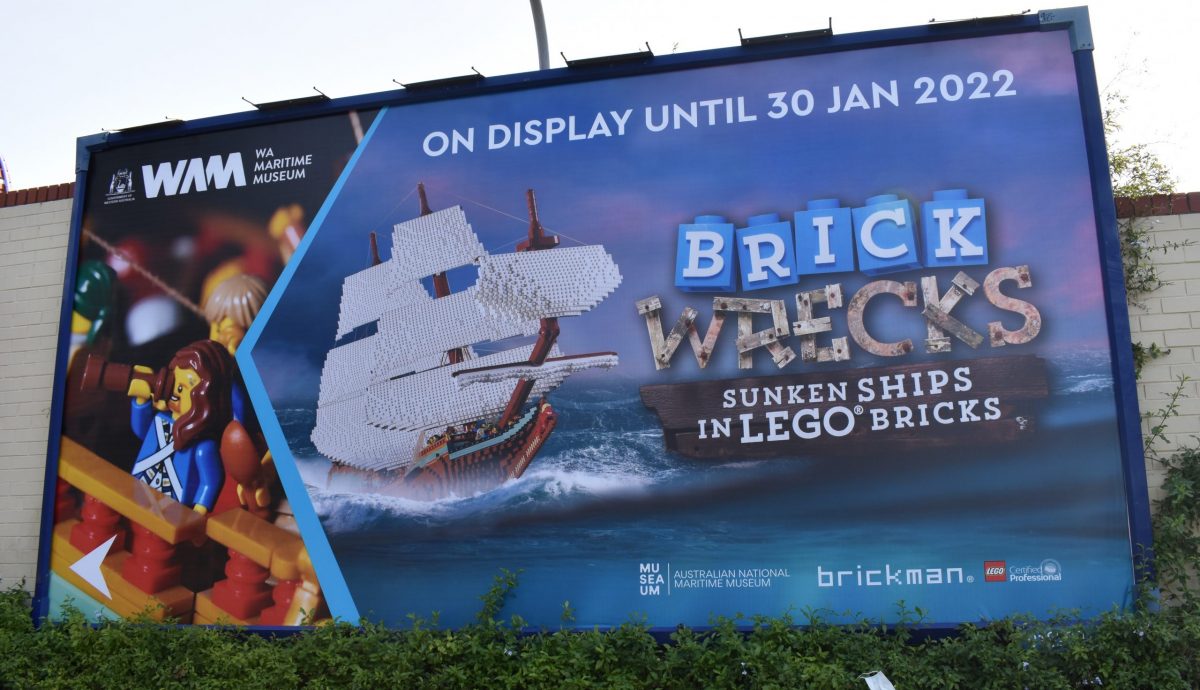 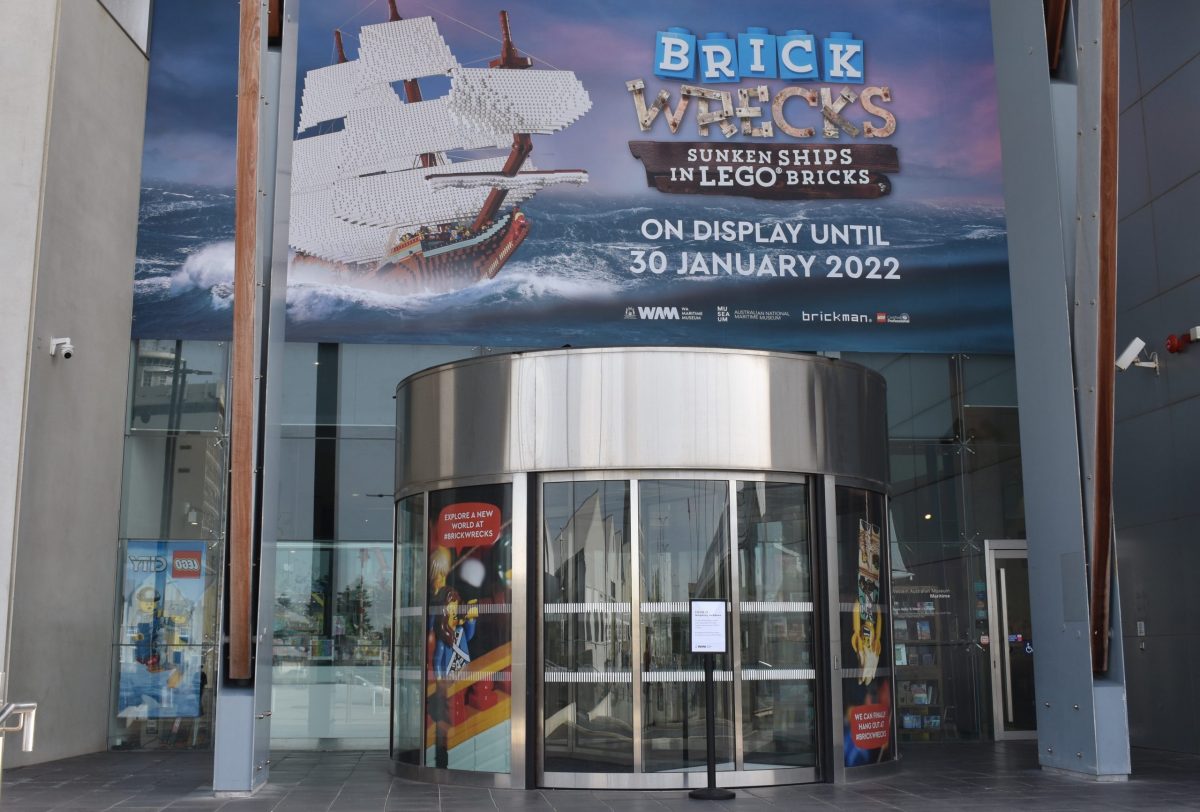 You may have seen posters around Fremantle advertising ‘Brickwrecks: Sunken Ships in LEGO® Bricks’ at Fremantle’s Maritime Museum. This is a new exhibition for those of us who loved (or still love) LEGO® bricks and those who have an interest in some of the world’s most fascinating shipwrecks.

The exhibition was developed and designed by the Western Australian Museum along with the Australian National Maritime Museum in partnership with Ryan ‘The Brickman’ McNaught. Ryan is one of 14 LEGO® certified professionals in the world.

In Fremantle we are surrounded by shipwrecks. Rottnest Island has 13 wrecks of its own with other wrecks peppering our reef-fringed coast north and south. Rottnest has been referred to as ‘the brick on Fremantle’s doorstep’, thanks to the number of ships wrecked on its reefs.

In the early 1600s, Dutch spice traders began using the fast route to Batavia (now Jakarta, Indonesia) – the Brouwer Route. Rather than hugging the African coast, Brouwer discovered an alternative route, using the strong westerly winds known as the Roaring Forties to travel east for 3,500 miles then turning north.

This route cut the journey in half, however it was a time before chronometers and hack watches had been invented. The ‘left turn’ north was often misjudged and many ships were wrecked on the Western Australian coast. This exhibition features the Batavia, one of the Dutch ships shipwrecked on our coast.

The Brickwrecks: Sunken Ships in LEGO® Bricks exhibition tells the stories behind eight of the world’s most fascinating shipwrecks. I discovered fascinating stories of the voyages, life aboard the ships, how they wrecked, their final watery graves and their discovery.

The LEGO® models of the ships range between 1-3 metres in length. The minute details and minifigs on each replica ship are incredible – if you look closely, you’ll find tiny seagulls, rats, mermaids and polar bears; crew hanging from ropes and scuba divers.

This exhibition is cleverly designed for both adults and children. The exhibition gives historical details of each wreck and tackles the impact of plastics and oil spills on the environment. These are the featured wrecks:

Vasa
The first wreck you will see is the Vasa. The Vasa was brand-new and the pride of the Royal Swedish Navy. In 1628, this 64-gun warship was packed with canons on two decks. She set off from the shipyard and sank in in Stockholm harbour, after being hit by a light gust of wind. There is an interactive model with canons where visitors can attempt to balance the ship. 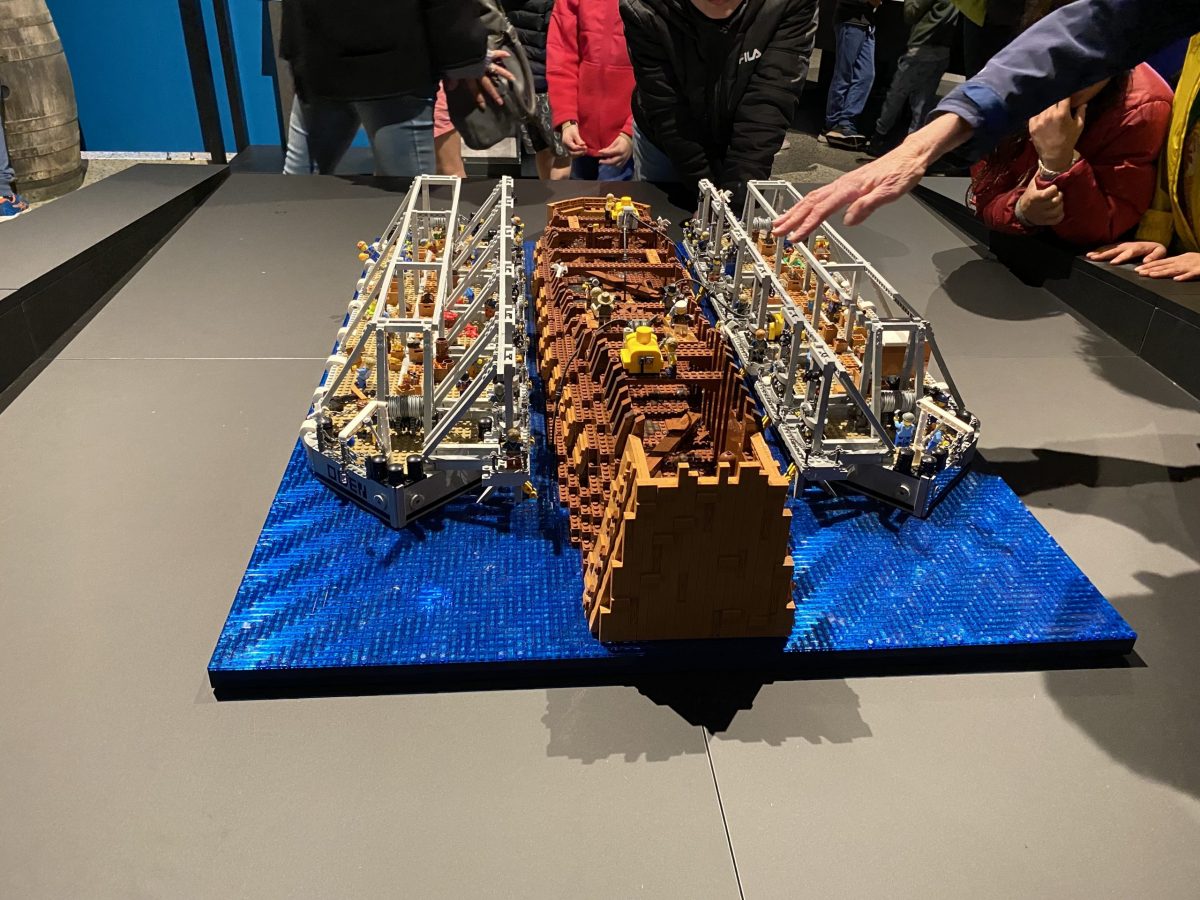 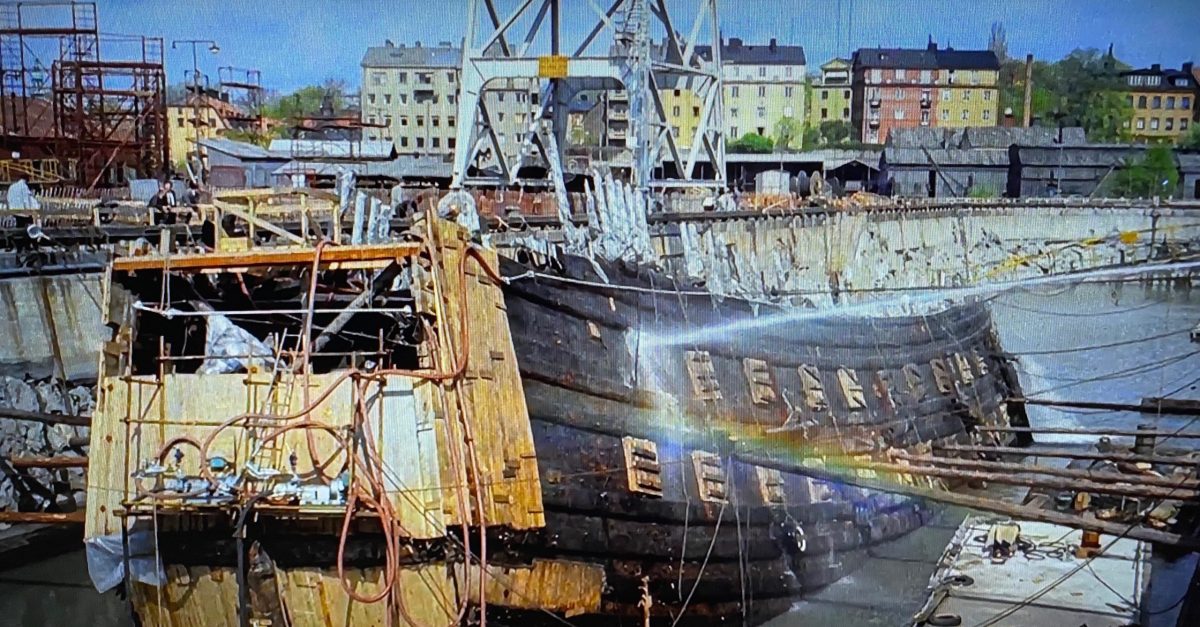 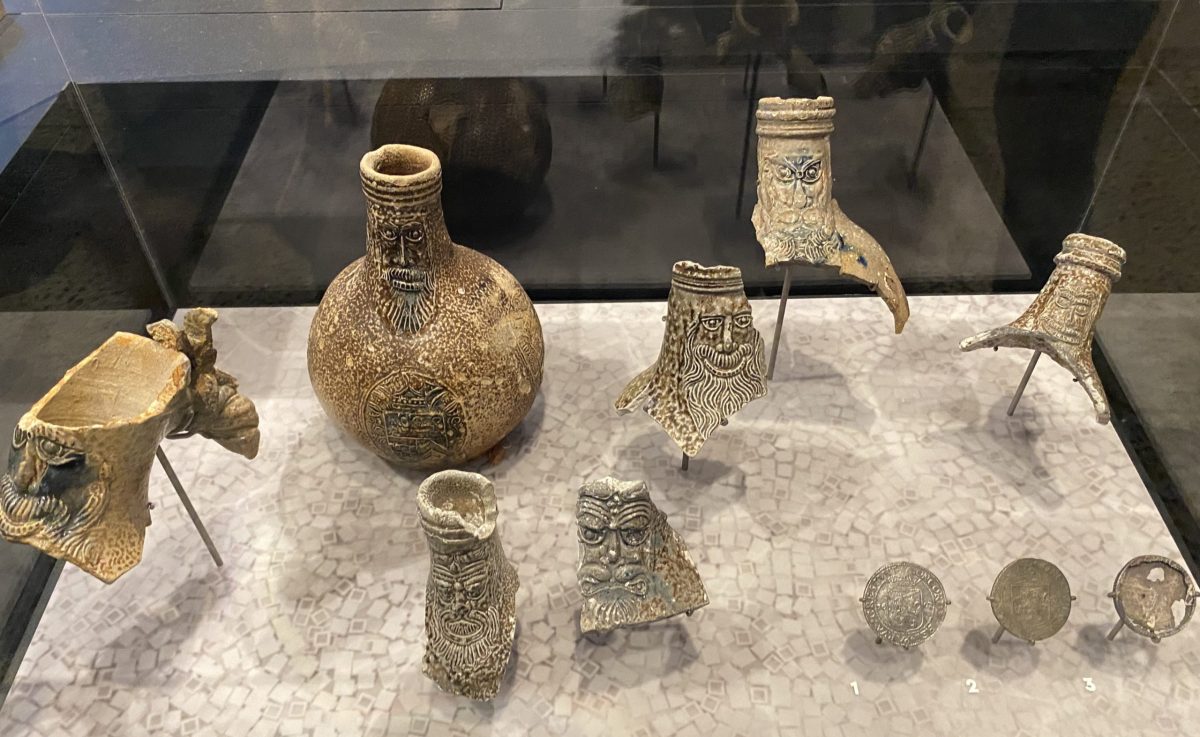 This mighty warship lay in the harbour for 333 years until she was raised from the depths. I visited the Vasa Museum in Stockholm a few years ago and saw this almost fully intact 17th century warship. 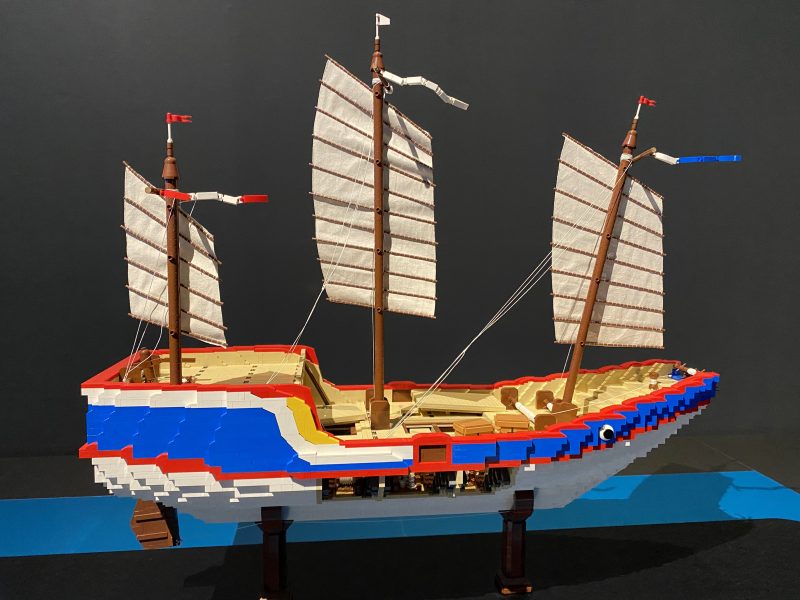 The Shinan Ship was a 32-metre Chinese trading vessel that sank in 1323 near the Shinan islands, South Korea. She was discovered in 1975. Her cargo included ceramics, metal and stone objects plus 28 tons of Chinese coins – ‘the richest ancient shipwreck yet discovered’.

Batavia
Almost 400 years ago, in 1629, the Batavia, a Dutch trading vessel smashed into a reef near the Abrolhos Islands, Western Australia. Of the 200 people that survived the wreck, only 70 were still alive three months later due to mutiny, massacres and murders.

The wreck of the Batavia was discovered in 1963 and is on display at the Shipwrecks Museum, Fremantle. If you are up Geraldton way, the Museum of Geraldton has archaeological riches from four Dutch shipwrecks including the Batavia. 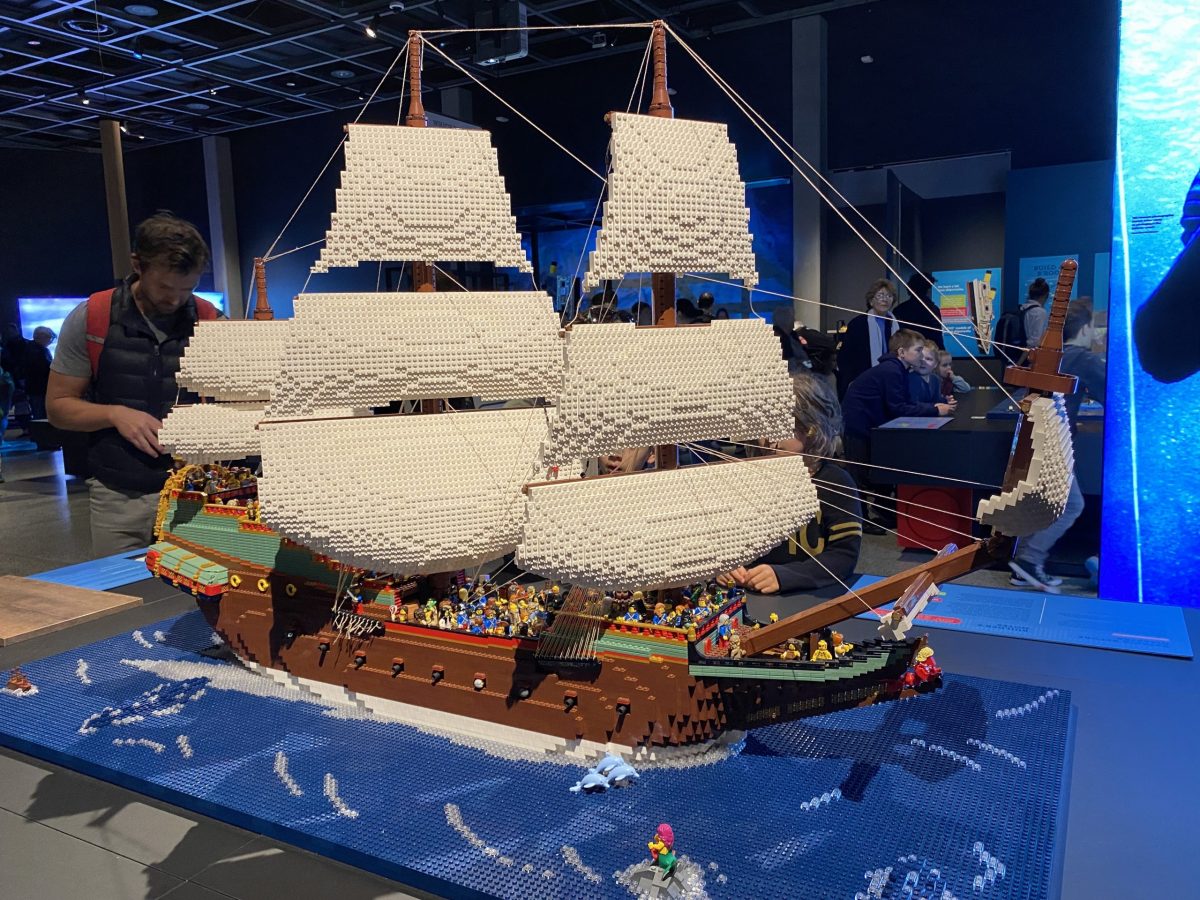 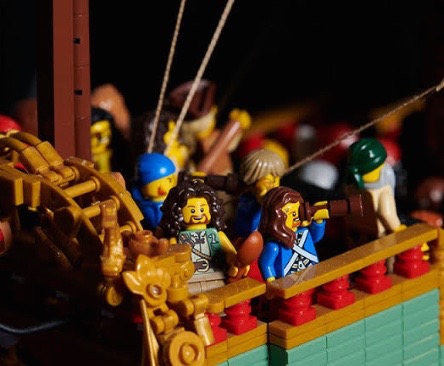 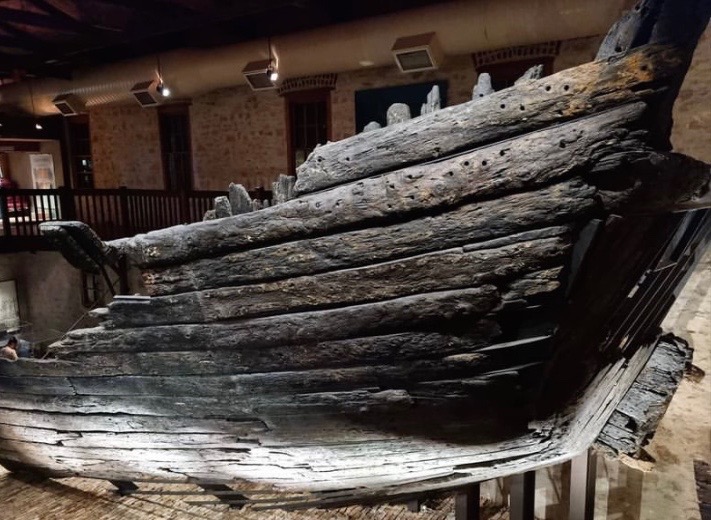 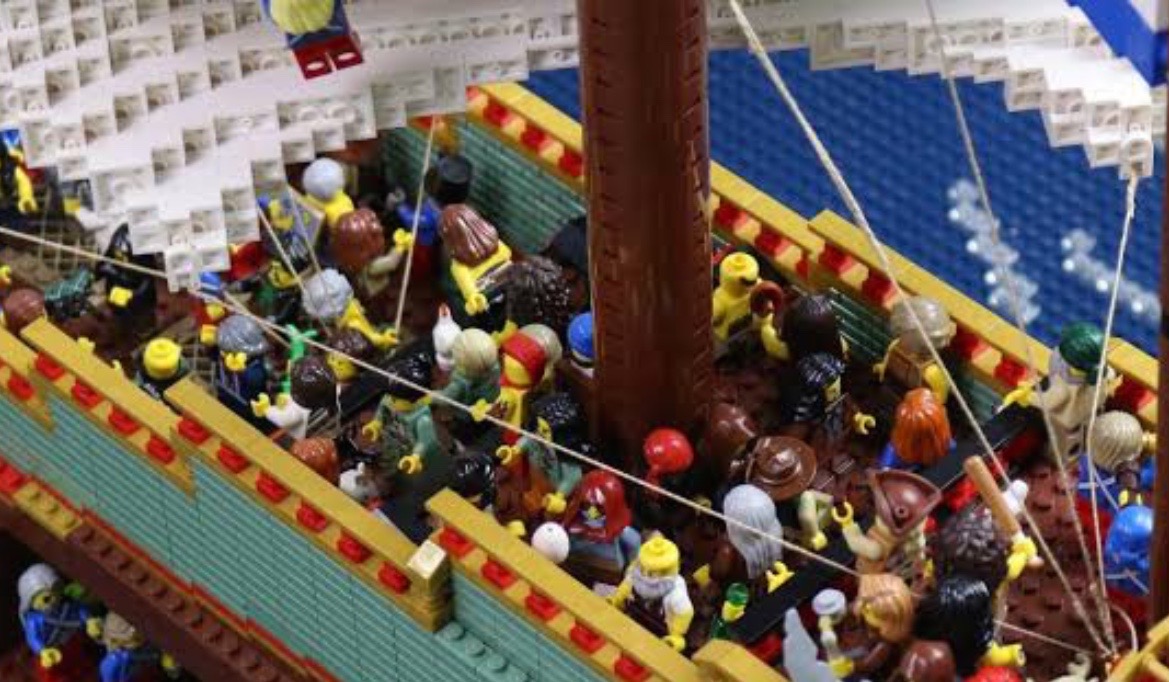 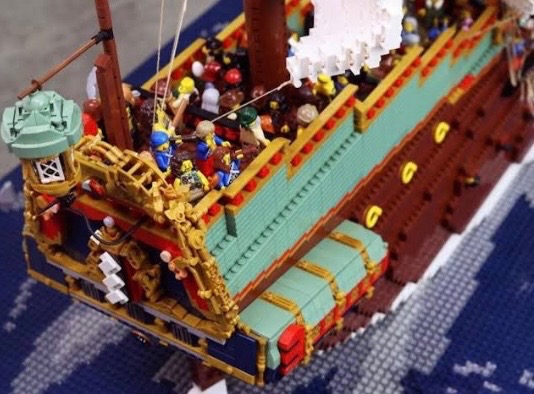 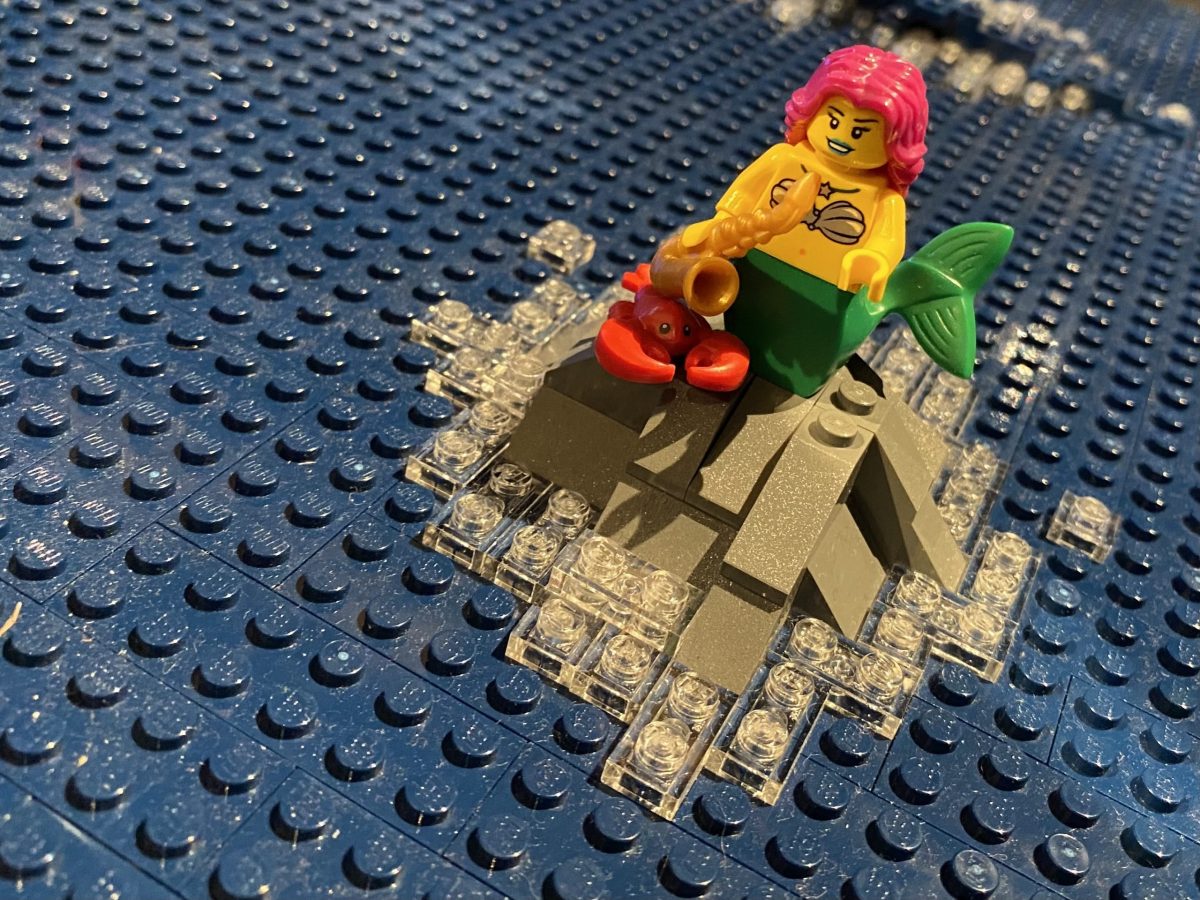 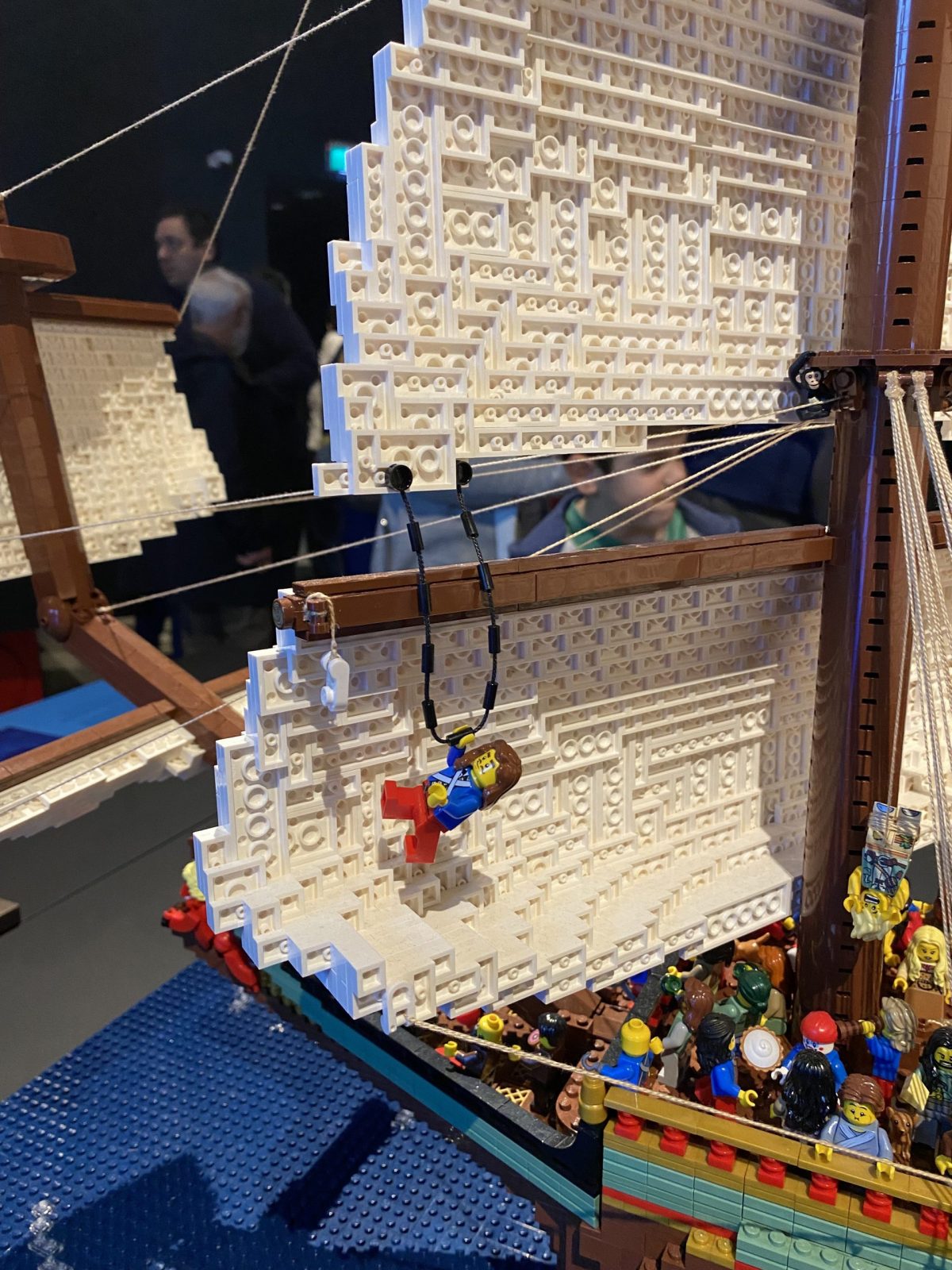 The LEGO® replica ship is packed with minifigs people and details – sailors hanging off the rigging, seagulls perched on the mast and a mermaid watching the ship sail by. Kids loved the hand mirrors with beards that made them look like a 1600s sailor. 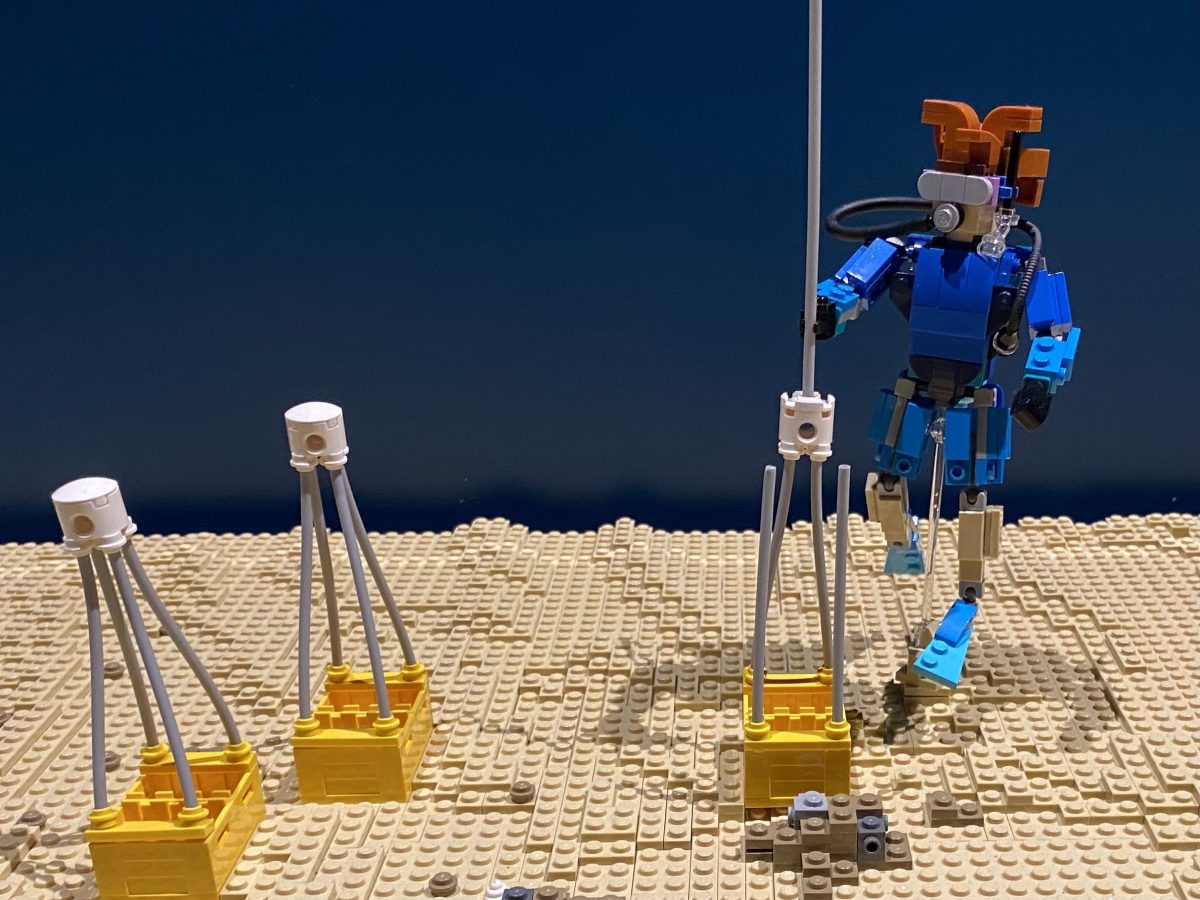 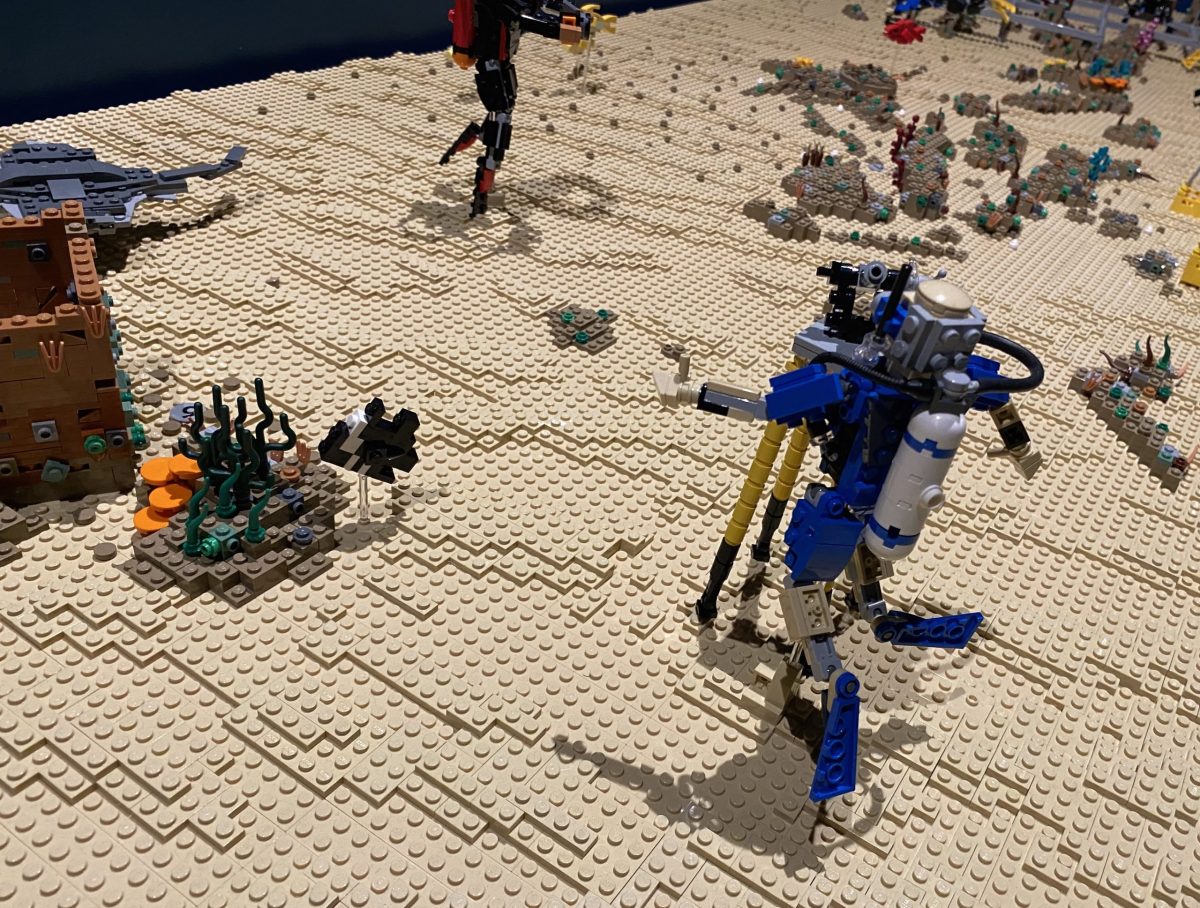 HMS Pandora was a 24-gun Royal Navy ship that wrecked in 1791 on the outer Great Barrier Reef whilst on its way to hunt down the ‘Bounty’ mutineers. Thirty-five crew lost their lives. This replica featured the undersea world of the barrier reef with a sandy seabed and scuba divers.

HMS Terror and HMS Erebus
Both these ships wrecked in 1848 off King William Island, Canada, whilst searching for the North West Passage with all hands on deck lost. 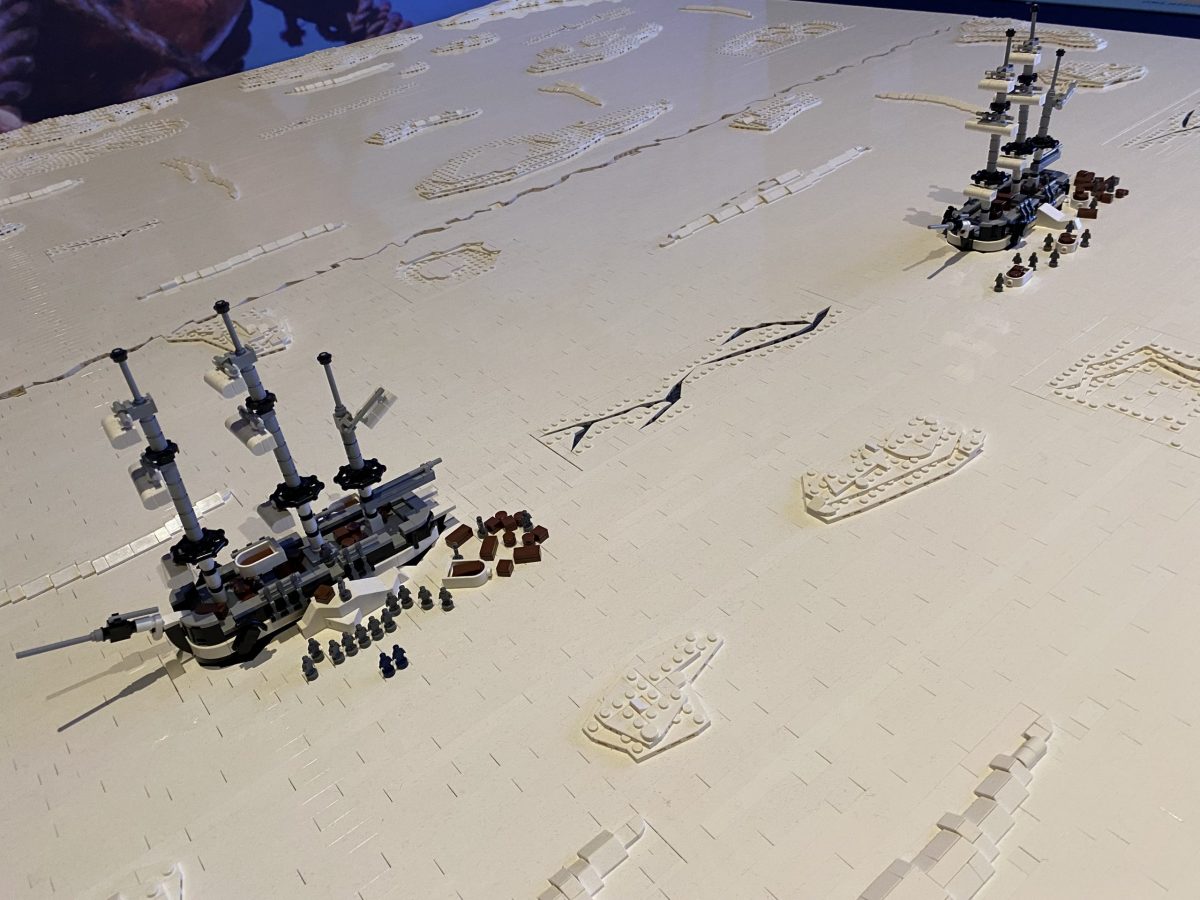 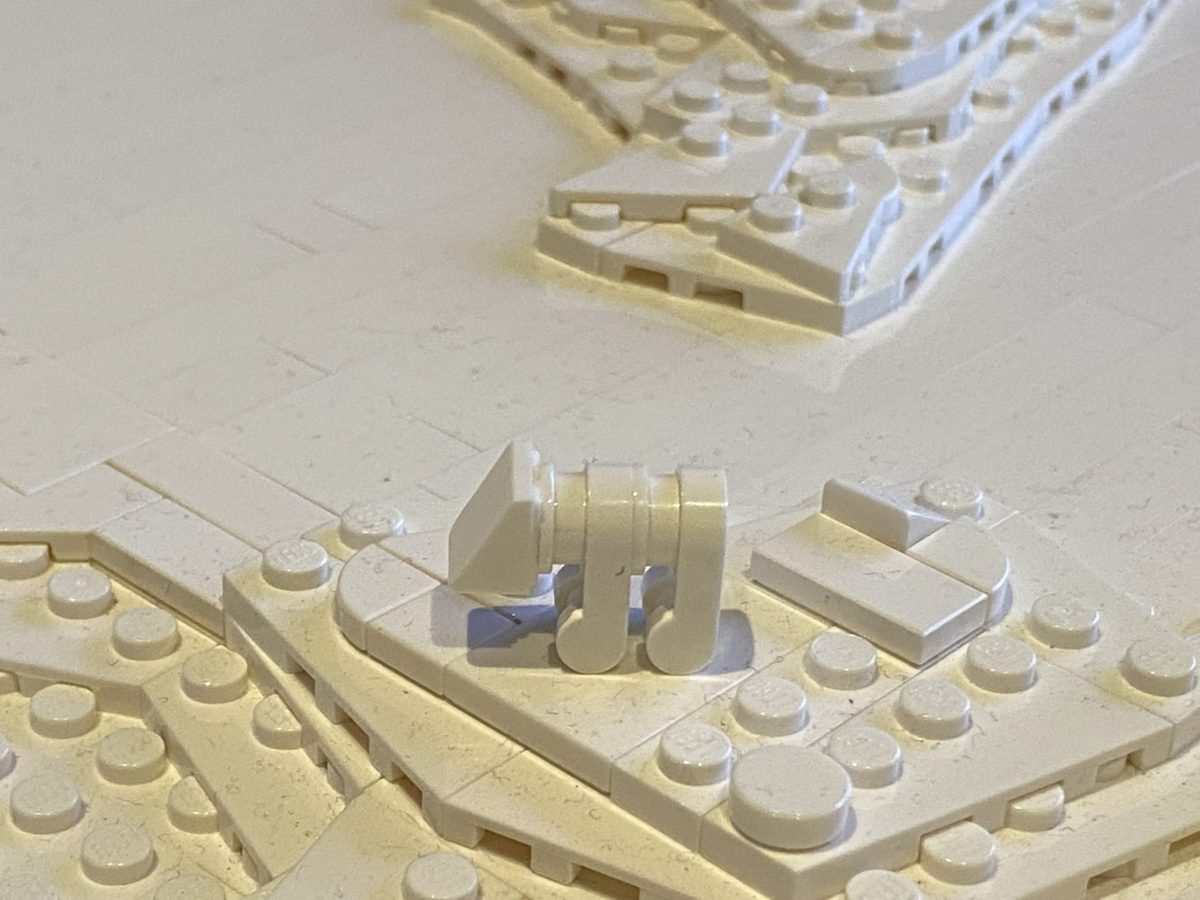 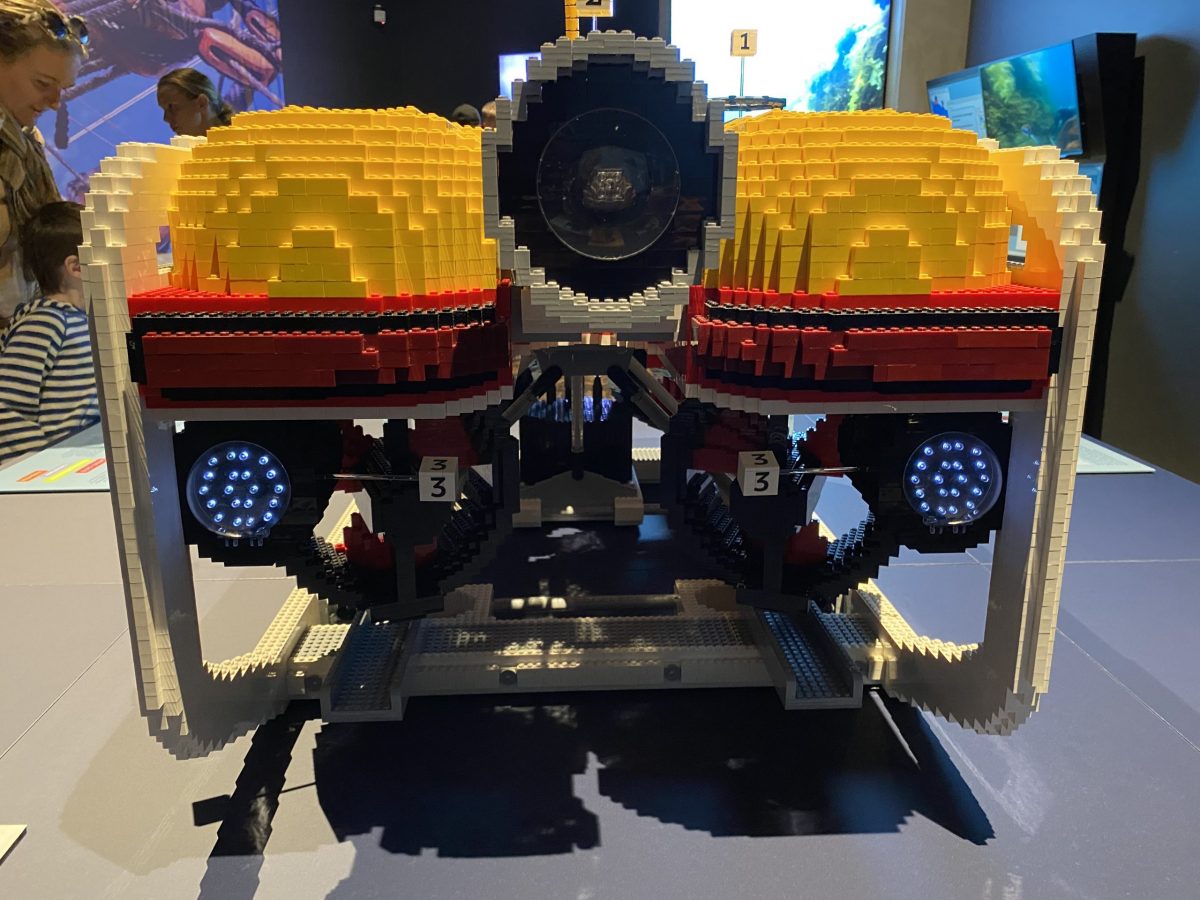 The LEGO® replicas show the two ships frozen on an ice field of Lego with icebergs and a polar bear. There is also a replica of an underwater rover complete with lights.

RMS Titanic
The ‘unsinkable’ Titanic, a luxury steamship struck an iceberg in the North Atlantic in 1912 and sank on her maiden voyage en route to New York City from Southampton. She had approximately 2,224 passengers and crew onboard. More than 1,500 died making the sinking at the time one of the deadliest of a single ship. 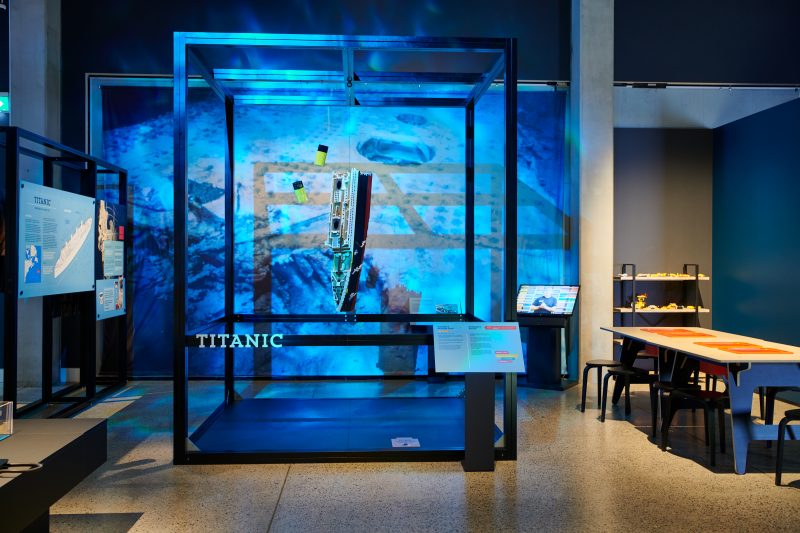 The replica shows half the ship pointing downwards and hanging from the ceiling to give the illusion of sinking. There is a video and a story about the ill-fated liner. If you ever get to Belfast, Northern Ireland, it’s worth visiting ‘ The Titanic Experience’ where the ship’s story is told.

Uluburan
The Uluburan shipwreck is oldest known shipwreck that sank off Uluburun, Turkey, around 1300 BCE. She was built with Lebanese timber and carried very valuable cargo. She was discovered in 1982. 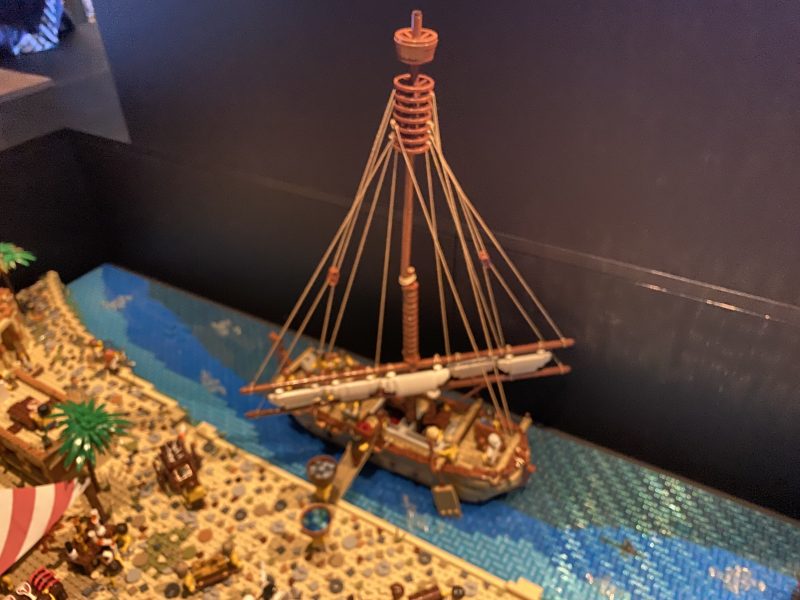 The replica shows the ship and detailed village life.

MV Rena
The MV Rena She sailed under the Liberian flag. This 3,351, twenty-foot equivalent units (TEU) container ship ran aground and sank at Astrolabe Reef, New Zealand, in 2011.

Her wrecking resulted in an oil spill. The spill was declared New Zealand’s worst ever-maritime environmental disaster. The replica shows cargo falling into the ocean. There is a video discussing the impact on the environment.

So if you are a LEGO® diehard fan or if you are fascinated by shipwrecks – head to the Maritime Museum to see this amazing exhibition.

These incredible large-scale models, multi-media exhibits and real objects from wrecks are not to be missed. A team spent over 1600 hours and used over 153,000 LEGO® bricks to create this exhibition.

We learn a lot from shipwrecks – they are like time capsules with secrets about people, trade and technology, tragedies and long-lasting effects.

There are special events for children with a Shipwreck Adventure Zone during the school holidays, and three LEGO® building stations. The gift shop in the museum foyer has plenty of LEGO® kits for sale.

Brickwrecks: Sunken ships in LEGO® bricks is on display at the WA Maritime Museum until 30 January 2022.

* This article was written by Jean Hudson who was a guest of the Western Australian Museum. The photographs were also taken by her, except where indicated otherwise.