We’re talking 8 QV Street, Fremantle, which has been an empty space between Toy World and Stella Maris for some years now.

You may recall it had a short life as an urban garden a few years back.

You know the spot. As you come out of central Freo, pedal past the Proclamation Tree, and pass through the Parry Street intersection into Queen Victoria Street, it’s on your left. Here it is! 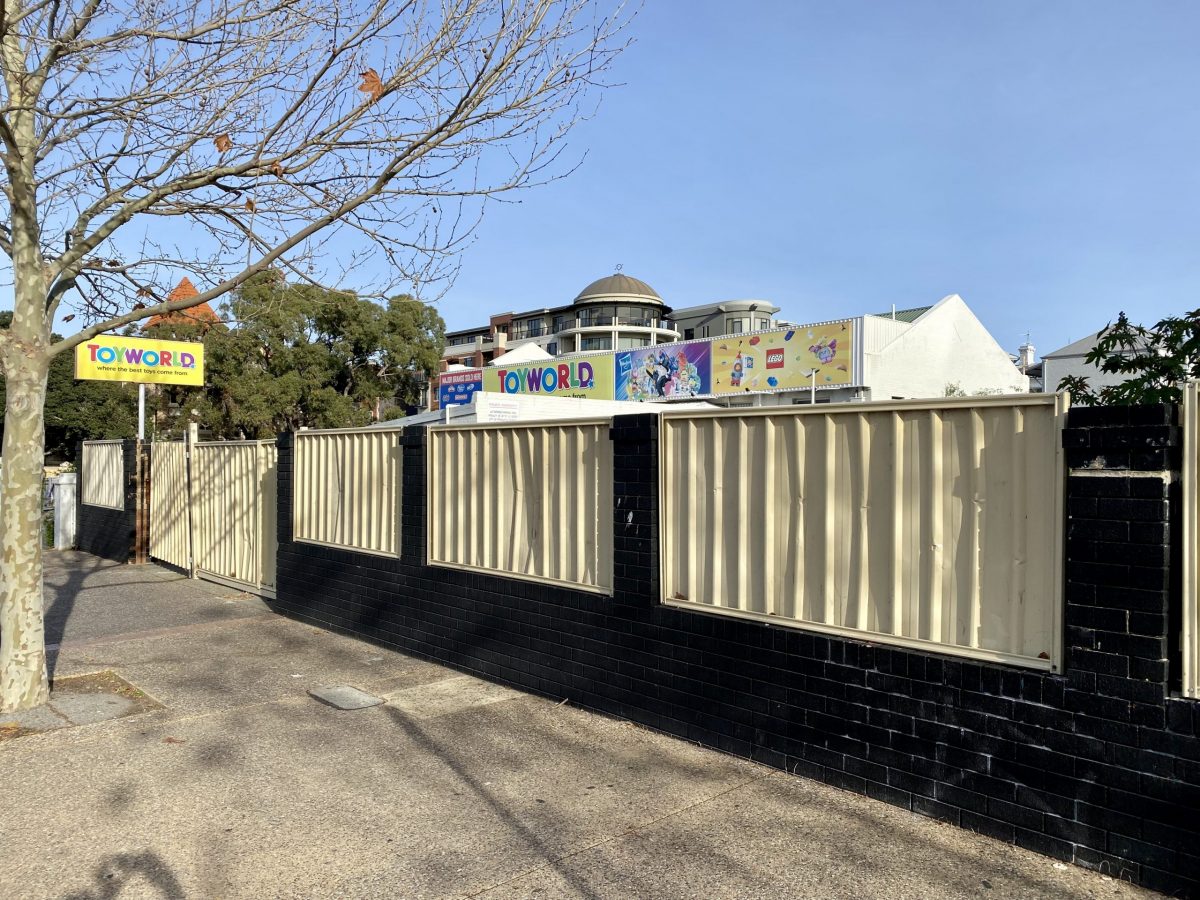 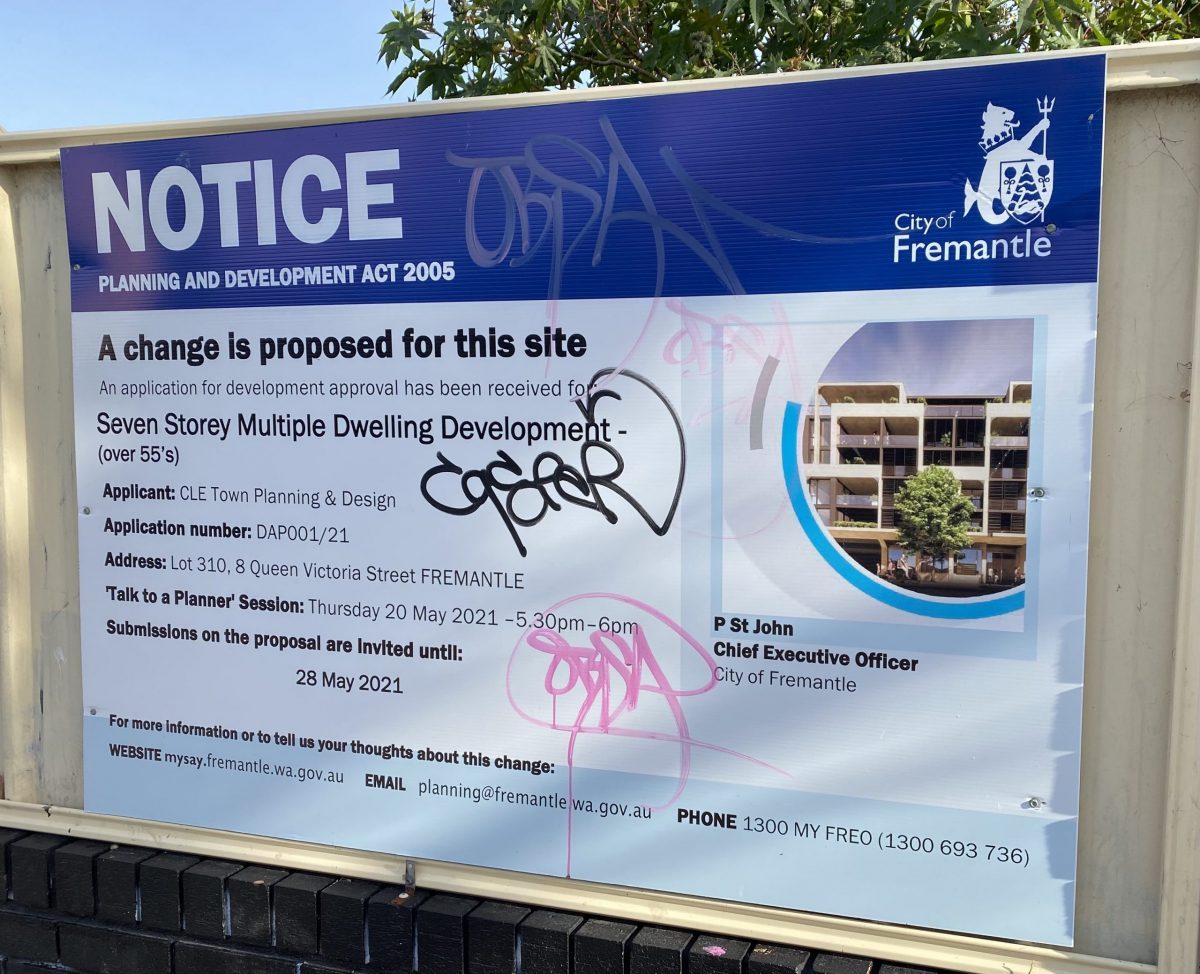 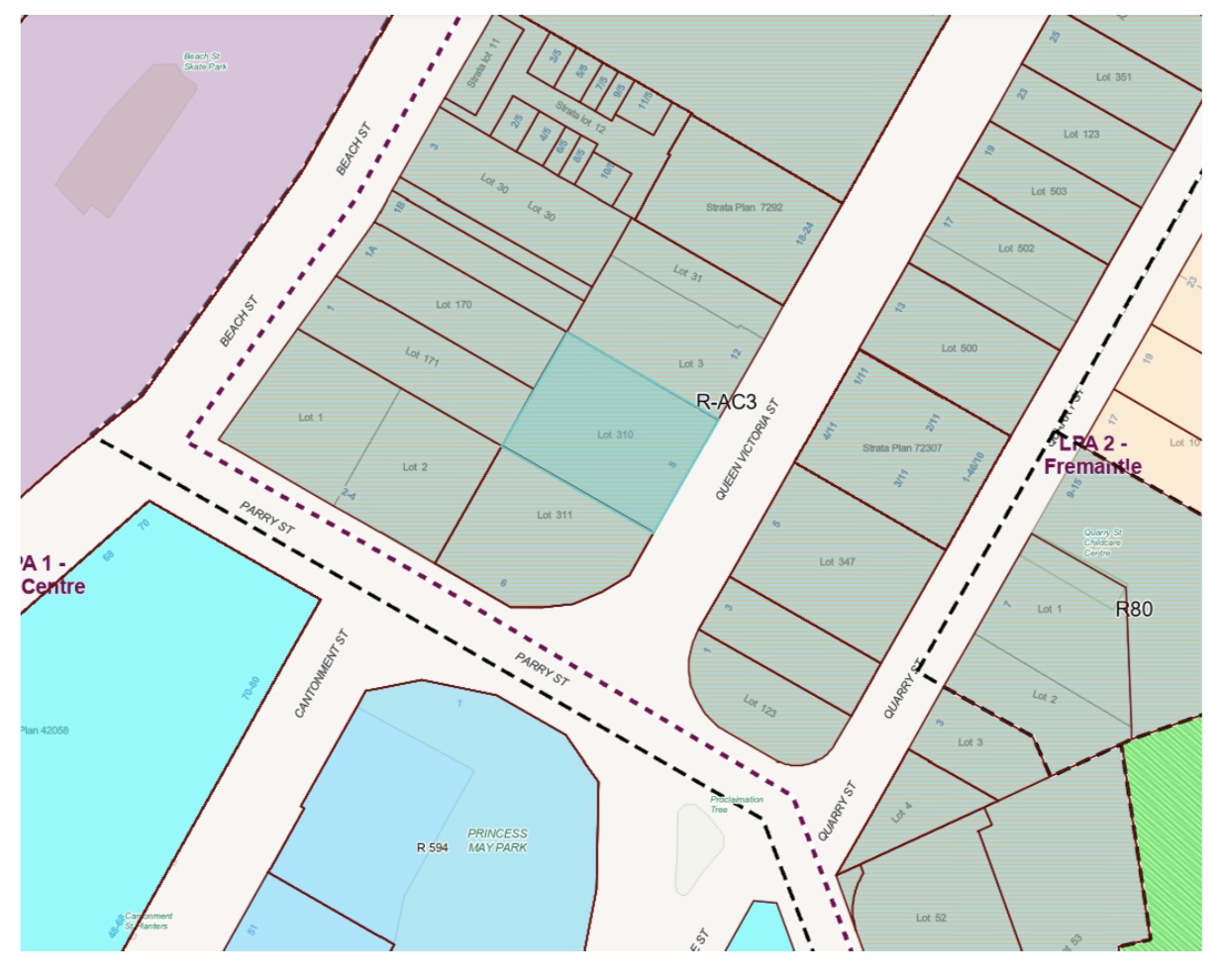 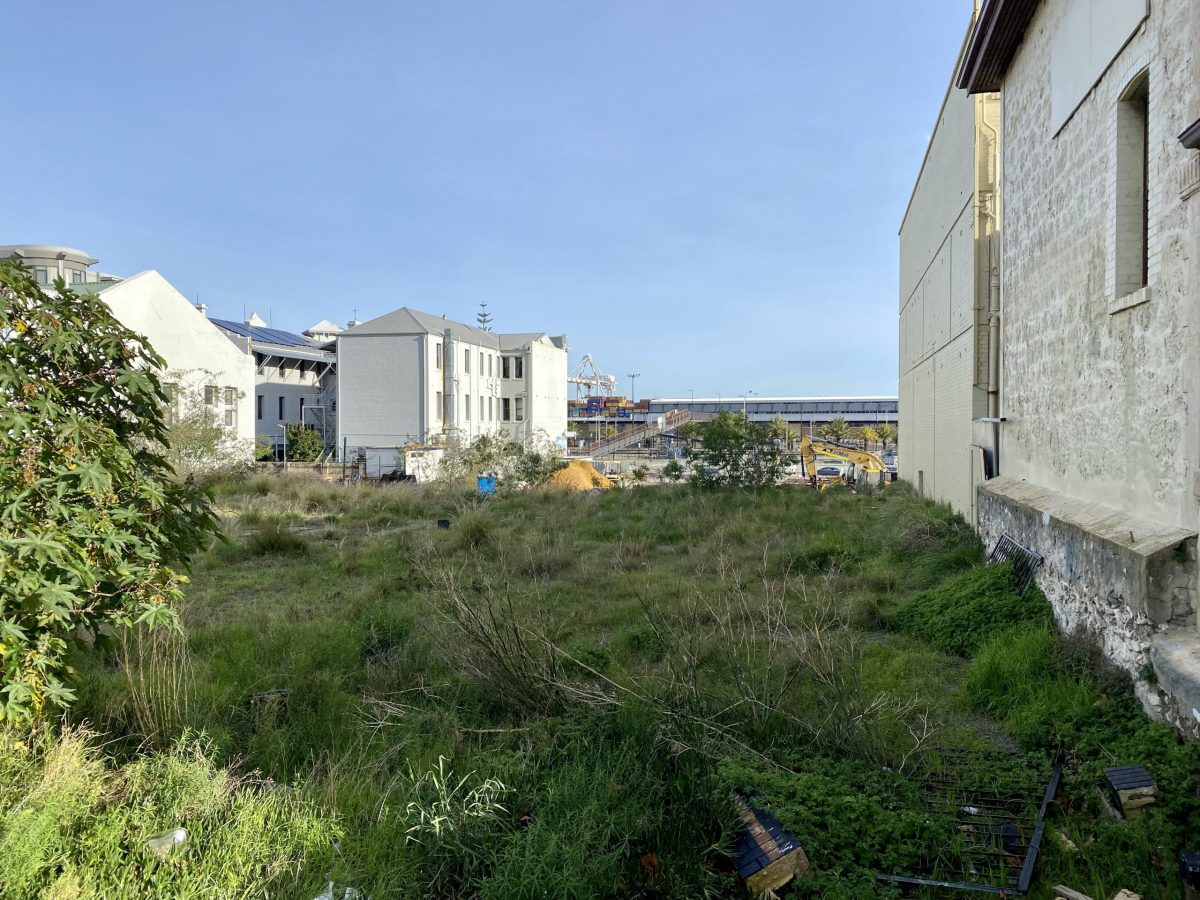 Well, it’s about to spring to life again as a 7 storey apartment building with a shop on the ground floor.

The sign in that gallery of photographs has an impression of what the apartments may finish up looking like.

We should add a cautionary note, however, about how imminent the development of the site may be, because the site has form.

Almost exactly 5 years ago, on 13 June 2016, planning approval was granted over the site for a 7 storey, mixed use development. The approved development included 42 ‘Multiple Dwellings’, that is, apartments, and a 120 square metre ‘Commercial tenancy (Office, Shop, Small Bar and Restaurant)’. But the approval was not acted upon and lapsed after 4 years.

This current proposal looks a lot like the last one. Perhaps, four year down the track, the apartment sales climate in this part of Freo is more buoyant.

But one does worry a little, as the big piece of dirt behind 8 QV on the western side, at 1 Beach Street, Fremantle already has an approval for a 6 storey apartment development and, apart from the site have a temporary use as a building materials storage yard, does not look like it’s about to become a block of apartments any time soon. In fact, it’s up for sale. Obviously the owner is hoping someone else will be motivated to do the development. Here’s 1 Beach Street. 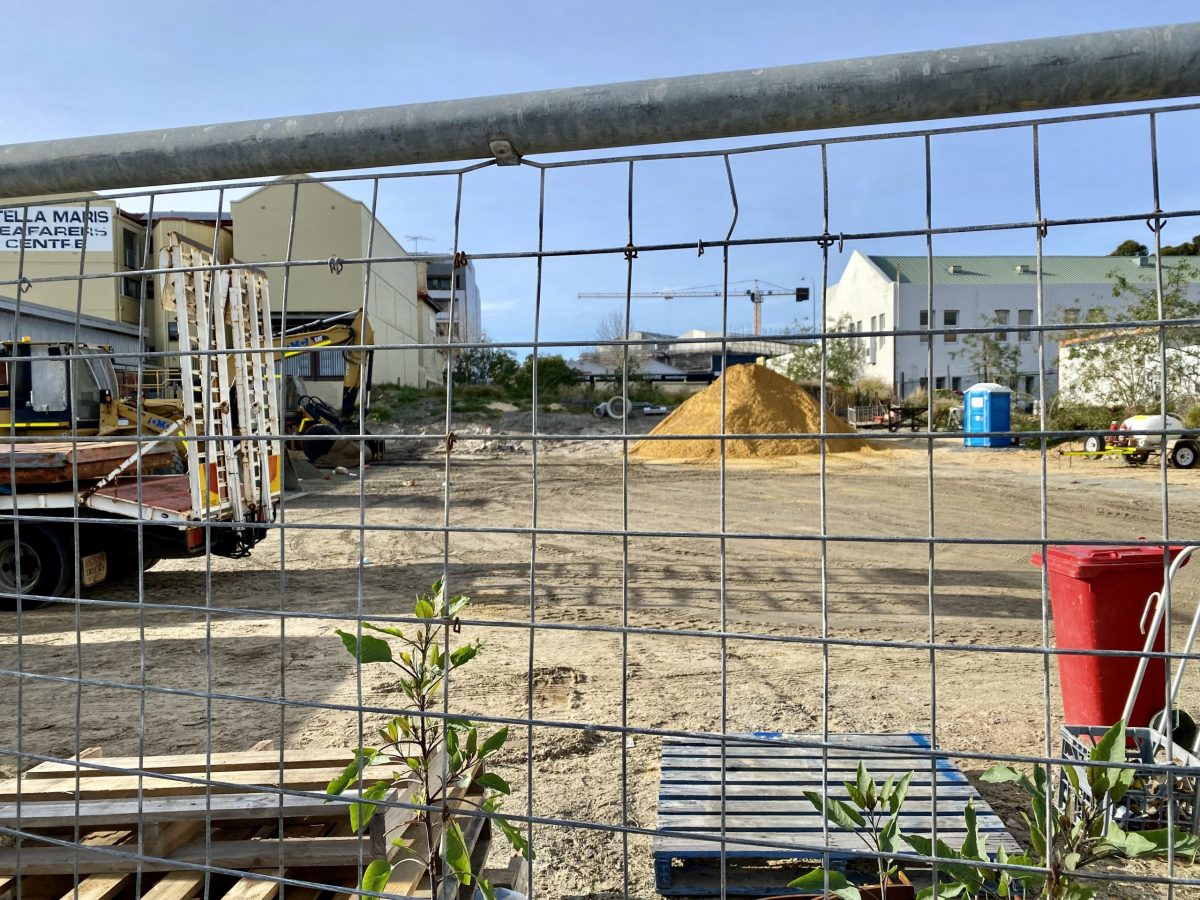 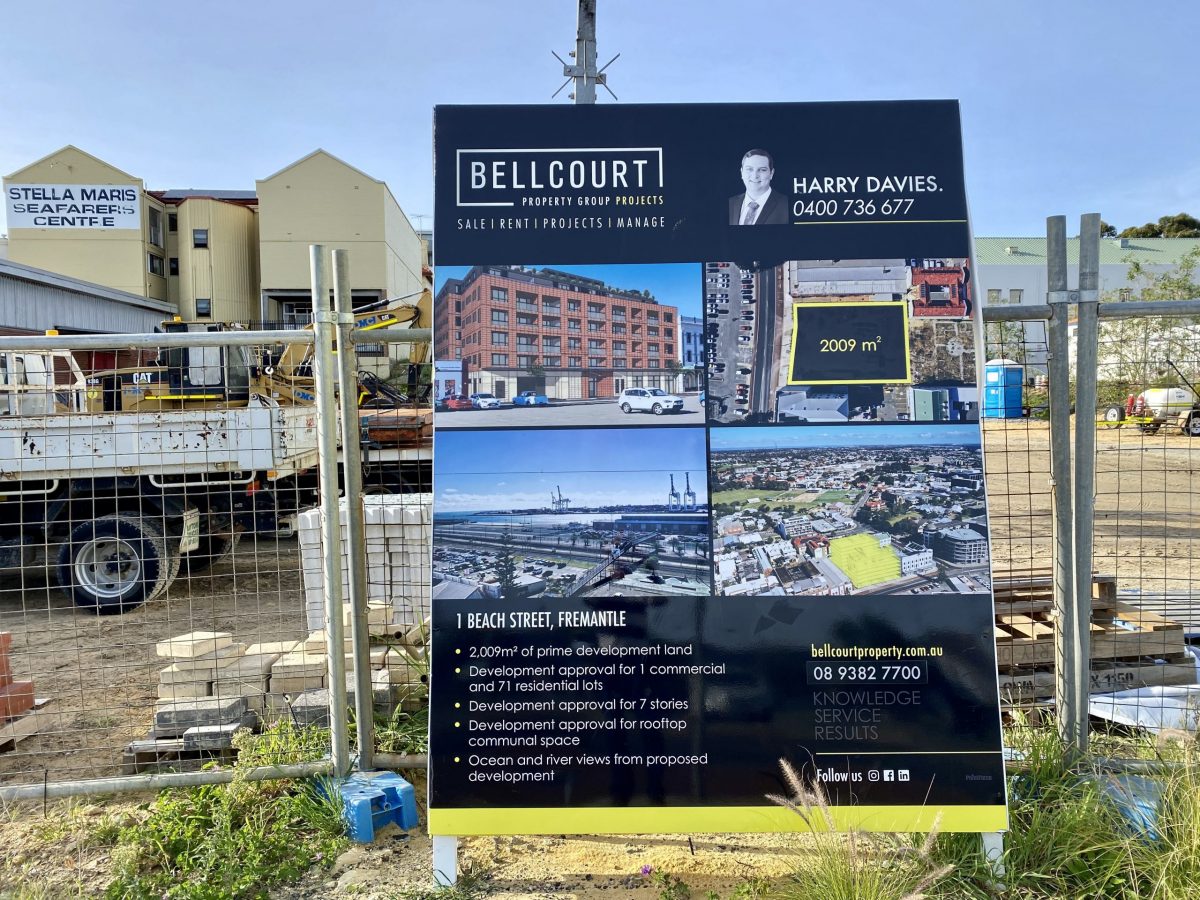 We hope these apartment developments do happen. Presently they get an approval with a 4 year life, so the lots can sit around fallow while the developers test the market, organise finance and all that sort of stuff. It’d be nice to have a system where we can be more assured than we are, that developments will happen when they get approved. But that’s the nature of capitalism, one supposes!

The thing is though, that developments like these fit perfectly with the City of Fremantle’s, the Freo business sector’s and the broader community’s key strategic objective for central and fringe areas of Freo, of increasing its residential population, that is, having more people living in the heart of the City. So much good comes, economically and socially, from having more residents in the City centre and nearby, more ‘eyes on the street’, that sort of thing. Secure and vibrant neighbourhoods.

Here’s more detail of the 8 QV proposal. As per the last approved proposal, this one is for a 7 storey apartment development.

Interestingly, it’s described as an ‘over 55s development’.

Apartments will be on levels 2 to 6.

The development is valued at $16 million and accordingly, because it exceeds $10 m, it can’t be finally approved by the City of Fremantle and must be determined by a JDAP – a joint development assessment panel on which the City is represented. However, the City is able to comment on the proposed development before it gets to JDAP.

On 8 June 2021, following comments by DAC – the City’s Design Advisory Committee – and the City’s planning officers on the initial proposal and detailed plans, the applicant lodged amended plans which now seem to be hunky dory, according to the planning officers.

In light of the report of the planning officers, one expects the City’s Planning Committee will support the current formulation of the proposal when it meets this coming Wednesday night, 7 July 2021.

With the Committee’s endorsement, which it gives on behalf of the City of Freo under delegated authority, one would also assume JDAP approval will be a formality.

So what are the features of the proposal?

You’ll have been doing your sums. That’s a total of 50 apartments. An increase of 6 over the 2016 approved development. 24 apartments are 2 bedroom, and 26 are 1 bedroom.

This reflects the over 55s theme. There’s an apparent demand and need for one bedroom apartments everywhere, including in Freo, these days.

From a planning assessment perspective the planning officers in their report to the Planning Committee have few concerns with the proposed development.

While it’s height was a tiny, 800 mm above the prescribed limit, variance wasn’t considered to be an issue in this case.

But an interesting question of balcony space arose, particularly from an overlooking, privacy angle. As it often does. In this case, as mentioned earlier, the development has Toy World on its southern side, Stella Maris on its northern side, and the yet to be built, but approved, 6 storey apartment development behind it at 1 Beach Street. That western side is the side on which Port glimpses might possible be enjoyed from apartments at 8 Queen Victoria Street and from the rooftop area.

In the result, the planning officers were not overly fussed about any privacy impact on neighbours noting that the balcony setbacks were acceptable in the context of the following:
• Balconies overlook roof space at 12-16 Parry Street which is not sensitive.
• Balconies overlook non-residential development, roof space and parking areas to the south of the subject site which is non-sensitive.
• The development at 1 Beach Street has been approved with a six storey building with apartments facing the subject site setback at 6m from the boundary. A western balcony interface is not a suitable orientation preference for the site due to the approved development to the rear on 1 Beach Street, which proposes east facing balconies facing the rear boundary of the subject site.
• The portions of west facing balconies at the rear are provided with privacy screening to restrict overlooking to adjoining rear apartments.
• Portions of balconies which have an indirect west view have indirect line of sight to the adjoining future development and do not directly impact apartment balconies and bedrooms at 1 Beach Street.
• Terraces include landscaping and minimum 1 m setback to screen views north and south.
• All units are provided with an external outlook from a major opening and balcony to maintain amenity.

After considering all the usual other issues, the planning officers concluded that overall the proposed development –
* Satisfied all criteria with respect to building height, plot ratio, building depth, visual privacy and car parking for the development.
* Was supported, subject to usual planning conditions, as it will contribute to the contemporary mix of medium density urban development for the City centre, noting that city centre and fringe of city centre residential population is a ‘key strategic objective’ of the Council.

As we say, we expect the apartment proposal will get Council and JDAP approval subject to all the usual conditions imposed on such developments.

The bigger, unanswered questions remain whether the apartments will actually get built this time round – and whether those at 1 Beach Street will see the beautiful light of the Port any time soon?