Fremantle’s War Memorials – Lest we Forget.

The dawn service this Anzac Day was like no other. For the first time since during World War 2, there were no public events to commemorate Anzac Day. People, holding candles, took to their driveways to mark the occasion. They stood united and socially distanced apart practicing private and contemplative moments to remember the fallen, those who served and those who continue to serve. Lone buglers sounded the Last Post from various locations around the Port City.

On 31 October 1914, two ships departed from Fremantle, the Ascanius, carrying 65 officers, 1728 men and 10 horses, and the Medic, carrying 28 officers, 977 men and 270 horses. These two ships joined a fleet of 41 ships carrying approximately 30,000 soldiers, 2,000 sailors and 8,000 horses sailing to join the World War, WW1, the first World War of the 20th century. This was the longest journey to war in the history of the world and changed Fremantle forever.

Fremantle has several war memorials, statues and plaques. Due to the current closure of public buildings, I was only able to visit some of the memorials that are in the open spaces.

The Fremantle War Memorial is located at Monument Hill in Fremantle. It is surrounded by a four and a half hectares/eleven acres reserve, with rose gardens, lawns and trees. At 43 metres above sea level, this is one of the best vantage points in Fremantle. The views to the west over Fremantle Harbour, Gage Roads, Garden Island and Rottnest Island are amazing. To the east one can see the Darling Ranges. 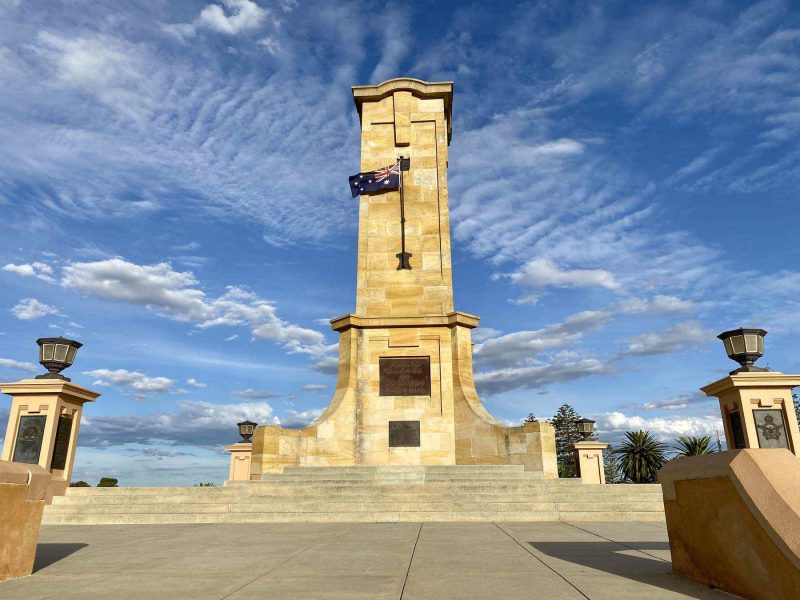 This memorial was built and unveiled in 1928 to commemorate the 59,330 Australians killed or posted as missing in action in WW1. The main memorial comprises a large obelisk, the Fallen Soldiers’ and Sailors’ Memorial.

The memorial is encircled on three sides by eight smaller memorials that commemorate WW1, WW2, the Korean War, Malayan Emergency and the Vietnam War.

The memorial now commemorates all Australian service men and women who served in all wars and conflicts.

There is also a 21-inch-diameter mounted torpedo dedicated to United States submariners who died at sea during WW2. We sometimes forget that many were based in Fremantle during that war.

The names of 849 Fremantle–based servicemen who died in WW1 are shown on 12 bronze plaques. Bronze plaques on the granite entrance pillars are dedicated to the Women’s Auxiliary Services in WW1 and WW2. Another plaque honours the Aboriginal service men and women who fought for Australia in its hour of need since the Boer War in 1900. 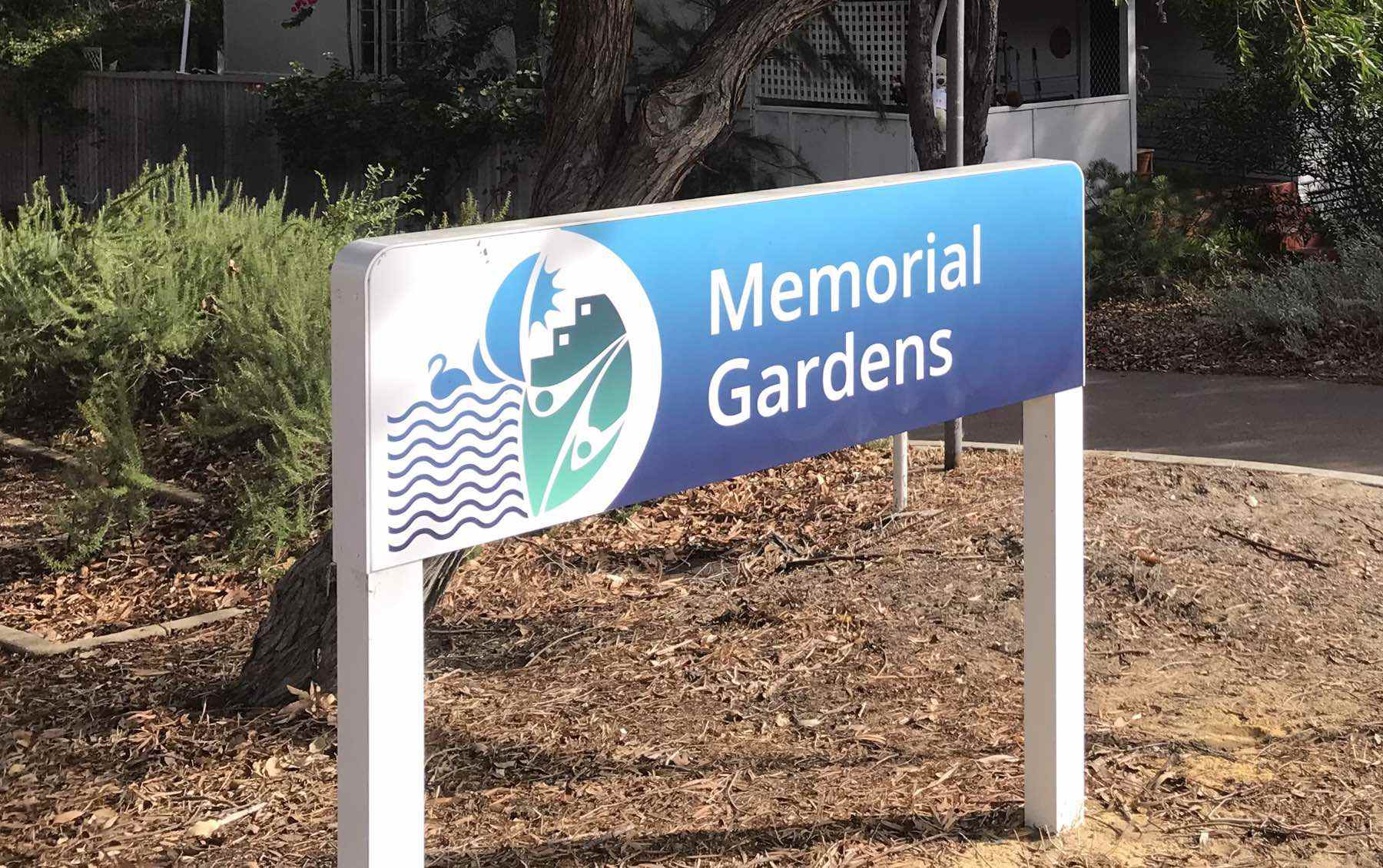 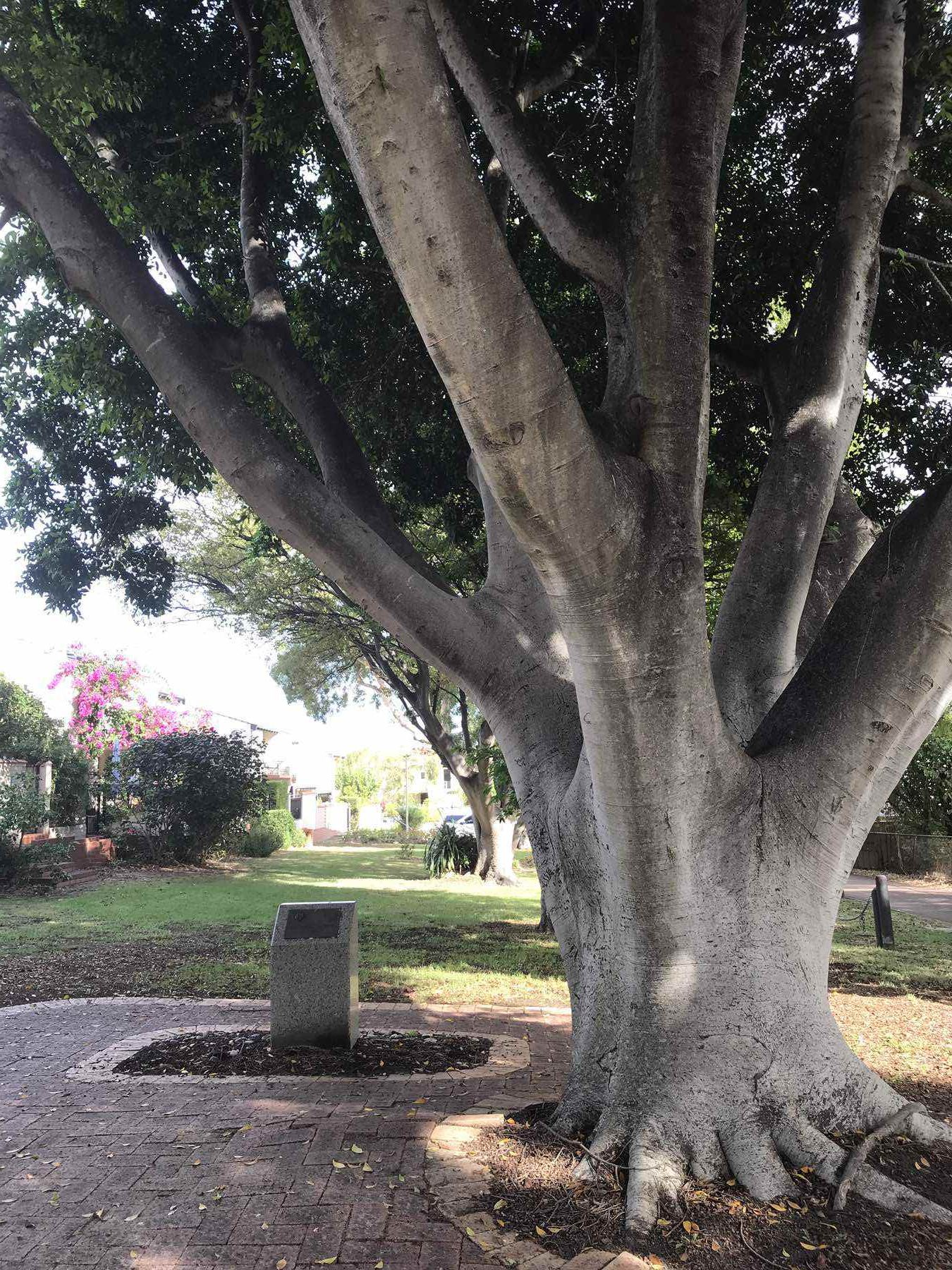 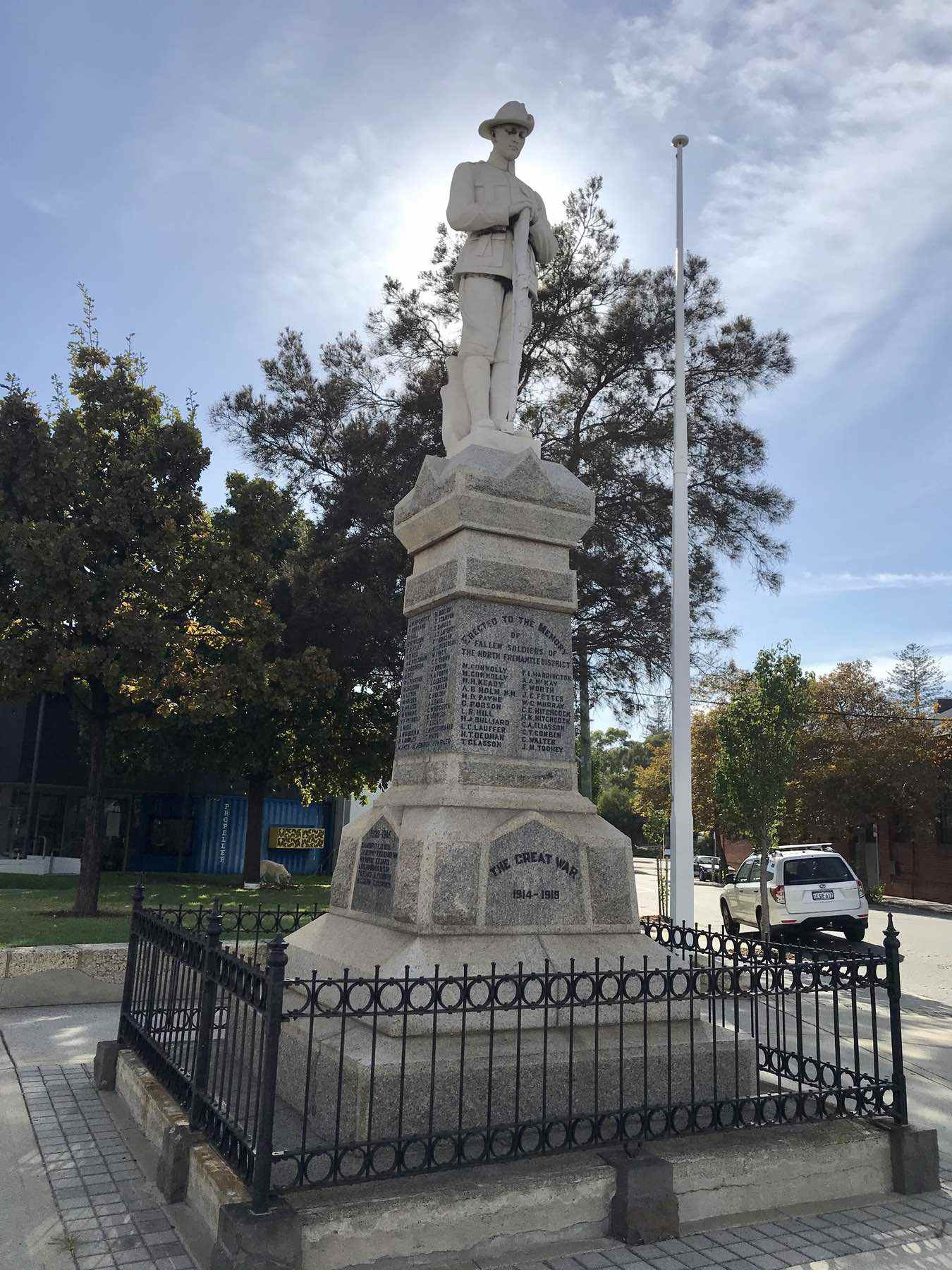 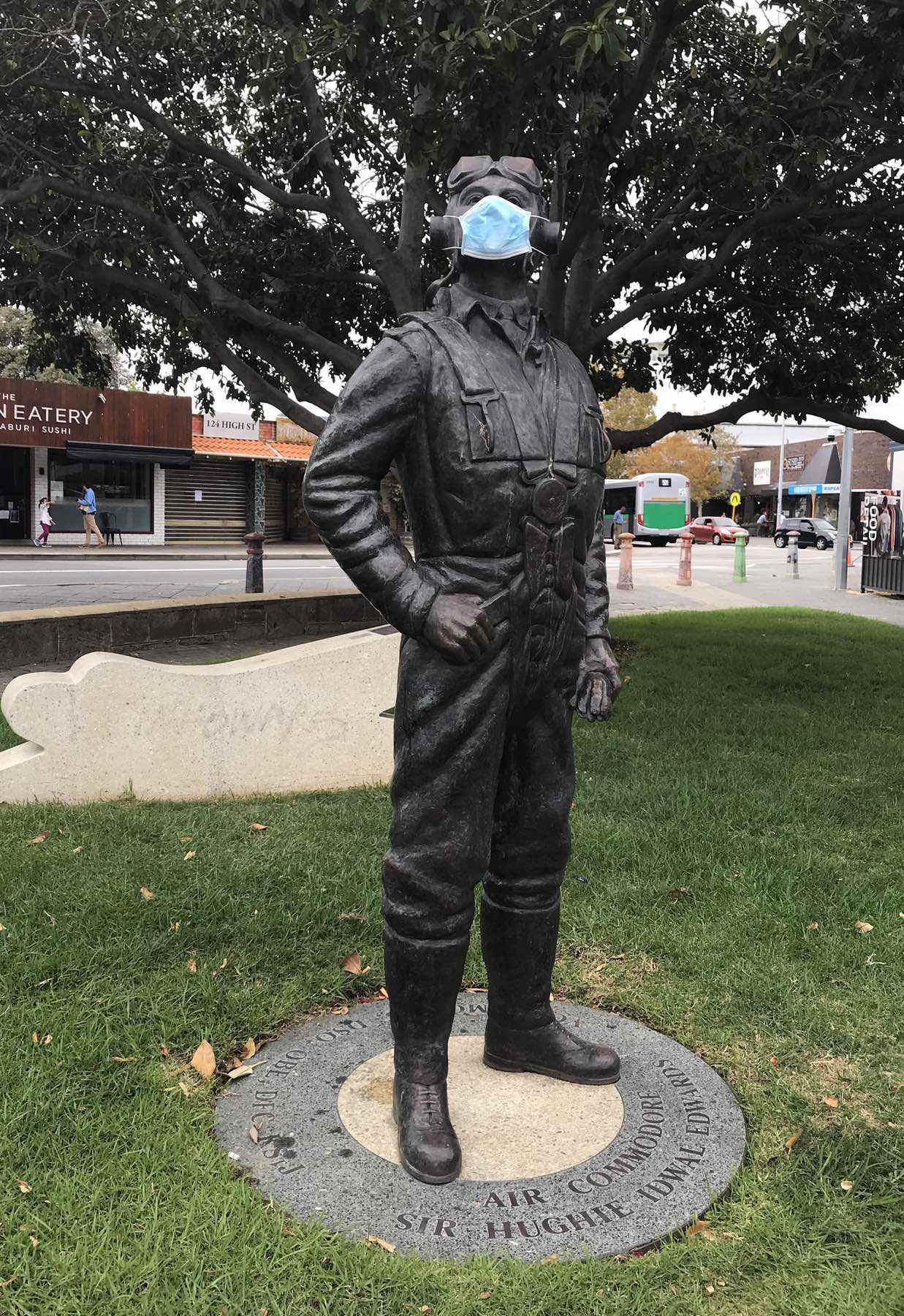 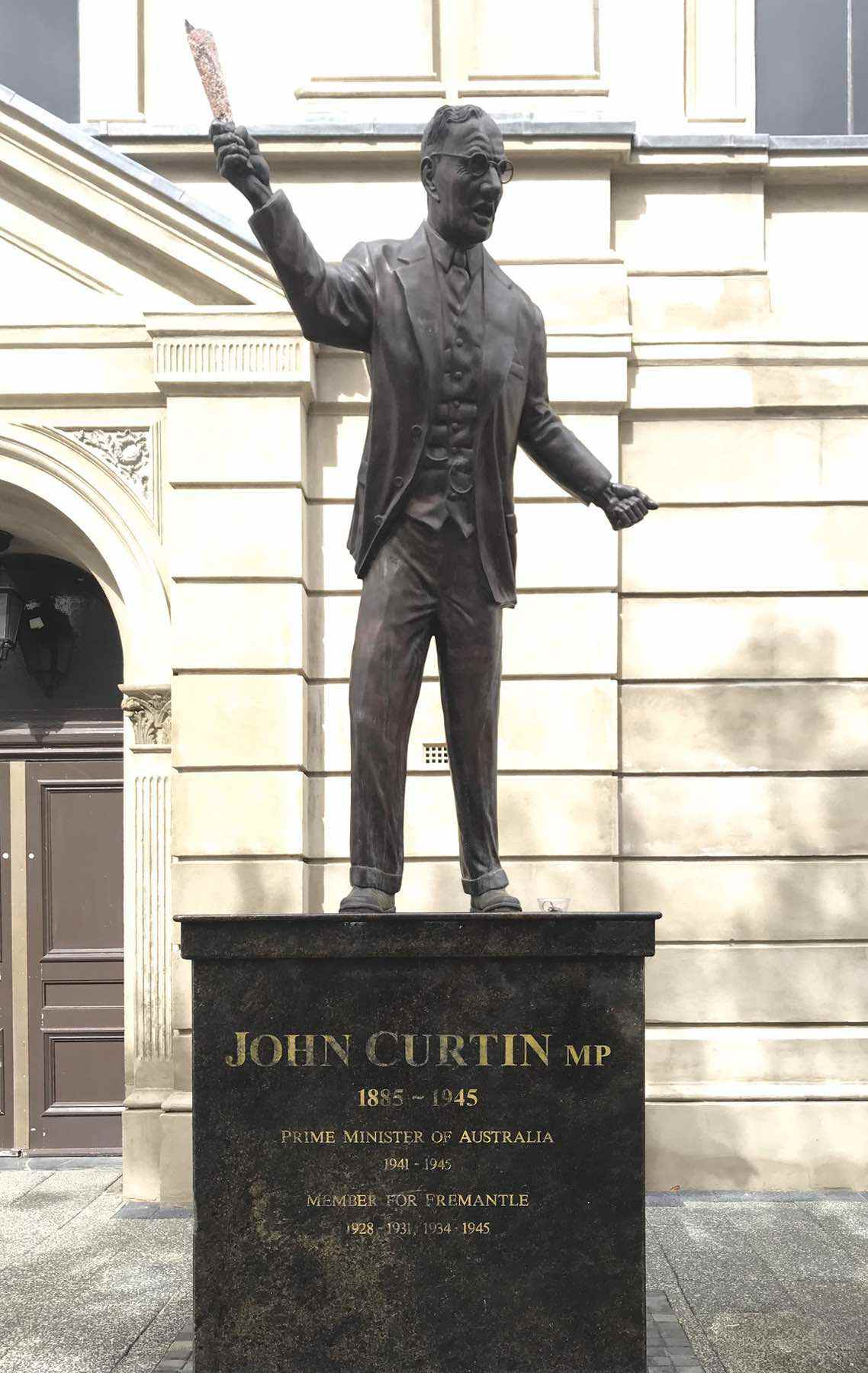 North Fremantle also has a War Memorial. It is on the corner of Harvest Road and Queen Victoria Street. The memorial is of a soldier, holding his rifle in a commemorate stance, facing south. The statue is made of white marble and stands on a stone plinth that is surrounded by a cast-iron fence.

This 1923 Memorial was originally erected to commemorate those from North Fremantle who had died in service during WW1. The names of those who lost their lives in WW2 were added later. There is a grassy park behind the memorial, with a flagpole and five oak trees.

On Preston Point Road, East Fremantle, just up from Canning Highway opposite Wolseley Street, you can find a Memorial Rose Garden. This park has several mature trees, a flagpole and a granite memorial with a bronze plaque dedicated to those who served in WW2.

In addition to these more formal memorials, in the centre of Fremantle’s Kings Square is a bronze statue of Air Commodore Sir Hugh “Hughie” Edwards. He was born in Fremantle and served as a bomber pilot in the Royal Air Force. He was awarded the Victoria Cross in 1941, and became the most highly decorated Australian serviceman of WW2. Later, in 1974, he was appointed Governor of Western Australia.

Today, if you pass by Sir Hughie’s statue, you will find his face covered with a surgical mask. In an interesting sign of the times: people are covering beloved public statues around the world with facemasks – a grim reminder of the world’s current battle against COVID-19.

Nearby, to Sir Hughie is a statue of John Curtin, who is widely considered to be one of Australia’s greatest ever Prime Ministers. He guided Australia through the darkest hours of WW2. He became Prime Minister in October 1941, two months before the bombing of Pearl Harbour. Sadly, he died in July 1945, six weeks before the end of WW2.

On 11 November 1918, the guns on the Western Front in Europe fell silent, signalling the end of WW1. Of all the thousands that enlisted in WW1 from Fremantle, 29 were Beaconsfield Primary School graduates. In 2015, the school received a grant to create a remembrance mural. The wall has rusted poppies and rainbow coloured service ribbons to represent and honour all service men and women who fought in WW1. The rusted poppies represent the passage of 100 years.

The many plaques, statues and memorials around Fremantle are an enduring reminder of the terrible sacrifices made by those who fought for our freedom and principles, so that we can live in peace and safety.