Tony and the pig fat

I met Tony, some moons ago, when I lived aboard an old wooden boat in the Fishing Boat Harbour. ‘Nikki’ was built in 1963, by the Sambrailo bothers, in Mews Road and spent most of her working life fishing around Jurien Bay, coaxed along by a Perkins diesel, the sort you’d find in one of London’s old double decker buses. Her high, flared bow happily ploughed Nikki through any seas.

Antonio ‘Tony’ Pozzebon was a diesel mechanic who kept most of the fishing fleet moving and Nikki’s old Perkins beating. He charged very little to bang around in the engine room for hours on end, I suspect because he was in love with the engine. He’d replace pipes, belts, fuel filters, change the oil and check the batteries. Over a period of time Tony and I became good friends.

He drove around in a small Toyota ute which carried an assortment of tools and engine parts laid on hessian cray sacks in the rear tray. His scruffy little dog, Susie, of mixed DNA would follow him everywhere. She would sit on a jetty for hours, staring at the hatchway to an engine room down which Tony had last vanished, listening to him tapping things and chatting to the motor.

Tony had migrated to Fremantle decades before when many Italians left their war-scarred country. They expanded the fishing fleet which became a mainstay of Fremantle’s economy. Tony was not a fisherman. When he arrived the fishing industry was at the end of its sailing days, becoming dependant upon diesel power and Tony, who had been apprenticed to a diesel mechanic, rapidly gained a reputation as the ‘go to’ guy.

The cray industry flourished in the early 1970s. Wealthy Japanese and Chinese customers enjoyed our Western Rock Lobster as, when cooked, it became the brilliant red colour associated with good fortune. The price of cray fish went from ‘ten bob a dozen’ to $40 a kilogram and with new prosperity fishing families built larger homes, leaving their cottages near the waterfront to be bought by an emerging artisan community.

Tony lived in a modest brick house in South Street, close enough to the harbour for him to hear the chorus of the fleet’s diesels as they thumped to life before first light. He was never tempted to build an Italianate mansion but enjoyed a simple life and went to extremes to keep it that way.

A collection of sheds and a car port, knocked up from salvaged tin and timber, were hidden behind the house. Their roofs connected to gutters and drain pipes, feeding rain water into tanks, helping the garden along during desert dry summers.

Tony saved everything, including flagons which may have held cheap wine in a former life. Now they stored his urine, used to fertilise vines and veggies growing along his fence lines.

One large shed was a workshop, its wooden benches camouflaged with oil and grease. To the untrained eye it was chaotic but like everything about Tony, deceptively well organised. Sections were dedicated to engine parts ranging from crank shafts, pistons, cylinder blocks, injectors and gear boxes, down to the smallest nut and bolt. Tony could build an engine from scratch if he had too. Tools were neatly parcelled in cloth, tied with string and divided into screwdrivers, spanners, hammers, wrenches, drill bits and other, mysterious tools he’d made over the years.

Old overalls would be cut into squares for use as cleaning rags. Some cut into thin strips and lashed to short wooden sticks – mops for dishwashing. Larger strips were bound onto broomsticks to make floor mops.

Tony lived in one of the sheds. I don’t know why as he and his wife were devoted. It was in a corner of the yard. An old steel sink was fitted below a window which filtered plenty of light and a row of home made dish mops were propped behind a single brass tap fed by the rain water tank. Hot water was ladled from an old washing cauldron which sat on top of a wood burning stove.

Other features of the room were a table of worn jarrah, square legged and covered with pages from The West Australian. Along the opposite wall was a small chest of drawers, layers of paint betraying its age. An old Bakelite radio, brown, with nobs and dials, stood among various condiments and cooking utensils. Jars of honey, jams and olives fought for territory as well as an assortment of well honed knives. At one end of the drawers stood an Electrolux fridge with rounded corners. Once white, now an uneven cream, it hummed happily.

A wall clock was suspended by wire from a small hook and, like the light bulb hanging from a wooden beam, and the fridge talking to itself, was the only other electrical appliance in the place. I suspected that time didn’t matter much to Tony, but Saturday mornings were important.

Frits Steenhauer, Jim Hall and I were invariably invited to join Tony for lunch. Summer or winter, rain or shine, we would rock up at Tony’s for Saturday.

Frits, an investment manager at UWA, and I had a common interest in wooden boats. We lived aboard our own as neighbours on my jetty in the Fishing Boat Harbour, each of us post-marriage.

Jim had been a neighbour in Attfield Street where I lived for a few years. He was tall, rough shaven and appeared to be of Italian origin. He was an orphan adopted by Mr and Mrs Hall. Mrs Hall was born in Fremantle Hospital in 1900 when it was little more than a wooden building, The Knowle. Jim was devoted to her, worshipped her. He also worshipped his pigeons, tumblers, which he bred in cages sheltered from hot summer sun by the large olive tree at the bottom of my garden. 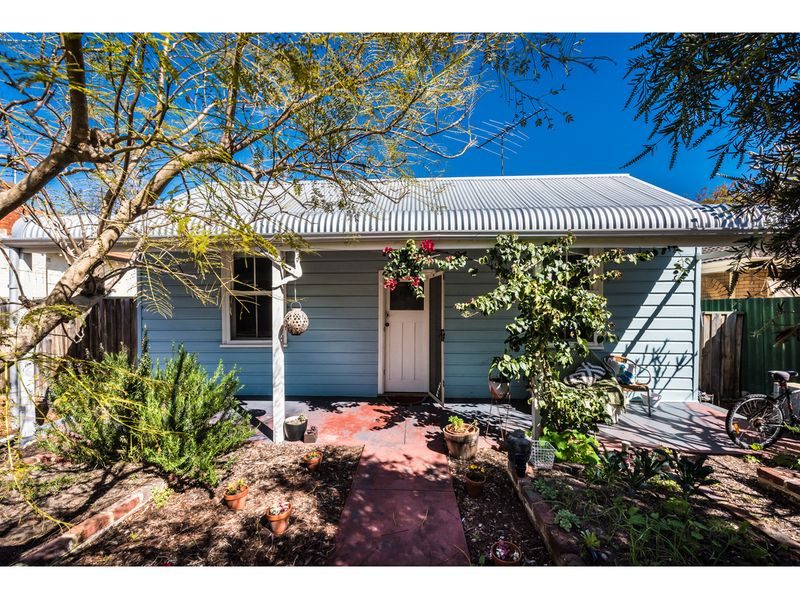 Jim worked in the abattoir, a few minutes ride south on his old motorbike, where he’d spend his days killing pigs. Apart from that he was a gentle guy, an easygoing neighbour who’d swap vegetables over the garden fence and, now and then, give us a couple of bottles of his homemade beer. It was good but Jim added a little too much sugar. One night two bottles exploded. Shards of glass were embedded in kitchen doors and other woodwork. Other than thinking we were lucky not to have been in there at the time, we decided that in future we would make our own beer.

Jim spent his holidays in the goldfield’s town of Kalgoorlie. He went there for about three weeks a year and made no bones about the fact he bonked himself silly in the Hay Street brothels.

Lunches with Tony were special. Clean newspapers covered the table. Saxa salt in plastic shakers – the one with the red label, pepper, vinegar and other bits were placed in the centre. Clean white plates, a little bit chipped, were set out, as were wine glasses. Nothing flashy.

In the corner of the shed a wood-burning Metter’s stove blasted out heat summer and winter. In the summer the door and window were left open. Susie would camp in front of the cooker in the winter. On the stove a five litre aluminium kettle invariably steamed away alongside an aluminium pot filled with simmering pig fat.

One Saturday morning Jim arrived carrying a large pig skin, folded lengthways, hefted over his shoulder. Friday must have been flay day. It wobbled as he walked and squelched when he dumped it onto a length of sacking on the concrete floor. Tony took a large knife and sliced the hide into strips, put some into boiling water and the rest into a large laundry basket, a blubbery fly trap. This process went on for hours. The fat would be skimmed from the top of the pot and stored in bowls, cooled and put in the fridge. This was Jim’s contribution to our time together and was the key to the crispy fried food.

Tony would most likely have been fishing the evening before, or early that morning, while the air was cool. He would have caught a seasonal assortment: tailor, mackerel, herring or whiting. They were brought home, gutted on the jarrah block reserved for the purpose and washed in rainwater. There were also chicken legs. I don’t know where they came from. Maybe from Jim who kept a few chickens alongside his pigeons. He’d frequently hand eggs over our garden fence and the only thing he asked in return was to harvest ripe olives from our tree. All neighbours cherished the fat black olives. Occasionally we’d hear a knock on the back door, a neighbour bearing a couple of moderately under-sized crayfish, a form of local currency handed over in appreciation.

Fish and chicken were our regular bloke’s lunch. Tony immersed fillets of fish and chickens’ legs into the simmering pig fat, retrieving them a few minutes later, golden brown and crispy and serve them alongside slabs of warm, crusty, bread which I suspect was made by Tony’s wife in her kitchen. Lashings of butter oozed through the bread and we pecked at the large crumbs scattered over the newspaper.

Tony also made red wine. It was stored in flagons which bore an unsettling resemblance to those in which he kept his ‘fertiliser’. It was undrinkable, but Tony had a solution: a large tea pot filled with cold, black tea to which he’d added a lot of sugar. The trick was to mix the wine fifty-fifty with the cold tea. Against all odds the combination was highly quaffable, a miracle of biblical proportions. We drank too much, laughed a lot and told lies about ourselves. Jim didn’t much like the wine and tea combo so would bring a couple of bottles of his beer along, which made me nervous. I’d seen them shred doors.

Tony died about 18 years ago. His coffin was the size of a small car, beautifully varnished and fitted with gold handles. It would have weighed a great deal more than Tony and the team of pall bearers struggled along the pathways of the cemetery to a fresh grave where a mound of earth had been covered with artificial turf. His funeral must have been one of the grandest Fremantle had seen. Pretty well everybody in the fishing industry put in an appearance on that blistering afternoon and Tony was sent on his journey with more ceremony than a Pharoah.

Fritz died a a few years later. Another legend and friend to anybody with a wooden boat or even a liking for wooden boats. His memorial is the small Fremantle Cruising Yacht Club which he established in Challenger Harbour. I still ride his old bike around town.

Jim died a few years after his adoptive mother, probably from a broken heart. He carried on breeding pigeons but lived alone in the Attfield Street home. He was often seen walking up and down in his garden, releasing tumblers to perform their aerobatics.

Similar times don’t seem to exist in the town any more. Tony, Fritz and Jim have gone. The abattoir has closed, so have Kalgoorlie’s brothels.

I’m still ahead on points! 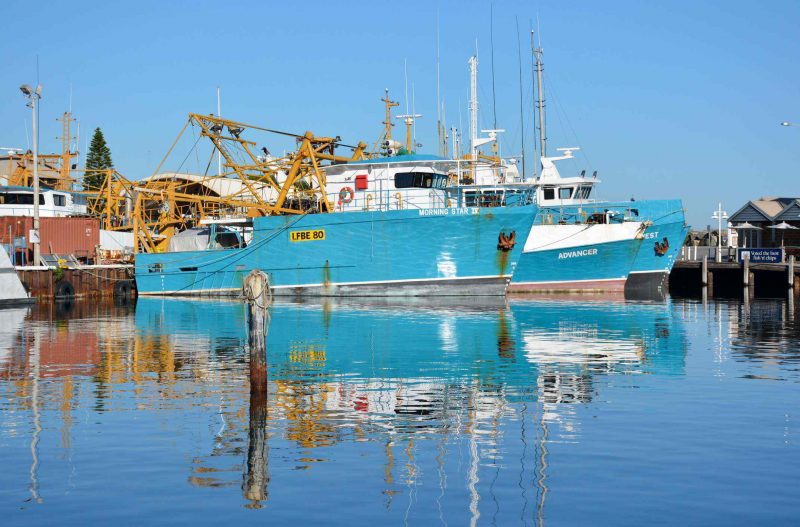