We can’t say that we, at FSN,  love speed humps, but we do love that the recently installed speed humps in South Terrace have got us talking about them; more particularly, about the future of South Terrace between South Street and Douro Road – the beating heartline of the South Freo Village – once the humps are no longer needed to slow traffic in this popular strip.

People of all shapes and sizes walk South Terrace; cars, utes, trucks and throaty motorcycles, and bicycles, traverse it; CAT buses run down it nearly every day of the year. How South Terrace should look, feel and function in, say, 10 years from now is a topic any local, and many foreigners, will quickly and easily engage you on.

All traffic brings safety challenges; no doubt about it. The narrow streets that intersect with South Terrace help sustain the sense of a Village, but also make traffic and pedestrian movements in the locality more hazardous. The act of crossing the strip by vehicle, bicycle or foot can quickly turn into a game of Russian Roulette. The prevailing and received wisdom is that if we slow the traffic, we reduce the hazards.

No one is suggesting, not yet anyway, that South Terrace should become like Centro in Sienna, and that we ban all vehicle movements. But there is a strong sense that we must reimagine and redesign South Terrace in ways that befit South Freo’s Village status and keep it commercially vibrant – and safe to all users. The challenge is not so different from the challenge that faces central Freo.

One reason South Terrace is so popular, is that it is what it is, an organically developed strip that doesn’t appear to owe anything to a conscious process of urban planning. Like South Freo more generally, almost anything goes. If the reimagining of South Terrace, after the ‘temporary’ speed humps go, reflects the surrounding Village, the result will be an eclectic design and use mix having a distinctly South Fremantle flavour. Maybe the light poles will have to stay, as symbols of a non-conformist South Freo past and present! 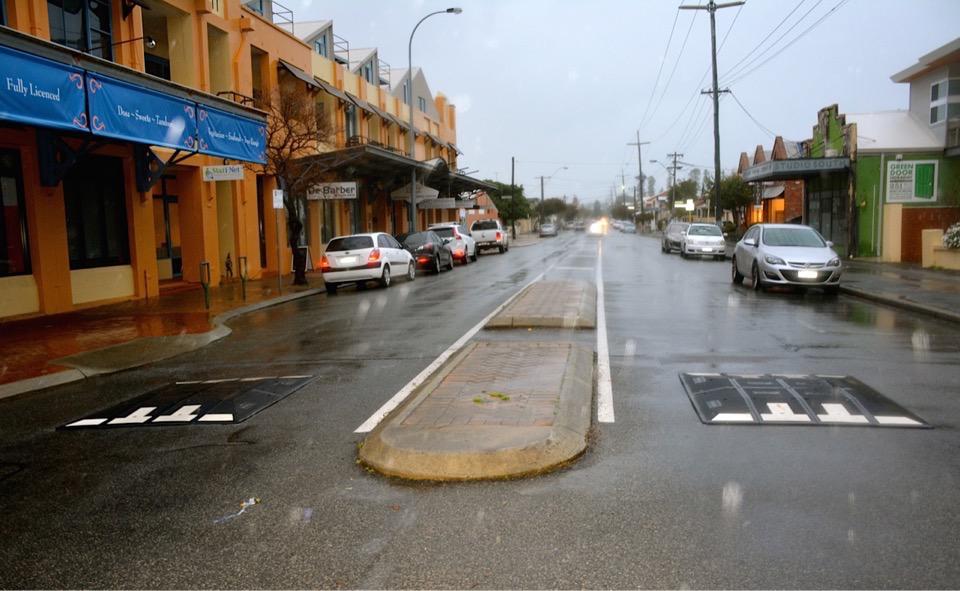 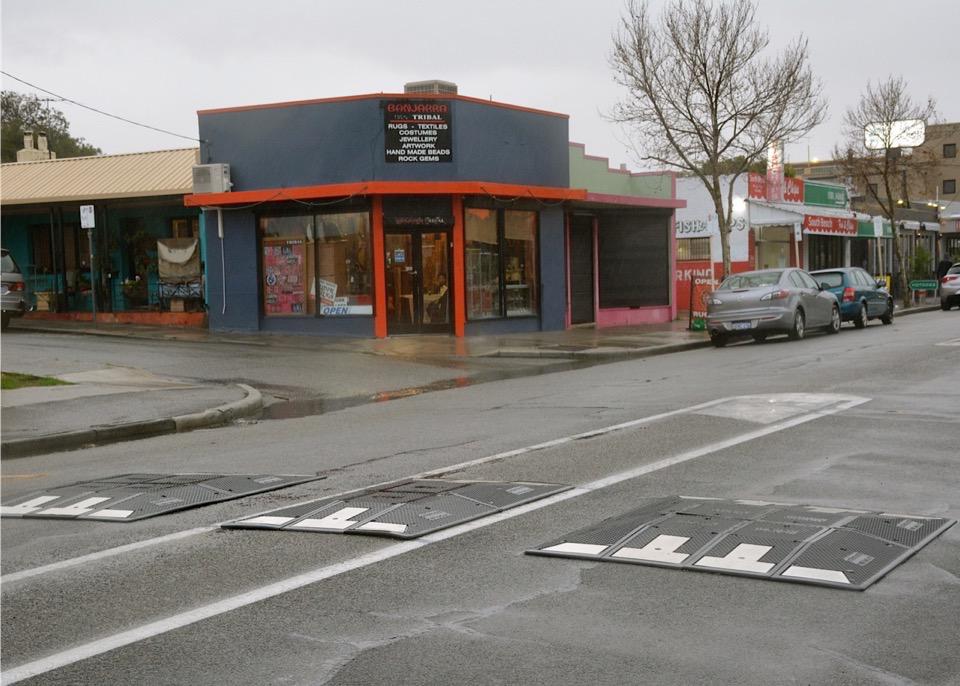 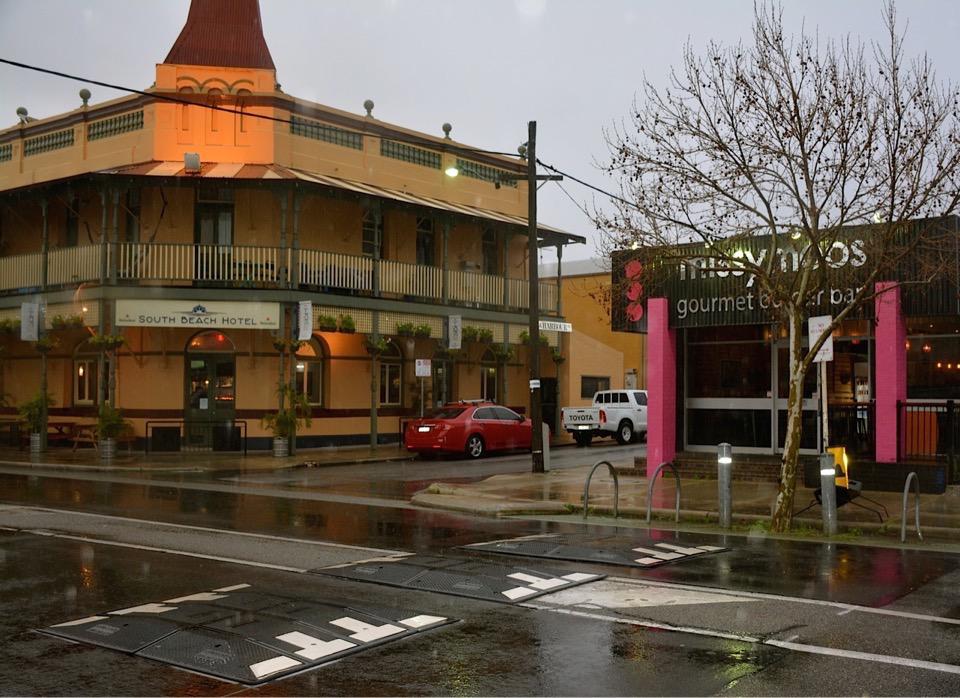 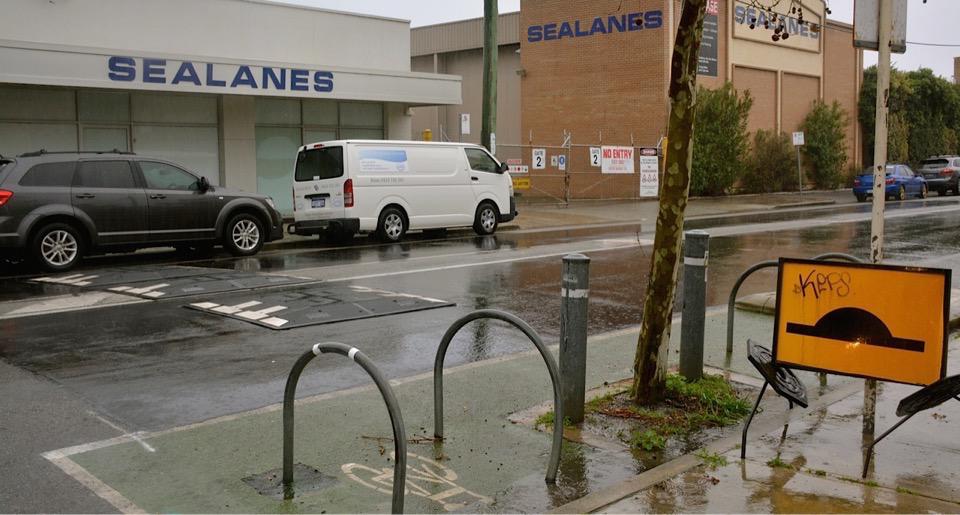 But there is room to redesign road contours, introduce clever road finishes and landscaping, and retain kerbside parking in ways that transmit to all users of the South Street to Douro Road precinct the clear message that they have entered Village territory and need to slow down – just as its residents like to!

In 2016 a community meeting began the reimagining process. The City now says-

• Speed humps on South Terrace deliver an interim solution while permanent traffic calming and streetscape upgrades are developed and finalised.
• By slowing the traffic down initially, the City is in a stronger position to advocate to Main Roads (who control speed signs in WA) for an official speed reduction on South Terrace.
• The City is currently working on its first targeted area for the permanent scheme which will include a ‘slow’ speed node and footpath build-outs on South Terrace at the intersections with Little Lefroy Road and Sydney Street.
• This permanent solution is also likely to include footpath upgrades, landscaping improvements and street furniture and is scheduled for delivery as part of the 2017/18 City works program.
• In response to community feedback, the City has removed five of 15 speed humps as well as introduced a central speed hump to prevent cars from weaving to avoid the humps.

The Ward Councillor, Andrew Sullivan recently explained, in Freo Massive, that the point of the exercise is to slow speeds down sufficiently so the City can gain State Government approval for a permanent lower speed limit. He says speeds have been dramatically reduced. What, he adds, is needed now is community support to get the permanent, more subtle, urban design solutions funded by Council and implemented by the City. No doubt he is right.

What would be great to see now, though, is Council’s detailed plan for a reimagined South Terrace informed by community thinking. Without a plan the temporary speed humps, like a temporary tax levy, may regrettably become permanent and part of a limited urban planning response to a significant urban planning issue.