The City is a unique window of our past, 19th century Gold Rush days, of the social outcomes of 20th century World Wars, of the streams of migrants landing at Fremantle Port, their doorway to the great continent, energising Fremantle by their dreams of abundant life, their industriousness and their will to succeed. We must cherish and continue to celebrate the exuberance of Fremantle.

Walking the streets of Fremantle, whether in the City’s Centre or the satellite suburbs of East and North Fremantle, Hilton or North Cockburn, the imprints of history are palpable, when encountered by the imaginative facades of the original 19th Century commercial centre of Fremantle’s West End and manor, early 20s cottage, or a picket fence, stone wall, aged garden or mature tree.

In Fremantle, all manner of lifestyle have left their mark – the transported convicts in the stone and mortar of such iconic structures as the Roundhouse and Fremantle Goal, the laborers that built Fremantle Port in the simple cottages; the merchants and functionaries in their stately ‘colonial’ and ‘post colonial’ houses; the gold prospectors in fine Edwardian and Victorian edifices, hotels and merchant houses, many more lining the City Centre streets – Market and High Street; European migrants – Portuguese, Slav, Italian and Greek; and tradesmen, builders, sailors and fishermen.

There are other histories, yet to be fully acknowledged – of the original Noongar inhabitants. Until we do, those hidden imprints will continue to haunt us; their living descendants still traverse, often barefoot, their traditional land, oblivious to the concrete and asphalt now under their feet and ‘western’ signifiers of shopfront, commerce and street culture.

Our challenge remains as to how to best preserve these traces of the past.
In the current information age, we almost instantly connect, identify and share experiences with places and people all over the planet. We are drawn to places that show a clear identity of character and those most layered in history. These are also natural places, not man – made. Fremantle abounds with well cared for natural landscapes along its river and ocean shores that carry the marks of time – from its limestone cliffs and coastal flora to the myriad shells washed up on its shores. Its streets and buildings are packed with stories that speak of adventure, trial, global history, pluck and exuberance. In the West End, Mouat Street the Tarantella Building – designed by an American architect, built in the Gold Rush days, boisterous in its mixed Queen Anne Revival style, at the break of WW1 inhabited by a German Consul soon standing accused of spying on shipping at Fremantle Port.

Whether natural or man made, the places that draw us have integrity and authenticity. Heritage conservation informed, in its assessment of value – based on integrity, authenticity, rarity… Fremantle is packed with such treasures. 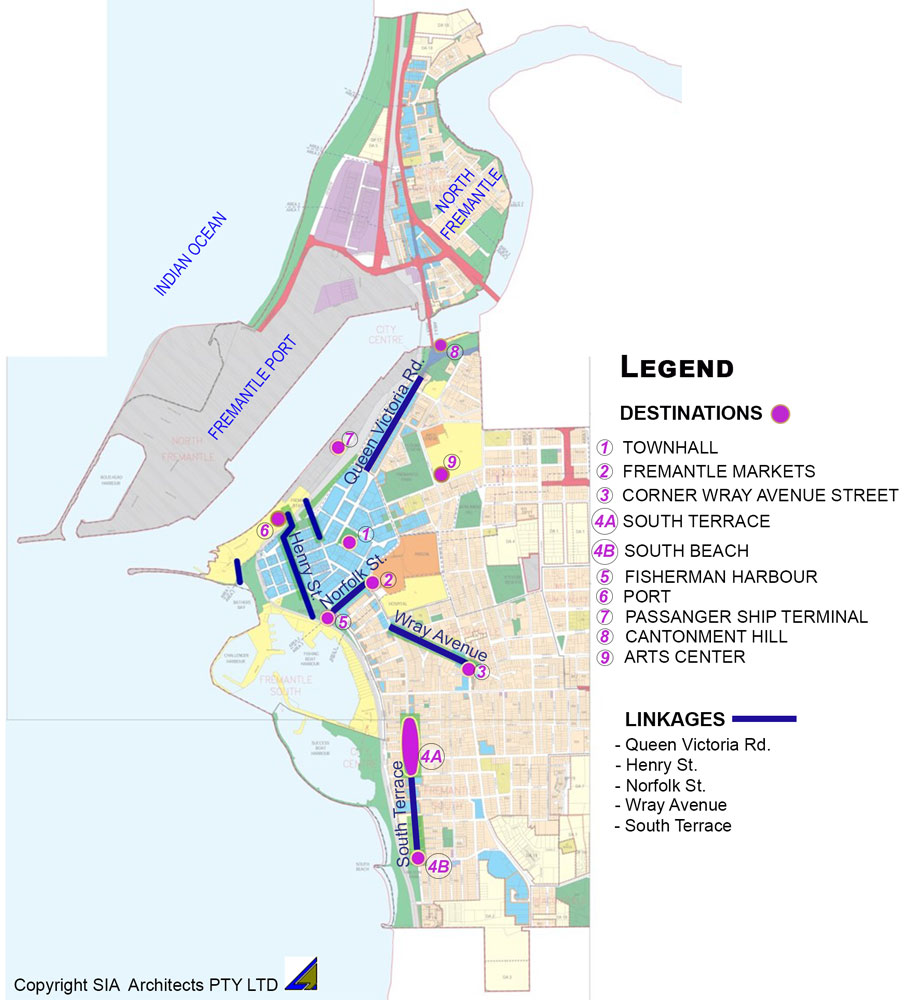 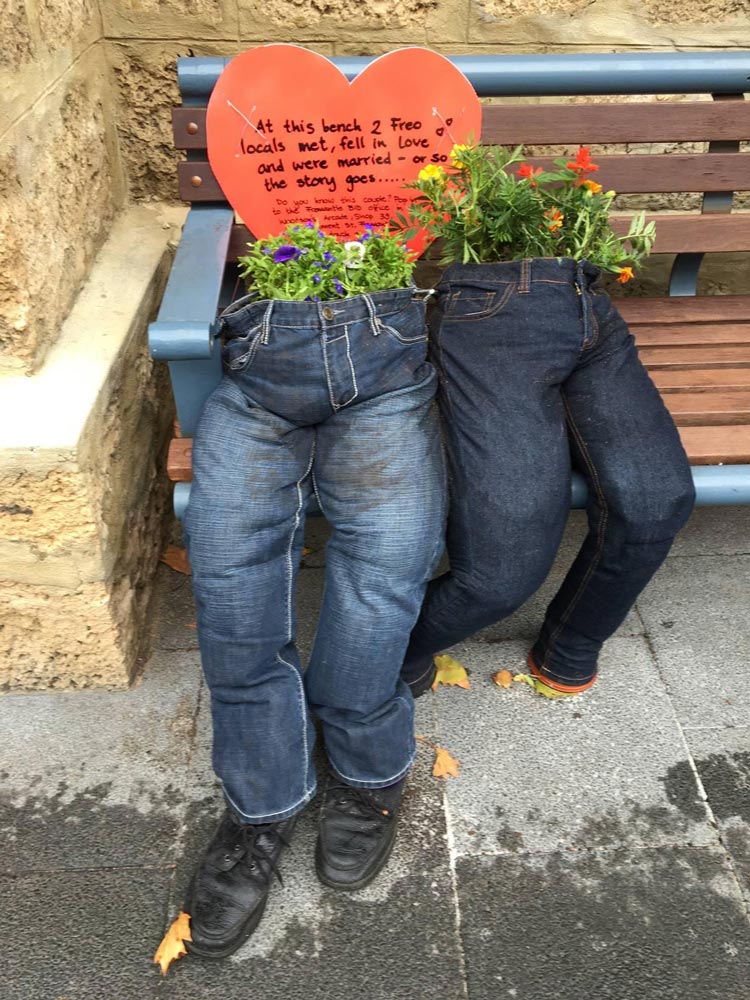 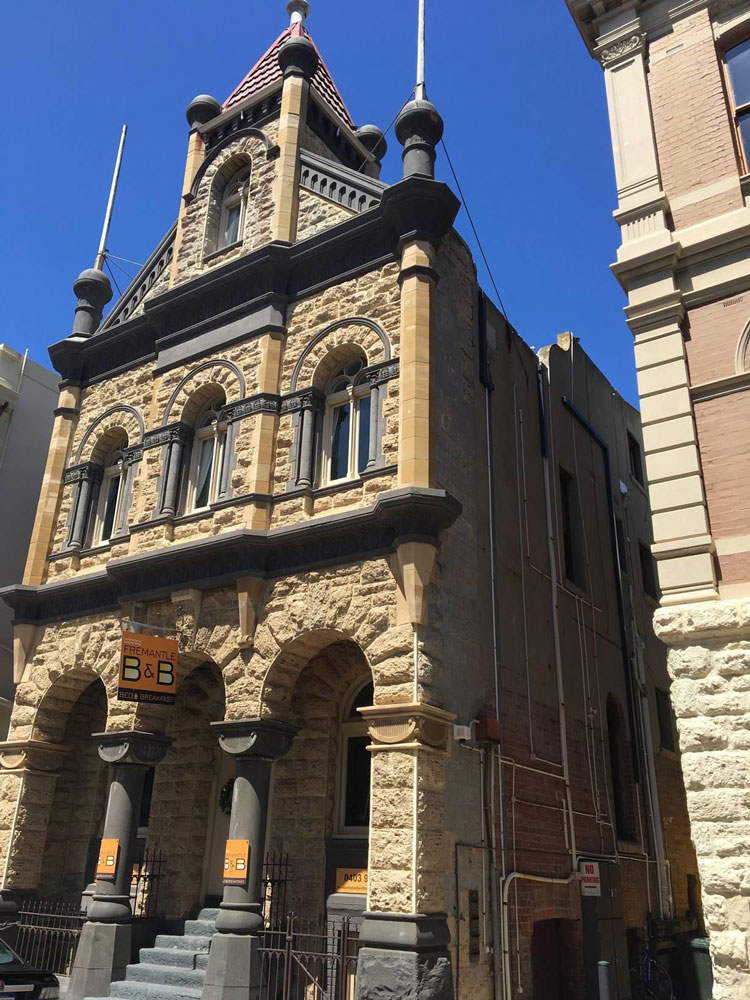 It has been said that in a life’s journey, what matters most is how we get there…
Fremantle has many wonderful destinations – as Richard Longley has well identified in his recent account for Fremantle Shipping News. Our experience of destinations is substantially defined by the journey to and between our destinations, the journey an opportunity for adventure and discovery, finding interest or drama, surprise and delight.

Fremantle offers heaps of travel experience, getting to and across the City – with the Port with its cargo ships, its ocean cruisers, trains – passengers and cargo, ferries to Rottnest Island and Perth CBD, buses. There are private cars cruising for parking spaces and there is walking, bikes and bicycle. One will encounter all types of personal transport – two and three wheel, electric and pedal power, baby, pet and shopping carriers, bicycle trailers … tricycles; even Fremantle style rickshaws. Single or in packs, lacro swarms, Vespa herds and leather clad bikies cruise the Cappuccino Strip.

Like most prosperous cities with growing populations, traffic is a tangle… There are solutions – pedestrians, bicycles and ‘small scale’ personal transport need to come first. Amsterdam is a good example of that. Painting the road green to delineate bicycle lanes, more frequent traffic lights and pedestrian crossings, perhaps the first step. A holistic solution will place car parking and inter suburban bus networks at the periphery of the City Centre streets, with easy walking distance to city centre and include shuttle (and not only for tourists) mini buses moving between city centre and parking stations, ferries, railway station and ocean cruisers’ terminal… inner city parking offered only on special permits.

Once ‘landed’ for visitor or local, the city image is a factor of personal and social identity. Our ‘abstract’ belief in civic pride and clarity of purpose needs physical form; getting around Fremantle, finding our way to its attractions calls for visual clarity and expression.

For way – finding in Fremantle, as in great cities of the world, the city’s main arteries demand expression of a refined and definitive urban character. Victoria Rd, Market Street, Norfolk Street, Henry Street, South Terrace and others, need be ‘legible’ by design and be clearly ‘read’ as the (pedestrian/personal transport) arterial streets of the City. To be visually identifiable, either one or several unifying, urban /street scape design themes would be the outcome of good design and be populated by well considered ‘public space’ artifacts –seating, public art , signage bins and planting themes. We see increasingly a good choice of well considered street furniture, art objects and planting, perhaps applied at random. Unifying themes are yet to come, to express an existing underlying urban hierarchy that is referenced to the city’s major destinations.

The city is also prolific in its repertoire of temporary art and crafts installation, pop ups, buskers, street markets, music and theatre performance. Much of it remains an odd fit. Perhaps the temporary and the ephemeral deserve recognition, in a civic sense. ‘Unique’ architect designed homes and the ‘architecture without architects’ – self ‘builts’ are there to be discovered. Alternative activities and build form to the ‘norm’ are places of freedom and represent a healthy counterpoint to the cultural narratives that ‘establishment’ culture promotes.