The UN of Football

Take a drive towards Fremantle along South Street on a typical sunny late Saturday afternoon. From the junction of Carrington St down the long descent, to Lewington St, before the car starts to climb up to Edmond Street and the first glimpse of the shimmering Indian Ocean, before all of that on the left is an expanse of grass and on it you will almost certainly see bunch of men and boys playing soccer in the shade of the giant fig trees that is Bruce Lee Oval

No one is really sure when the game started. There are a few veterans, those over the age of sixty who can remember playing as sprightly forty year olds, back in the late 1990’s. Most of the originals have gone, moved interstate, succumbed to injury or are just too old to run around in all weathers screaming, “Will you please stop stuffing around and pass the ******* ball!”

Perhaps this game is a unique Fremantle institution. Unique because there are no fees, no kit, no home and away fixtures. No linesmen, or referees and no real marked out pitch as such. It is played on the wettest and the hottest days of the year and all year. The only prerequisite is to bring two shirts a coloured or a white one and of course a ball if you have such a thing.

And then there are the nationalities. And what a brilliant, diverse, eclectic bunch are represented, from all corners of our amazing planet. Blokes from Brazil, Peru, Chile, Spain and France. England, Italy, Germany and Holland. Iraq, Iran, India and China. Somalia, Sudan, Sierra Leone and of course Australia to name just a few.

Commands are bellowed in sing song Spanish, elegant Swahili is whispered. Guttural German barked. The French reason with, the Italians pontificate, the Portuguese roll their letters and of course the glue, the binding English language, in which suggestions are made that never should be learnt by incoming migrants, or muttered with mothers and children around. 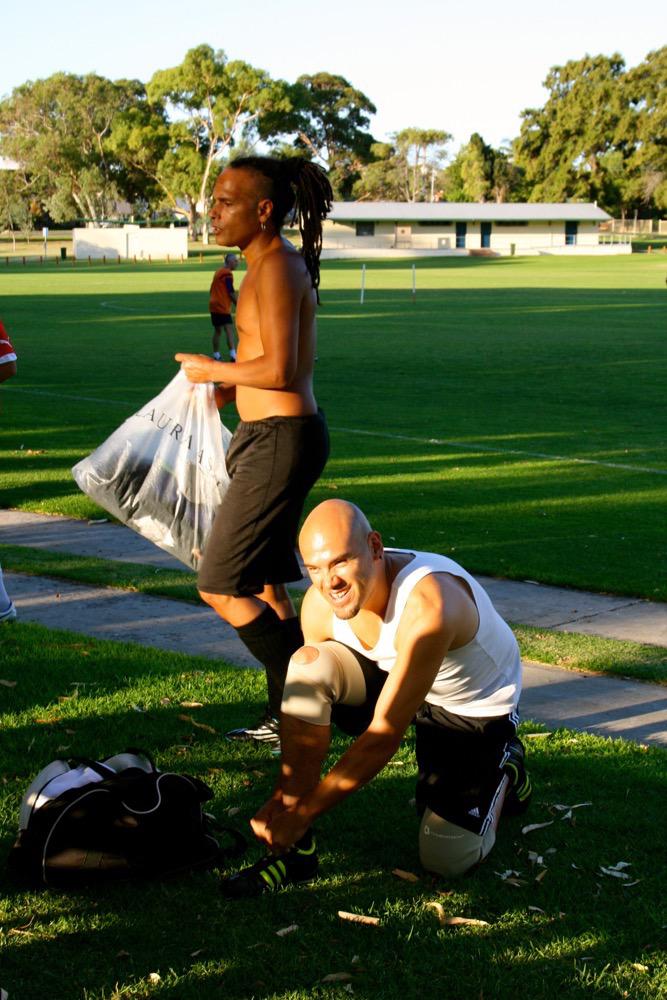 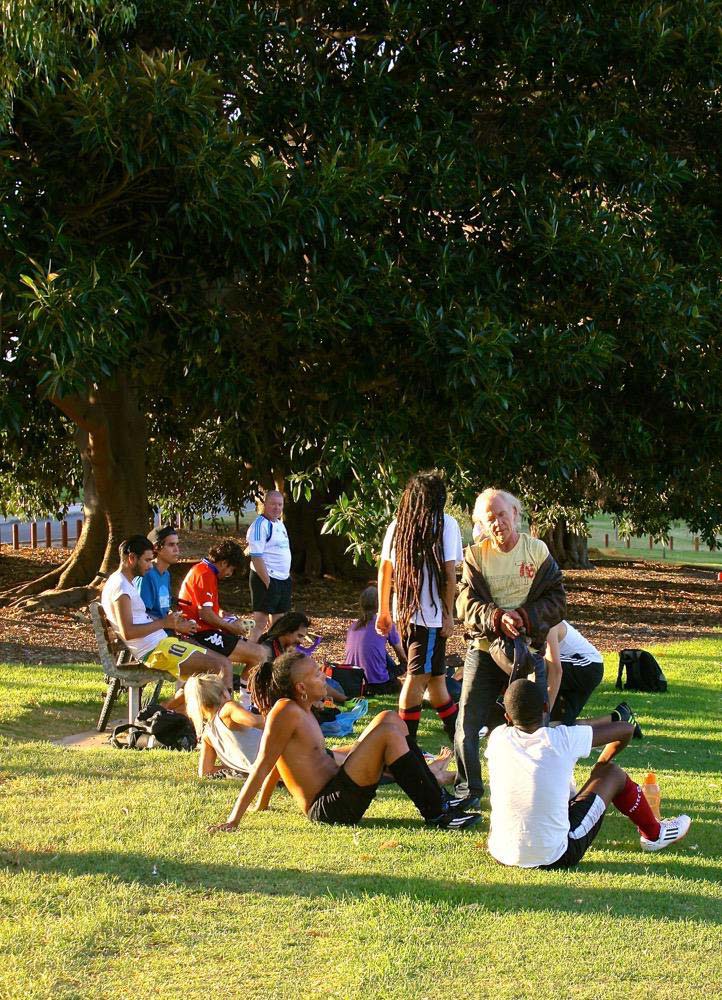 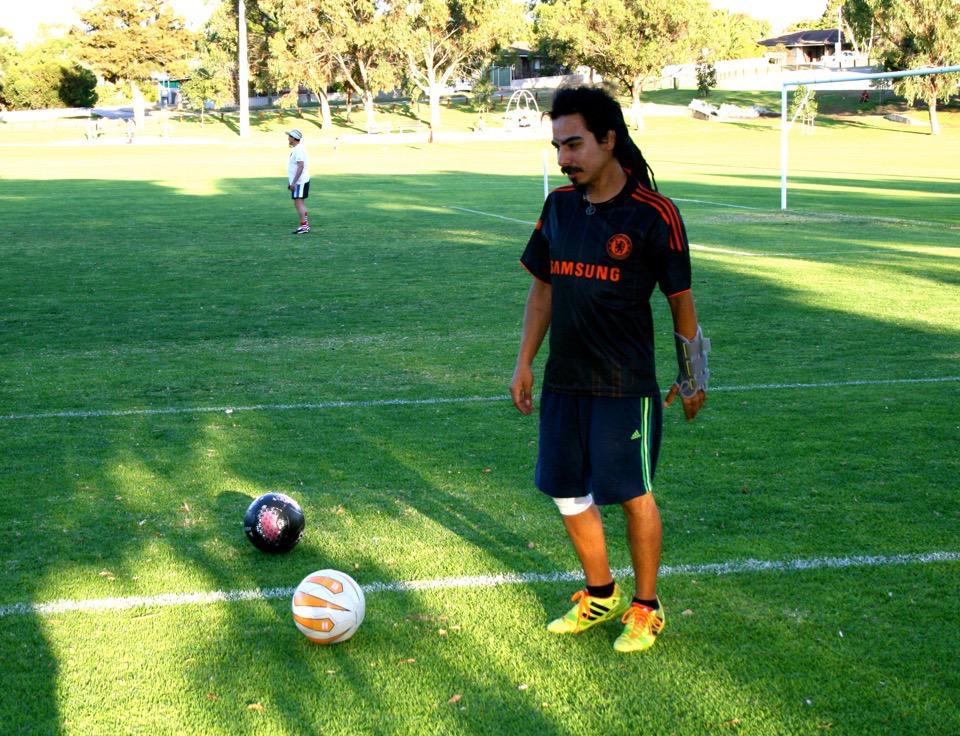 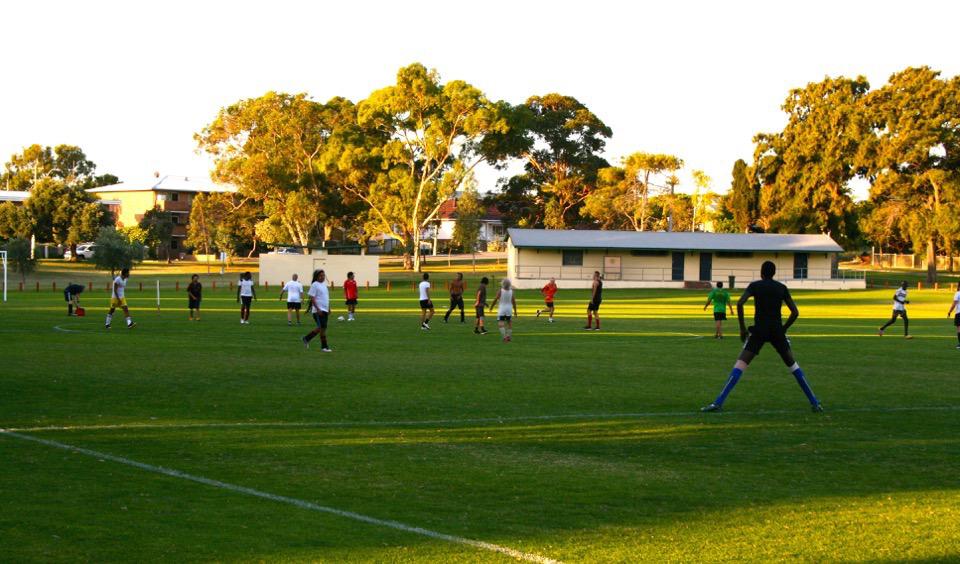 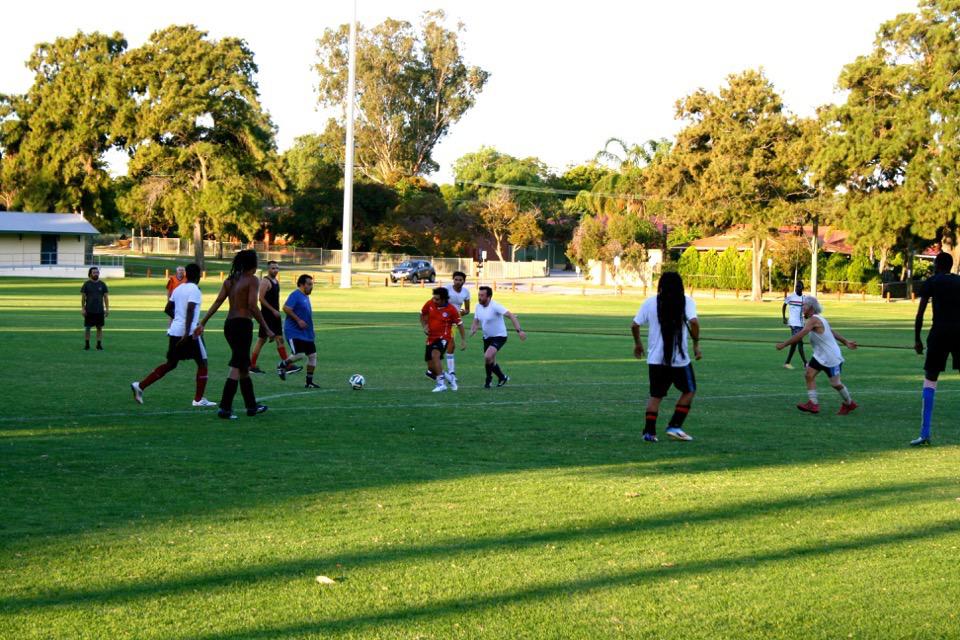 From their respective worlds, some escaping poverty, war and corrupt dictatorships, some just seeking a better life they bring with them their different styles of football, inherited from generations of lovers of this universal game.

The South Americans are brilliant, dazzling, quick and inventive. The Africans are athletic and mercurial. The Europeans, structured and technical, and the Asians and Australians, a mixture of all of the above.

There have been some classic moments over the years, some unforgettable games. The occasion a man suddenly appeared in the middle of a match running for his life, chased by two portly cops. The game came to an abrupt halt and everyone clapped and cheered, encouraging the villain to get a move on. Someone even suggested passing him the ball, so he could have a shot at goal. He was caught of course, in the penalty box, much to the disappointment of the attending crowd.

Then there was the mini bus that arrived and out jumped twenty or so Koreans and challenged everyone to a game. The challenge was accepted of course.

No one who turns up and asks to play is ever refused a game. Youngsters are welcomed, as are those who have never kicked a ball in their life. Fathers have played with their sons to an age when their offspring drift away with other interests, only to come back on occasions for a kick around.

It really doesn’t matter how good or bad you are. What matters is the game. A moment someone tries a completely ridiculous move that puts him on his behind and the whole team erupts into spasms of laughter. Or a pass that is inch perfect and allows the receiver an opportunity to weave to the left and feign to the right and finally score.

So what is so uniquely Fremantle about this casual kick around? It is as warm and welcoming as the doctor on a hot afternoon. It never judges, but if you hold on to the ball for too long, be warned. You can leave and return months, years later and will always be accepted back with open arms. It gives a sense of belonging, regardless of race, religion, age or sex. It is Fremantle.

So if you happen to be passing Bruce Lee Oval on a late Saturday afternoon and you see a bunch of misfits kicking a round ball around, lean out the window and give them some abuse. Or better still, pull over, jump out, run over and join in the game like I did all those years ago.