Mark Naglazas stops and smells the food on one of Fremantle’s iconic pine tree-decorated streets.

When wandering down Norfolk Street I am usually so deep into discussing the film I had just seen at the Luna on SX — “Who would have thought Germans could be so funny!”— I take in little of what’s happening around me.

My regular post-picture patter was disturbed recently when I paused long enough to notice the verandah of a colonial cottage overflowing with people drinking wine and cocktails and eating dishes that were landing on tables with Top Gun-like speed and stealth.

The destination that was drawing so much traffic was Nieuw Ruin, a wine bar that I later learned had generated so much buzz since opening a couple of years ago it has grown from the coolest place in Fremantle to drink cocktails and “weird wine” (their description) to something approaching a full-blown restaurant. 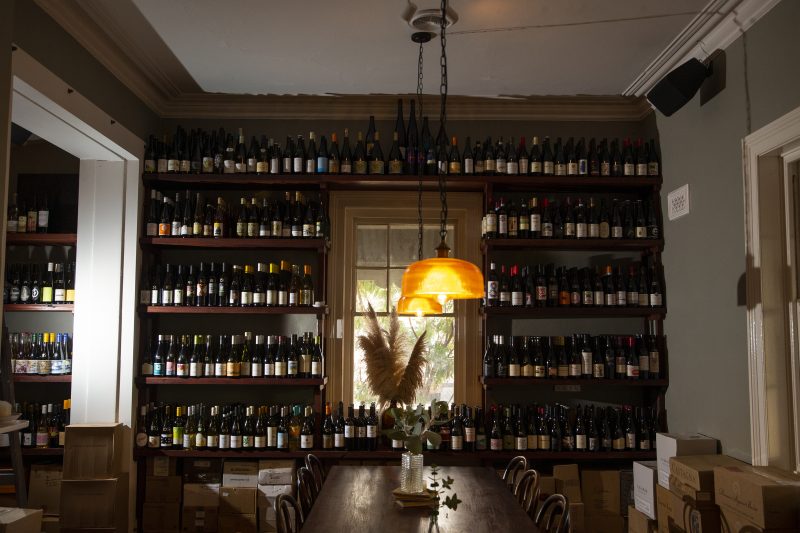 A table on the verandah was available so we traded movie chatter for food talk while looking over the wine list, which is indeed as strange as the owner promised (a shiraz called Ladies Who Shoot Their Lunch and a dolcetto called Dead Winemaker’s Society sound more like upcoming films than anything you would want to drink), and a menu full of promise and requiring a bit of googling (Olasagasti anchovies? Itakuja chocolate cake?).

While the food is mainly there to support the eye-popping wine list the relationship is clearly in the process of being reversed as the cooking of award-winning young chef Blaze Young (her previous gig was Madalena’s, another Freo foodie hot spot) is becoming as much a magnet as the exotic stash of booze.

Our first taste of what Young has described as “home-style cooking with elegance” was Wagin duck liver parfait, spiced prunes and toast ($14). It was certainly simple, but the execution was impossible to fault, with the sweetness of the prunes cutting through the rich creaming texture of the velvety duck liver parfait and begging to be spread on the charred sourdough bread. 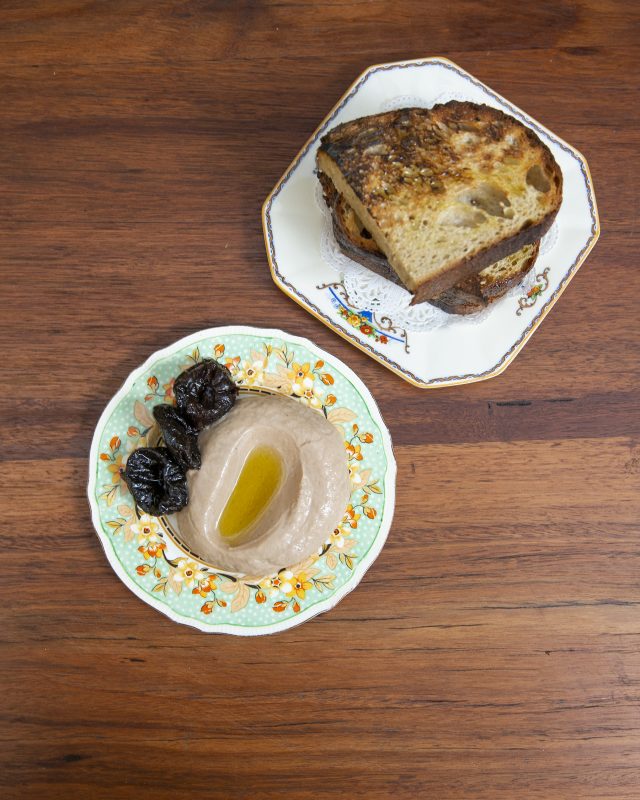 Then came the star of the afternoon, confit dhufish and charred fennel cooked in brown butter ($22). It was simply one of the tastiest dishes I’ve ever eaten. The fish was melt-in-your-mouth delicate and enhanced by the smokiness of the fennel. It was so delicious I was finger-licking the sauce as the plate was being whisked away. 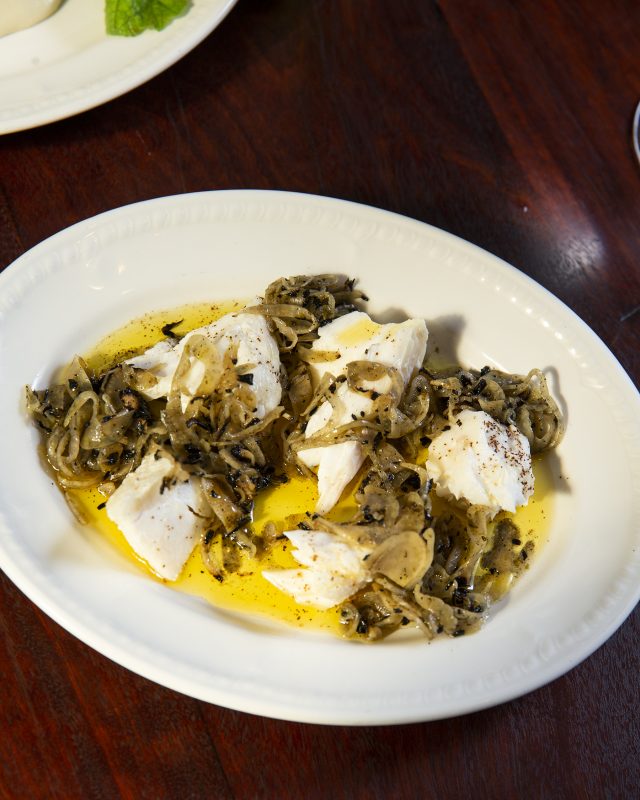 After the subtlety of the dhufish the beef cheeks and potato gratin ($38) was a flavour bomb, a classic winter-time dish with slow cooked meat falling apart on the touch and a sauce so rich (perhaps too rich for some) I wish I’d ordered bread for dipping. ​

The second sensation of the meal was the baby carrots and goat’s curd ($19). The carrots were roasted in honey, sprinkled with coriander and presented on a bed of creamy goat’s curd, which cut through the sweetness of the carrot with a sharp tang. And so colourful was the presentation, the juices were flowing before the first bite. ​

Most of the action on the gorgeous Sunday we dined at Nieuw Ruin was on the verandah, where the sunshine and pines and the constant flow of passers-by made for a perfect Fremantle afternoon. In between courses I took a peek inside, where the dark timbers of the lovingly restored cottage showcase the walls of wine that must make this the happiest place in the port city on a cold winter’s night.

Back on the verandah Itakuja chocolate cake with hazelnut cream ($15) was waiting but sadly not coffee. One of the staff explained that Nieuw Ruin had evolved so quickly from a wine bar that served a bit of food to something close to a fully fledged restaurant they hadn’t yet added coffee into the mix (and, I guess, the Cappuccino Strip is just around the corner). The cake, by the way, was amazing, fudgy with a deep cocoa flavour instead of the usual sugar rush. 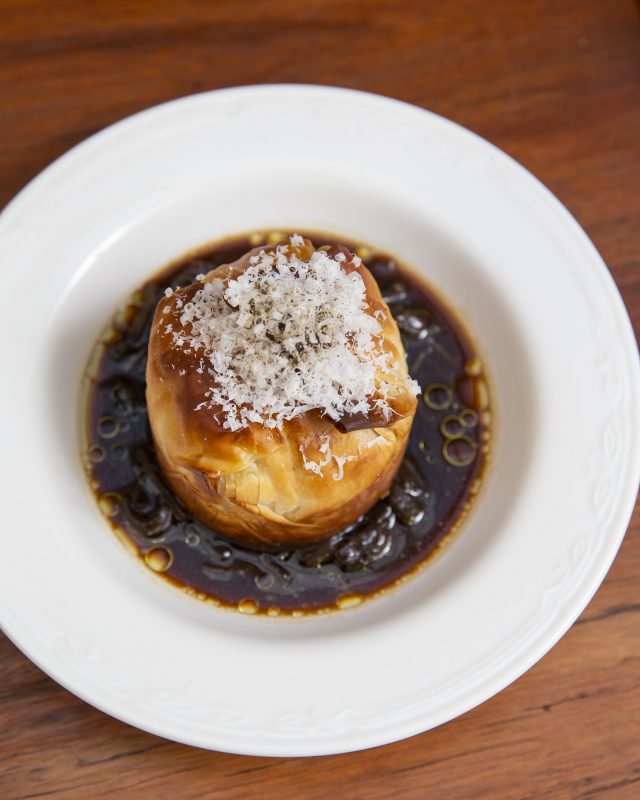 While leaving the restaurant we were approach by a couple as discombobulated as survivors in a post-apocalyptic drama. “Can you tell us where Nieuw Ruin is?” they asked. “You’re standing in front of it,” I replied.

Clearly, the team at Nieuw Ruin are far better at making food and serving drinks and coming up with a memorable name (it is a combination of the Dutch word for a new style of gin — “nieuw jenever” — and “mother’s ruin”, which is old English slang for gin).

That will change as word spreads about the quality of the food and the first-class service, which will no doubt be disturbing — in a good way — to my future post-screening walk-and-talks down Norfolk Street.

Here’s where to book.