Carmel Mullally, the last remaining resident of what had been a substantial North Fremantle community west of the railway line, died at the age of 89 on 11 February 2022. She had lived in her simple weatherboard cottage at 28 Bayly Street, close to Port Beach, since 1948. Formerly a street full of families — at least 30 homes with 52 people lived there – all save hers were resumed and demolished to satisfy the expanding Container Port’s insatiable demand for land, roads and rail. But Carmel was not to be easily evicted. 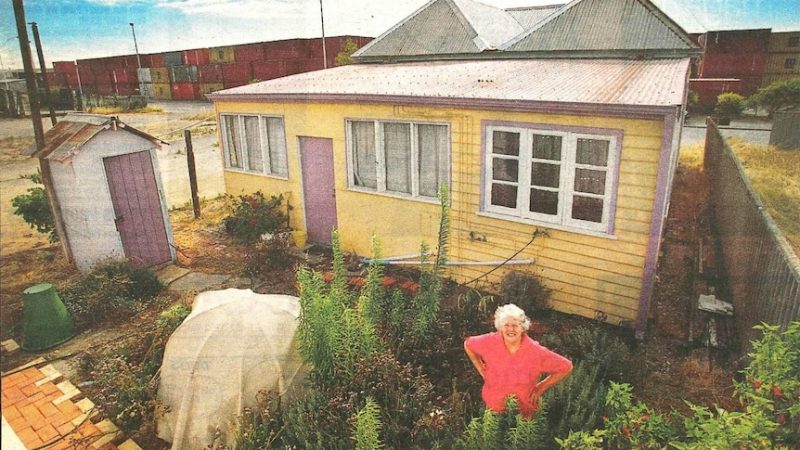 Carmel had studied Commercial Law in Melbourne, and while she didn’t take her case to the High Court, the spirit of ‘The Castle’ ran strongly in her veins, resisting resumption orders, the last in February 1990. Kerry Sanderson’s appointment as CEO of Fremantle Port’s that year seems to have brought an end to the standoff. Thereafter her presence was accepted, even fondly as an example of the Port’s generosity.

The growth of the Container Terminal over the last 60 years has seen the demolition of more than 300 homes, realignment of the railway line (which is why the curve now makes rail squeal) realignment of Tydeman Road (formerly John St), and loss of around half of the shops and other businesses in the old Town Centre. Approaches to the new Stirling Bridge cut off the lower part of Harvest Road, and most of the remaining North Fremantle population, from the Town Centre. The dismemberment of North Fremantle had commenced in earnest. The only imperative driving the planning was to facilitate the fast movement of goods and vehicles. The needs of the local community for linkages, services and shops, were totally ignored. There was no reparation for the destruction, nor did any impact studies or community consultations precede it. The population loss saw the end of the Town of North Fremantle as an independent municipality in its own right, bringing about its absorption into the City of Fremantle.

In the spirit of Carmel we need to maintain our resistance to the forces that would sever our community even further with a North South freeway. The opportunity presented by the transfer of port operations to the Outer Harbour should be grasped to restore North Fremantle as an East West connected community. Carmel’s house, symbolic of her resistance, needs to be conserved for posterity.