We can’t visit London’s West End at the moment – but we can visit Freo’s West End, it’s right on our doorstep.

I grew to love Fremantle’s West End during my years studying at the University of Notre Dame Australia (UNDA) Fremantle Campus.

I enjoy the West End in the early morning light before the shops and businesses open or the tourists appear. You’ll see students wandering to lectures, coffees in hand.

After heavy rain you can see some of the magnificent buildings reflected in puddles. 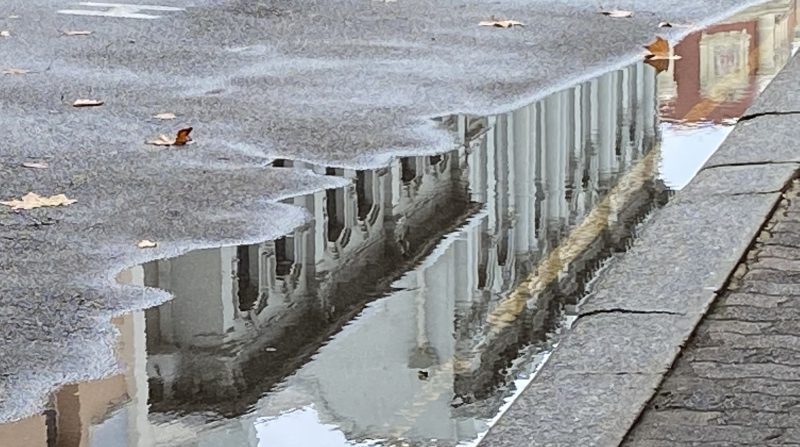 Fremantle West End Heritage area is a designated State heritage precinct since 2014. Its boundary starts across from the Railway Station, at the intersection of Phillimore and Market Streets, runs along Market Street to Collie Street, then along Marine Terrace to the railway line before finding its way back to the railway station. 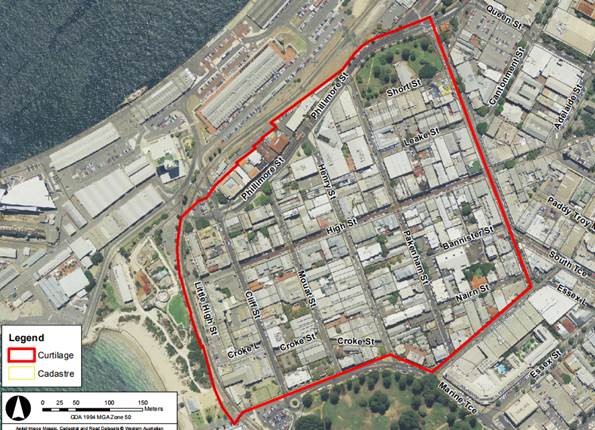 The area includes over 250 buildings and covers an area of approximately 20 hectares. The area is the largest ever addition to Western Australia’s heritage register. It is characterised by narrow streets, relatively small blocks and buildings of a similar size and style.

Most buildings are two to three stories high, were constructed in the 1890s and 1900s during the Gold Rush era and include former banks, hotels, warehouses, shipping companies and import-export businesses. During the Gold Rush, the streets of Fremantle were paved. Not with gold, but with 300,000 wooden jarrah blocks.

The West End dates back to 1829, when it became the port town of Fremantle for the new Swan River Colony. It was laid out in a grid system with High Street at the centre. I’m told that in the later years of the last century it was a bit run down until spruced up for the America’s Cup yacht race in Fremantle in 1987, and then had another major revamp in the early 1990s when UNDA restored and occupied many of the buildings in the West End.

These are a few of my favourite heritage buildings from the many to pick from. 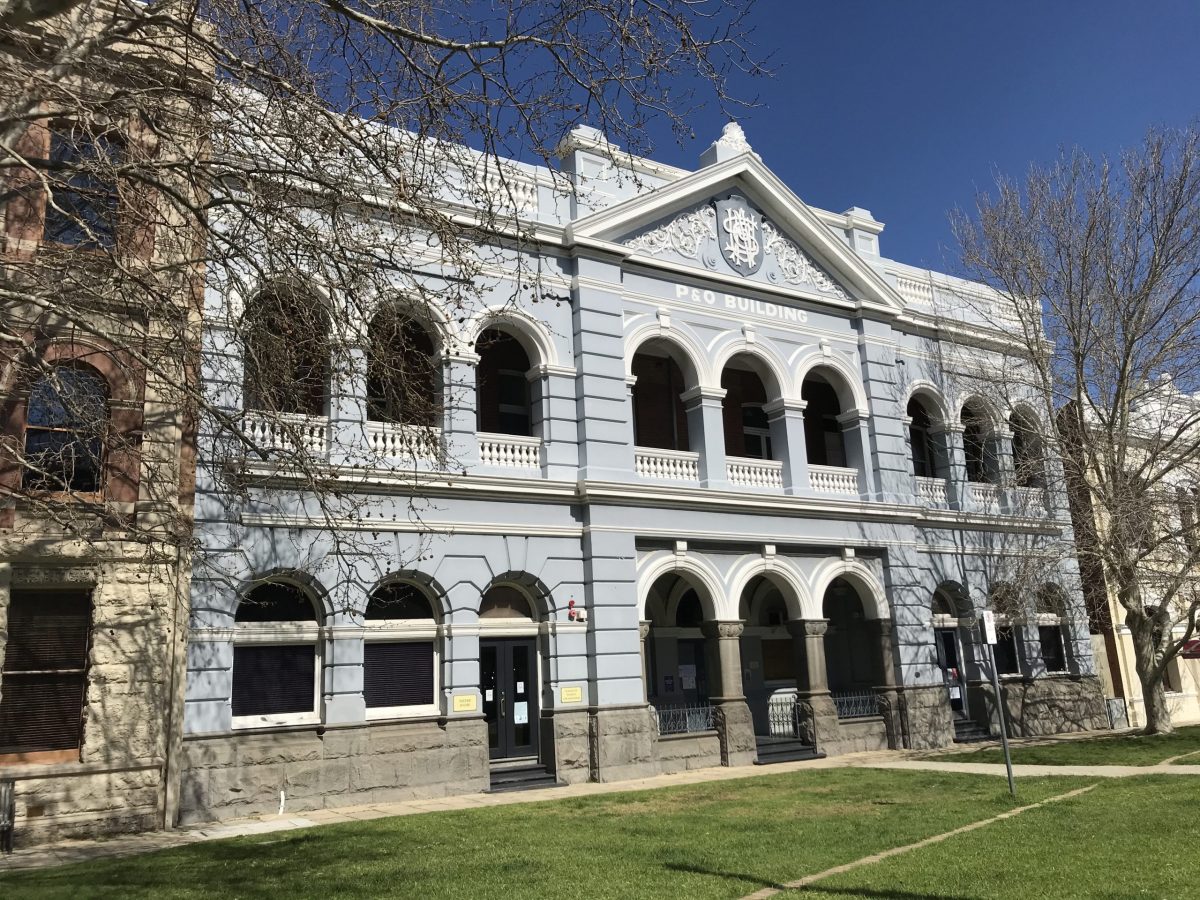 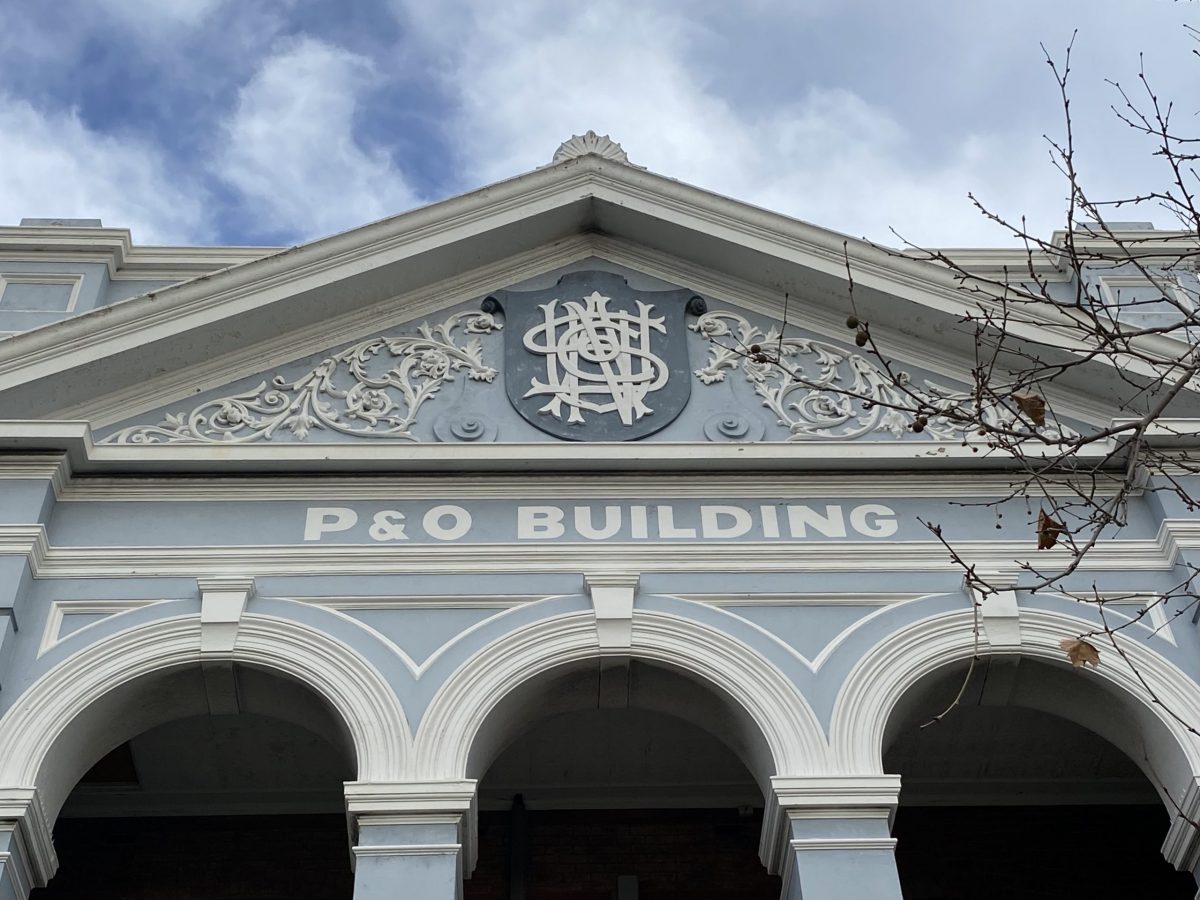 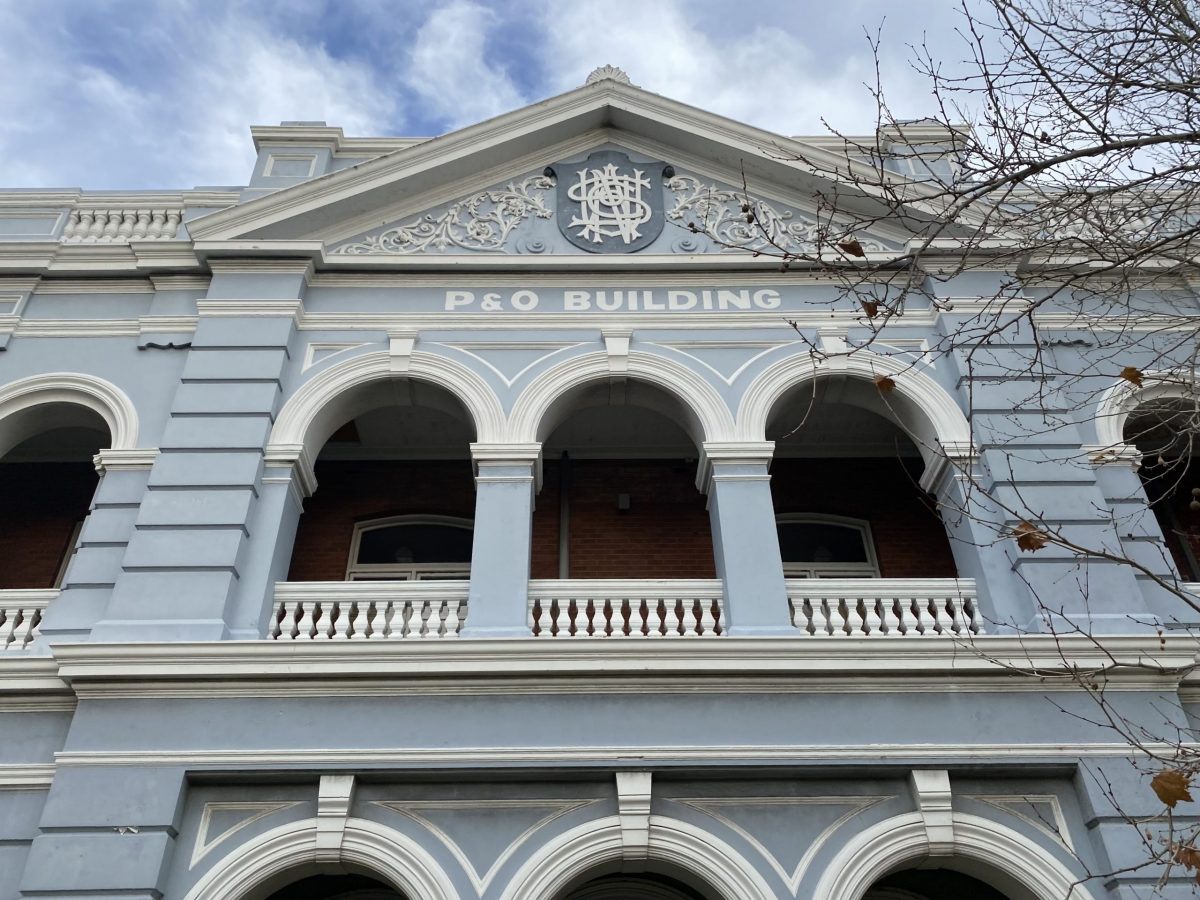 It’s painted baby blue and white. Blue and white are associated with the nursing profession. This tradition began with Florence Nightingale during the Crimea War. She and her nurses wore blue uniforms with white aprons. The former P&O Building was also known as the Australian Union Steamship Navigation Company building. It was built in 1903, when many shipping and transport companies acquired land in the area to build offices and warehouses. Built with brick and stone in the Federation Free Classic style, this building has a fantastic façade with arches and a large central pediment, imposing entrance porch and balustrading. The initials AUSNC, the initial owner can be seen on the pediment.

In recent years the Danish Consul and the shipping company Maersk has offices on the upper floor, while NDUA business school occupied the ground floor. UNDA spent $2.78 million refurbishing both the P&O and the neighbouring Howard Smith Building prior to moving in. The building is currently occupied by the School of Nursing and Midwifery of UNDA. 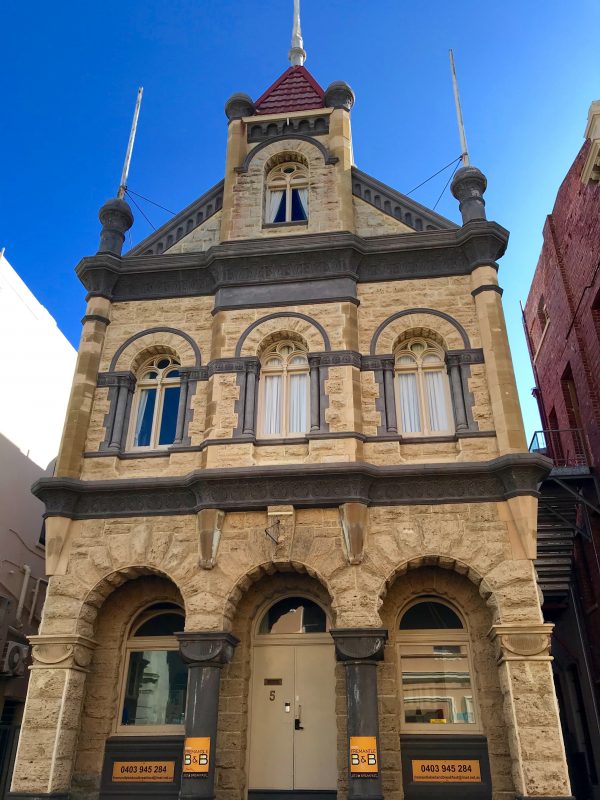 Here you’ll find one of the most picturesque buildings in Fremantle. It’s a three-storeys tall, skinny building, built in the Federation Romanesque style with rough-hewn limestone in 1902. The roof has a steep gable that is topped with an elaborate square turret with a steep pyramid roof. It has columns and decorative stonework, medieval motifs and is topped with flagpoles.

It began its life as a commercial premises and warehouse. The first tenant Laurman Ratazzi was a general merchant specialising in wine and spirits. He became the Imperial German Consul and later Italian consul. Prior to World War 1, it was rumoured that he spied on movements in Fremantle Harbour from an attic window. He was interned as an alien on Rottnest Island, as were all foreign nationals during WW1 hostilities. His company’s commercial activities were suspended. After the war the building was occupied by various shipping businesses.

In 1984, the new owner knocked down walls to make a dance floor and night club. Lots of Freo folk will remember this building as the Tarantella Night Club. They may even remember some wild nights they spent there. If these walls could talk! It’s currently a B&B. 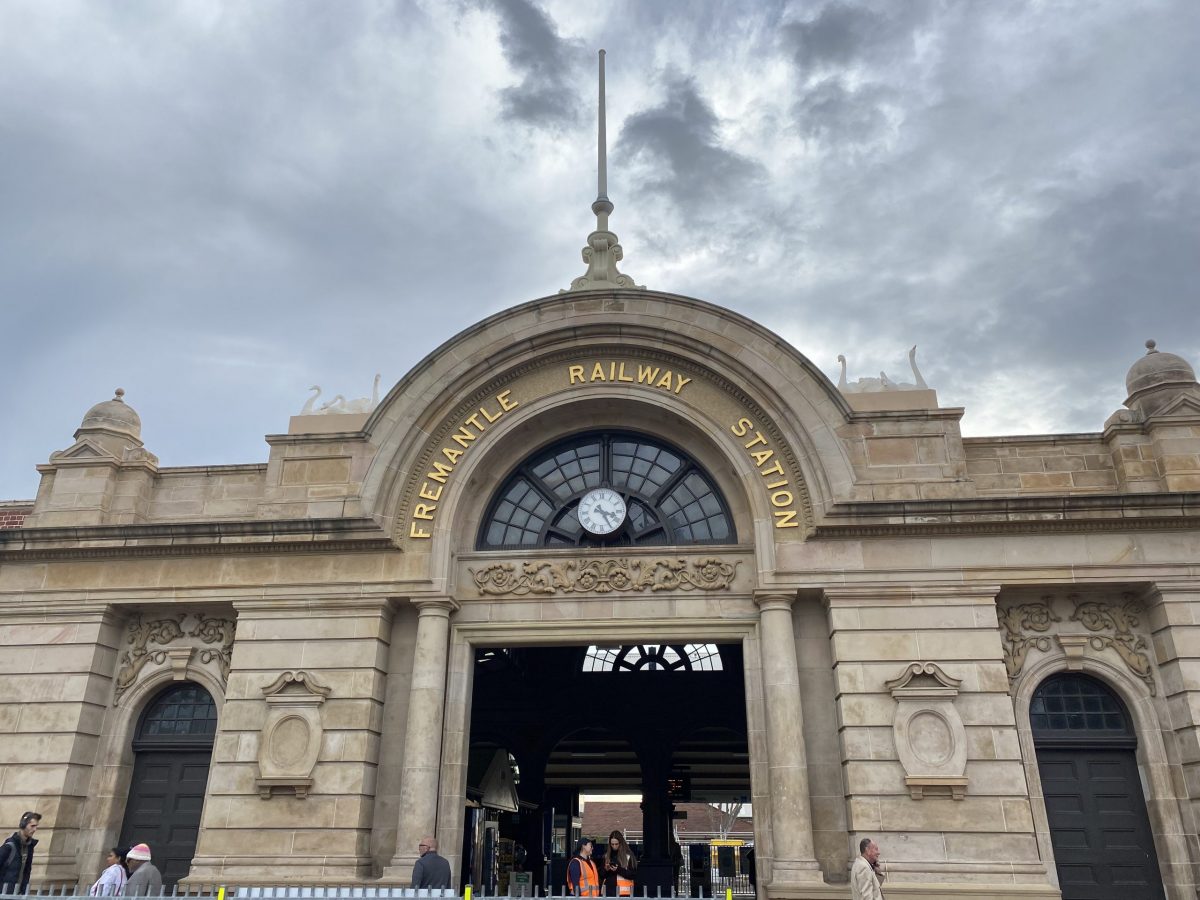 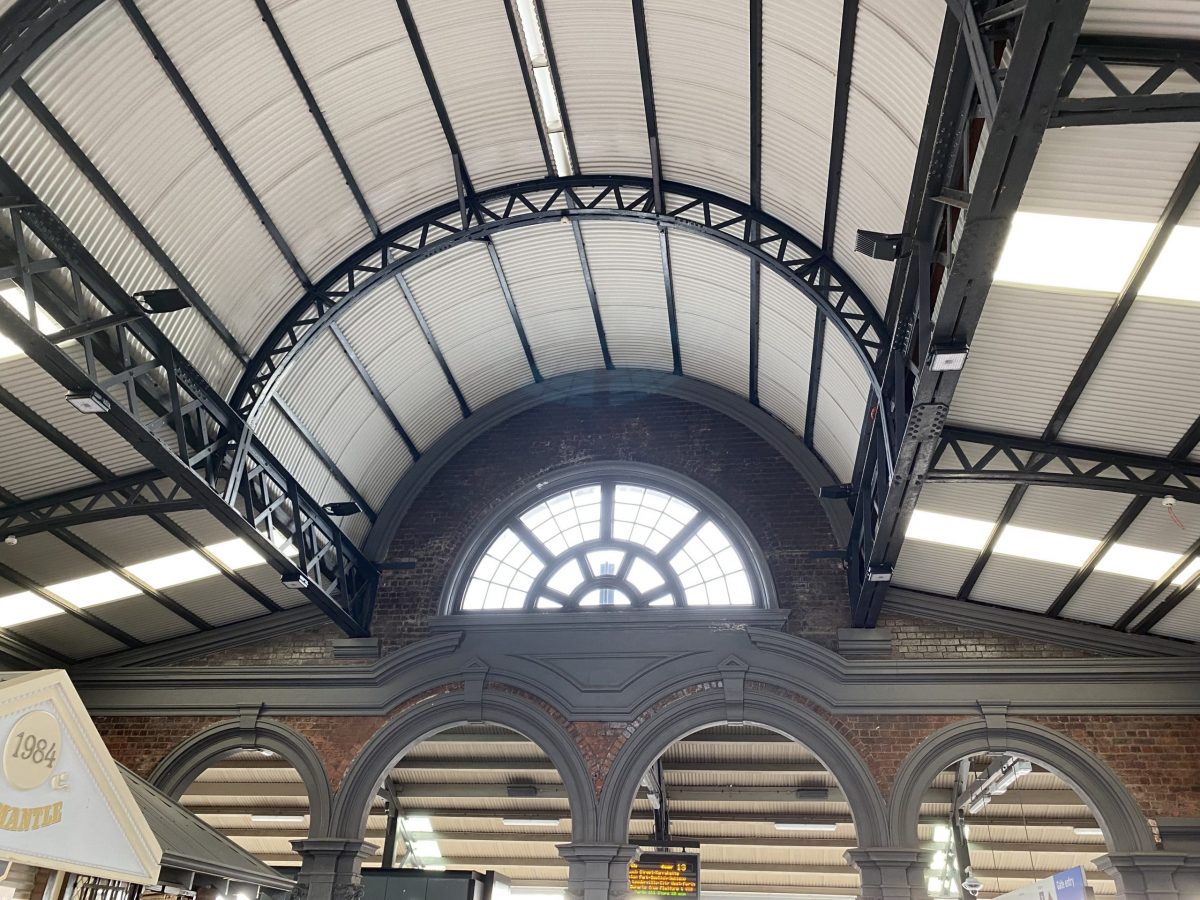 This is Fremantle’s third station and was completed in 1907. Built in the Federation Free Classical style – the station features Donnybrook stone construction on the façade with red brick infill panels and features a rare example of large train roof. It has white swans (not black) on either side of the roof. The station was closed between 1979 and 1983. Between 2005 and 2011, the station was restored and upgraded. Fremantle station featured in the 2006 movie ‘Last Train to Freo’. 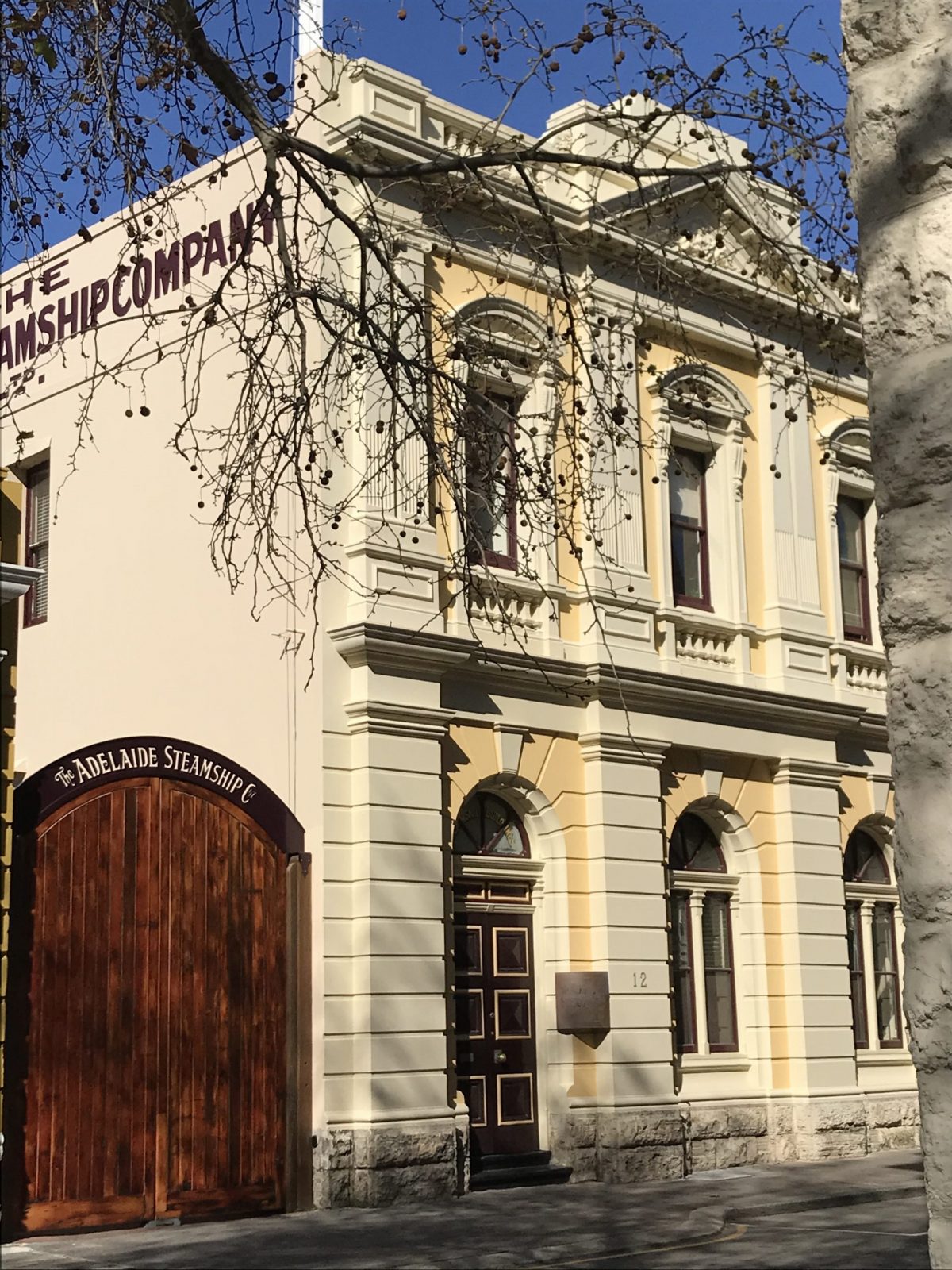 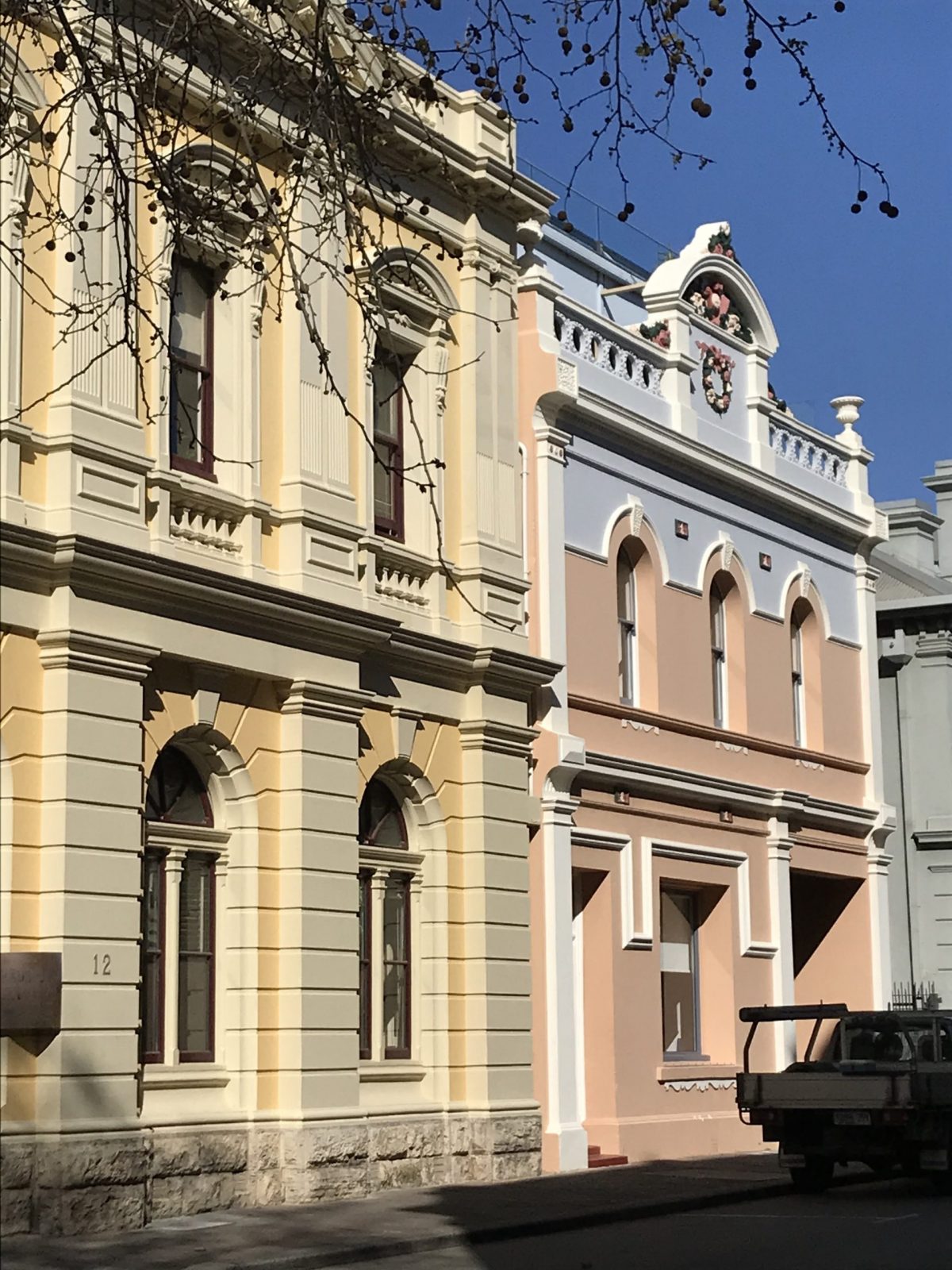 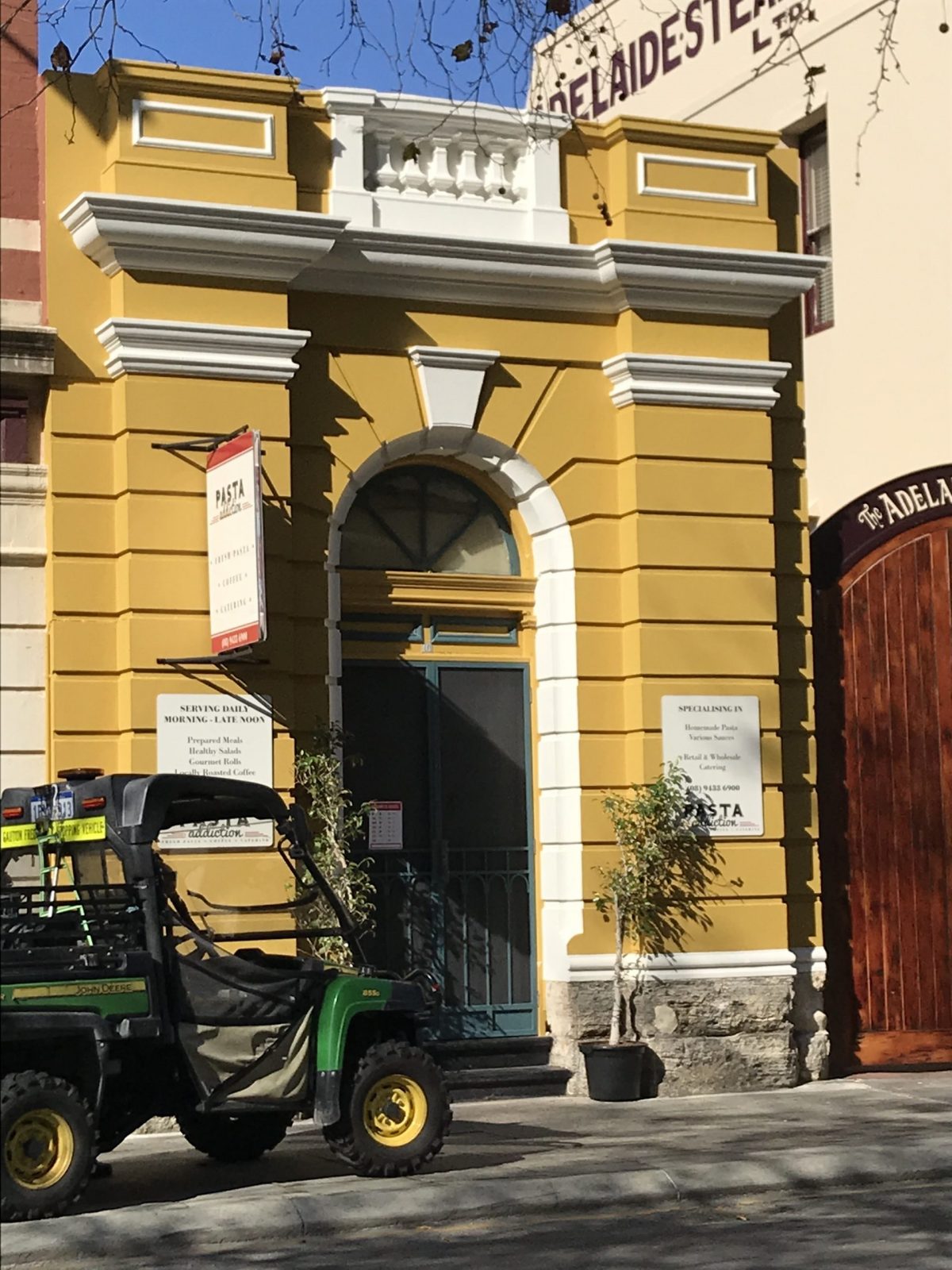 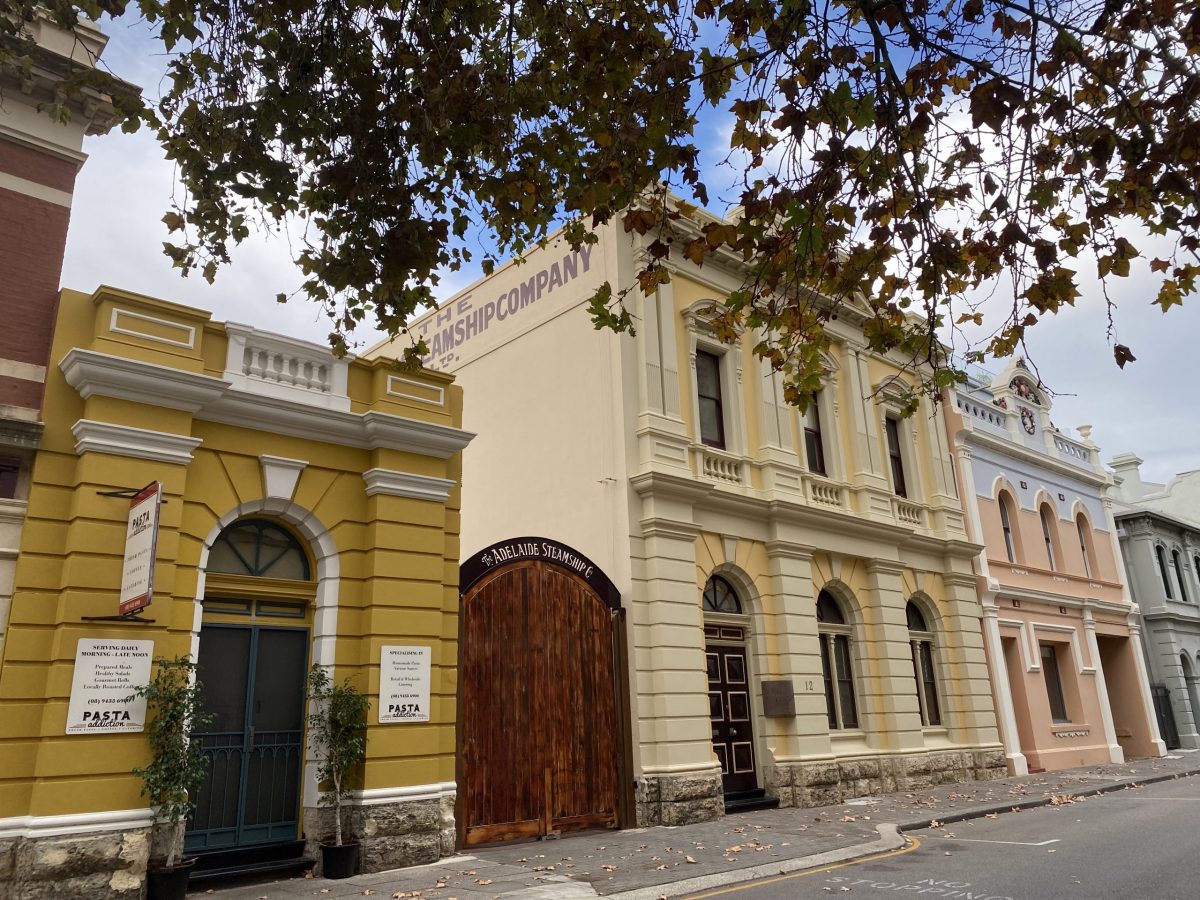 This two-storey stone building was built in 1900 in the Federation Free classical style for the Adelaide Steamship Company. It has an elaborate central pediment and stuccoed pilasters.

I love the colours of the buildings on this street. The Adelaide Steamship House is painted primrose yellow and white with the company’s name on the gable end and on the wooden door to the left of the building. 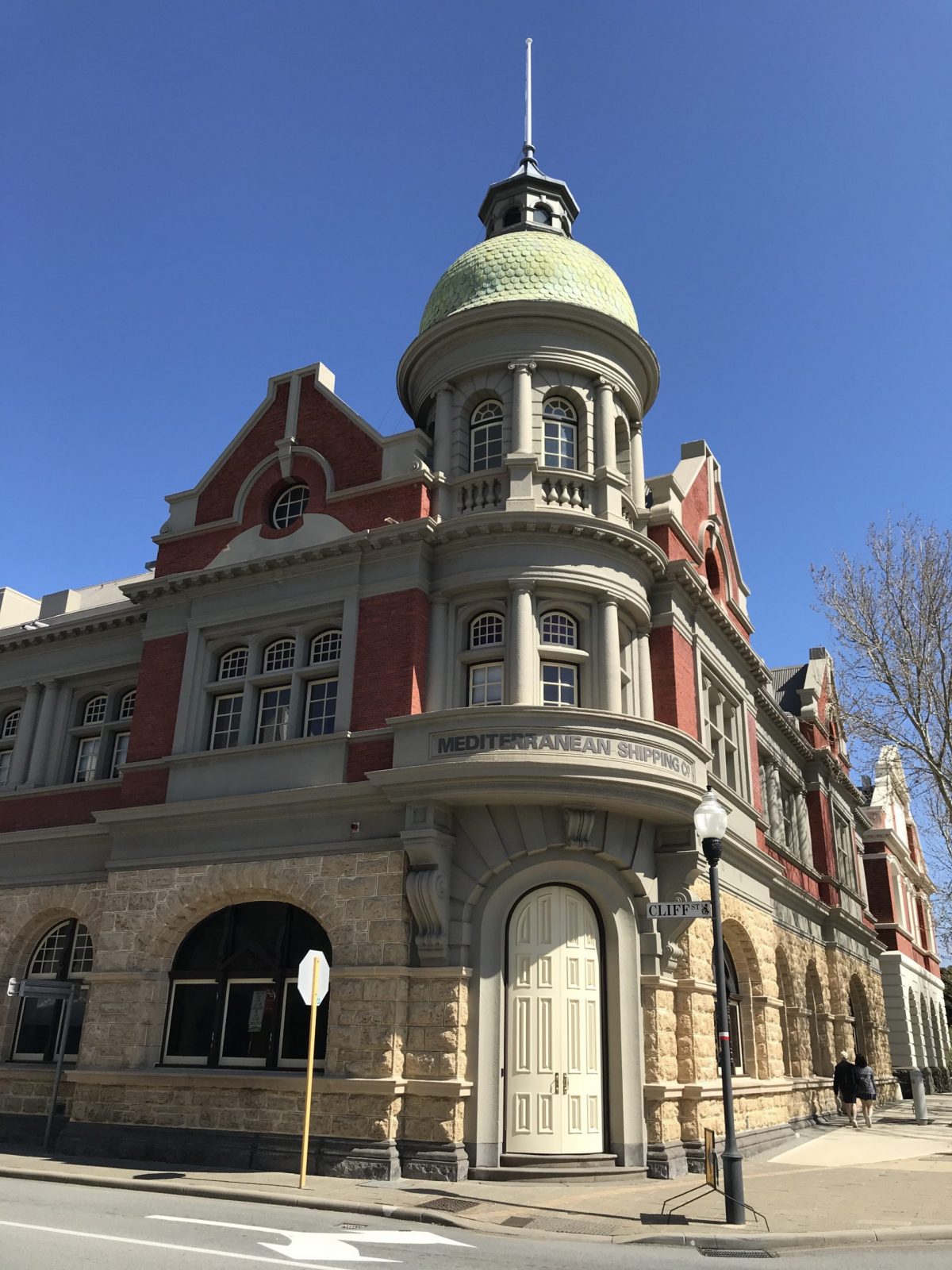 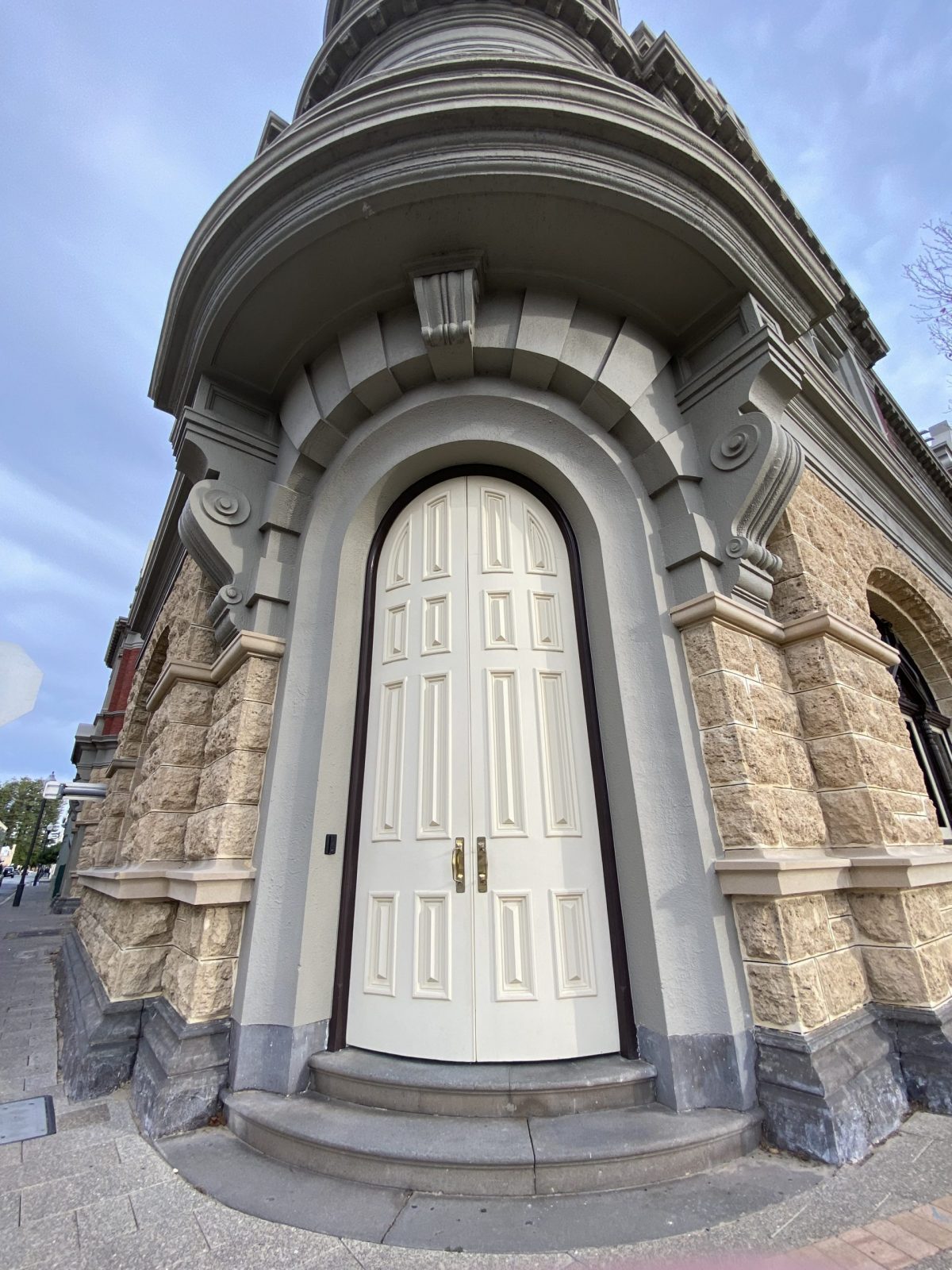 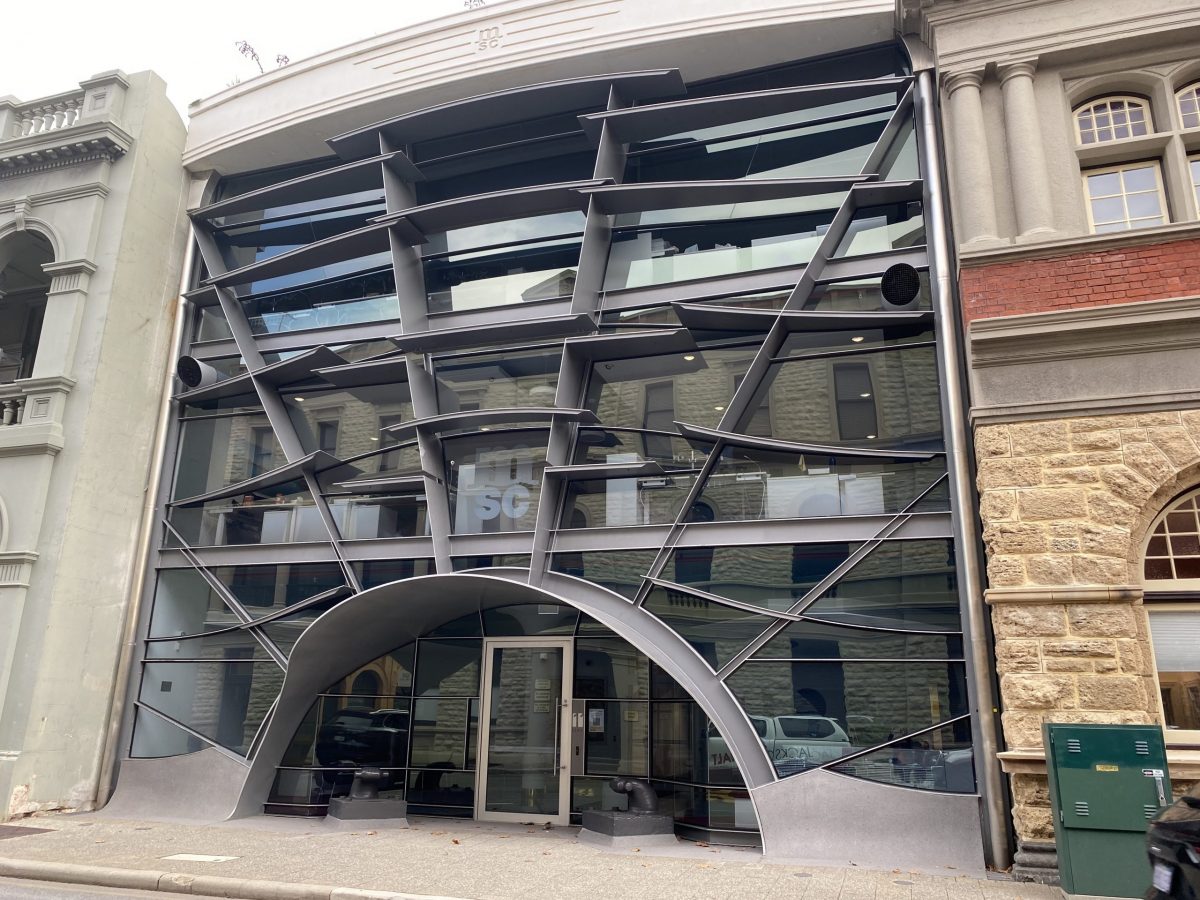 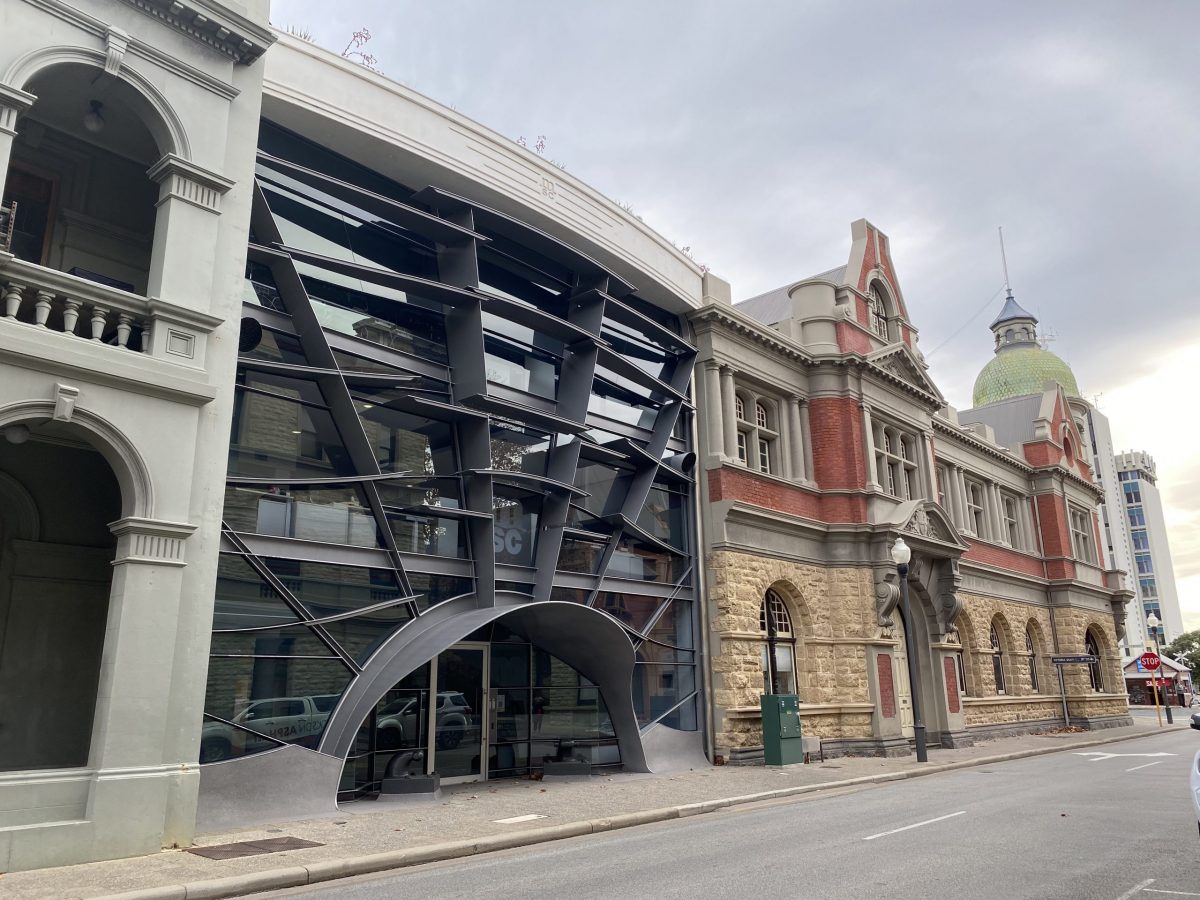 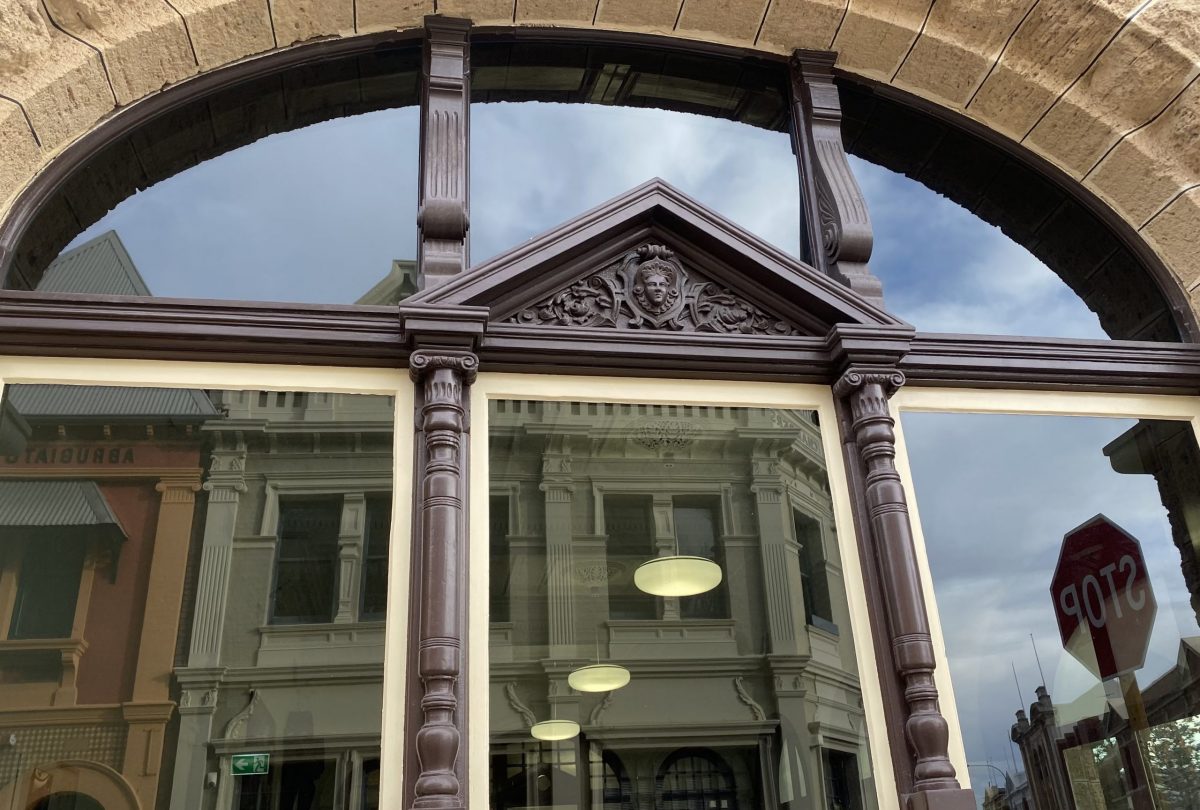 In 1900, Dalgety & Company bought land on Cliff Street, close to Fremantle’s new harbour and built this magnificent U-shaped building with bluestone from Melbourne and limestone from Cottesloe. It has gables, turrets, ornamental chimneys and a 21-metre tower with a gleaming green metal dome. It is clad with dragon’s scale copper. I also love the curved cream door and the ornate carvings on the windows.

It has been known as the Dalgety Building, Elders House, Barwill House and the Wilhelmsen Building.

It is now the Australian and New Zealand headquarters of the Mediterranean Shipping Company, the world’s largest privately-owned shipping line.

In 2011, MSC undertook a five-year meticulous heritage restoration and a striking modern addition costing $14.5 million. The modern building is all glass and steel sculpted like the rising sun. The glass reflects the buildings across the street. A perfect blend of old and new.

The buildings behind were demolished in 1967. The structure separates Cliff Street and a carpark. It is a favourite backdrop for wedding photos. 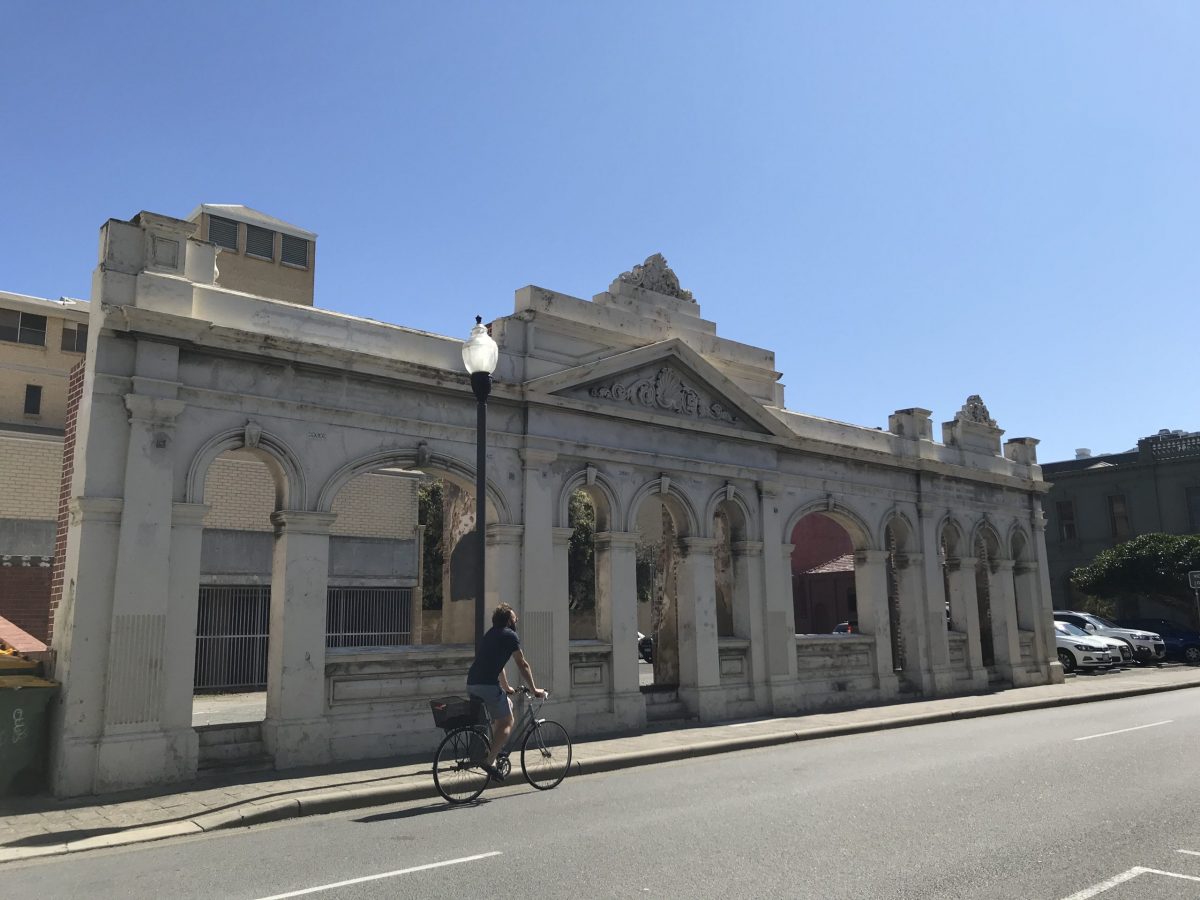 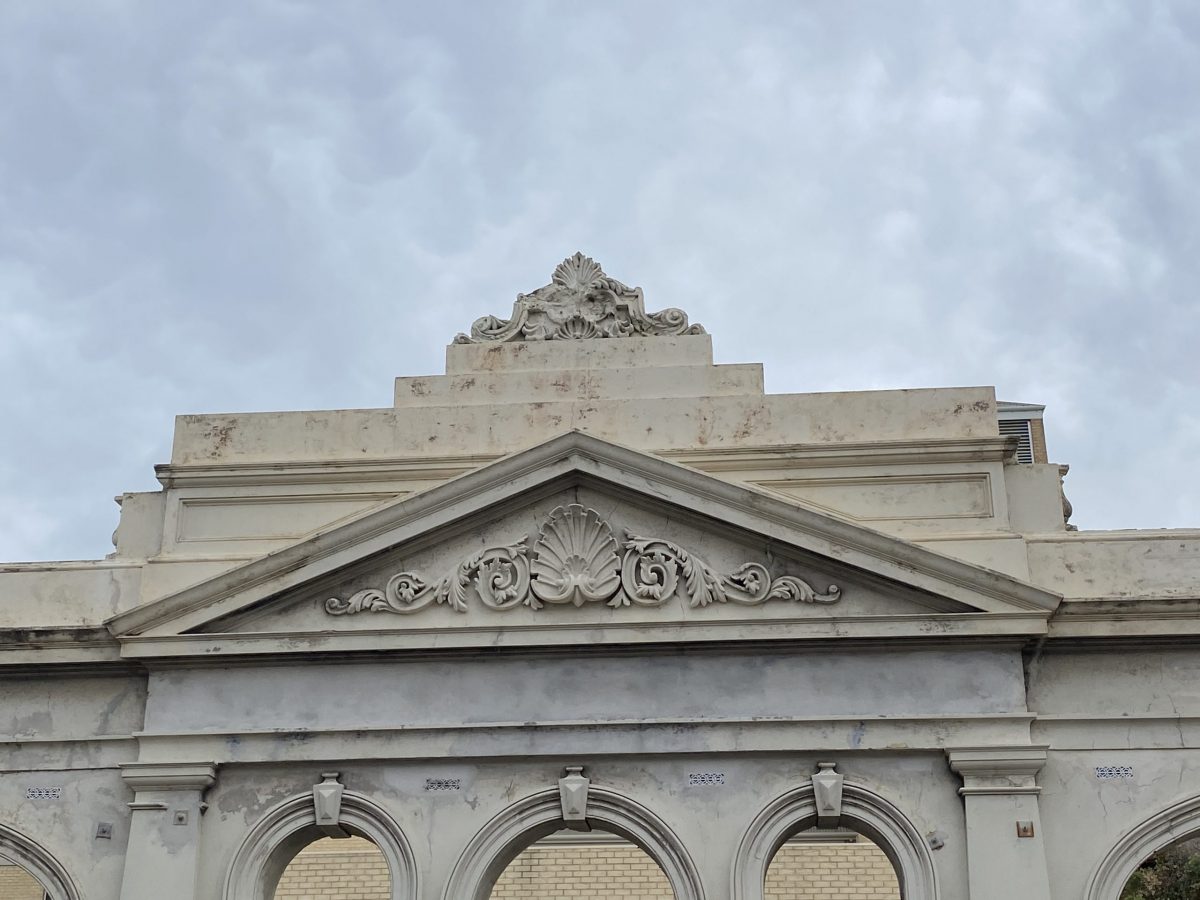 In the 1850s, Cliff Street was a busy thoroughfare connecting the sea front jetty with the river. Many businesses were located along the route. The street was paved with Yorkshire flagstones in 1858. The façade is also Federation Free classical style with zero set back from the pavement and gives an idea of what the street looked like back then.

Fremantle’s buildings have certainly evolved over the years – the streets are no longer paved in wood, the trams and horse drawn buggies are gone. But as you walk around the West End and look up at the names on the buildings, you get a feel for how it must have been.

* This article was written by Jean Hudson and the photographs were also taken by her.