By Philip Eaton,
Our Legal Correspondent

It took me less than an hour to walk around the external walls of Fremantle Prison. That included some dawdling to read a sign or gaze at a feature, such as an aged door or gate. I started at the junction of Parry and Knutsford Streets and walked towards Hampton Road, circumnavigating the Prison in a clockwise direction. 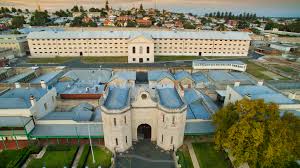 At the top of Knutsford Street, a small door and a modest sign indicate the presence of The Literature Centre. It is housed in what was the Prison Hospital. Formerly the Fremantle Children’s Literature Centre, the Centre is a not-for-profit organisation. 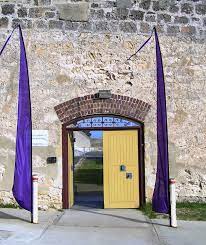 The northern, eastern and southern walls are largely featureless, apart from the occasional forbidding door or gate and guard box. A change in colour from off-white to grey along the top of the wall suggests that its height was increased at some point in its long history.

The longest of those three sections is the eastern, running parallel with Hampton Road. There is a roadside verge, then a footpath and a swathe of mown grass, about 25 metres wide, between the footpath and the Prison wall. That swathe is fenced off with ring-lock fencing running beside the footpath. The fence and locked gate suggest that the grassy swathe, with its 11 somewhat unevenly scattered trees is not available to the public. That struck me as curious because the northern and southern walls are bounded by Knutsford and Fothergill Streets allowing easy public access to those walls. The former is a residential Street and the latter is bounded by the rear of the Fremantle Hospital complex and the outskirts of Fremantle oval.

On closer investigation, I am informed that the grassy swathe is accessible to the public via gaps between the Prison wall and the fence. People, particularly those with dogs do venture onto the enclosed area. It was deserted when I walked past. 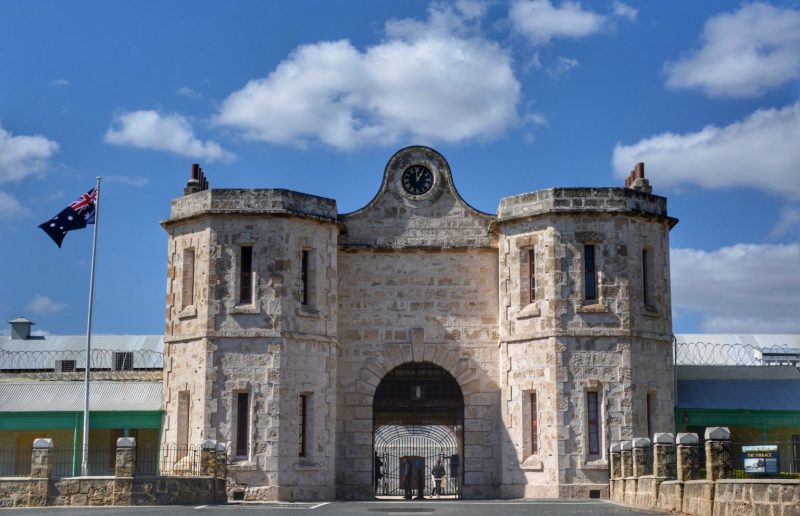 As walks go, those three sides are not very interesting. It all changed when I arrived at the western aspect, the front of the Prison with its impressive entrance flanked by historic buildings, looking west toward the port.

Near Knutsford Street on that aspect is the entrance to The Fremantle Prison Youth Hostel, part of the YHA Australia network of hostels throughout Australia. As with The Literature Centre, its presence is modestly sign posted. 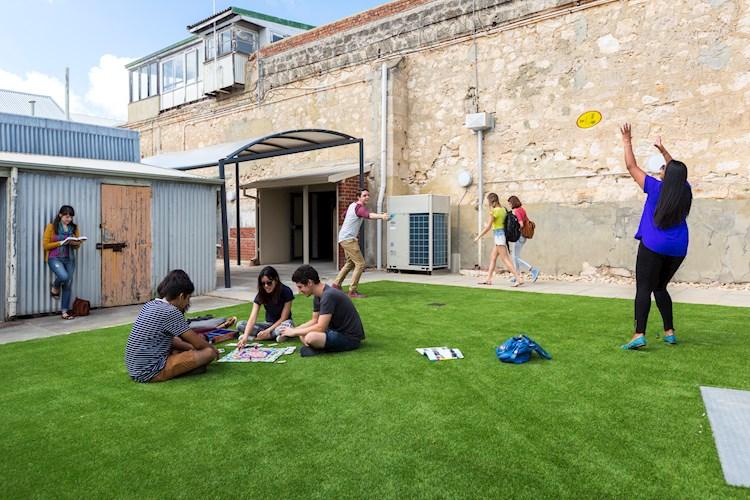 After poking around the gardens and walkways of those buildings, I made my way down to Parry Street. I walked down a flight of rather steep and unattractive metal stairs to the Council carpark and weaved through the vehicle traffic on a busy Easter Monday morning.

I walked from the corner of Knutsford and Parry Streets along the footpath in the direction of the oval. While doing so I kept glancing up at the Prison. It can barely be seen from street level, despite the fact that the Prison sits on the commanding heights of Fremantle. In part, that is because the bitumen carpark is made more amenable by a number of beautiful, well-established gum trees.

It occurred to me that Fremantle Prison, a World Heritage Site, and one of the many historic buildings for which Fremantle is well-known, presents a quandary in that it is, clearly, part of that historic fabric and yet, it is remote from the city. In part, that can be attributed to the very nature of a prison. They are designed to enclose and confine rather than to welcome those from outside its walls. 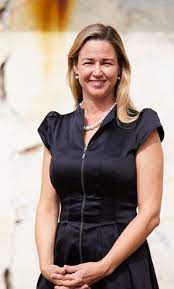 Paula Nelson, the enthusiastic manager of the Prison, has to deal with that, among many problems. She, with a relatively small paid workforce, and a dedicated band of volunteers, has the task of managing the 6.2 hectare site and its many buildings and visitation to it. COVID 19 has made that task significantly more difficult. One of the major attractions for tourists were guided tours of the Prison’s tunnels. In the context of the pandemic, the limited movement of air in the tunnels led to the cessation of tours for public health reasons. Another associated contributor has been the absence of cruise ships visiting Fremantle. There has been an increase in home-grown visitation and school groups are regulars during school terms.

Paula Nelson is grappling with the problems of making the Prison more of an attraction in a challenging environment. She has in mind, for example, a sound and light show, utilizing its vast areas of walls.

As mentioned, the only ready access for visitors wishing to explore the prison is through the main gate on the western side. Pedestrian and vehicle access is not easy and, as I mentioned, the Prison gates and associated buildings are almost invisible from a stroll along Parry Street. The carparks in the upper and lower levels are not part of the Prison site. They fall under the control of the City of Fremantle. The Prison is under the control of the Department of Planning, Lands and Heritage. The problem of improving the physical and visual links between the Prison and the city is one that will involve both the State government and the City of Fremantle and significant expense. Andrew Sullivan, Deputy Mayor of Fremantle (at the time when I spoke to him) points to the many heritage buildings within the City of Fremantle and the many demands on the City’s revenues. Paula Nelson is well aware of the problem of funding ongoing maintenance. The Prison and its walls comprise about 20 separate buildings, almost all built in the 19th or early twentieth century. Many of the buildings and almost all of the walls were built from limestone quarried at the site. My walk around the outskirts revealed to my non-expert eye the ravages of time and weather. Inside those walls there is much to be done to maintain or refurbish floor boards, ceilings, plumbing and electrical wiring.

It’s easy to be pessimistic about the Prison. It’s a grim place with a grim history. There are many challenges, not just the improvement of the physical and visual connection between the Prison and the city, but in increasing the sense of ownership and involvement within the Fremantle community. There was a time when those inside needed to tunnel under or climb over the walls to get out. The challenge now is to find new ways of getting in, not just in a physical sense but on a spiritual and aesthetic level. The city has a thriving and innovative cultural life. The Prison has hosted concerts and dramatic performances and has its own art gallery. It may be that it will be in those areas that the Prison becomes more integrated into the community in which it, presently, rather sullenly sits. The sound and light show envisaged by Paula Nelson sits very neatly into that cultural scenario. The heritage requirements of the site are, of course, paramount but for the Prison to be more than a grim monument to a harsh and occasionally brutal penal system, ways should be found to give it another, more vital and thriving presence in the community.

Perhaps the Prison may have a role in the hospitality industry. As I’ve noted, it already does. The presence of the YHA hostel is not prominent to a casual visitor like me but you can find it, complete with photographs and reviews on the likes of Wotif and Tripadvisor. There are already a number of very fine hospitality establishments – B and B’s, hotels, small and large, and the like not far from the Prison. There are more on the drawing boards. It may be that the Prison has a role to play in that scenario. The pandemic has its own challenges but we will settle down to a new and different normal. The Prison can be part of that new normal but only if innovation and creativity allow it to be more than a gradually deteriorating monument.

* This article was written by Philip Eaton